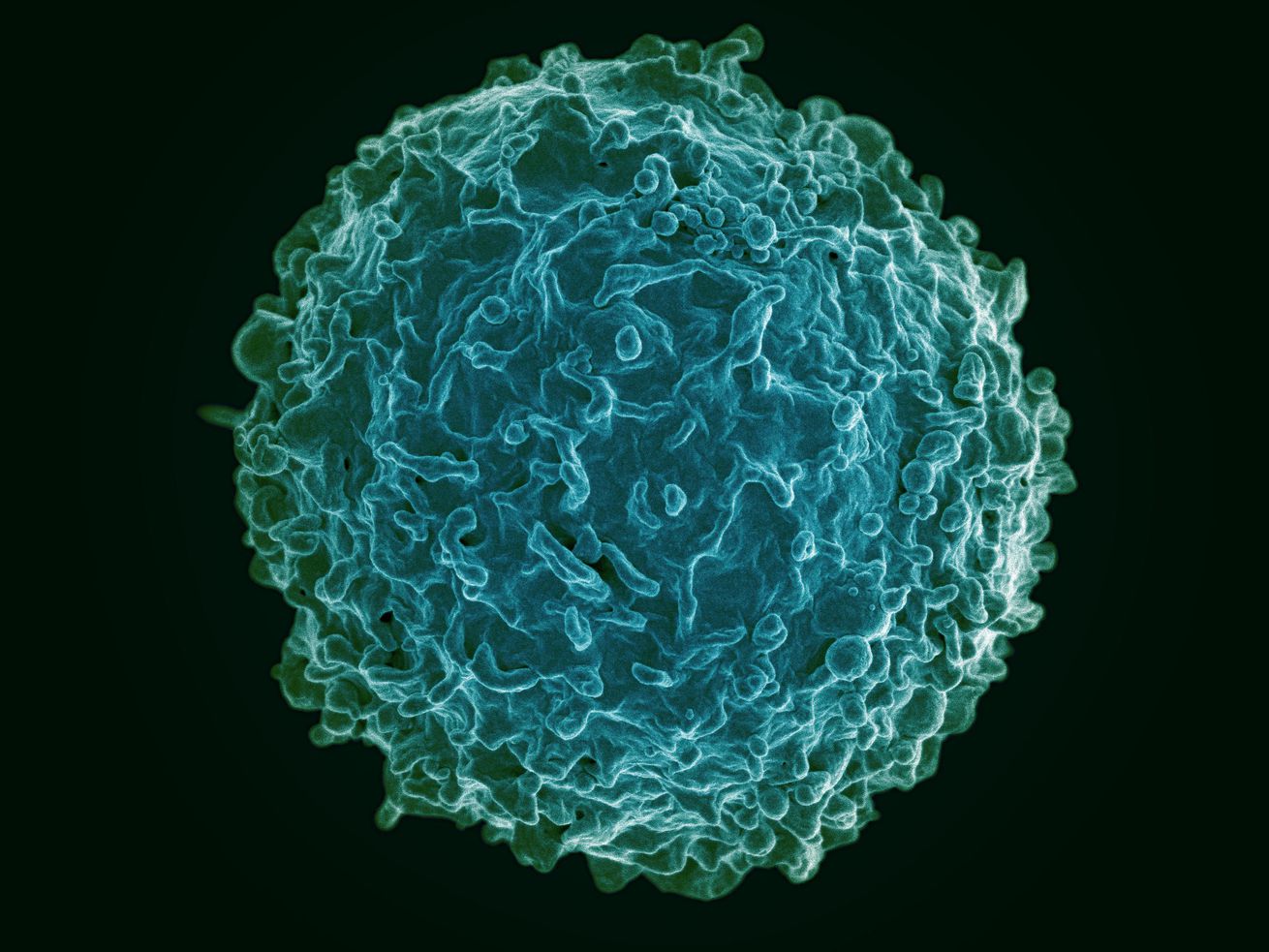 A human B-cell. These are the immune system cells that make antibodies. | NIAID

A 25-year-old man in Nevada was confirmed to be reinfected with Covid-19.

Researchers at the University of Nevada have reported that a 25-year-old man was reinfected in June with SARS-CoV-2, the virus the causes Covid-19. It joins a handful of other confirmed cases of reinfection in people without immune disorders — from Belgium, the Netherlands, Hong Kong, and Ecuador — where researchers have demonstrated that the genetic signature of the second infection did not match that of the first.

The report is in line with what immunity experts have been telling us is possible with this virus: that reinfection is possible, and to some extent, expected, with a coronavirus. But it also shows us how much we still have to learn: About how much protection a single infection can confer, about what exactly a robust long-duration immune response looks like, and about what determines the severity of disease in a second infection.

“Does immunity protect an individual from disease on reinfection?” writes Yale immunology researcher Akiko Iwasaki in an accompanying editorial in The Lancet Infectious Diseases. “The answer is not necessarily, because patients from Nevada and Ecuador had worse disease outcomes at reinfection than at first infection.”

The Nevada case is an important finding, since in the two other confirmed cases of reinfection, the patients had mild disease or were asymptomatic. Scientists still don’t know how common reinfection is (it very well may be rare), nor can they determine an individual’s chances of getting infected again.

They do know there are many, many components of our immune system that work together to fight the coronavirus, and immunity doesn’t mean one single thing. And while we’re waiting for scientists to figure it all out, everyone, including those who’ve already had the virus, should still try to avoid getting infected at all.

The new study “strongly suggests that individuals who have tested positive for SARS-CoV-2 should continue to take serious precautions when it comes to the virus, including social distancing, wearing face masks, and handwashing,” said Mark Pandori, of the Nevada State Public Health Laboratory at the University of Nevada, Reno School of Medicine and lead author of the study, in a statement.

Let’s walk through the basics of immunity, and what we’re learning about reinfection.

There are no simple stories about immunity and Covid-19

The immune system is profoundly complicated, and “immunity” can mean many different things. A lot of this nuance gets lost in headlines about immunity.

For instance: Previous research has shown that neutralizing antibodies — immune system proteins that latch onto pathogens and prevent them from infecting cells — can wane in the months after a Covid-19 infection, particularly when the initial infection was mild. Some wondered if that meant the end of herd immunity hopes.

In the Nevada case, we know that “the patient had positive antibodies after the reinfection, but whether he had pre-existing antibody after the first infection is unknown,” writes Iwasaki.

But what’s often misunderstood is that antibodies are only one component of the immune system, and losing them does not leave a person completely vulnerable to the virus.

In fact, there are several parts of the immune system that may contribute to lasting protection against SARS-CoV-2.

One is killer T-cells. “Their names give you a good hint what they do,” Alessandro Sette, an immunologist at the La Jolla Institute for Immunology, told me in July. “They see and destroy and kill infected cells.”

Antibodies, he explained, can clear virus from bodily fluids. “But if the virus gets inside the cell, then it becomes invisible to the antibody.” That’s where killer T-cells come in: They find and destroy these hidden viruses.

While antibodies can prevent an infection, killer T-cells deal with an infection that’s already underway. So they play a huge role in long-term immunity, stopping infections before they have time to get a person very sick.

And it’s not just killer T-cells and antibodies. There are also helper T-cells, which facilitate a robust antibody cell response. “They are required for the antibody response to mature,” Sette says.

Some proportion of the population (perhaps 25 to 50 percent of people) seem to have some preexisting T-cells (of both varieties, but the helper kind have been more commonly observed) that respond to SARS-CoV-2, despite these people never having been exposed to SARS-CoV-2. The hypothesis is that these people may have acquired these T-cells from being infected with other strains in the coronavirus family of viruses. Researchers still don’t really understand what role these preexisting T-cells play in preventing or attenuating infection (if any).

But wait, there’s more! There’s another group of cells called memory B-cells. B-cells are the immune system cells that create antibodies. Certain types of B-cells become memory B-cells. These save the instructions for producing a particular antibody, but they aren’t active. Instead, they hide out — in your spleen, in your lymph nodes, perhaps at the original site of your infection — waiting for a signal to start producing antibodies again.

All the things “immunity” can mean

All these different components of the immune system mean “immunity” isn’t just one thing.

Immunity could mean a strong antibody response, which prevents the virus from establishing itself in cells. But it could also mean a good killer T-cell response, which could potentially stop an infection very quickly: before you feel sick and before you start spreading the virus to others.

“In many infections, the virus does reproduce a little bit, but then the immune response stops this infection in its tracks,” Sette explains. Also possible: “You do get infected, you do get sick, but your immune system does enough of a job curbing the infection, so you don’t get as sick.”

Immunity might also result from an awakening of memory B-cells. If an individual has memory B-cells and is exposed to the virus again, “that infection will stimulate a much faster antibody response to the virus, which would, theoretically lead to faster clearance of the virus and potentially less severe infection,” Elitza Theel, the director of the infectious diseases serology laboratory at the Mayo Clinic, said in a July interview.

In general, scientists believe, the stronger the infection (and immune response) that occurs during an initial infection, the longer immunity will last.

So reinfection may still be possible, but it may not mean severe illness. When a virus invades a body, generally, the body remembers.

It’s still not known what the latest reinfection study means for how long the pandemic will last. If reinfections happen regularly (and we have no idea how common they might be), then it might take longer to achieve herd immunity without a vaccination (which is an un-ideal, and cynical, goal to begin with). How long immunity lasts, on average, and how common reinfection is are key unknown variables in figuring out how long the pandemic may last in the absence of an effective vaccine or treatment.

“Reinfection cases tell us that we cannot rely on immunity acquired by natural infection to confer herd immunity; not only is this strategy lethal for many but also it is not effective,” Iwasaki wrote in the editorial. “Herd immunity requires safe and effective vaccines and robust vaccination implementation.”

We also have much more to learn about how often reinfections lead to more clusters of cases. Recently, I asked Shane Crotty, an immunologist at the La Jolla Institute for Immunology, about this very scenario.

“Could there be an ‘immunity’ scenario,” I asked, “where, after having recovered from Covid, a person could get infected again but not feel sick at all, and also be able to spread it?”

“It is a good question, and the answer is that no one knows,” Crotty replied. “There are cases with other diseases where asymptomatic immune people can be infectious. There is definitely a lot to learn still about immunity to SARS-CoV-2.”

In the spring, we launched a program asking readers for financial contributions to help keep Vox free for everyone, and last week, we set a goal of reaching 20,000 contributors. Well, you helped us blow past that. Today, we are extending that goal to 25,000. Millions turn to Vox each month to understand an increasingly chaotic world — from what is happening with the USPS to the coronavirus crisis to what is, quite possibly, the most consequential presidential election of our lifetimes. Even when the economy and the news advertising market recovers, your support will be a critical part of sustaining our resource-intensive work — and helping everyone make sense of an increasingly chaotic world. Contribute today from as little as $3.