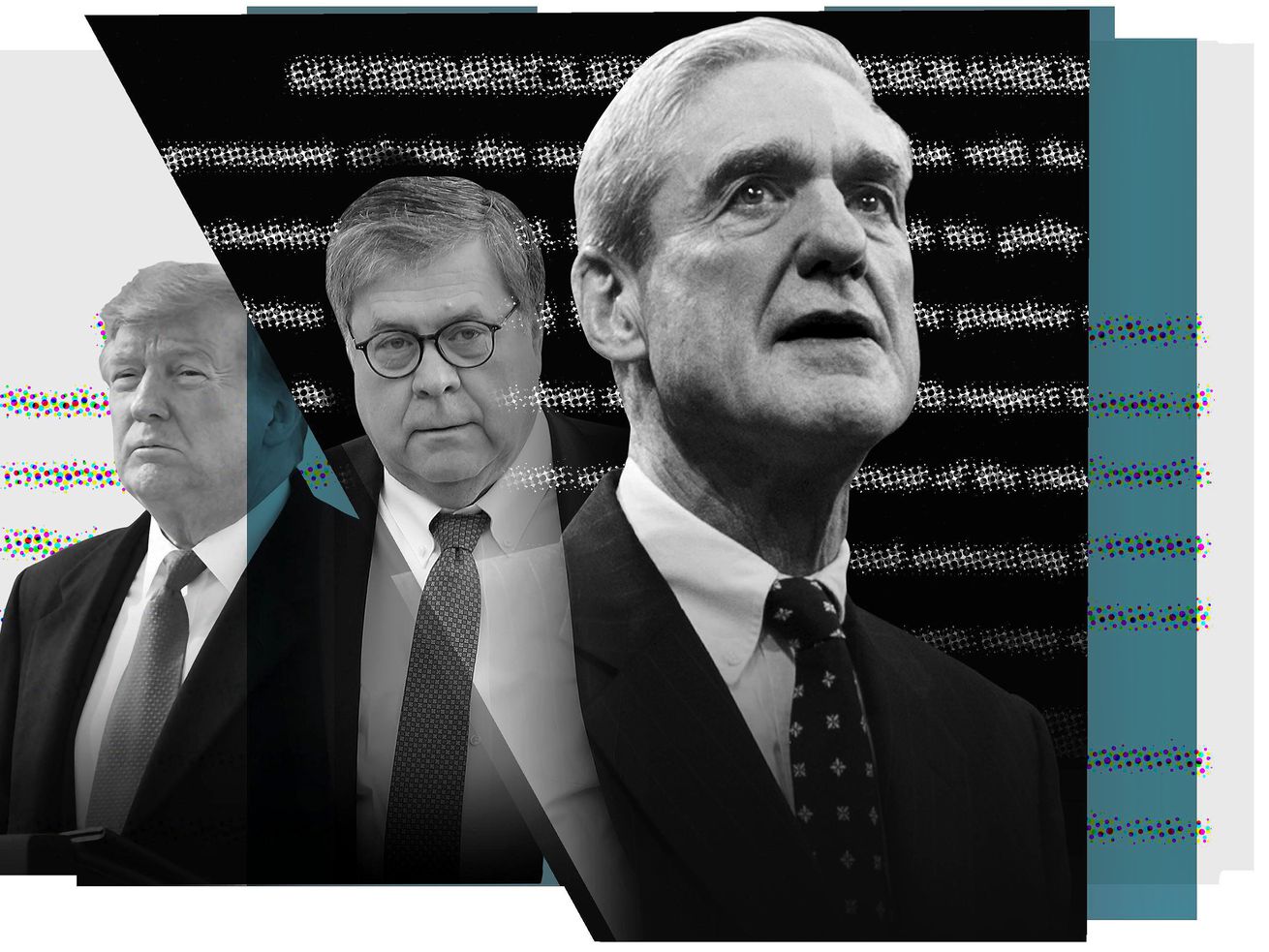 Disputes over the handling of the Trump obstruction investigation have spilled into public view.

Major disagreements between Robert Mueller and Attorney General William Barr have spilled out into public this week, with the dispute focusing on the handling of the investigation of President Trump for potential obstruction of justice.

On Wednesday, Mueller announced his resignation and made his first-ever public statement on the investigation, giving a summary of his conclusions that was conspicuously different from Barr’s. After that, Barr responded, defending his own decisions in an hour-long interview with CBS This Morning.

Discrepancies between Barr and Mueller have simmered for some time. Barr’s initial letter describing Mueller’s findings gave a starkly incomplete picture that seemed much rosier for Trump than the full report. And he has since adopted Trump’s line that the investigation found “there was in fact no collusion.” (Mueller says there was “insufficient evidence to charge a broader conspiracy.”)

But the heart of the current dispute relates to the highly unusual way the obstruction investigation wrapped up — with Mueller deciding not to reach a conclusion on whether Trump broke the law, and with Barr then deciding to reach the conclusion that he didn’t.

Barr is now taking aim at several of Mueller’s choices. He says Mueller “could’ve reached a decision” on whether Trump committed crimes. He says he disagrees with Mueller’s application of obstruction statutes to certain of Trump’s acts. And he says that even if you accept Mueller’s interpretation of obstruction law, the evidence against Trump was “deficient” in every single episode.

Tasked with investigating President Trump for potentially attempting to obstruct the Russia investigation, Mueller conducted a thorough investigation into 11 particular “episodes” involving the president (including the firing of James Comey as FBI director, Trump’s conduct toward witnesses like Paul Manafort and Michael Cohen, and Trump’s attempts to dismiss Mueller himself).

But Mueller also determined that he could not indict a sitting president because of existing Justice Department policy. “Charging the President with a crime was therefore not an option we could consider,” he said this week.

Still: even if Mueller couldn’t charge Trump, it seemed at least possible that he would wrap up his investigation with a judgment on whether the president broke the law.

So it came as a surprise to many when he chose not to do that. “We concluded that we would not reach a determination, one way or the other, about whether the president committed a crime,” Mueller said Wednesday. In part, his report explains, this is because it would be unfair to accuse the president of a crime when he can’t be charged and have the opportunity to clear his name at trial.

What Mueller did instead was lay out evidence and analysis about each of the potentially obstructive episodes involving Trump. Specifically, he examined whether Trump’s actions in each case met three elements common to obstruction statutes: 1) whether they were obstructive acts, 2) whether they had a nexus to an official proceeding, and 3) whether there was corrupt intent.

Often, Mueller’s analysis seemed quite damning. For some of the episodes, he said there was “substantial” evidence that all three of those elements applied; for others, his assessment was more mixed. But he never took the final step of clearly saying Trump broke the law or committed a crime in any instance.

Yet in one last twist, Mueller also said that if he had “confidence” that Trump “clearly did not commit obstruction of justice,” he would say so — and that he is “unable to reach that judgment.” So he implied that, at the very least, Trump’s conduct wasn’t obviously innocent.

As Mueller was wrapping up his work in March, he informed the Justice Department and its new attorney general, Barr, that he wouldn’t reach a judgment on whether Trump obstructed justice.

Barr has testified that he was “frankly surprised” to hear this, and he told CBS this week that he didn’t agree with that call. “He could’ve reached a conclusion. The opinion says you cannot indict a president while he is in office but he could’ve reached a decision as to whether it was criminal activity,” Barr said.

Then Mueller may have been surprised at what Barr did next — he decided to step into the void and issue his own conclusion on Trump’s conduct.

Barr says he worked with Deputy Attorney General Rod Rosenstein and other Justice Department lawyers on this, and that there were two parts to their analysis.

First, he says, he offered up a different interpretation of how the obstruction statutes could be applied to Trump’s actions.

Barr said that, for instance, the president’s firing of an FBI director is a “facially valid exercise of core presidential authority,” so the obstruction of justice statutes shouldn’t apply to it. (He made a similar argument last year in a memo before he got the attorney general job.)

Second, though, he says, he didn’t just “rely on” his team’s alternate interpretation of how the obstruction statutes should be applied — he also examined whether, under Mueller’s interpretation of the obstruction laws, Trump’s actions in any instance satisfied all three elements of the statute (that they were obstructive acts, that they had a nexus to an official proceeding, and that they were done with corrupt intent).

For every single one, Barr said, “we thought long and hard about it, we looked at the facts and we didn’t feel the government could establish obstruction.”

It’s certainly a convenient conclusion for Trump. And it’s curious that we actually haven’t seen any of Barr’s analysis on these topics, beyond his brief letter to Congress.

What are Barr’s responses to the seemingly damning analysis Mueller gave about certain episodes? Did he in fact think “long and hard” about it and seriously study Mueller’s evidence and arguments? Or was it more of a hasty “nothing to see here” whitewash?

How can a president be held accountable for lawbreaking?

Looming over all this are the tremendously important issues of what is to be done when the president of the United States may have committed criminal wrongdoing — and whether the president is in fact above the law.

Currently, there’s no easy answer to this within the US government. The Justice Department, which is charged with investigating and enforcing federal law, is to at least some extent subordinate to the president and run by his appointees. And DOJ has taken the position that it cannot indict a sitting president.

Congress, meanwhile, has the constitutional authority to impeach and remove a president. But it doesn’t really have the ability or expertise to conduct a serious criminal investigation.

Now, Mueller’s role as a Justice Department special counsel required him to submit “a confidential report explaining the prosecution or declination decisions reached” to the attorney general (not to Congress).

Still, some have speculated that Mueller may have truly intended his report for Congress to act on. Under this interpretation, Mueller gathered facts and did the analysis, but one reason for his refusal to take the final step and say that Trump’s conduct was criminal was because he believed that was Congress’s job.

Mueller has never outright said he intended any such thing. But in his remarks Wednesday, the special counsel did mention how “the Constitution requires a process other than the criminal justice system to formally accuse a sitting President of wrongdoing.”

Barr, however, recoiled at this very concept “The Department of Justice doesn’t use our powers of investigating crimes as an adjunct to Congress,” he told CBS. “Congress is a separate branch of government and they can, you know, they have processes, we have our processes. Ours are related to the criminal justice process. We are not an extension of Congress’s investigative powers.”

And these arguments aren’t baseless. Mueller had no actual obligation or authority under the law to give his final report to Congress, and certainly not to make an impeachment referral. Barr’s critique is that Mueller was a Justice Department special counsel investigating violations of federal criminal law. And the impeachment process has nothing to do with federal criminal law. So why should the special counsel be involved in it?

In any case, Barr did choose to release the report anyway, and Congress now has the ability to decide how it wants to proceed. But the question remains: What should the Justice Department do when it thinks the president may have violated federal criminal law? This whole messy process hasn’t resulted in any clear answer.