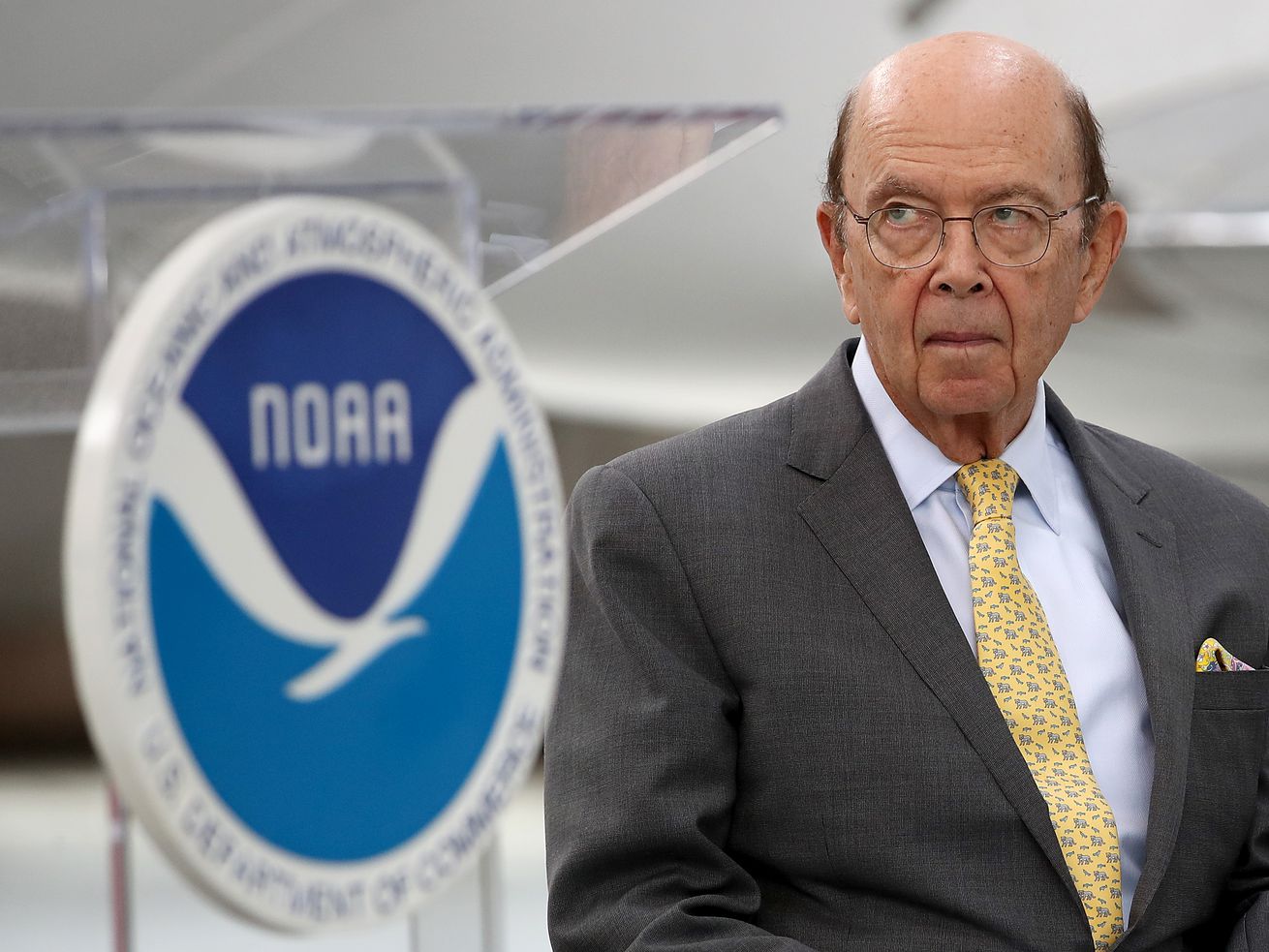 Ross threatened to fire officials if they didn’t back an incorrect tweet sent by President Trump.

Commerce Secretary Wilbur Ross reportedly threatened to fire some of the nation’s weather officials if they refused to lie to the public about the projected path of Hurricane Dorian.

Ross wanted top officials at the National Oceanic and Atmospheric Administration (NOAA), an agency under his purview, to claim scientists at the agency’s Birmingham, Alabama, National Weather Service branch were mistaken when they corrected a tweet President Donald Trump sent ahead of Dorian’s arrival that said the storm would “most likely” affect Alabama.

When Trump sent the tweet, projections had not shown Dorian affecting Alabama for some time, and to ensure Alabamians did not panic, the National Weather Service Birmingham tweeted, “Alabama will NOT see any impacts from Dorian.”

As Dorian devastated the Bahamas and raked North America’s eastern seaboard, the president pushed back against this correction in a series of angry tweets that largely targeted journalists who reported on his error. The situation escalated further when Trump presented a weather map during a hurricane update that had been altered with a marker to show Dorian threatening Alabama.

Although that episode, dubbed Sharpiegate, did include some casual lawbreaking (issuing a false or altered official weather forecast is illegal and can be punished by a fine or three months in prison), it was largely used to drive broadcasts on cable news and as a front for memes, including some shared by the president himself.

Though a somewhat outrageous example of President Trump’s inability to admit fault, in the grand scheme of things, it wasn’t that big of a deal, as Vox’s Emily Stewart explained.

Ross’s threat, however, transforms the affair into something more serious. The commerce secretary denies making those threats. But if he did, as three people told the New York Times, it turns Sharpiegate into a warning that contradicting Trump, even in the interest of safety, can lead to the end of one’s livelihood (if not career), and that the man in charge of the 2020 census is not above ordering the manipulation of facts in order to please the president.

Trump and his defense of his mistaken Hurricane Dorian tweet, briefly explained

As Hurricane Dorian was approaching the Bahamas, its path remained uncertain: Experts believed it would remain off the US’s east coast, but some models showed it making landfall in states like Florida and the Carolinas.

The people of Alabama, however, were spared worry and hurricane preparations, believing themselves to be out of Dorian’s reach. Some early projections showed a small likelihood of the state feeling the effects of the hurricane’s extremities, but these were quickly superseded by forecasts that showed Dorian hewing more closely to the US Atlantic coast.

As the storm wreaked havoc on the Bahamas, Alabamians were disabused of the notion they were now safe when President Trump wrote on Twitter, “In addition to Florida – South Carolina, North Carolina, Georgia, and Alabama, will most likely be hit (much) harder than anticipated.”

In addition to Florida – South Carolina, North Carolina, Georgia, and Alabama, will most likely be hit (much) harder than anticipated. Looking like one of the largest hurricanes ever. Already category 5. BE CAREFUL! GOD BLESS EVERYONE!

That prompted the corrective tweet from the National Weather Service of Birmingham, Alabama, which not only reassured Alabamians that they were safe but also set off a chain of news stories about the back and forth.

For the next week, as the storm left large swaths of the Bahamas destroyed, cut off North Carolinians from the mainland, and destroyed infrastructure along North America’s Atlantic coast, Trump continued to assault “the Fake News Media” which was, in his words, working to “demean” him by covering the discrepancy, and going “crazy hoping against hope that I made a mistake (which I didn’t).” He finally concluded the whole affair was a conspiracy against him by pro-Obama forces and announced, “I was with you all the way Alabama. The Fake News Media was not!”

As this train of tweets went on, a new wrinkle in the saga occurred in the physical world: Sharpiegate.

The president gave a hurricane update from the White House on September 4 as Dorian moved “dangerously close” to Florida and the Carolinas. He used an outdated NOAA map from late August that showed the hurricane’s projected path taking it directly over Florida. And that map contained an addition to the white cone that showed Dorian’s probable path: The cone had been extended using a black marker to cover part of Alabama.

Weather experts questioned why the president was giving a hurricane briefing to the public that included projections that were almost a week out of date, and also wondered why those projections had been tampered with. The fact that latest forecasts showed Dorian strafing the US east coast suggested to many the old data was used in order to better make the case that the president had been correct in issuing his warning to Alabama. But in using the old map, Trump also incorrectly suggested to the people of Florida that they were still in Hurricane Dorian’s path.

News outlets — particularly those on cable television — reported on the strange extension, and Trump (and members of his executive branch) continued to fire back at these reports in tweets. Even as the storm left the US and moved on to threaten Canada, Trump refused to let the matter drop, retweeting videos critical of CNN’s coverage of the gaffe as he worked on finalizing (before canceling) the historic peace deal with the Taliban.

In the midst of the president’s back and forth with the media, NOAA issued its own bizarre statement about NWS Birmingham’s tweet that defended the president and contradicted its scientists that read, “The Birmingham National Weather Service’s Sunday morning tweet spoke in absolute terms that were inconsistent with probabilities from the best forecast products available at the time.”

Weather experts were incredibly disappointed at the move and criticized the decision in the strongest possible terms.

Bill Read, a former director of the National Hurricane Center, wrote on Facebook that the statement was “heartbreaking” and “embarrassing.” David Titley, the former chief operating officer of NOAA, called the issuance of the statement, “Perhaps the darkest day ever for NOAA leadership.”

In the face of this criticism from its former officials and from peers, the agency seemed to reverse course somewhat on Sunday, when Craig N. McLean, NOAA’s acting chief scientist, sent an email to staff that praised NWS Birmingham’s decision to send a corrective tweet and derided his agency’s Friday press release, which he wrote “inappropriately and incorrectly contradicted the NWS forecaster.”

“My understanding is that this intervention to contradict the forecaster was not based on science but on external factors including reputation and appearance, or simply put, political,” McLean wrote, before going on to promise to investigate how and why his agency chose to back up the president’s incorrect information.

On Monday, McLean’s comments were echoed by National Weather Service Director Louis Uccellini at a National Weather Association conference. Uccellini asked the NWS Birmingham to stand during his speech and praised them for acting “with one thing in mind: public safety.” The experts in attendance reportedly gave Uccellini a standing ovation for his remarks.

Given that all of these high-ranking members of NOAA were against issuing a press release in support of Donald Trump, it would seem impossible that the release should exist in the first place.

According to the New York Times, the release’s origins lie at the very top of those scientists’ department, with Secretary of Commerce Wilbur Ross.

The NWS, which issued the tweet that began this drama, is housed in NOAA; NOAA, in turn, is part of the Department of Commerce, which is run by Ross, a staunch ally of President Trump.

Much of NOAA’s work is done by career scientists, but some of it, including some of its executive functions, is performed by political appointees, like Neil Jacobs, McLean’s boss and the acting administrator of NOAA.

Dr. Jacobs objected to the demand and was told that the political staff at NOAA would be fired if the situation was not fixed, according to the three individuals, who requested anonymity because they were not authorized to discuss the episode.

Hours after that call, NOAA released the controversial statement that rebuked the Birmingham office and claimed Trump had been right all along.

It is not clear what role Trump had, if any, in issuing the threat, but it is reminiscent of the behavior of strongmen he is quick to fete. While those leaders — men like North Korean dictator Kim Jong Un and Russian President Vladimir Putin — typically take the harsher tack of (at best) jailing those who disagree with them, threatening to fire people because their agency publicly corrected you in the interest of the people you are sworn to serve is not something generally done in healthy democracies.

Observers and officials at NOAA also worry the move could have a chilling effect that might lead to confusion during a crisis. In this case, anyone in Alabama who saw Trump’s tweet and went to buy hurricane supplies would have simply had more water and dried goods than they needed. However, should the president send the opposite sort of tweet in the shadow of a disaster, telling citizens they were safe when they were not, officials worry experts might hesitate to speak out, thereby putting lives at risk.

As McLean wrote in his message to his staff: “If the public cannot trust our information, or we debase our forecaster’s warnings and products, that specific danger arises.”

As concerning as the reported NOAA threats might be on their own, they’re even more so when you consider the other agencies under Ross’s purview. As commerce secretary, Ross also oversees the Census Bureau; he’s already been in the middle of a scandal over his attempts to place a citizenship question on the decennial count.

The census is important in large part because its count of the US population is used to determine how federal funding is distributed to states and how many seats each state is to have in the House of Representatives.

Ross claimed that a citizenship question needed to be added to the count so that the Trump administration could properly defend the Voting Rights Act, arguing that by better understanding noncitizens and their neighborhoods, the federal government could ensure they weren’t subject to discrimination.

Civil rights activists pointed out the Trump administration had done little to promote ballot access before and argued that its true reason for adding a citizenship question was to depress the response among communities of color, undercounting them and thereby weakening their political influence.

A legal challenge to the attempt made it all the way to the Supreme Court, which ruled that Ross had made up a “contrived” reason to add the question and that it therefore couldn’t be included. Ross worked to come up with a better explanation for why he wanted the question but could not do so in time to accommodate the surveys’ printing, and the Trump administration decided to drop the issue.

Reports that the man in charge of it is willing to threaten those who publicize facts the administration takes issue with have some worried that if the results of the 2020 election seem as if they will not be favorable to the aims of the Trump presidency, Ross could similarly direct census officials to be dishonest about the results.

And that dishonesty would have far-reaching effects that go beyond upset officials, a bruised presidential ego, or unnecessary public confusion to affect the next generations of Congress and how local communities receive funding.