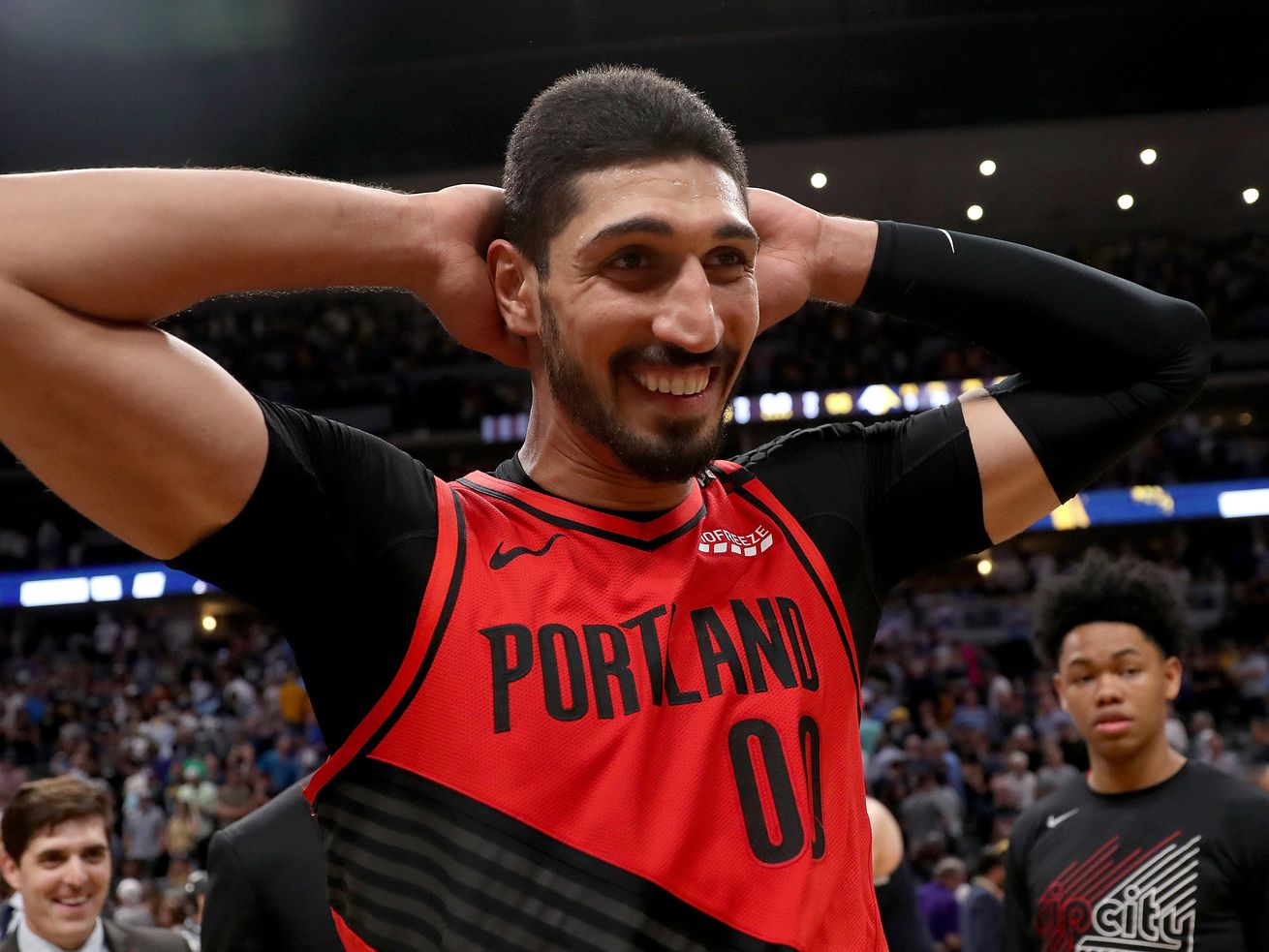 The Portland Trail Blazers center is an outspoken critic of Turkish President Recep Tayyip Erdoğan and Turkey’s descent into authoritarianism.

The Portland Trail Blazers still have to win four games to reach the NBA Finals. So do the Toronto Raptors.

But if that happens — and that’s a big if, as the Trail Blazers are already down a game to the reigning NBA champs the Golden State Warriors — the NBA playoffs could suddenly have some geopolitical implications.

That’s because Enes Kanter, the center for the Portland team, is currently the target of an Interpol “red notice” — basically, an arrest warrant — put out by the Turkish government.

Kanter is an outspoken and longtime critic of Turkish President Recep Tayyip Erdoğan and his increasingly authoritarian policies. Kanter’s Turkish passport was revoked in 2017, and though he’s a reportedly a US green card holder, if he travels to Canada to compete, he could open himself up to arrest.

Again, the Trail Blazers are still a long way from reaching the NBA finals (as are the Raptors). But the potential matchup has already prompted Sen. Ron Wyden (D-OR) to write to Canadian Prime Minister Justin Trudeau to ask him and Canadian officials to “facilitate Mr. Kanter’s safe passage to and from Canada” if Portland and Toronto meet in the finals.

“I also urge your government to state publicly that it will not comply with any Interpol red notice meant to interfere with Kanter’s livelihood and to intimidate him and his family back in Turkey,” Wyden wrote.

A spokesperson for Canada’s minister for immigration told the Associated Press that it couldn’t comment on specific cases because of privacy reasons, but that “we are committed to ensuring that every case is assessed fairly, on its merits and in accordance with Canada’s laws.’’

But Kanter’s saga began long before the prospect of a playoff matchup at the end of the month — and his status as an NBA player has elevated his protest against Erdoğan’s anti-democratic crackdown, even as he finds himself a victim of it.

Who is Enes Kanter, and why is he battling with Turkey?

Enes Kanter, 26, is a Turkish basketball player (though he was born in Switzerland) who’s played professionally in the United States since 2011. He joined the Portland Trail Blazers in February 2019.

Kanter is a Muslim — he’s been very open about fasting during Ramadan during the NBA playoffs — and a devoted supporter of Fethullah Gülen, a Turkish cleric who preaches a moderate form of Sunni Islam. Education is a huge part of Gülen’s movement, and he and his adherents have helped establish schools in Turkey and abroad that preach his teachings.

Gülen has lived in Pennsylvania since 1999. But Erdoğan has accused him of orchestrating the failed July 2016 coup against him and his government. After the coup, Erdoğan demanded that the US extradite Gülen to Turkey to stand trial, despite little evidence that Gülen and his followers instigated the coup attempt.

Even so, Erdoğan purged thousands of suspected followers of Gülen from the armed forces, civil service, and the judiciary in the wake of the coup — and then continued to try to stamp out pretty much any form of dissent within the country.

In the nearly three years since the coup attempt, Erdoğan has awarded himself additional powers, which has effectively turned Turkey into an autocracy. He continues to quash any challenges to his authority; in March, an opposition candidate was elected Istanbul’s mayor, in an embarrassing blow to Erdoğan, whose ally lost the race. But in May, Turkey’s electoral commission voided the election and declared a new contest to be held in June.

Given all this, it’s not that surprising that Kanter’s ties to Gülen, and his criticism of Erdoğan’s power grab in recent years, have turned him into a target for Erdoğan.

Kanter vocally criticized Erdoğan after a terror attack in Ankara in 2016 and has continued to publicly blast the leader for his crackdown, calling him a dictator and the “Hitler of our Century.”

In May 2017, Kanter said he was detained in Romania after authorities told him his passport was invalid. He said that Turkey rescinded his passport because of his “political views.” He was eventually released and was able to get to London and then New York, reportedly with the help of the State Department.

I’m being held at Romanian airport by Police!! pic.twitter.com/uYZMBqKx54

In December 2017, the Turkish state-run news agency said prosecutors sought a four-year sentence for Kanter for insulting Erdoğan over Twitter in 2016. Kanter was also reportedly indicted in 2018 for making “hurtful and humiliating” comments about the head of the Turkish basketball league, who happens to be an ally of Erdoğan’s and has, incidentally, said some hurtful things about Kanter.

Kanter’s family also became a target for the Turkish leader, including his father, mother, and sister, who are still in Turkey. Kanter told the New York Times in January that he stopped communicating with them directly after his family home was raided in 2016.

But in the summer of 2018, the Turkish government indicted Kanter’s father on charges of being a member of a terrorist group. In an op-ed Kanter wrote for Time in September 2018, he said his outspokenness had directly endangered his father and the rest of his family:

If you speak out against Erdogan, it can affect your whole life and everyone around you. It has been too dangerous for me to set foot in Turkey for three years. The last time I visited, the government destroyed my brothers’ school and threw my dentist and his wife in prison. The regime arrested and charged a man for links to Gulen after I took a picture with his child, and went after a comedian after he exchanged a few tweets with me. Last year, Erdogan canceled my passport and put out an international warrant for my arrest. That means I am now stateless and pretty much can’t leave the United States. It’s interfering with my career, too.

Erdoğan’s targeting of Kanter has continued to affect the NBA player’s career. In January 2019, Kanter, then a member of the Knicks, refused to travel to London for a basketball game over fears that Erdoğan’s desire for retribution would endanger his life. (Other reports suggested a visa issue deterred Kanter’s travel, though Kanter denied this.)

This is my travel document:
It’s NOT a visa issue!!!

I CAN go to London.
Either you are delusional, or still Erdogan’s lap dog..
Keep wagging your tail@hidoturkoglu15
@RT_Erdogan #DictatorErdogan pic.twitter.com/UpvEG24ayu

But the same week that Kanter remained in the US as the rest of his team played in England, Turkey put out an extradition order over his so-called terrorism ties. Kanter denied the charges. “The only thing I terrorize is the rim,” he tweeted.

In March, after he’d joined the Trail Blazers, Kanter didn’t travel to Toronto for a regular-season game. Though he’d traveled there to play in the past, he said the combination of passport issues, death threats, and Erdoğan’s arrest warrant prompted him to sit out the game.

In Turkey, Kanter’s activism is effectively nonexistent. Erdoğan tightly controls the media, which repeatedly accuses Kanter of terrorist ties. It also censors his on-court performance. Earlier this month, the NBA cut ties with a Turkish company that ran the league’s Turkish Twitter account after it completely omitted any mention of Kanter’s performance (15 points, nine rebounds) in a playoff game against Denver in a recap tweet.

And Turkey’s S Sport station, which airs NBA games in Turkey, hasn’t broadcast any games since his indictment, according to Reuters. That’s one thing if it’s a Knicks game, but that’s now including Kanter’s Trail Blazers playoffs games against the Warriors. And if the Trail Blazers make it to the NBA finals, Turkish TV just won’t air those games either.

Erdoğan has held power in Turkey for 16 years. He first served as the country’s prime minister and then won the presidency in 2014. He is unlikely to relinquish his influence anytime soon, as he’s crushed dissent in the media, which included jailing hundreds of journalists and shuttering dozens of independent media outlets. He’s purged the civil service, military, and judiciary of his perceived enemies, with arrests totaling in the tens of thousands. He’s also bent the law to his will, altered the constitution to give himself broad authorities, and consolidated power in the executive branch.

Kanter, as a high-profile NBA player, is one of Turkey’s most famous athletes and an obvious target for Erdoğan. But this also means he has a platform to fight back against the president’s attacks.

“This is simple,” he told Religion News in an interview in March. “There are tens of thousands of innocent people in jail, people with limited or no voices, who cannot defend themselves. I am not a journalist or politician, but if I do not stand up for them, then who will?”

Kanter’s cause has found bipartisan support on Capitol Hill too. Wyden, an Oregon native and pretty serious Trail Blazers fan, has defended Kanter, including with his recent outreach to the Canadian officials. The basketball player has met with lawmakers about his situation, including Sen. Marco Rubio (R-FL).

But the demise of democracy under Erdoğan has also complicated the US-Turkey relationship, leaving Washington with less leverage than it might once have had over its ally.

As Vox’s Alex Ward has reported, the strategic partnership between the two NATO allies has deteriorated in recent years — and it’s quite possible it could be beyond repair.

Erdoğan’s drive toward authoritarianism plays a role in this, as the Turkish president has abandoned “secular liberal politics in favor of Islamist political values, harbors anti-Western views, and has widened the US-Turkey gap,” as Ward wrote. And in rejecting the West, Erdoğan has inched closer to US foes such as Russia and China.

Tensions increased between the US and Turkey last year over the jailing of American Pastor Andrew Brunson, whom Turkey also accused of terrorist ties. The Trump administration imposed sanctions and tariffs against Turkey, dealing a substantial blow to its already struggling economy.

Erdoğan clearly hoped to hold out and trade Brunson for Gülen, but Brunson was released in October after the US and Turkey struck a deal, and Gülen remains in the US — so the sticking point between the US and Turkey remains. Erdoğan has also ramped up his anti-US rhetoric recently, which has helped keep tensions high.

Kanter’s continued support of Gülen means he’ll stay in Erdogan’s crosshairs for as long as the Turkish president remains in power — and Erdoğan intends that to be for a long, long time.