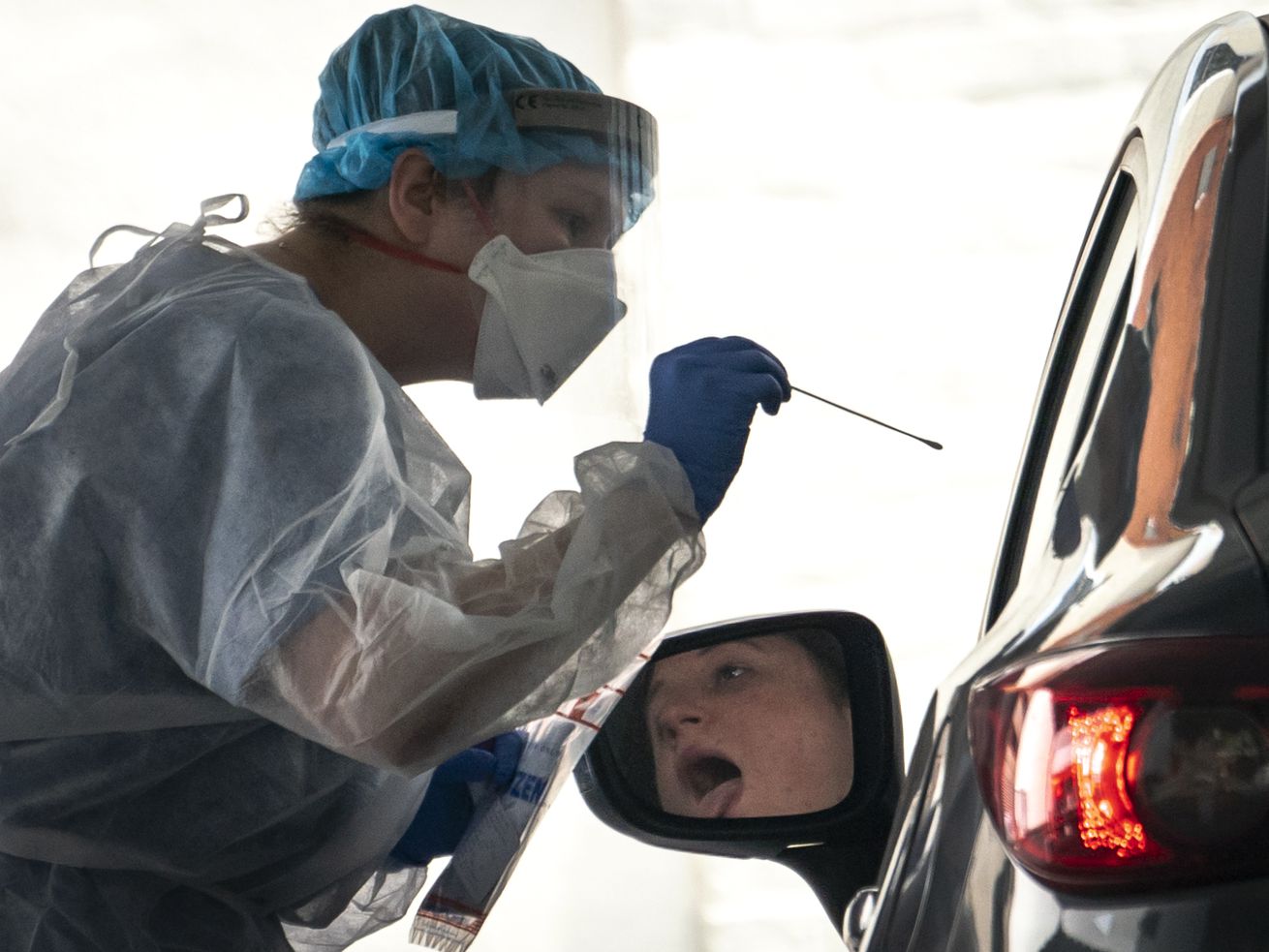 A medical professional administers a coronavirus test at a drive-thru testing site in Washington, DC, on May 26, 2020. | Drew Angerer/Getty Images

Experts say we need more testing. America, for too long, was headed in the opposite direction.

Through the late spring and summer, it looked like America was, slowly but surely, building up its Covid-19 testing capacity. But after July and particularly at the start of September, that progress stalled out.

As of September 17, average daily tests were at about 730,000, down from an average of 780,000 in early September and 830,000 in late July, according to the Covid Tracking Project. Meanwhile, the percentage of tests coming back positive, which is used to gauge testing capacity, has remained around 5 percent — at times above the threshold of 5 percent that experts generally recommend, and exceeding the 3 percent threshold that some have called for.

Only in the past few days have test numbers begun climbing up, reaching a new high of 1,061,411 tests on September 19, possibly due to an increase in states’ reporting of antigen tests.

Experts say the US should instead continue building up its Covid-19 testing capacities to prepare for potential future outbreaks. Testing, paired with contact tracing, remains crucial to controlling the coronavirus, letting officials isolate the sick, track others who may have been infected and get them to quarantine, and deploy broader public health measures as necessary. Aggressive testing and tracing have been highly successful in other countries that got their outbreaks under control, including Germany and South Korea.

So why did testing decline for weeks in the US?

According to experts, there are three major factors: The summer’s worst Covid-19 outbreaks in the US have receded — reducing demand for tests. President Donald Trump’s administration recently recommended less testing, before backtracking on the changes this week. And state governments may not be reporting all the tests within their borders, particularly relatively newer antigen tests that are growing in use.

Combined, all these factors paint a grim picture for the US — one in which the country is still testing too little and flying blind, months into the coronavirus pandemic.

“Every time we make progress in terms of containing the pandemic, we take our foot off the brakes,” Thomas Tsai, a health policy expert at Harvard, told me. “What we really should be doing is to step on the brakes harder, and truly suppress the pandemic. As a country we seem content with half measures, so we end up in this situation where we never really suppress community transmission.”

America has continually struggled with testing. In the spring, it was slow to build up testing capacity due to a mix of federal screw-ups and bureaucratic hurdles, resulting in what’s been called a “lost month” for confronting Covid-19. In the months after, testing did increase. But then when cases started to spike nationwide in the summer, there were more testing shortages, as some labs reported delays for results as long as weeks. The recent fall in testing is yet another potential setback.

It’s these testing problems, along with other mistakes by Trump and many state officials, that have led to America suffering a massive, deadly Covid-19 epidemic. While the US hasn’t seen the most coronavirus deaths of wealthy nations, it’s in the bottom 20 percent for deaths since the pandemic began, and reports seven times the deaths as the median developed country. If the US had the same death rate as, say, Canada, 115,000 more Americans would likely be alive today.

Now experts are worried the fall and winter could pose big threats. Schools are reopening, already leading to outbreaks in universities and K-12 settings. In colder areas, it will become much harder to gather outside, where the virus has a harder time spreading. Families are bound to gather for the holidays, from Thanksgiving to New Year’s Day. Another flu season is coming, which could strain health care systems when they might be dealing with a surge in Covid-19 cases.

All of this will require more testing. America, for too long, was headed in the opposite direction.

One possible reason that testing declined is rooted in good news: Since July and August, coronavirus cases have dropped in the US following the nationwide “second wave” over the summer.

That’s likely led to less demand for tests. To some extent, that makes sense: If fewer people are getting sick, or less likely to see others around them get sick, they’re not going to want tests as much.

But experts worry this is short-sighted. If the US wants to get control of the pandemic, it should be testing people aggressively, leveraging broad surveillance to detect new cases quickly and prevent them from turning into even more cases. That would involve a lot of testing even in communities that don’t appear to have many cases right now — to ensure that there aren’t any otherwise undetected outbreaks beginning to take form before it’s too late.

“What we need now is a paradigm shift from a diagnostic view of testing towards a screening role of testing,” Tsai said. “We need to be able to test asymptomatic individuals — nursing homes, teachers, students, first responders — to be able to expand testing in the communities to not just mitigate, but to suppress the pandemic.”

Under this framework, the US can’t ease up just because cases have declined. Instead, the country should be preparing for — and preventing — future waves by building up its testing capabilities right now. It’s an acknowledgment of the reality that the coronavirus will be with us until a vaccine or similar treatment is widely available, and we need to be prepared for it.

There are warning signs right now of what happens if we ease up: While cases are dropping nationwide, there have been recent sizable outbreaks in the Midwest and South, with cases spiking in some states, particularly the Dakotas, to levels seen in others earlier this summer. It’s these kinds of outbreaks that more testing would prepare the US for and potentially help nip in the bud.

Trump and his administration, however, have moved in the opposite direction. Arguing that more tests make the US look bad by revealing more cases, Trump said he told his people to “slow the testing down, please.”

It’s a ridiculous idea, given that testing only shows us cases that are already there. But the Trump administration has seemingly embraced the concept: In August, the White House’s coronavirus task force pushed the Centers for Disease Control and Prevention to change its testing guidelines to no longer recommend that people without symptoms get tested even if they come into close contact with someone known to have Covid-19. (After reports of White House pressure on the CDC leaked, the CDC reversed the changes.)

The guidance change could have been one of several factors leading to a decline in tests.

“It could be due to reduced demand for testing, perhaps due to drops in cases [and] deaths, the de-emphasis on testing by the president, and/or confusion caused by the CDC guidance on asymptomatic testing — all of these could contribute to reduced demand,” Jen Kates, director of global health and HIV policy at the Kaiser Family Foundation, told me.

The problem, experts said, is the CDC’s guideline changes were at best misguided and at worst dangerous. We know that people who don’t display symptoms can still transmit the virus — and the virus might spread more in the days before someone develops symptoms. That’s why it’s still important to test people who aren’t displaying symptoms: There’s really no other way to know they’re infected and, given that confirmation, act to stop them from spreading the virus further.

Trump, however, has done everything he can to downplay Covid-19. As he told journalist Bob Woodward on March 19, “I wanted to always play it down.” Trump has said his goal is to prevent a panic, but there’s also a clear political motivation: The more he can make it seem like the country is back to normal before November, the more likely he is to get reelected.

To that end, Trump has resisted anything exposing his failures on the coronavirus. On top of the testing guideline changes, his staff has pushed the CDC to change scientific reports and studies that might make Trump look bad by contradicting his evidence-less claims about Covid-19. He also pushed the CDC out of a public leadership role after an official there made grim, but correct, comments about what to expect under the coronavirus.

Of course, the reality can’t be hidden when it shows up in America’s hospitals and morgues every day.

Antigen tests are taking up more of the share of testing

Specifically, the Atlantic and Kaiser Health News found that states aren’t reporting antigen tests. These tests can provide results more quickly than the more widespread PCR tests, partly because, unlike PCR tests, antigen tests don’t need to go through a lab or hospital.

But this same advantage makes it less likely that the tests will get reported to officials who catalog tests at the local, state, or federal level. Hospitals and labs are used to tabulating and reporting all of the tests they’ve done, then sending off the reports to a local, state, or federal agency. A nursing home, school, or private doctor’s office more likely isn’t.

As of last week, only about 215,000 antigen tests were reported in the US. But as the Atlantic reported, that’s almost certainly wrong:

Millions of antigen tests are now being manufactured every month. Quidel, a $6 billion company that makes one of the most widely used antigen tests, says that it began producing at least 1 million tests a week earlier in the summer. In recent days it has upped that rate to nearly 2 million. “We don’t have any inventory,” Doug Bryant, its chief executive, told us. “We ship every day with what we have.” Becton Dickinson, which makes a competing antigen test, has predicted that it would be manufacturing 2 million tests a week by the end of September.

Testing may be higher than the official data suggests, but the downside is this leaves the country blind. It’s going to be much harder to detect outbreaks in specific cities, counties, or states if tests and their results aren’t reported to officials. This problem will likely get worse as antigen testing expands, especially if a much-coveted at-home test is finally mass-produced and widely used. As Jeffrey Morris, a biostatistics professor at the University of Pennsylvania, told Kaiser Health News, “It’s going to look like your cases are coming down when they’re not.”

It comes back to the same point: Testing is necessary to detect, track, and stop outbreaks before they get worse. If those tests aren’t done, or they aren’t reported, that job is going to get harder. And the US will likely suffer more from Covid-19 — more illnesses, more deaths — as a result.