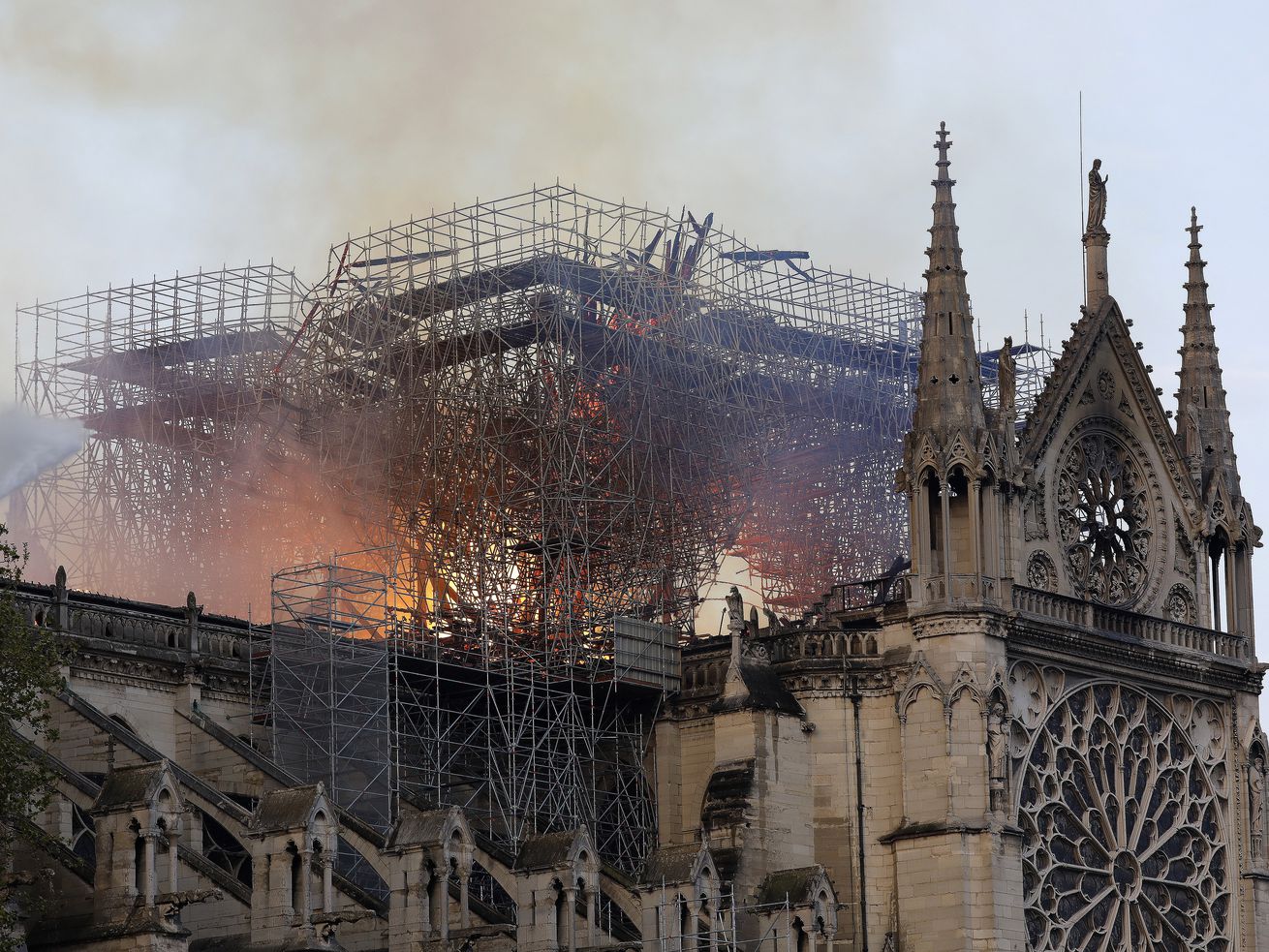 Old wood and ongoing renovations converged to bring about the damage.

The fire that engulfed the Notre Dame Cathedral Monday, causing its roof and its 300-foot oak spire to collapse, was extinguished Tuesday morning. But the damage is severe: The fire destroyed almost all of one of the oldest surviving timber frames in Paris.

Officials are still uncertain about the cause of the inferno. But the cathedral, an 850-year-old exemplar of French Gothic architecture, was undergoing renovations, and officials say something may have accidentally ignited amid the construction.

Even though there’s a lot for fire investigators still to unpack, fire experts say there are a number of explanations for why the cathedral was at risk and why, once the fire got going, it was so difficult to fight.

To find out more, I called Thomas Gernay, an assistant professor of civil engineering at Johns Hopkins University who studies how fires affect structures. He described four big hazards that combined to fuel the destruction.

Notre Dame hasn’t been in great shape for a while

Built in the late 12th century, the cathedral was beginning to show its age. Pollution, weathering, and acid rain stained and pitted its walls and gargoyles. And there were conflicts over who should pay for its upkeep, delaying much-needed maintenance, like removing flammable dust or waxing the wooden roof structure to prevent it from drying out.

That’s a big reason extensive renovations were underway when the fire broke out.

Bringing power tools, electric lamps, and welding equipment in close proximity to a centuries-old building increases the risk of ignition. This is a hazard that comes with any kind of renovation at this scale, but it’s especially risky with a structure that wasn’t designed with fire prevention in mind. The scaffolding structure also provided fuel for the fire.

“There are lots of construction fires. It’s quite a common situation,” Gernay said. “If you combine that with a building that was built at the time where there were no fire protection codes, that’s the situation we are observing.”

There was a lot of available fuel to burn

Though most of what we see from outside Notre Dame is stone and glass, much of the inside is buttressed by timber. Builders harvested more than 5,000 oak trees across 52 acres to build the beams, trusses, and reinforcements for the stone structure and to hold up the roof’s 200-metric-ton lead cladding. The trees themselves were three to four centuries old when they were harvested.

The roof’s latticework used so much wood, it’s been nicknamed “la forêt,” or the forest.

“The roof structure, for instance, is made of thick timber beams, which obviously can provide some of the combustible material and participate in the overall stability of the structure,” Gernay said.

By Tuesday morning, it was clear that almost all of the interior wooden structure had been lost, but most of the stonework survived.

Much of the combustible material in Notre Dame was in its roof structure more than 100 feet off the ground. The cathedral’s spire reached up more than 300 feet. That means the fire was far from the firefighters when it ignited.

“The hose streams could not reach the top,” Gernay said. “At the same time, it’s very difficult to access if [firefighters] wanted to climb up on foot because of the very narrow and winding steps. … They could not really act efficiently to fight the fire at that stage.” And air-dropping thousands of pounds of water all at once on a burning, fragile building in the middle of a dense city would have been counterproductive. “It would be dangerous for structural stability,” Gernay said. “Any sudden loading like this could be the triggering point that triggers the whole [structural] collapse, and of course we want to avoid that.”

Inside is a whole other problem. The primary option is large 2.5″ fire hoses.

These are heavy, difficult to maneuver and against a fire like this, largely ineffective. pic.twitter.com/5tt3yDUpSo

As far as we know, most relics and much of the art was rescued. However, The Guardian reported that some artifacts did sustain damage and others were lost. No fatalities were reported from the fire, but two police officers and one firefighter were injured.

French President Emmanuel Macron vowed to restore the cathedral. “We will rebuild Notre-Dame,” he said. “Because that is what the French expect.” French billionaire François-Henri Pinault has already pledged €100 million to pay for its reconstruction.

But builders will have to mind the delicate balance between preserving history and preventing future disasters. “Hearing that reconstruction is being proposed, that should give an opportunity to consider fire protection options for the structure so as to avoid another catastrophe of this magnitude,” said James Milke, chair of the department of fire protection engineering at the University of Maryland, in an email.

There may not have been sprinkler systems and fire-resistant cladding in the 13th century, but they may be necessary to ensure Notre Dame survives. Yet even the best fire prevention techniques can only do so much for church prized for its antiquity. The same vaulted ceilings, wood framing, and classical building techniques that make Notre Dame so valuable also make it harder to prevent and fight fires.

“A structure as large and old as this is difficult to protect from fire. The rooms are large and high with tons of exposed wood and flammable roofs,” said Peter Sunderland, a professor of fire protection engineering at the University of Maryland, in an email. “Consequently, there are many exceptions in fire codes for places of worship.”

Notre Dame is a survivor

Like the ship of Theseus, Notre Dame has suffered damage, repair, and reconstruction over the centuries.

It was damaged by rioting Huguenots in the 16th century. It was nearly destroyed during the French Revolution as angry crowds sacked the building and decapitated statues. The cathedral has since withstood two world wars, including bullet damage during the Nazi occupation of Paris. The cathedral has also undergone numerous renovations in its history. Its bells were recast and restored in 2013.

The recent fire, however, is a reminder that for this — and for every ancient monument — we still have to prepare for once-in-a-century events.