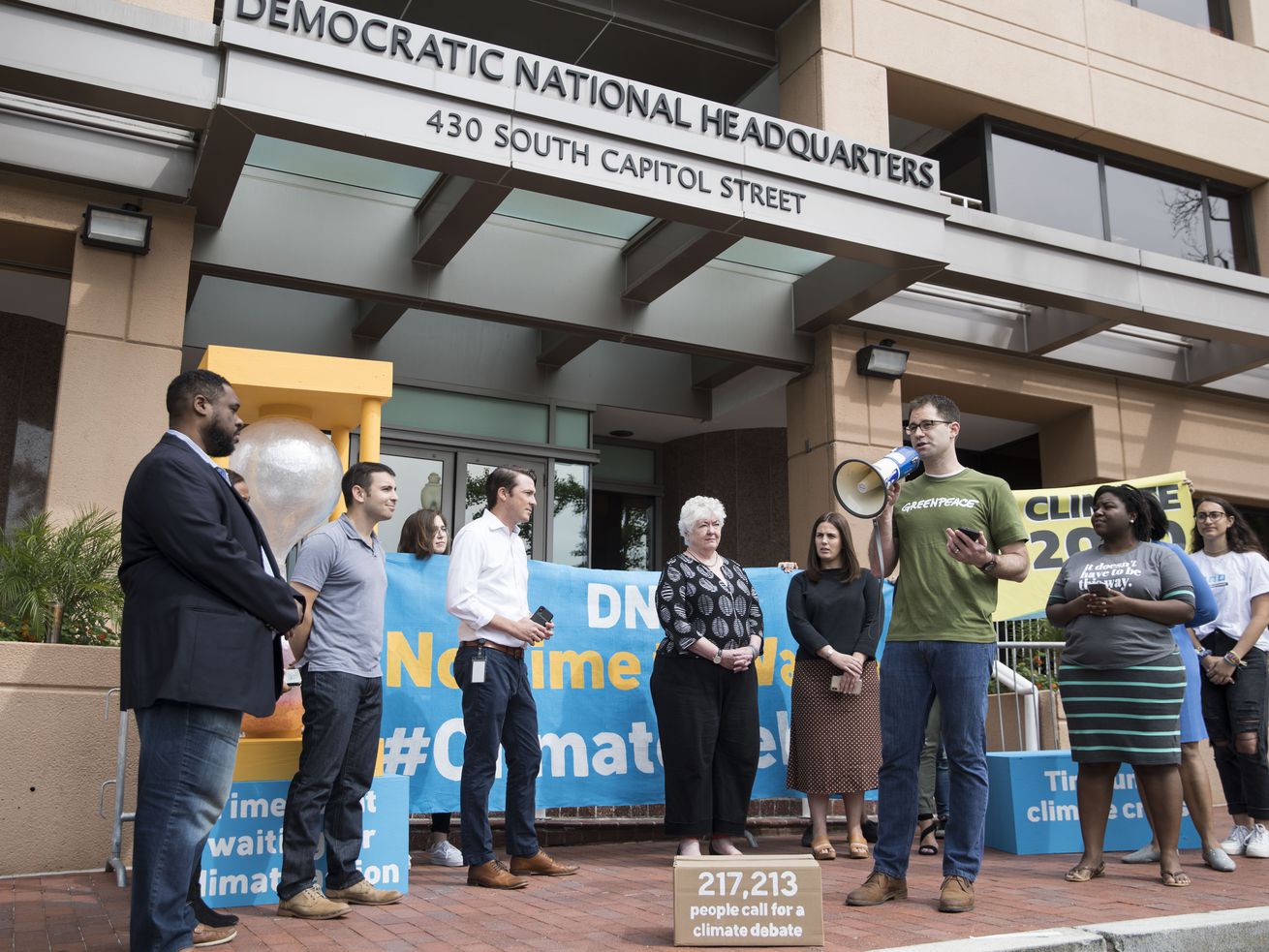 The DNC chair opposes holding a climate change debate, but activists and 15 presidential contenders want one.

The first Democratic presidential debates are this week, with 20 contenders for the White House lined up across two nights.

Climate change is likely to come up, given the venue, Miami, a city where climate change is already threatening coastal properties and where even Republicans want to tax carbon dioxide emissions.

And across the country as a whole, the climate crisis has rocketed up the polls and is now a top-tier issue for Democratic primary voters. A CNN survey this month found that three-quarters of Iowa Democratic caucus participants said that their candidate must treat climate change as the greatest threat to humanity.

But environmental campaigners like Greenpeace and the Sunrise Movement don’t just want a question about climate change during the debates; they want a whole debate event centered on the issue. Several Democratic presidential candidates agree. A group called 314 Action has even pledged $100,000 to host the debate.

The Democratic National Committee, however, isn’t swayed. Earlier this month, Tom Perez, head of the DNC, ruled out an official presidential primary debate centered on climate change in a post on Medium. Perez said that climate change is just one of several high-priority topics, and that it would be unfair to host a debate revolving around it, particularly when one candidate, Washington Gov. Jay Inslee, has centered his entire campaign on the issue.

If we change our guidelines at the request of one candidate who has made climate change their campaign’s signature issue, how do we say no to the numerous other requests we’ve had? How do we say no to other candidates in the race who may request debates focused on an issue they’ve made central to their own campaigns?

But the fact that a senior party official had to shoot down a climate debate shows just how much more active voters are around climate change in this election, especially compared to previous cycles.

Environmental activists were displeased with Perez’s pronouncement. On Tuesday, protesters again gathered at the DNC headquarters in Washington to continue to pressure the committee to hold a climate change debate.

Dozens of young climate crisis activists @sunrisemvmt are protesting at the Democratic National Committee headquarters in Washington, ahead of presidential debates in Miami this week. They want a climate-focused debate, which the DNC won’t hold. pic.twitter.com/BtyscmTWQ9

And it’s not just one Democratic presidential contender that wants a climate change debate; it’s 15, including the frontrunner, former Vice President Joe Biden.

BREAKING: You HAVE to watch this. Joe Biden just agreed to a climate debate on camera. @TomPerez and the @DNC, are you listening yet? RT if you want a climate debate! #climate2020 pic.twitter.com/2mckXAucBD

The debate over the debate is ultimately a microcosm of the different approaches Democrats are weighing to tackle climate change: as the tentpole of their agenda or as an element of every policy.

Climate change is long overdue for a prime-time discussion

Now climate change is a high priority for Democratic voters and elected officials. Some of the strongest activist energy in this election cycle is targeted at limiting greenhouse gases through proposals like the Green New Deal.

“A lot has changed over the past few years as climate change has increasingly become a voting issue,” Sen. Sheldon Whitehouse (D-RI) told Vox in an email. “The DNC is deservedly feeling pressure to do a far better job on climate than in the last primary debates.”

So a presidential climate change debate would be a strong step toward correcting this imbalance in attention. Former New York Times environmental reporter Justin Gillis argued that such an event would not just be a messaging exercise but a useful way to test a candidate’s mettle for the job with a real-world crisis:

All the candidates want to curb fossil fuel emissions, but there is far from a consensus on how to do it. Should nuclear power be part of the solution? A tax on carbon emissions? Tougher regulations? The candidates disagree. Let’s hear what they have to say. If we do, we’ll also see which candidate, under competitive pressure, displays the rhetorical skills the party needs to make this a winning issue in a national election. If the DNC continues with this ludicrous position of stamping out climate discussion in the primaries, we’ll never find out.

One of the first and biggest proponents of a climate change debate is Inslee. He’s made climate change the overarching theme of his campaign. A climate debate would likely put the lesser-known candidate at center stage, and he’s not too pleased with the DNC’s resistance to such an event.

The @DNC won’t agree to a #ClimateDebate. That’s why they need to hear from you — record a video telling the DNC why you want to see a climate debate. #MyClimateDebateStory pic.twitter.com/f3FpWnmPEj

But other Democratic candidates for president have called for such a debate as well, including Bernie Sanders, Beto O’Rourke, and Elizabeth Warren.

The argument over whether or not to hold a climate change debate is a central question in a larger discussion among Democrats over how to combat climate change. Should it be the centerpiece of policy-making, or should climate considerations be an element of other issues of concern?

We’re seeing this play out in how Inslee’s climate strategy compares to that of Warren. In the proposals she’s released so far, Warren has addressed climate change through her plans for public lands, domestic manufacturing, and the military.

So do Democrats really need a climate debate, or can climate change be adequately addressed in other policy discussions? Perez said that even without a climate change-specific debate, it will be an issue that’s impossible to ignore. “I have the utmost confidence that, based on our conversations with networks, climate change will be discussed early and often during our party’s primary debates,” he wrote.

And while there are a lot of things to discuss about how to fight climate change, almost all Democrats agree on the fundamentals, namely that the United States will have to zero-out its greenhouse gas emissions by at least the middle of the century, if not sooner. Many contenders have also pledged to refuse money from fossil fuel interests.

Meanwhile, Democratic presidential candidates, including Inslee, Biden, Warren, Beto O’Rourke, and Michael Bennet have all taken the initiative to offer their own climate policies. It’s likely more candidates will put out their own proposals or sign on to one of the existing plans. And as Robinson Meyer pointed out at the Atlantic, it’s clear that the Green New Deal has lifted the floor for what passes as an acceptable climate policy for Democrats. So any debate among Democrats on climate policy would scarcely illuminate the small and shrinking divides among the two dozen presidential hopefuls.

“Whoever becomes the Democratic nominee will have the most serious climate change proposal and policy plans ever in American history,” said Paul Bledsoe, a former climate adviser to President Bill Clinton and a strategic adviser at the Progressive Policy Institute.

He added that centering a debate entirely on climate change could carry a political cost. “To somehow make a fetish of climate change as the sine qua non of the 2020 election would in fact fall into a trap which the Republicans are trying to create, which is a view of Democrats as concerned only about non-pocketbook issues,” Bledsoe said. “I applaud the DNC for having the political common sense not to have a debate devoted to a single topic, whatever the topic.”

The DNC has created a long list of rules to govern who qualifies for the debate stage, setting thresholds for polling and fundraising. (Vox’s Andrew Prokop put together an excellent explainer about Democratic debate rules.) Among the rules is that a candidate who appears at an unofficial debate will be barred from the official debates. So even if a candidate decides to create their own debate event, be it about the climate crisis or otherwise, they stand to be excluded from the main stage (climate change “forums” and “town halls” are still permitted).

Ultimately, debates are theater. They may only move poll numbers by small amounts, and their perception is shaped often as much by media coverage as the contents of the debates themselves. A meaningful climate policy debate could still be had without a two-hour block of exclusive airtime.