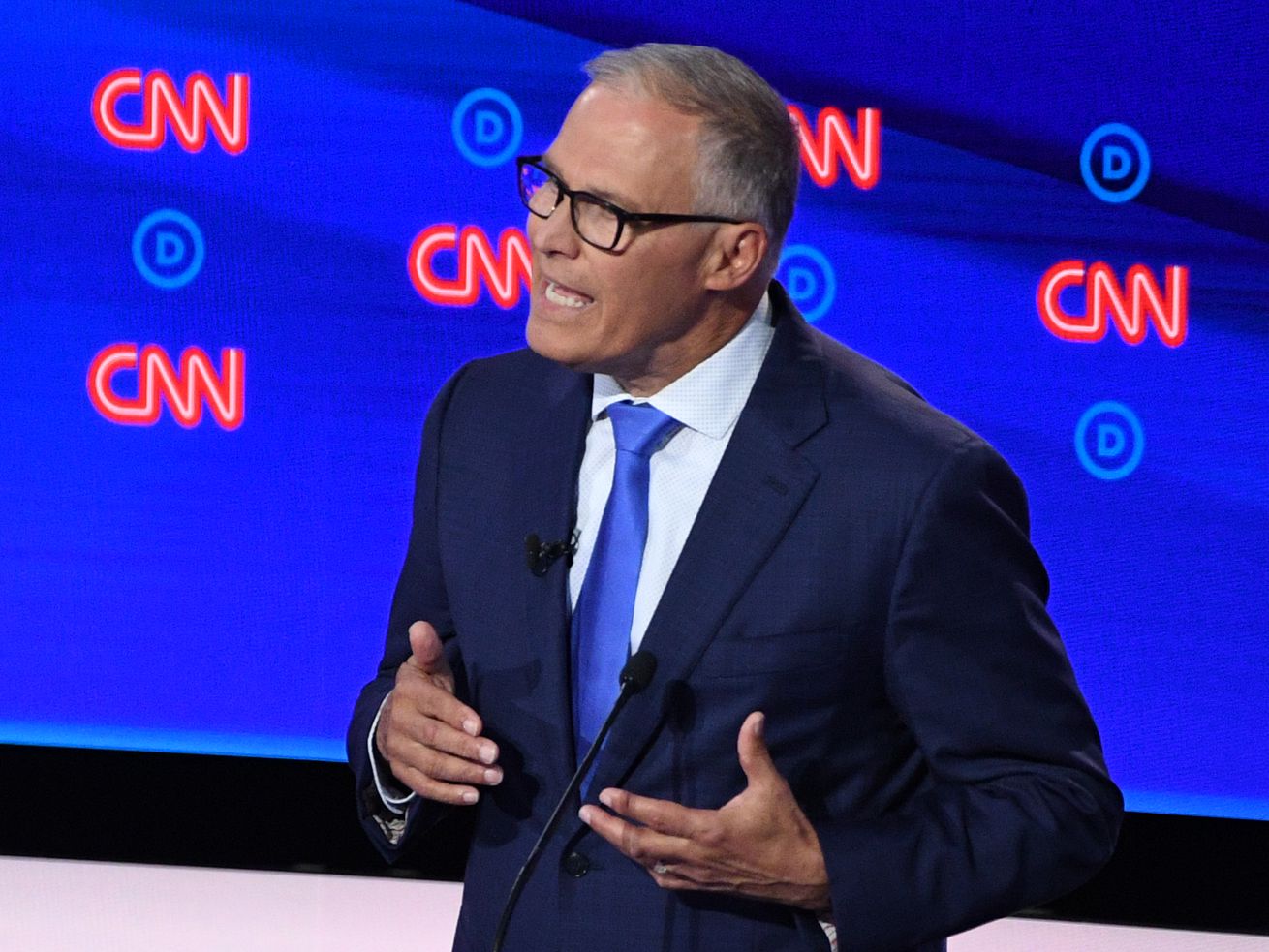 It’s not about long-term targets; it’s about short-term commitment.

During Wednesday night’s Democratic primary debate, there was an extended and relatively substantive exchange on the subject of climate change, at least by the standards of the televised-debate genre.

But it was also, in the end, quite strange, because it pivoted around a dispute between Jay Inslee and Joe Biden that never quite came into focus. It had the effect and theatrics of an argument, but it was never quite clear what the real difference was supposed to be.

In fact, with the exception of Andrew Yang’s bizarro climate adaptation plan, almost everything every candidate said was perfectly consistent with what the other candidates were saying. There was a lot of vigorous agreeing: Climate change is an existential problem; it requires urgent action and innovation; solving it will create jobs. Different candidates emphasized different themes and solutions, but despite the moderators’ best efforts, there were few clear contrasts drawn on the larger question.

But there actually is a contrast worth drawing out, and Inslee vs. Biden is a helpful lens through which to view it. It represents a larger divide in the Democratic Party today, between climate hawks and “moderates.”

The difference lies not in the ultimate level of ambition, not in the headline targets, but in the willingness to see that ambition through to the radical action it requires in the near term.

The climate debate that wasn’t

Here’s how the Inslee-Biden encounter went down. Moderator Dana Bash first lobbed the climate question to Inslee: “You … are calling it the No. 1 priority in your campaign. What do you know that the others don’t?” Inslee got to make a nice, clean mission statement. Then Bash said to Biden, “Vice President Biden, Governor Inslee said your plan is a ‘middle ground.’”

(For the record, Inslee was quoting Reuters. Biden campaign sources allegedly said they hoped the plan “will appeal to both environmentalists and the blue-collar voters who elected Donald Trump.”)

Instead, he rambled for a moment about how he would re-join and strengthen the Paris climate agreement, and then Yang cut in.

But after Yang’s answer, Inslee said, “the vice president challenged me,” even though Biden never said his name. And when the moderators gave him more time, he said to Biden:

Biden could have responded, “My plan adopts the targets the IPCC recommends, and I’m committed to doing whatever it takes to hit those targets.” Instead, he started talking about electric vehicle charging stations.

Then came the strangest exchange of all. Bash pressed Biden, “Just to clarify, would there be any place for fossil fuels, including coal and fracking, in a Biden administration?”

And Biden gave an uncharacteristically straight answer: “No. We would work it out. We would make sure it’s eliminated and no more subsidies for either one of those. Any fossil fuel.”

That seems clear enough! “Make sure it’s eliminated … any fossil fuel.” So clear, in fact, that the campaign later, ahem, clarified to Guardian reporter Emily Holden.

An answer on Biden’s confusing statement on fossil fuels last night. No, he wouldn’t phase out coal and gas under his administration. #climate pic.twitter.com/1SRe5gVsVO

Nonetheless, Inslee responded with umbrage: “We cannot work this out. The time is up! Our house is on fire. We have to stop using coal in 10 years, and we need a president to do it or it won’t get done.”

But … didn’t Biden just say he’d get the US off coal? It’s as though Inslee showed up for an argument, Biden wouldn’t have it, so Inslee just had his half of it anyway.

Booker also took a swipe at Biden, saying that “nobody should get applause for rejoining the Paris climate accord. That is kindergarten.”

But … Biden has issued a climate plan. Booker hasn’t.

What exactly is at issue here? I suspect many viewers were left confused. So let’s try to make some sense of it.

Biden’s climate plan targets a net-zero-emissions US economy by 2050. There are four important things to note about this target:

It’s this last bit, No. 4, where we find the locus of conflict.

The conventional Democratic approach to climate is crumbling

For decades now, Democrats have professed to agree with ambitious long-term carbon-reduction targets. The Waxman-Markey climate bill of 2008 targeted 80 percent reduction by 2050. But that bill did not itself contain sufficiently stringent short-term policies to guarantee that the long-term target would be hit.

And that’s generally been the play, to profess fealty to long-term targets while shying away from the short-term action those targets imply — to say the right things on climate change but never quite put it at the front of the line, never quite spend the political capital on it. (The one great exception, Nancy Pelosi pushing Waxman-Markey through the House, is now viewed by Democrats as a cautionary tale.)

Democrats have never really grappled with the details of aggressive short-term climate policy. And because the unbroken wall of Republican opposition makes substantial federal climate policy impossible anyway and perpetually holds the debate to the remedial “is it real” level, Democrats never really get called on it.

Climate activists are trying to call them on it. That’s why, more than any long-term target, the Green New Deal is focused on an immediate 10-year mobilization of resources. That’s what will be required for any hope of hitting the long-term target — the only question is whether you admit that or not.

Jay Inslee is also trying to call his fellow Democrats on their hedging. He doesn’t want them to wave at the long-term target, list a few nice-sounding policies (like EV charging stations), and skate by. He needs to focus the climate discussion on more proximate questions, like:

Do you also accept the IPCC’s target of 50 percent carbon reductions by 2030? Inslee does. (This puts things in perspective. 2030 is only 10 years away. It would demand nothing less than an immediate crash program.)

Do you support phasing out coal combustion and reaching 100 percent carbon-free electricity by 2030? Inslee does.

Do you support banning the sale of internal combustion engine vehicles in the US from 2030 forward? Inslee does.

Do you support a national ban on fracking? An end to federal leasing of land for fossil fuel production? Rejection of all future permit applications for fossil fuel infrastructure? Inslee does.

Perhaps most important of all: Will you prioritize climate change in your administration, across all agencies and areas of policy? Inslee will.

These are the kinds of near-term policies and commitments that will be required for the US (and the world) to hit its long-term 2050 target. You cannot accept that target without at least implicitly supporting radical short-term action.

Do the other candidates — Biden, or any of them — understand that? Are they committed to pushing the political envelope, expending political capital in pursuit of the most stringent possible climate policies? (And will they scrap the filibuster to do it?)

If there’s going to be a Democratic climate debate, it ought to be about that: not grand long-term ambitions but what the next president can get going in the next 10 years. If Inslee’s candidacy, the only one truly taking climate change seriously, is to survive, those questions need to move front and center.

And that, to make a short story long, is why he went after Joe Biden.