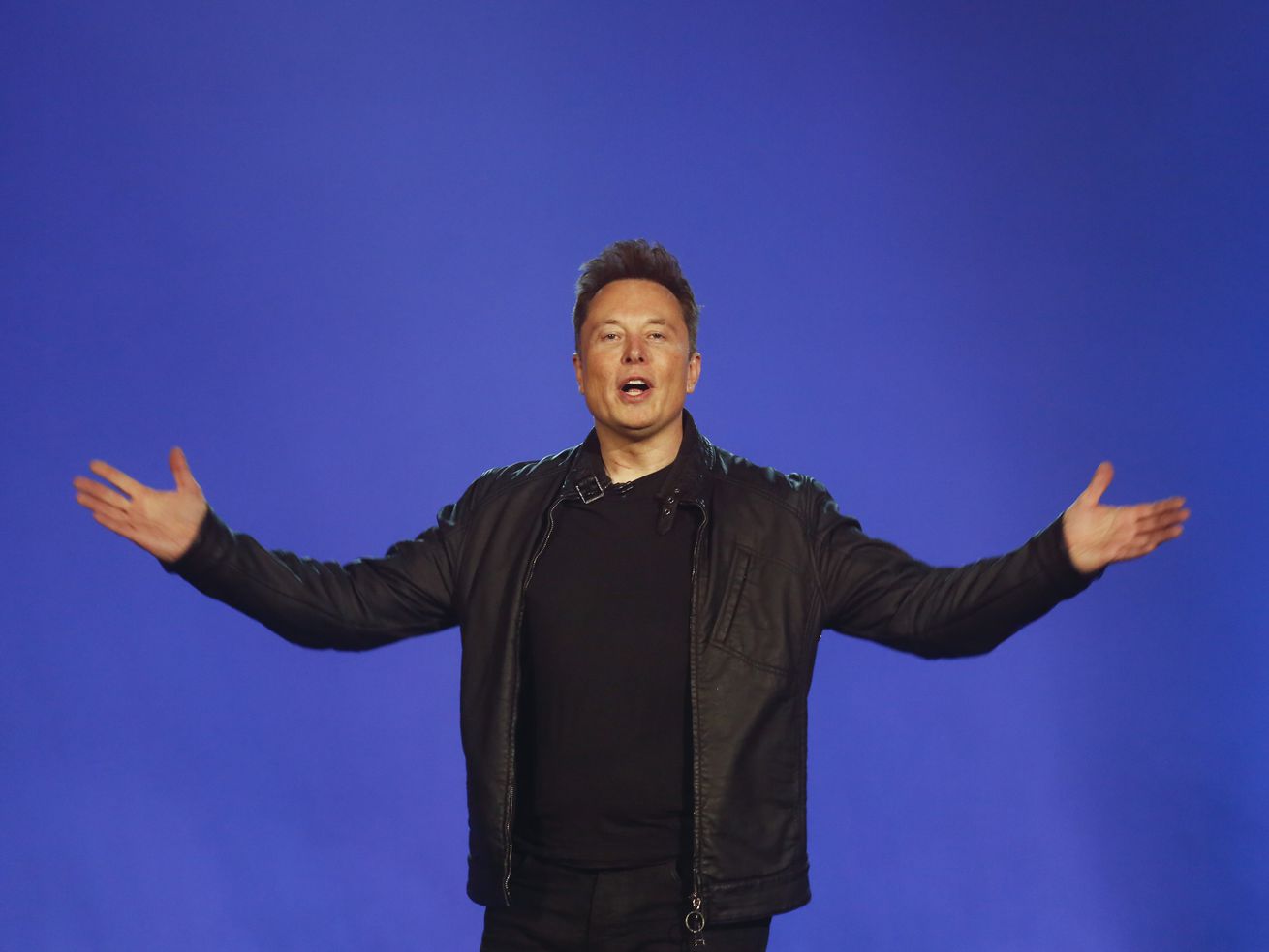 Elon Musk has long been critical of the government’s reaction to the coronavirus pandemic. | Ringo H.W. Chiu / AP Photo

Elon Musk has reopened Tesla’s factory in Fremont, California, pushing back against local public health officials who declined to give the company authorization to resume production. After previously doubting the severity of the Covid-19 pandemic, threatening to move Tesla’s headquarters out of California, and even filing a federal lawsuit, Musk has now volunteered to be the first one arrested for defying the county’s order, though that’s yet to happen.

“I will be on the line with everyone else,” the Tesla CEO tweeted on Monday afternoon. “If anyone is arrested, I ask that it only be me.”

On Monday, a local Alameda official wrote to Tesla ordering the company to cease production beyond minimum basic operations, according to the San Francisco Chronicle. But that doesn’t appear to have stopped the company’s work. Local news footage showed activity at the Tesla plant in Fremont not long after Musk’s tweets. In fact, one worker told the Chronicle that work had resumed even earlier. And in an email obtained by the Guardian, Tesla workers were told that if they choose not to return to work, they risk losing their unemployment benefits.

Tesla did not reply to Recode’s request for comment in time for publication.

This situation doesn’t bode well for several parties involved. How local officials, who maintain they’re still negotiating with Tesla on how to reopen safely, ultimately respond will reveal how much power they really have in enforcing social distancing and stay-at-home measures. After all, Tesla coming away unscathed could set a concerning precedent for local officials that will need to push back against influential companies eager to resume production and manufacturing.

Plenty of people have been caught violating rules instituted by the pandemic, and some — disproportionately black and brown people — have been arrested.

But Musk is quite literally one of the richest men alive and, thanks in part to his fervent fan base, seems to believe that Tesla will not be penalized, despite the order. In fact, he’s already warned that the manufacturing currently done in Fremont could potentially be moved elsewhere. After Musk encouraged his supporters to campaign on Tesla’s behalf, leaders in other states, including the governor of Texas, started encouraging Musk to move operations.

Given that Tesla employs some 10,000 people at the Fremont plant, California would undoubtedly prefer to keep those jobs in the state. And Musk has already picked up some other notable support. On Tuesday morning, President Donald Trump declared in a tweet that the state should allow Tesla to open the factory immediately, and adding “It can be done Fast & Safely!”

Meanwhile, Treasury Secretary Steve Mnuchin told CNBC on Monday, “He’s one of the biggest employers and manufacturers in California, and California should prioritize doing whatever they need to do to solve those health issues so that he can open quickly and safely.”

Tesla is not the only company eager to push back against local officials and return to work, though it’s the most high-profile company to do so. At least two meatpacking facilities have been pushed to reopen, despite the concerns and warnings of local officials. But that should be very, very concerning when we’re relying on our local government officials to set the benchmarks — and enforce public health rules — for returning to work safely.

The Fremont factory in Alameda County is the mainstay of Tesla’s US operations, but the factory has been shut down since March 23. The factory’s initial closing, much like its reopening, was mired in controversy. It all started 10 days after this March 6 tweet:

The coronavirus panic is dumb

On March 16, Alameda County issued its shelter-in-place order. That evening, Musk told staff in an internal email, “if you feel the slightest bit ill or even uncomfortable, please don’t feel obligated to come to work.” He added, “I will personally be at work, but that is just me. Totally OK if you want to stay home for any reason.”

The next day, the Alameda County Sheriff’s Department said in a tweet that Tesla was not considered an “essential business” but could “maintain basic minimum operations.” According to the county’s order, this included “minimum necessary activities to maintain the value of the business’s inventory, ensure security, process payroll and employee benefits.” Tesla responded to that by saying it would reduce its workforce to 2,500 people, and then, on March 18, General Motors, Ford, and Chrysler announced the shutdown of their factories. Tesla followed suit a day later on March 19, which was incidentally the same day Musk started tweeting about making ventilators.

Nearly two months later, California Gov. Gavin Newsom issued new guidance for the return of manufacturing in the state. It seems Tesla interpreted this as permission to return to work. In a blog posted over the weekend, the company said it planned to restart operations with several notable adjustments, and had also said that people would work in shifts so that only 30 percent of the workforce would be present at a time. But California has also maintained that local governments can maintain stricter measures than those proposed by the state as a whole. Alameda County decided to do just that and has so far declined to give Tesla permission to resume operations at its Fremont factory.

In response, Tesla sued Alameda County on May 9, arguing that it had a right to open and that the county’s rules contradicted statewide policies. Musk announced the lawsuit on Twitter, where he also threatened to move the Tesla factory out of California:

Frankly, this is the final straw. Tesla will now move its HQ and future programs to Texas/Nevada immediately. If we even retain Fremont manufacturing activity at all, it will be dependen on how Tesla is treated in the future. Tesla is the last carmaker left in CA.

This brings us to May 11, when Tesla reopened the Fremont factory. The Alameda County sheriff maintains that Tesla has not been given the county’s blessing to resume production, and despite negotiation, the department said there’s yet to be an “approved plan” for resuming production, according to a statement issued after the factory reopened anyway.

Meanwhile, despite Musk’s offer to be the first one, it doesn’t look like there have been any reports of employees being arrested.

But let’s not forget how much Elon Musk has oscillated in his statements about the coronavirus pandemic. As noted above, Musk tweeted back in March that panic over the illness was “dumb,” and soon thereafter, he said both the “virality” and the “fatality rate” associated with Covid-19 were “overstated.” Later that month, the billionaire wrongly predicted that there would be “close to zero new cases” by the end of April, and he falsely claimed, “Kids are essentially immune.”

Musk has a clear financial interest in resuming business as usual, and he’s been pushing hard for it. After criticizing the notion of “forced isolation,” Musk cheered on the reopening of Texas, writing that factories should “reopen with care & appropriate protection, but don’t put everyone under de facto house arrest.” On a Tesla earnings call, he also called Covid-19 social distancing orders “fascist.”

In Musk’s view, it’s apparently unfair that local and state governments have allowed certain types of manufacturing in California and the rest of the country to reopen. Tesla, he and many of his supporters seem to believe, is the victim of an uneven approach to resuming production.

Gov. Newsom, meanwhile, has remained relatively soft-spoken on the Tesla controversy. After affirming that localities do have the right to reopen at their own pace, the California governor described himself in a Monday press conference as “a strong advocate, supporter, and early adopter” of Tesla technology and said he expected the company could, in negotiation with Alameda County, probably open next week. In fact, the Tesla factory had already reopened, and when a reporter asked about a photo showing a full parking lot at the Fremont facility that morning, Newsom said, “When I walked up to the podium this morning, that wasn’t the case.”

There’s evidence that other government officials were willing to negotiate with Tesla, too. Days before Musk’s defiant decision, the mayor of Fremont, Lily Mei, seemed to encourage the idea of allowing Tesla to reopen. “We know many essential businesses have proven they can successfully operate using strict safety and social distancing practices,” she said in a May 9 statement that specifically mentions Tesla. “I strongly believe these same practices could be possible for other manufacturing businesses, especially those that are so critical to our employment base.”

But while California officials debate how best to handle the Fremont factory situation, other states are responding to Musk’s threat to move Tesla headquarters out of California. Texas leaders, including Rep. Dan Crenshaw and Gov. Greg Abbott, seem interested in welcoming the company to Texas, and the Las Vegas mayor wrote Musk a letter encouraging a move to Nevada.

Reopening factories will be a messy process nationwide

Musk’s complaint about other American automotive factories being given the green light to reopen is not incorrect. However, these factories are in other states. Toyota has restarted work at several plants, including one facility in San Antonio, Texas. Michigan is also allowing manufacturing work to resume May 18, which will open up production for the Big Three American auto giants.

The Trump administration has made it clear that decisions about reopening local business are up to the state and local governments. As public officials have repeatedly made clear, reopening the country will not be a uniform process, and manufacturing facilities in areas less impacted by the Covid-19 pandemic will inevitably get a head start over their competitors. We also know that reopening factories, specifically, comes with the risk of new outbreaks. American meatpacking plants have become hot spots for Covid-19 cases due in part to workers being close together on the line.

Despite these and other concerns, Tesla decided to violate local public health guidance and return its workers to the factory. In a recently released “Return to Work” playbook, Tesla lays out new measures for employees returning to work, including temperature and symptom checks, touchless surfaces, and lots of protective equipment, some of which it will be employees’ responsibilities to acquire. The extent to which measures like these will be effective at protecting workers is debatable.