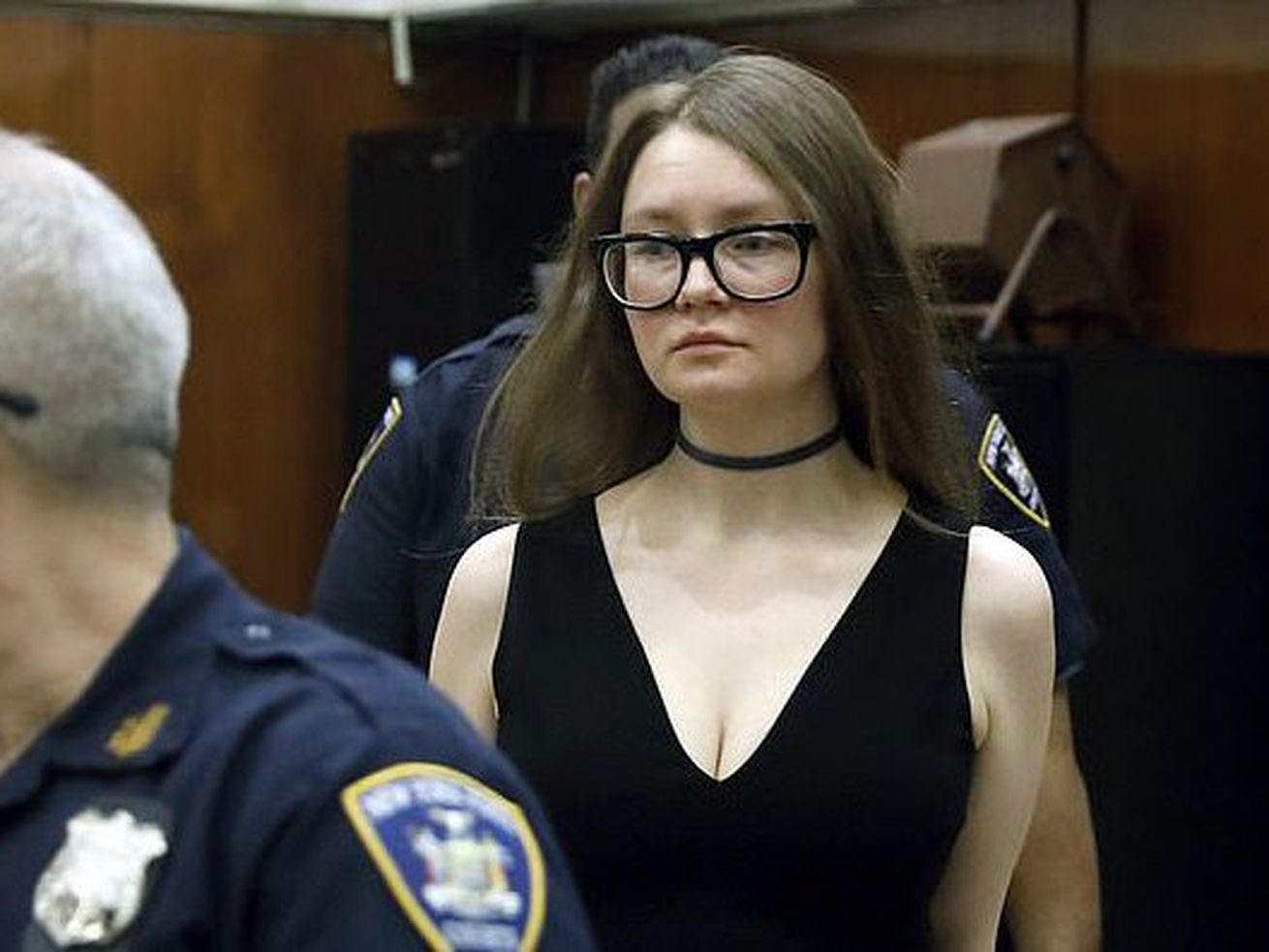 Not the royal kind of court.

Anna Sorokin appeared in court on Wednesday, March 27, in a form-fitting black designer dress, a black choker, and oversized glasses. Her long brown hair was down and straight; it almost looked blown out, though it is difficult to imagine that people being held at the Rikers Island jail are allowed hair dryers.

These details are only worth noting because Anna Sorokin is on trial for crimes she allegedly committed while posing as a German heiress — she grifted her way into New York society, the accusations go, and scammed banks and hotels along the way. The purported scam succeeded for years, in part because Sorokin, who lived under the name Anna Delvey, cultivated a character: Not only did she imply that she had a rich-girl bank account, she also wore rich-girl clothing.

And while many defendants attempt to appear in court as though they have left their old ways behind, Sorokin did not. In fact, her high-end, low-cut dress and hipster eyewear looked just as stylish as anything Sorokin would have worn when she was posing as Anna Delvey. There’s a reason why: According to Rachel Tashjian at GQ, her defense team has hired professional stylist Anastasia Walker to dress her for the trial.

The story of Anna Sorokin was the cherry on top of 2018’s “summer of scam,” captured in an explosive New York Magazine investigation and a Vanity Fair tell-all. It’s now the subject of forthcoming projects from both Netflix and HBO, produced by Shonda Rhimes and Lena Dunham, respectively.

Our collective appetite — for scam stories in general and for Sorokin’s history in particular — is far from satisfied. And throughout her trial, where she faces charges of grand larceny, attempted grand larceny, and theft of services for the amount of $275,000 over a 10-month period, the public will watch one of the year’s most famous alleged scammers come face to face with the truth. There’s no doubt that what Sorokin looks like during the trial will matter just as much as what she looked like as Anna Delvey.

Who is Anna Delvey — er, Sorokin?

Anna Delvey became the subject of widespread fascination in April 2018 with the publication of a Vanity Fair piece written by a woman whom Sorokin had allegedly scammed out of $62,000. About a month later, New York Magazine’s The Cut published a full account, tracking Sorokin’s journey from her upbringing as the Russian daughter of a truck driver to a fixture of New York City’s party scene, to, finally, awaiting her trial.

Under the name Anna Delvey, Sorokin made fast friends with wealthy New Yorkers in the art and fashion industries, as well as with international trust-fund kids (for whom a mysterious backstory was practically de rigueur). She expressed dreams of creating a Soho House-type club, but for art, and was desperate for a major loan to do so. She never received one, however, and was left to swindle supposed short-term favors from banks, hotels, and friends.

The act succeeded for so long because, by dropping enormous tips and alluding to the fact that she was a German heiress (Sorokin’s family had moved there when she was a teenager), Sorokin’s friends and colleagues assumed she had the kind of money that would assure her bill would always be paid. She often convinced hotels to let her stay for long periods of time without providing a credit card, instead telling them that a wire transfer would be made eventually.

The fact that those wire transfers never came is ultimately what caused her downfall. In July 2017, the Post reported on the “wannabe socialite” busted for skipping out on hotel bills, along with her real last name. She has been held at Rikers Island without bail since October 2017, and has rejected a plea deal and pleaded not guilty.

Why it matters what we look like in court

The nature of her crime is why Sorokin’s courtroom dress — which the New York Post reported was Miu Miu but according to GQ is Michael Kors — is somewhat surprising. Lawyers routinely advise their clients on how to dress for trial; some even provide appropriate clothing to their clients who may not be able to afford any. This, of course, is because what we wear to court matters: Studies have shown that juries convict attractive people less often and that defendants wearing prison-issued uniforms are convicted more often than those wearing dressy attire. And of course, Sorokin has the advantage of being white — black men have been shown to receive longer sentences than white men for committing the same crime.

And while the standard courtroom uniform for male defendants is undoubtedly a suit, for women, it’s thornier. Elle magazine studied the attire of famous female defendants over the decades and found that lawyers often try to present their clients in outfits that look markedly different from those that they were associated with in the press. Amy Fisher, the “Long Island Lolita,” for instance, wore dark, conservative business suits, while Patty Hearst was made to look young and girlish.

Sorokin’s team and stylist is surely aware of this. During the trial’s jury selection, Sorokin showed up to court wearing a standard beige prison uniform. But according to the New York Post, defense lawyer Todd Spodek ran to H&M to spend $200 on a black blazer, black capris, and a beige sweater so that when she reappeared later that day, she didn’t look like an inmate. (He also tried to bring her stiletto heels, but the Department of Correction apparently deemed them too dangerous; she wore white Pumas instead.) GQ also reported that Sorokin would be dressed the next day in an Yves St Laurent blouse and Victoria Beckham pants. It’s as yet unclear who’s paying.

A few people have written about the curious aesthetic of Anna Sorokin. In Garage, Rachel Tashjian suggested Delvey’s sloppy decoupage of designer brand names like Alaïa and Balenciaga and everyday uniform of athleisure by Supreme supported her ruse as a rich girl because she didn’t conform to our expectations of what wealthy people wear. The argument, then, is that actually wealthy people can get away with wearing essentially whatever they want, and being rich does not necessarily equal good taste.

Amanda Mull wrote in the Outline that despite the fact that Delvey claimed to have utilized the services of Sally Hershberger, one of New York’s top salons, “anyone with even a moderate interest in personal care could see that well-trained professionals were rarely, if ever, in contact with her head.”

SHE ADDED A SWEATER AFTER LUNCH SHE CAN DO IT ALL. No one manipulates an audience with clothing better than this woman!!!! pic.twitter.com/dCi3KGpHja

Maybe both of these arguments, then, could explain why Sorokin’s courtroom designer dress is so Delvey-esque: She was never particularly adept at self-presentation to begin with. It’s similar to why Elizabeth Holmes, the disgraced former CEO at the center of the Theranos scandal who meticulously crafted her voice and turtlenecks to apparently mimic male tech luminaries, always seemed to neglect her hair and makeup. These confusing, often contradictory rules of female appearance seem to elude both, but in different ways.

By the time Sorokin returned from lunch, she was wearing a camel crew-neck sweater on top of the low-cut dress. Whether that’s because she was chilly or because someone on her team was worried about the appropriateness of visible cleavage is impossible to say — though very little about courtroom dressing is unintentional, particularly for someone charged with committing one of the most fashionable crimes in recent memory.