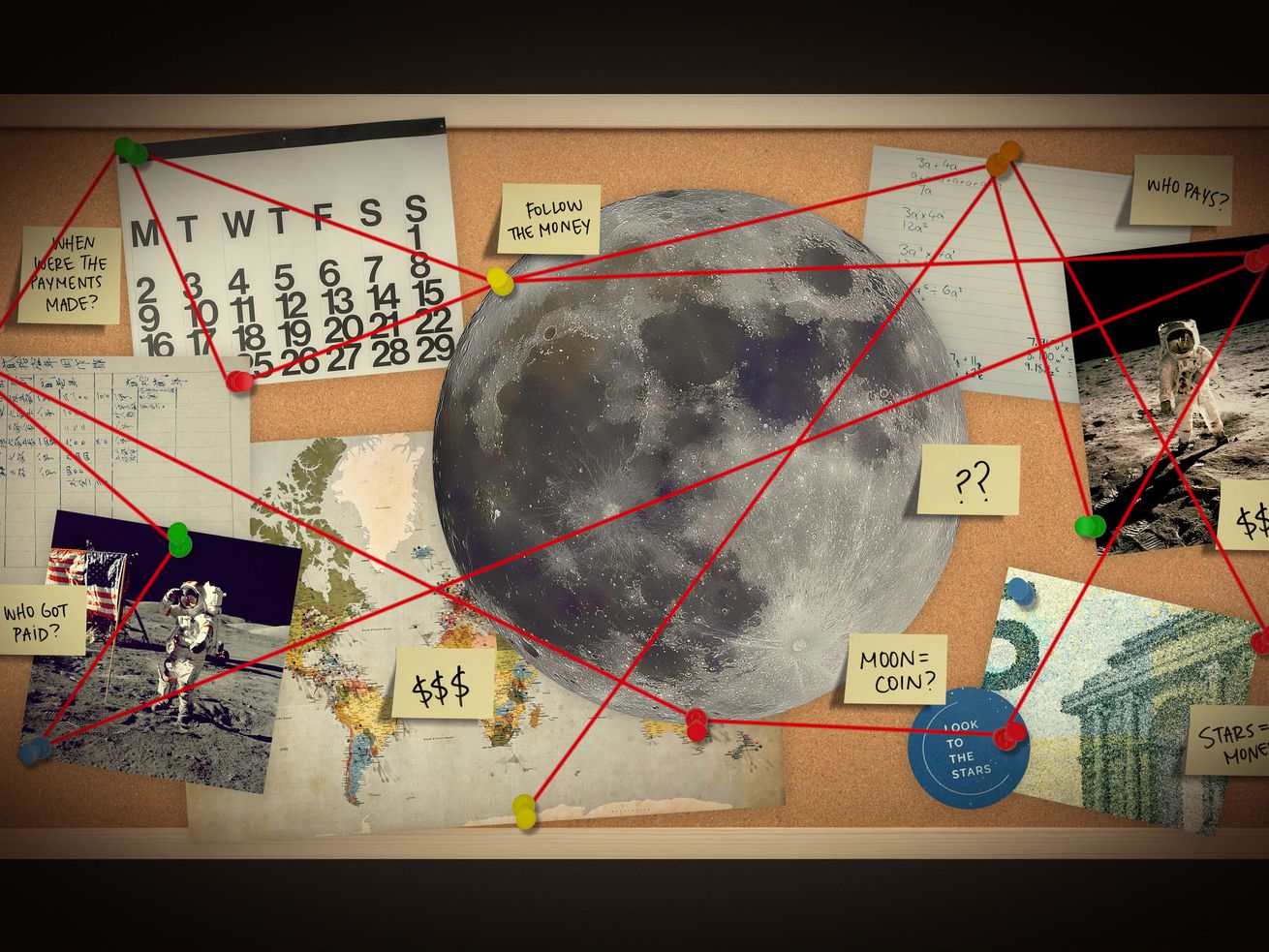 An almost-serious investigation into the money behind the moon hoax theory.

The first step on the path to recovery is admitting that the more you listen to moon landing conspiracy theories, the more you start to believe them.

What finally got me were the crosshairs. Crosshairs! The word itself sounds like it belongs on a bulletin board covered with a laserlike web of red yarn. But you tell me why some of the camera’s crosshairs appeared to be behind objects in NASA’s moon landing photos? You can’t!

It turns out, though, you can. You can also disprove literally every moon landing conspiracy claim, of which there are many dozens. On July 20, 1969, the Apollo 11 Lunar Module landed on the moon. We have irrefutable proof of this; still, anywhere from 6 to 20 percent of Americans do not believe it actually happened, depending on your source, with an additional (and far more bewildering) 5 percent who said in a 1999 Gallup poll that they were “undecided.”

But the moon landing hoax theory has persisted for decades due to the simple fact that if you don’t think about it too hard, it sort of makes sense. The motive is there: The US really wanted to beat the Soviet Union to the moon, and Sputnik forced NASA into action. The technology was there (although this Adam Ruins Everything segment explains why actually, it wasn’t), because 2001: A Space Odyssey had come out a year before and showed realistic footage of a studio-simulated space.

Plus, the feat seemed physically impossible: Wouldn’t the Van Allen radiation belts kill astronauts before they got to the moon? (No, because the spaceship only moved through them for a few hours, not days.) And how were computers from the ’60s supposed to launch a rocket that went 239,000 miles? Weren’t they basically just calculators? Seems fake!

And then there is the dubious physical evidence of the moon landing, which has been dissected by conspiracy theorists for decades. In photos, shadows appear at multiple angles, but shouldn’t there just be a single light source in space, the sun? Why was the American flag waving when there is no wind in a vacuum? Why wasn’t there a crater where the Apollo landed? Why would astronauts’ boots make footprints when there’s no water on the moon? What about the crosshairs? The crosshairs!!!

I just spent like 30 minutes reading about the moon hoax theory for my class and I’m just saying @NASA starting to look a lil sus pic.twitter.com/1yLuHxbaW2

This is only a sampling of supposed evidence that the moon landing was faked, all of which has been debunked, repeatedly, for decades. And yet a steady gurgling of moon truther ephemera has remained since the 1970s, from books to documentaries and now, YouTube videos. Someone must benefit from insisting that Neil Armstrong and Buzz Aldrin didn’t walk on the moon, right? Otherwise, why would so many people still believe it?

So I did what conspiracy theorists do, and followed the money.

To understand who’s making money off moon landing conspiracy theories, you have to go back in history, starting with the first major book written about it. What would you call your book about the fact that we never went to the moon?

We Never Went to the Moon (subhead: “America’s Thirty Billion Dollar Swindle”) was written in 1976 by a man called Bill Kaysing, who according to the tribute website BillKaysing.com was also known as “Wild Bill Kaysing” and is widely considered the father of moon landing hoax theories. (Kaysing died in 2005.)

Kaysing’s claim to expertise was that in the early 1960s, he had worked as a technical writer for Rocketdyne, a rocket design and production company, and alleged that the job had given him access to documents proving that the Apollo mission was a hoax.

But because Kaysing self-published his seminal book, it’s impossible to know how much money he actually made from inventing one of the most popular conspiracy theories of all time. He spent the rest of his life appearing on talk shows, likely for modest sums of money, and went on to write and self-publish other books called How to Eat Well for a Dollar a Day. Kaysing was also critical of corporations and “Madison Avenue” and advocated for the homeless, according to his website.

Paperback editions of We Never Went to the Moon are currently being sold on Amazon for the rather high price of $44.99, though it is also the 921,946th most popular book on the website, which is not very popular. Someone is making money, however, but it is not Kaysing; instead, it is the CreateSpace Independent Publishing Platform, which is owned by Amazon.

$$$: Probably very little, but at least some of it is going to Amazon!

One television network definitely made money off the moon landing conspiracy

One of the programs Kaysing appeared on was a controversial 2001 Fox TV special called “Conspiracy Theory: Did We Land on the Moon?” which effectively answers its titular question with a big “no.” It presented evidence that suggested that NASA had faked the moon landing, and sparked considerable doubt among the public. In 2002, one of the conspiracy theorists who appeared on the Fox show harassed Buzz Aldrin on the street, asking him to swear on the Bible that he actually went to the moon. Aldrin then punched him in the face, and there is a video of it.

Fox officials claimed to the Salt Lake City paper Deseret News that after “Did We Land on the Moon?” aired, American skepticism of the moon landing increased to 20 percent, and afterward, the Today show aired a debate about it. But did Fox make money off it?

$$$: At least a couple million for Fox and ultimately for Rupert Murdoch, who wouldn’t consider that very much money at all.

But are any moon truthers making money on YouTube?

Even though many of the original moon truthers who appeared on TV talk shows and documentaries throughout the ’90s and early 2000s are now dead, there has to be a new generation of hucksters on the most conspiracy theory-friendly platform of the 21st century, right?

Wrong, although this may be more of a recent development. Now that there have been several violent crimes committed by people radicalized via YouTube videos, the company has said that it will recommend fewer conspiracy theory videos, and those expressing doubt about widely accepted events will include an informational text box linking to third-party sources. That’s why pretty much all moon landing conspiracy theory videos on YouTube now contain this:

Plus, making money strictly off YouTube advertisements is increasingly difficult, and most moon landing conspiracy videos are virtually harmless considering their low production value or lack of substantial views, like my favorite example of a guy in sunglasses and a yellow vest combing through the original moon landing issue of National Geographic. (Hilariously, the pre-roll advertisement I got for this video was a MasterClass with NASA astronaut Chris Hadfield.)

There is one exception to this: Shane Dawson, who built a subscriber base of 22 million in part by making conspiracy theory videos aimed at teens and kids. His moon landing video, which has 7 million views, stops short of saying that he actually believes NASA faked the moon landing, but admits it was what sparked his interest in conspiracy theories.

This video is making money for Dawson — there are ads on it, and there is notably not one of YouTube’s Apollo 11 disclaimer boxes in the description. According to Social Blade, which tracks YouTubers’ stats and estimated earnings, a video with 7 million views would earn him anywhere between $3,500 and $28,000, depending on ad revenue.

Seems like the money keeps rising to the top! Hmm!

The average YouTuber isn’t Shane Dawson, however, and neither is the average moon landing truther. Dawson seems to be one of the few individuals making actual money off peddling moon landing conspiracy theories. But notably, his moon landing video isn’t anywhere near his most-viewed conspiracy videos, so one couldn’t argue that Dawson is making his living off the moon landing theory alone.

As in most economies, the moon landing conspiracy economy drives the money all the way to the top: The top booksellers (Amazon), the top TV networks (Fox), and the top YouTubers (Dawson). Which means that those who benefit the most from people believing in moon landing conspiracies are those already in power! Maybe that’s why some of our most visible truthers are very famous celebrities: Kyrie Irving, Steph Curry (though he later said he was joking), Frank Ocean, Whoopi Goldberg, Marion Cotillard.

Meanwhile, true believers like Bill Kaysing and his modern-day counterparts like Martin Kenny and Did We Go? director Aron Ranen are left to appear for presumably little money on documentaries and TV spots in which they make Glenn Beck sound like the rational one. They are, one could argue, but lowly foot soldiers in the establishment’s war to brainwash American into believing we didn’t actually go to the moon.

I am the conspiracy theorist now

This is obviously a conspiracy theory itself, but it is one that, much like the moon landing hoax, I am starting to believe the more I think about it. Maybe the question is no longer “Did we go to the moon?” but “Who benefits by suggesting that we didn’t?” Am I the conspiracy theorist, or is perpetuating conspiracy theories as entertainment a far greater danger to society?

Let us begin again with the facts: On July 20, 1969, the Apollo 11 Lunar Module landed on the moon. Today, 50 years later, we live in a world in which people have threatened to kill others, spurred by their belief in conspiracy theories, in a country whose president has propagated more than a dozen of them as though they were fact.

Conspiracy theories have become so normalized in the latter half of the 2010s that the most publicized ones involve things like a secret network of omnipotent celebrities, a child sex ring run by Democratic politicians, or the earth being literally flat. These are wild things to genuinely, actually believe, yet they come at the same time that a “fact” has come to mean whatever audiences feel like believing.

I personally do not think the moon landing hoax theory will suddenly become extremely popular in our current cultural moment, however, and here is why: The moon landing has nothing to do with you or me. It does not directly implicate the self, which is all human beings’ favorite subject. Claims that vaccines cause autism or that a single vegetable is covertly wreaking havoc on the guts of all Americans or that putting a $66 egg up one’s vagina will “regulate your hormones” are all bullshit, of course. But believing them allows us to expend further mental energy on ourselves, which we very much love to do.

These beliefs then also get to become part of our identities: You become someone who “can’t eat corn” or someone who makes a “brave” choice for their children, even if that choice puts people in danger.

In comparison to all these things, the belief that the moon landing was shot in a Hollywood studio actually seems sort of quaint. How cute, a theory that probably won’t end up hurting someone! Perhaps on the 50th anniversary of the NASA moon landing — which definitely happened — we can appreciate the moon landing conspiracy for what it was: a mostly harmless piece of entertainment that possibly also led to the normalization of conspiracies in general, which is harmful.

Sign up for The Goods’ newsletter. Twice a week, we’ll send you the best Goods stories exploring what we buy, why we buy it, and why it matters.