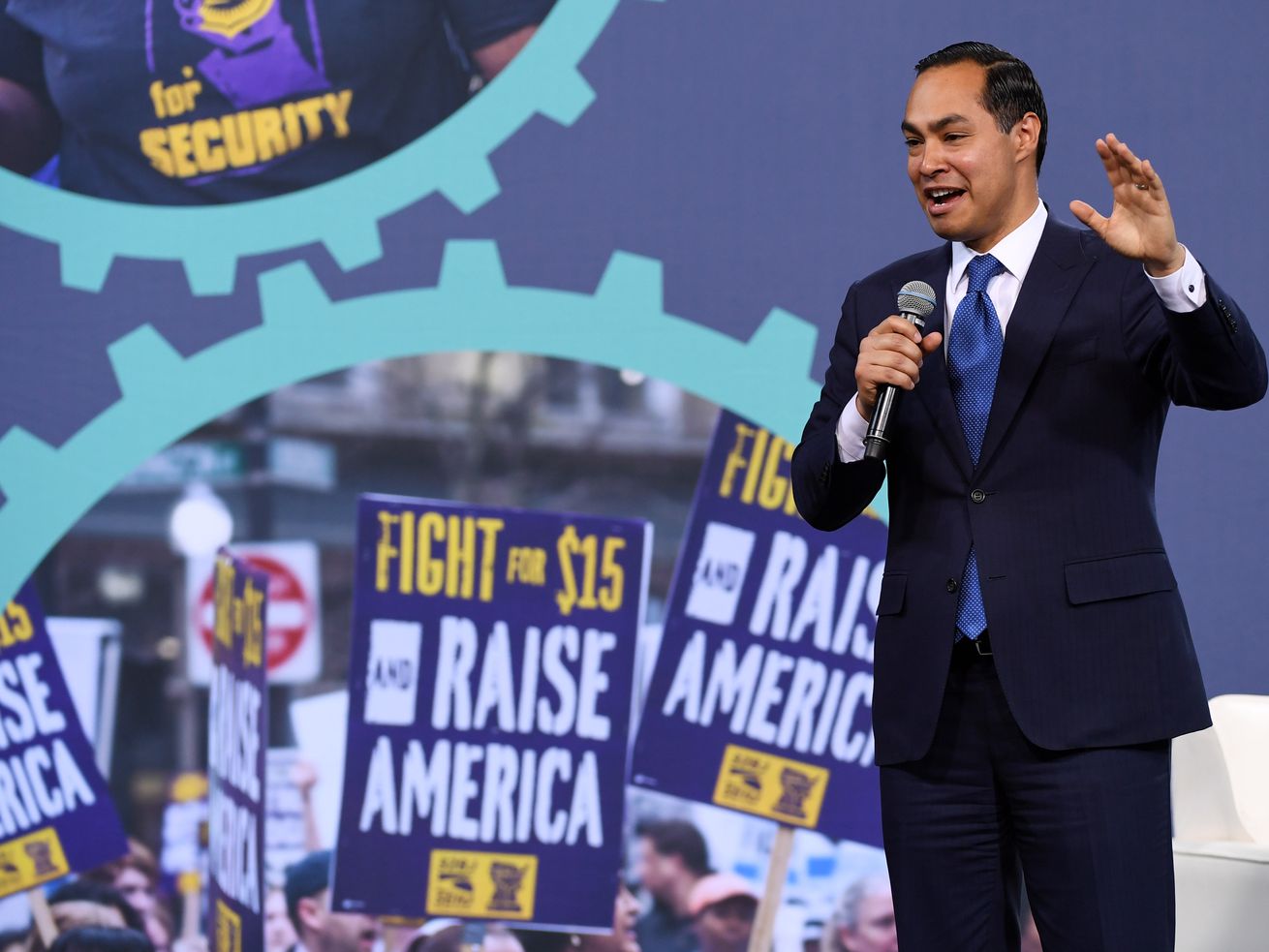 The idea of a $15 federal minimum wage is no longer a fantasy. The vast majority of 2020 candidates running for the Democratic presidential nomination have now endorsed it.

The current federal minimum wage has been stuck at $7.25 an hour since 2009, and workers are increasingly frustrated to see their paychecks grow so little as the economy thrives. In 2018, about 1.7 million people were working jobs at or below the federal minimum wage. The vast majority of them are adults, not teenagers.

Particularly enthusiastic endorsements from Hickenlooper and Klobuchar, who have positioned themselves as centrists in a field of progressive candidates, shows how far elected Democrats have moved on an issue that has divided lawmakers for more than a decade. Six states and the District of Columbia recently hiked minimum pay to $15 an hour, and Democrats in Congress are considering a bill that would do the same. With so many presidential contenders on board too, the chances of doubling the federal minimum wage are better than ever.

Vox recently checked to see how many other Democratic hopefuls feel the same way. Turns out 19 of them do (based on their endorsement of the Raise the Wage Act, statements from their campaign press office, public statements, or campaign websites). Only Sen. Michael Bennet (D-CO) prefers a $12 federal minimum wage. A handful of candidates — Andrew Yang, Bill de Blasio, Jay Inslee, and Wayne Messam — have not yet responded to Vox’s inquiry, and their positions remain unclear.

Here are the candidates who support a $15 federal minimum wage

“I stand strongly with you in your fight for $15,” Klobuchar said during the National Forum on Wages and Working People in Las Vegas, which was organized by the Service Employees International Union and the Center for American Progress Action Fund. “We must get a $15 federal minimum wage.”

Hickenlooper went even further, saying at the forum: “Where living costs are higher, like New York, Los Angeles, and maybe Las Vegas, we will go above $15 an hour.”

Montana’s Gov. Bullock also went beyond the standard support. “Governor Bullock supports raising the federal minimum wage to $15 an hour, while recognizing regional differences — in some regions that may not be enough, while in others an increase to $15 over a greater period is warranted,” his campaign’s communications director, Galia Slayen, wrote in an email to Vox.

Slayen pointed out that Bullock has a record to prove his commitment. In 2005, before running for office, he led a successful campaign to raise the state’s minimum wage via ballot initiative, indexing it to inflation. In January, cost of living adjustments boosted minimum pay in the state to $8.50 an hour.

Other centrist Democrats are also on board with a $15 minimum rate at the federal level. Former Rep. Delaney (D-MD), a business leader who recently represented an affluent DC suburb in Maryland, centered a $15 federal minimum wage on his campaign website:

No American should still live in poverty if they work full time. Period. The minimum wage has long served as a protection to ensure that workers could make a living, but due to increases to the cost of living, the minimum wage’s inflation-adjusted value has declined by more than 37% since 1968.

Even former Vice President Biden, the candidate who most represents the Democratic establishment, recently endorsed a $15 minimum wage:

Companies continue to squeeze every last penny out of workers, making it harder and harder for Americans to make ends meet. It’s way past time we make a $15 minimum wage the law of the land.

Such overwhelming support for a $15 minimum wage may seem like a seismic shift, but it’s not surprising.

It makes sense that presidential candidates are embracing a $15 wage these days: American voters want lawmakers to lift the pay floor. Poll after poll shows widespread support for raising the federal minimum rate, even among Republican voters. And a majority of voters want at least $15 an hour.

Fast-food workers across the country have done the most to make this happen. Within the past five years, as part of the “Fight for $15” movement, they’ve transformed an improbable proposal into a popular policy — one that addresses, in part, the slow wage growth American workers are experiencing.

Fast-food workers urged state lawmakers in California to pass a bill, and in 2016 they did, making California the first state to raise minimum pay to $15 an hour. Then came Massachusetts, New York, DC, Illinois, New Jersey, and Maryland. In May, Connecticut became the seventh state to do so.

The influential SEIU has been instrumental in organizing the Fight for $15, which helps explain why presidential hopefuls are so eager to support the policy. All of them are seeking the coveted endorsement of the union, which represents more than 1 million janitors, housekeepers, and catering workers.

At the federal level, a $15 minimum wage phased in by 2024 would directly lift the wages of 28.1 million workers, according to calculations by the left-leaning Economic Policy Institute. That would add up to an average 20 percent raise for year-round workers.

Now, for the first time, Democrats in Congress are seriously considering it.

Congress has never gone this long without raising the minimum wage

Congress set a record this month: It’s now been more than 10 years since lawmakers have raised the federal minimum wage, the longest period in history that it’s stayed stagnant.

The current $7.25 minimum hourly rate was set in 2009, right in the middle of the Great Recession. Since then, America’s lowest-paid workers have lost about $3,000 a year when you consider the rising cost of living, according to calculations from the Economic Policy Institute.

If 2020 candidates are serious about doubling the federal minimum wage, they’ll have allies in Congress to do so.

In January, House Democrats introduced the Raise the Wage Act, which would eventually raise the federal minimum wage to $15 an hour by 2024. The law would also tie future changes to changes in median workers’ pay. So if middle-class wages go up — or down — so would the minimum wage.

The bill, which has more than 200 co-sponsors (all Democrats), would also phase out the lower minimum wage for tipped workers such as restaurant servers and valets, which has been $2.13 an hour since 1996.

Business groups are not happy about the fight for $15. Neither are their Republican allies in Congress, who have long pushed back against any effort to raise the federal minimum wage, claiming it would destroy small businesses and trigger massive job losses.

Lately, they’ve sensed a shift in public opinion. McDonald’s executives recently announced that the company would no longer lobby against minimum wage increases. The president of the US Chamber of Commerce said earlier this year that he was open to the idea of raising the pay floor but didn’t say by how much.

Meanwhile, Democrats have been torn on how much to raise wages. Rep. Terri Sewell (D-AL) introduced an alternative bill in April, which would create different minimum wage levels depending on the region. Only businesses in the most expensive areas would have to pay workers at least $15 an hour by 2024. So far, only 11 other House Democrats support the bill, and no Republicans are interested in it either.

The main problem with that bill, however, is that every state needs to hike minimum pay. There’s really nowhere in the country where minimum wage workers can afford to rent a modest two-bedroom apartment if they work full time.

In the past few weeks, however, Democrats have signaled that they have enough members on board to pass the $15 wage bill, according to the Hill. They’re planning to vote in August.

The bill would more than likely die in the Senate, or as Senate Minority Leader Chuck Schumer calls it, Mitch McConnell’s “legislative graveyard.” But if things turn out well for Democrats in 2020, there’s a good chance the next president will sign a bill to double the federal minimum wage, giving 28 million workers a raise.