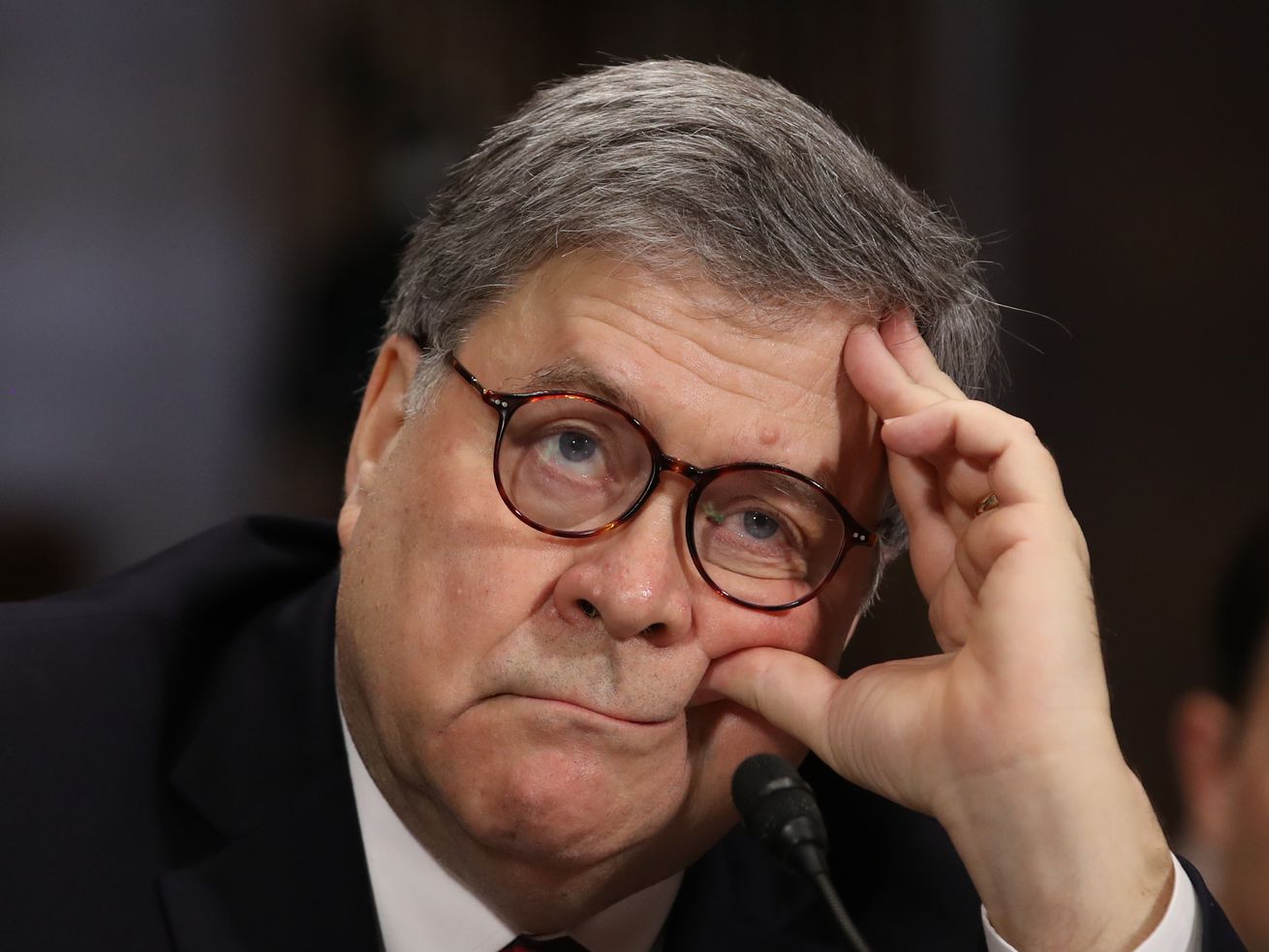 Democrats delayed suing for the full Mueller report, but the contempt of Congress vote against Barr is still on.

House Democrats have reached a deal with the US Department of Justice to get the unredacted parts of the Mueller report they have been demanding, and are suggesting they will stop pursuing a criminal contempt citation against Attorney General William Barr — at least, for now.

“Given our conversations with the Department, I will hold the criminal contempt process in abeyance for now,” House Judiciary Committee Chair Jerry Nadler said in a Monday statement. “If the Department proceeds in good faith and we are able to obtain everything that we need, then there will be no need to take further steps. If important information is held back, then we will have no choice but to enforce our subpoena in court and consider other remedies.”

NEWS: Nadler announces they’ve reached a deal with DOJ to obtain “key evidence” on from Mueller’s files on obstruction of justice.

But an aide tells me tomorrow’s CIVIL contempt vote on the House floor is still on.

But a full House vote on Tuesday is still scheduled to authorize the committees to go to court to enforce civil contempt of Congress citations for Barr and former White House counsel Don McGahn in the future, a Democratic aide confirmed to Vox.

In other words, Nadler just announced he’s planning to hold off on taking Barr to court for parts of the Mueller report. But if he changes his mind, the full House vote on a civil contempt of Congress resolution would ensure he and other committee chairs will still have that tool available later on.

Tuesday’s vote is part of an effort by House Democrats to up the ante in their attempts to get Trump administration officials to comply with their subpoenas. Frustrated by months of missed subpoena deadlines and pushback from the administration, the House Judiciary Committee first passed a contempt resolution along party lines last month, after Barr failed to deliver Mueller’s complete, unredacted report by a committee deadline.

A contempt vote is one way for Congress to get subpoenaed documents, by asking the US attorney for the District of Columbia or the Department of Justice to charge Barr with criminal contempt for not complying with a congressional subpoena. In theory, a charge of contempt could result in a fine or jail time for the attorney general (though in reality, that likely won’t happen).

In essence, a contempt of Congress vote is a way to take future court action to get documents and witnesses the Trump administration won’t willingly provide, whether it’s the Mueller report, or the president’s financial information.

Tuesday’s vote is a reaction to escalating actions from Trump, like the president asserting executive privilege last month to block the House from accessing the entire Mueller report and its underlying documents — the first time Trump used his executive powers to protect portions of Mueller’s findings.

Barr’s main objection to releasing the full report is regulations that prohibit releasing grand jury material to members of Congress. The attorney general has offered Democrats a less redacted version of Mueller’s report, but they’ve so far rejected the offer. They want the full thing — or at least, most of it.

The threat of a vote has seemed to have paid off, at least in the short term. But if the past few months have shown anything, it’s that the Trump administration could change its mind at any moment.

Here’s how contempt of Congress works

A House vote on a contempt of Congress citation isn’t coming out of nowhere; the Trump administration has blocked the Judiciary Committee’s subpoena for the Mueller report, as well as many other House subpoena requests.

Contempt of Congress citations are a tool the House or Senate can use in cases where their subpoena requests are repeatedly denied. Congress is essentially arguing that the executive branch is stonewalling and getting in the way of its ability to conduct its constitutionally obligated oversight.

But it’s crucial to remember Congress is just making another a request here, albeit a more strongly worded one. Actually getting the executive branch to comply can be difficult, precisely because the executive branch is the one with the power to prosecute the individual who isn’t complying with the subpoena request.

How this will work on a practical level: If the full House passes the contempt resolution, House Speaker Nancy Pelosi will issue the citation for Barr to be held in contempt. She’ll pass that citation along to the US Attorney’s Office for the District of Columbia or the Department of Justice. Either the US attorney or the DOJ will likely say they don’t plan to move forward with prosecuting Barr.

That would be the end of the matter, unless Democrats pass a separate resolution to authorize going to court with Barr and the Trump administration over the Mueller report, and getting the courts to decide their subpoena request and contempt citation.

That is Tuesday’s vote, which Democrats are doing before they decide to use their own power of inherent contempt to fine or jail the attorney general or other Trump officials.

“We need to do the contempt parts before House counsel goes to litigate in court,” Rep. Ted Lieu (D-CA) told reporters last month. “The first option would be to win in court; we have a very strong case.”

Democrats are feeling confident because the Trump administration has moved to block or deny every single subpoena request of theirs, not just the one for the Mueller report. At least one former Justice Department official in the George W. Bush administration thinks Trump’s broad refusal could potentially hurt his legal argument.

“The thing that’s unusual is the blanket refusal,” John Yoo, the former deputy assistant US attorney general in the Bush DOJ’s Office of Legal Counsel, told the New York Times. “It would be extraordinary if the president actually were to try to stop all congressional testimony on subpoenaed issues. That would actually be unprecedented if it were a complete ban.”

That itself is risky. If a judge rules against Congress and in favor of the Trump administration, it could set new legal precedent that could make it easier for future presidential administrations to withhold information from future congressional committees.

But if the court rules in Democrats’ favor, it could strengthen Congress’s legal standing and could compel the Trump administration to comply with the subpoenas, with more serious consequences for noncompliant officials. For instance, a judge could hold administration officials in contempt of court, rather than contempt of Congress.

Democrats have already had some success in the courts; two federal judges have upheld their subpoenas of Trump’s financial information in the House Oversight and Financial Services committees. Feeling emboldened by these early wins, Pelosi wants Democrats to keep pushing forward on investigations.

Congress technically has another option that gives it much more power to prosecute noncompliant individuals, called inherent contempt power. But the lawmakers probably won’t use it.

The contempt of Congress citation the House will vote on next week is very different from inherent contempt power: Congress’s ability to arrest or jail people who don’t comply with subpoena requests.

As Garvey explained in his summary, this is how Congress used to make sure people complied with its subpoena requests if they refused, beginning in the 1850s and ending in the 1930s. Congress can do this (the Supreme Court has upheld its ability to do so), but it hasn’t since the 1930s because, well, throwing people in jail is a bit harsh:

Upon adopting a House or Senate resolution authorizing the execution of an arrest warrant by that chamber’s Sergeant-at-Arms, the individual alleged to have engaged in contemptuous conduct is taken into custody and brought before the House or Senate. A hearing or “trial” follows in which allegations are heard and defenses raised.

If judged guilty, the House or Senate may then direct that the witness be detained or imprisoned until the obstruction to the exercise of legislative power is removed.

As Garvey writes, Congress detaining these people isn’t meant to be a punishment so much as an added incentive to produce the information more quickly.

Lately, some Democrats have been talking about it as a way to put some more teeth into their subpoena requests.

“We have the power to detain and incarcerate,” Rep. Gerry Connolly (D-VA), a member of the House Oversight Committee, told reporters last month. “We don’t use it. … Doesn’t mean we can’t, and I’m all for reviving it.”

When asked where Congress would put members of the Trump administration, Connolly pointed to DC’s jail.

“We have, as you know, jurisdiction over the District of Columbia,” he said. “And they have a beautiful jail with plenty of room. So I think that would be just perfect for some of these people to contemplate their actions and judgment.”

To be clear, there’s no real indication that Democrats are ready to revive their inherent contempt power for Barr and McGahn, and it likely would be a tool of last resort. The attorney general is likely not headed to jail, especially if the department he oversees is in charge of deciding whether to prosecute him. What matters now is Democrats deciding to pursue a court case against the attorney general and former White House counsel, and if a judge holds them in contempt of court instead.

Passing a contempt of Congress citation is just the first step.