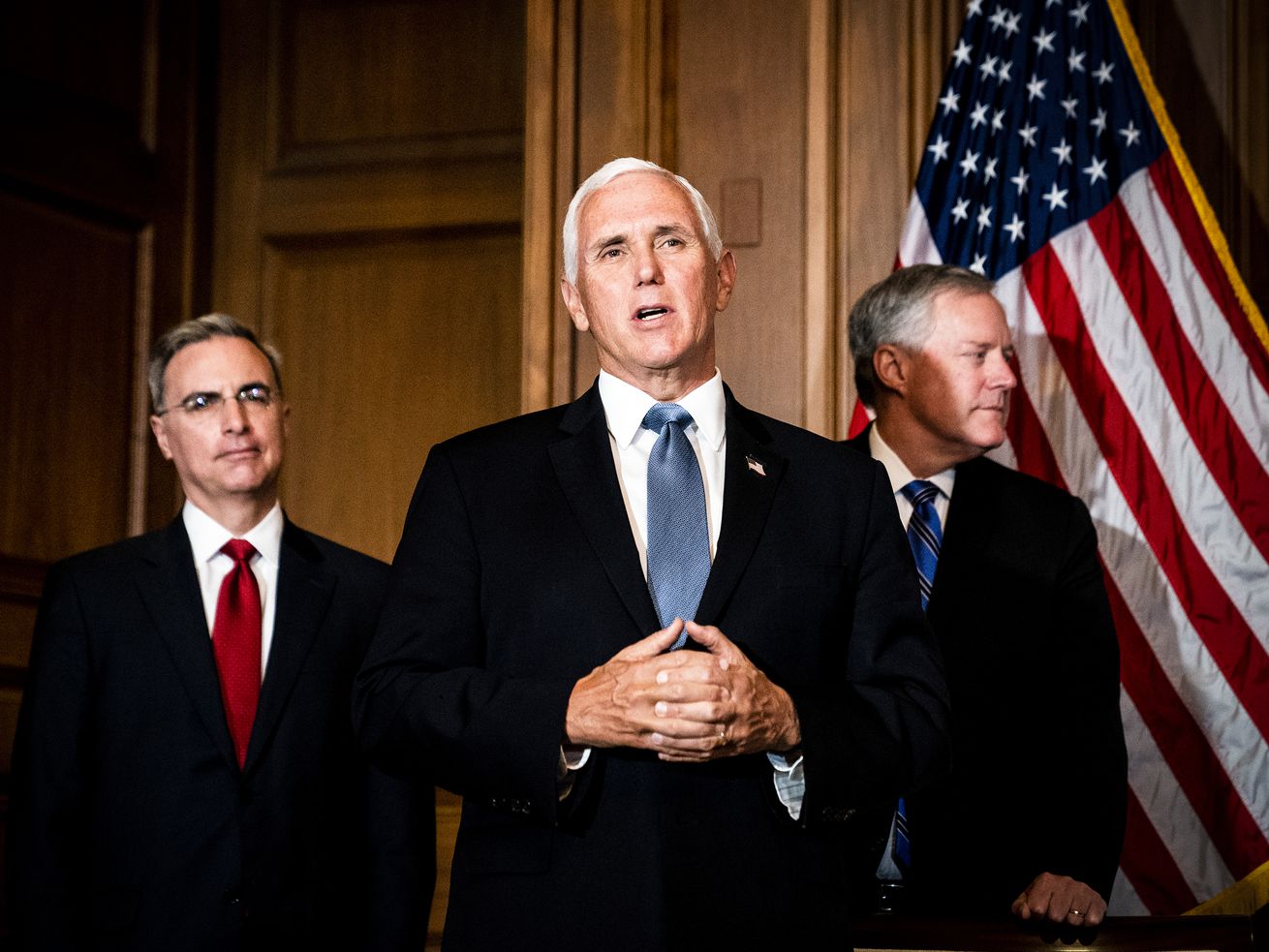 The 25th Amendment created a process by which the president can temporarily give up his powers — or have them taken from him — because he is deemed “unable” to do the job. | Erin Schaff/Getty Images

What happens if the president of the United States becomes too sick to do the job?

It’s a question that’s arisen several times in American history, and may be newly relevant now that President Donald Trump has tested positive for the coronavirus.

It’s entirely possible the president’s case remains as “mild” as the White House currently says it is, and that he recovers quickly. But naturally, when the leader of a global superpower comes down with a deadly virus, it’s worth looking into what the contingency plans are should he take a turn for the worse.

Of course we all know that if the president should die in office, the vice president gets sworn in to replace him. This has happened enough times in American history — eight, the most recent being John F. Kennedy’s assassination in 1963 — that it’s clear how that happens.

These situations are where the 25th Amendment to the Constitution comes into play.

The 25th Amendment created, for the first time, a process by which the president of the United States can temporarily give up his powers — or have them taken from him — because he is deemed “unable” to do the job.

During the Trump presidency, the 25th Amendment has come up surprisingly often, because commentators and even some of Trump’s advisers have discussed invoking it to strip him of his presidential powers against his will, due to concerns about his erratic behavior and general unfitness for office.

That hasn’t happened. But though the amendment was broadly written, these provisions weren’t really aimed at countering presidential erraticism; they were aimed at helping the government do something about debilitating presidential health problems.

Overall, the 25th Amendment provides two paths through which Vice President Mike Pence could be made “acting president.” If either of them is invoked, Pence would get the full powers of the presidency — but Trump would be able to later get those powers back, should he recover.

Where did the 25th Amendment come from?

The framers of the Constitution were farsighted about many things, but presidential succession was not among them. The text was vague on several matters, including on whether the vice president fully becomes president if the sitting president dies or resigns (in practice, the answer was interpreted as “yes”), and on how to fill a vice presidential vacancy that arises during a term (in practice, the answer was interpreted as “you can’t”).

Most interestingly for our purposes, the Constitution’s original text states that a president could be removed from office for “inability” but gives zero specifics about how this would actually be determined or carried out. So when President James Garfield was bedridden after being shot and President Woodrow Wilson was debilitated by a stroke, they simply lingered on in the presidency without doing very much for months, because no one knew what else could be done while they were still drawing breath.

These scenarios may not have been so bad in the United States of the 1790s, but by the mid-20th century the country had become a global superpower, and modern communication tools created omnipresent demands for presidential decisions and actions.

The chaos and instability that followed Kennedy’s assassination finally spurred politicians to move toward resolving ambiguities and problems like these. And for once, Congress moved quickly, passing what became the 25th Amendment to the Constitution in 1965 and winning its ratification in the states by 1967.

What does the 25th Amendment say?

Section 1 of the amendment clarifies that, yes, if a president is removed from office through death or resignation, the vice president becomes president. Section 2 creates a process for filling a vice presidential vacancy — through presidential nomination and confirmation by both houses of Congress. (Both of these came in handy very quickly. Vice President Spiro Agnew resigned in 1973, and Gerald Ford was confirmed to replace him. If that hadn’t happened, there would have been no vice president to replace Richard Nixon when he resigned the following year.)

So if Trump were to die in office, Pence would become president. He’d then get to nominate someone else for vice president, subject to confirmation by both the Republican-controlled Senate and, interestingly, the Democratic-controlled House.

The remainder of the amendment deals with the topic of presidential inability — what happens when the president or his colleagues decide he can no longer do the job?

So theoretically, if Trump were to become badly ill, he could invoke Section 3, send a written declaration to Speaker Nancy Pelosi and Sen. Chuck Grassley, and then Pence would become acting president. But Trump would still technically be president. And he could take back his presidential powers any time he wants, booting Pence back down to VP.

Then we have Section 4, which is the really interesting one. It provides a way for a president to be involuntarily stripped of his powers.

The key players here are the vice president and a majority of “the principal officers of the executive departments” (President Reagan’s Justice Department interpreted this to mean the main Cabinet departments, which today number 15). If Pence and at least eight Cabinet secretaries send a written declaration saying the president is “unable” to run the country to the House speaker and Senate president pro tem, then Pence would “immediately” become the acting president.

In what situations might these provisions of the 25th Amendment actually be used?

Section 3 of the 25th Amendment — the one where the president voluntarily and, hopefully temporarily, gives up his powers — has been used before. Reagan invoked it in 1985 when he was anesthetized for colon cancer surgery, making George H.W. Bush acting president for most of one day. And George W. Bush invoked it twice for colonoscopies, in 2002 and 2007, making Dick Cheney briefly acting president.

More recently, New York Times journalist Michael Schmidt reports in a recent book that, when Trump was unexpectedly rushed to Walter Reed hospital in 2019, Pence was told he should be on standby to possibly become acting president. The health issue Trump was dealing with then remains unknown, and Section 3 did not end up being invoked.

Section 4, meanwhile, has never been used. Its text is broad and could apply to a spectrum of circumstances.

The least controversial scenario would be if a president should become indisputably physically debilitated from either injury or ailment, so much so that he couldn’t communicate but remained alive. Then it’s quite obvious to use Section 4 to put the vice president in charge unless and until the president recovers.

But one can also imagine situations in which the president’s physical or mental health is the subject of some dispute. As a 1988 Miller Center report put it:

In retrospect, [Section 4] probably could have applied to the final periods of Woodrow Wilson’s or Franklin D. Roosevelt’s presidencies. This provision involves a sick president who either refuses or is unable to confront his disability. Put another way, this section basically applies to a president who is disabled but unwilling to step aside. He or she may be stubborn, or be in the hands of a powerful staff or of a strong-willed spouse, the latter being Wilson’s case.

Section 4 also came up during Reagan’s second term. Reagan had Alzheimer’s disease in his later years, and some argue he demonstrated early symptoms while he was still in office. At the beginning of 1987, one White House aide even wrote a memo in which he urged White House Chief of Staff Howard Baker to “consider the possibility that section four of the 25th Amendment might be applied.” But this didn’t end up happening — Baker soon decided that Reagan was still in possession of his faculties, and the president remained in office for his full final two years.

Finally, and most recently, this provision has also been discussed in regards to Trump, due to concerns his top advisers held about his mental state and fitness to govern.

For instance, shortly after Trump fired FBI Director James Comey in May 2017, Deputy Attorney General Rod Rosenstein reportedly discussed the possibility of invoking the 25th Amendment to strip Trump of his powers in a private meeting.

“Anonymous,” the Trump administration official who wrote an op-ed for the New York Times and a subsequent book, also claimed the topic came up among officials after Comey’s firing, writing:

The disarray was so severe — and concern about Trump’s temperament so pervasive — that his lieutenants talked about what would happen if the situation got worse. This included comparing notes on a breaking point. What level of instability warranted presidential removal? Was it debilitating cognitive impairment? Was it a reckless order that put the American people in danger? There’s no handbook for these situations.

A back-of-the-envelope “whip count” was conducted of officials who were most concerned about the deteriorating situation. Names of cabinet-level officials were placed on a mental list. These were folks who, in the worst-case scenario, would be amenable to huddling discreetly in order to assess how bad the situation was getting.

However, Anonymous goes on to say that any such talk was “hushed and fleeting,” since Section 4 wasn’t really designed to remove a president who would fight back — because if he did so, things could get very ugly, very fast. Eventually, Trump’s advisers got used to the way things worked now, and talk of invoking the amendment was dropped.

A serious presidential physical illness, however, would be much closer to what the drafters of the 25th Amendment had in mind.