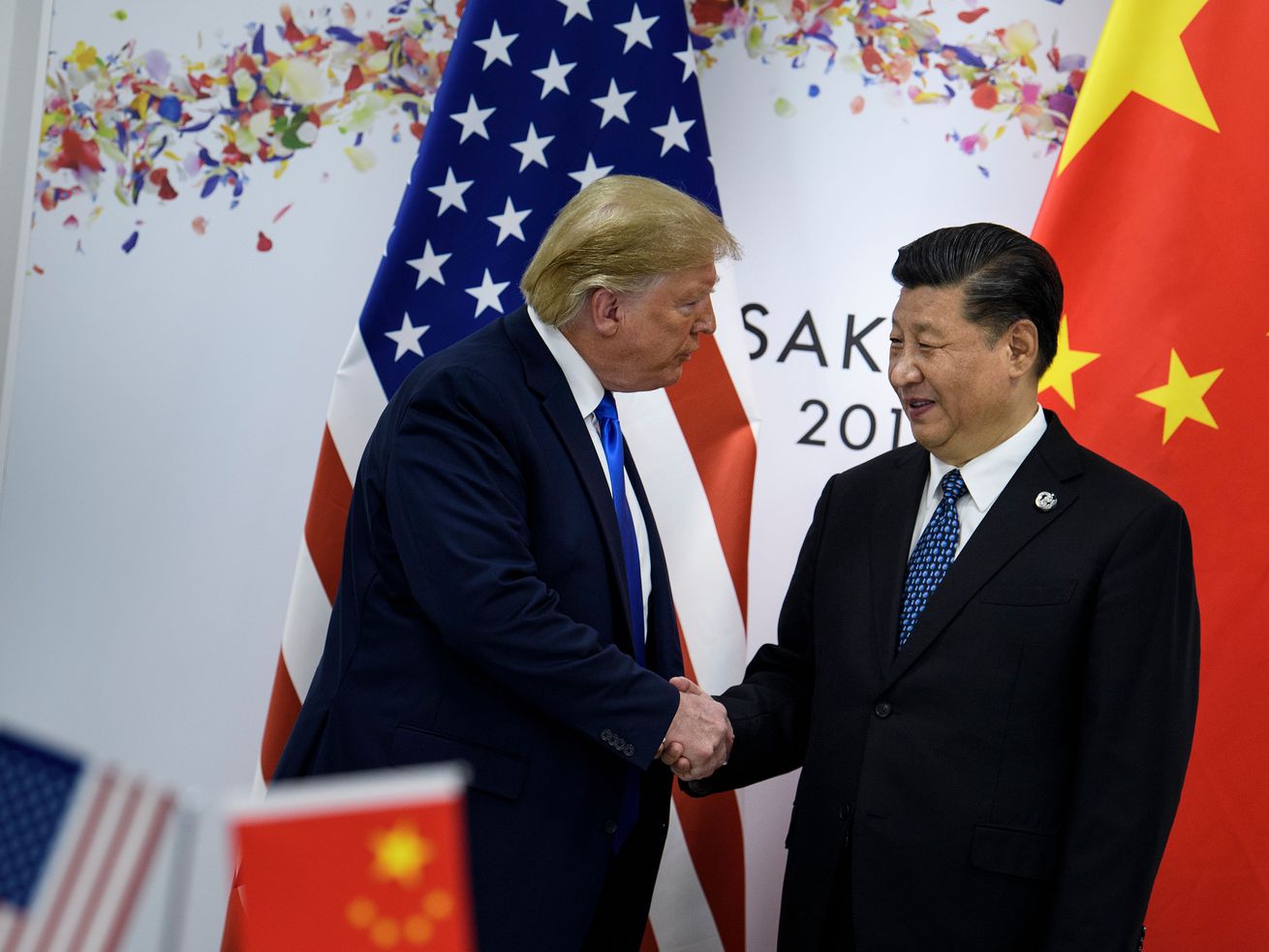 President Trump agreed to withhold new tariffs on Chinese goods in a tentative plan to end the trade war.

President Donald Trump tentatively de-escalated the ongoing trade war with China on Saturday when he announced he will cancel a planned 25 percent tariff on $300 billion worth of Chinese goods.

“We’re holding on tariffs, and they’re going to buy farm product,” Trump told reporters at the G20 summit in Osaka, Japan, where he met with Chinese President Xi Jinping.

Neither Trump nor Xi offered details on which farm products China would buy while talking to reporters, and an earlier 25 percent duty will remain in place on $250 billion worth of Chinese goods.

US farmers have been been squeezed by the trade war; China’s retaliatory tariffs cover a range of farm goods, including soybeans, almonds, pork, and apples. Chinese buyers once accounted for roughly 60 percent of the US’ agricultural exports, but that number has declined since the tariffs began, with Minnesota’s exports to the country dropping about about 25 percent since 2018.

Trump has promised farmers relief before, announcing Mexico would increase its agricultural imports as part of a trade deal. Mexico later said it had not agreed to do so — it remains to be seen whether the bump in Chinese exports will actually come to pass.

In a major concession to China, Trump also said US companies will once again be able to sell technology to Chinese industry giant Huawei.

Xi hoped to make easing restrictions on Huawei a pre-condition for a new trade deal. Since 2018 — when the Trump administration first introduced Chinese tariffs — the US has used a ban on the company as a bargaining chip in negotiations between the two countries as Vox’s Alex Ward reported:

The US has led a global effort to stop allied nations from using technologies made by Huawei, arguing that the Chinese government — which exerts significant control over domestic companies — could use those technologies to spy on citizens of other countries. The US has already banned Huawei from doing any work with the federal government, a major move meant as an example for other countries to follow.

There’s also a financial motivation behind the US push to stop countries from using Huawei products: US and Chinese firms are both vying to lead the world in providing 5G technology, which offers lightning-fast internet connectivity that will allow billions more devices — from cellphones to self-driving cars to even robots performing surgery — to operate better.

Trump also promised further easing of restrictions on Huawei, but was not specific about what this would entail.

In a second concession, the president expressed his desire to reform US visa policy, saying he’d like to investigate ways to grant Chinese students who obtain American diplomas green cards in what he called a “smart person’s waiver.”

Immigration is a key issue for Trump; at a rally in late May, he told supporters “our country is full” and said, “We don’t want people coming here.” He also recently announced — then cancelled — a massive ICE operation that would have targeted roughly 2,000 families.

At the G20 summit, however, the president signaled he sees Chinese immigrants as different than other types of immigrants and asylum seekers, telling the press, “We want to keep them here.”

The trade war has hurt all sides

Over the year the Trump administration has escalated its trade war with China, American farm exports to China have gone from $26 billion (under President Obama) to $6 billion this year. China has met every duty on its goods with tariffs of their own, including a 25 percent tariff on 5,000 goods in June.

Although both Democrats and Republicans believe China has taken advantage of the US economy, critics say that Trump’s scorched earth strategy does more harm than good. The resulting trade war has not only hurt Chinese and American consumers but could also stunt the global economy, as Ward reported:

Trump’s misguided views about how tariffs work are also likely playing a big role in the administration’s hardline approach. Trump insists that tariffs force China to pay money to the US Treasury — which just isn’t true. When a tariff is placed on a Chinese good, it is the company importing that product or a consumer buying it who pays a higher price — not China. In other words, these tariffs are effectively a tax on Americans.

But for whatever reason, Trump continues to proclaim that tariffs are “paid to the United States by China” and that they result in “billions” of dollars pouring into the US Treasury.

And experts worry that his misguided strategic and personal views on tariffs may end up seriously damaging the world economy. “Trump is dragging a dangerous misconception into a critical moment in his standoff with the Chinese,” Chad Bown, a trade expert at the Peterson Institute for International Economics in Washington, said last week. “And American businesses and consumers stand to pay the price.”

Negotiations to end the trade war between the US and China reached a dead end last May after Trump said China “broke the deal.” In Osaka, Trump proclaimed: “We’re right back on track.”

Both China and the US have incentive to make a deal; for instance, China wants to continue to grow firms like Huawei (which pulled in $27 billion in revenue in the first quarter of this year despite its use as a trade war pawn) and US companies and farmers want to again reap the benefits of their former relationships with buyers in the country.

However, there is no timeline for the next round of negotiation’s conclusion, and major impediments to progress, including differing views on intellectual property protections and technology sharing. And despite making plans to resume talks, even President Trump remained cautious.

“This doesn’t mean there will be a deal,” Trump said. “They would like to make a deal. I can tell you that. If we can make a deal it would be historic.”