BRITAIN will be hotter than HAWAII this weekend according to Met Office forecasters and the temperature could smash the previous June record of 35.6C.

A “tongue of fire” – the 1,500-mile wide heatwave scorching Europe – has already seen France endure its hottest day ever at 45.8C, as it inches closer to the UK. 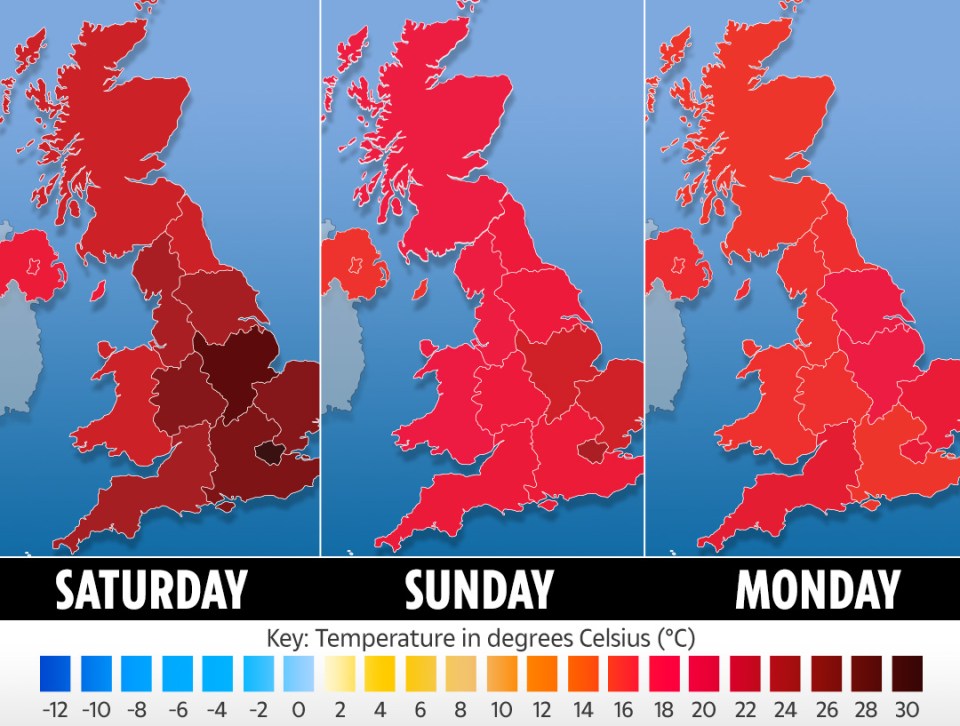 It could be the hottest June day for 178 years, which is when the Met Office records began in 1841.

Hawaii is expected to reach 29C tomorrow as forecasters believe the East of England between London and Lincolnshire will comfortably go above 30C.

In Europe, three beach goers died this week on French shores when the swimmers reportedly collapsed after taking to the sea to try to cool down.

Glastonbury Festival-goers basked in the sunshine as temperatures pushed its past Friday record of 31.2C – which was set in 2017.

Met Office forecaster Nicola Maxey said: “There’s a 50 per cent chance of Saturday seeing over the 35.6C June record, most likely between London and Lincolnshire.

“Even York could see 32C. Friday had Glastonbury close to its 31.2C record.

“There’s remarkable heat across many parts of Europe, with highs in the 40s and records being broken.

“Saturday in the UK will be hot and sunny with very high UV, so take precautions, drink plenty of water and stay in the shade if you can.

“It’s cooler on Sunday in Atlantic air, with 26C highs.”

Brian Gaze, the Weather Outlook forecaster, said: “A tongue of fire is extending from the continent to Britain, with highs up to 35C possible on ‘Scorching Saturday,’ after a ‘Frazzled Friday’ for many.”

Daytrippers have been warned of potential traffic jams on coastal routes, including the A23 to Brighton, A31 to Dorset, A30 to Cornwall and M55 to Blackpool.


This ordinary terraced house has incredible secret hidden behind it

Brits are predicted to quench their thirst this weekend as 2.5million cans and bottles of beer, and 2million bottles of wine are expected to be bought from Tesco.