A THREE-day cold snap is about to hit the UK, bringing with it four inches of snow and wind gusts of up to 75mph.

The Met Office has issued weather warnings for wind, snow, rain and ice every day until Monday, although forecasters say conditions are not yet severe enough to be classified as a storm.

Parts of England will be covered in a blanket of snow over the weekend.

Cumbria, Liverpool and even parts of Manchester are expecting to see a couple of inches fall.

Temperatures are likely to drop to -1C in North Western areas of England on Sunday.

But the big chill will Scotland the hardest, where lows of -2C are predicted in northern regions.

It comes after torrential rain and gales sparked devastating floods earlier this month with Storm Ciara and Storm Dennis.

Britain’s next storm, the fifth of the season set to be named Storm Ellen, will likely be announced when the Met Office releases an amber wind warning.

On Sunday, there is a further yellow rain warning for South Wales.

Despite holding off on naming this weekend’s wild weather a storm, the Met Office has warned the country to batten down its hatches again as heavy rain and gales are predicted continue until late Saturday evening.

A deep low pressure is then expected to sweep in on Monday, opening the floodgates to freezing winds from the Arctic. 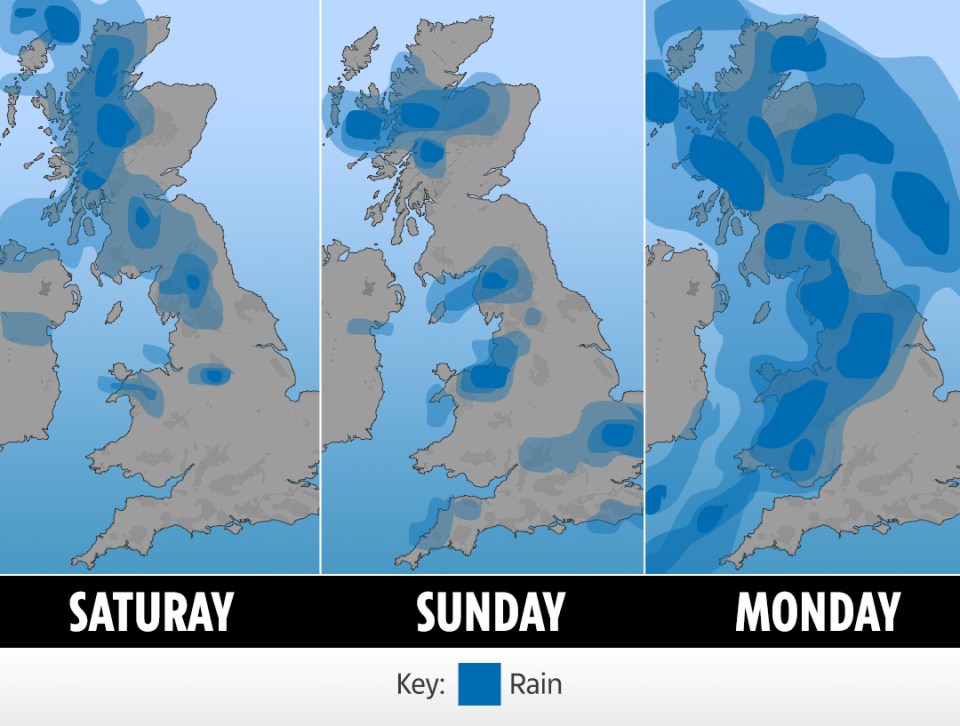 While on Monday, an anticipated low-pressure system passing to the north of Scotland has triggered further yellow warnings for wind for parts of northern and western Scotland and Northern Ireland and Yellow rainfall warnings for northern England.

The Met Office say the strongest gales are expected to be felt across Northern England, Scotland and Wales on Saturday – with weather warnings issued from 6.00am Saturday until 10.00pm.

Scotland will face the brunt of the storm, with gusts of up to 75mph expected on Saturday.

Winds of up to 70mps are could continue battering western Scotland on Monday, forecasters say.

The winds will then travel through to hit the English Channel on Sunday.

How to save £268 on your energy bills (Sponsored)

Why is it important to switch suppliers regularly?

Switchcraft lets you know every time you can save money by switching.

The £5 will be paid into your bank account within 120 days of completing the switch. *Prepayment meter customers will receive a £5 Amazon voucher. Open to those 18 and over. UK residents only. Click here for full T&Cs. News Group Newspapers Limited has a brand partnership with Switchcraft.

Gale force winds and freezing temperatures are bringing with it snowfall to parts of the UK.

A snow and ice warning has been issued for Scotland until 9.00pm Saturday, unleashing strong winds, heavy rain and snow in the north.

WXCharts are expecting 31cm of snow in Scotland by Sunday, however the Met Office are recording an estimated much lower 10cm to fall.

The Environment Agency has warned heavy rain over the weekend could bring further flooding misery to the country.

Almost continuous wet weather for the past fortnight has seen England receive 141% of its average February rainfall so far, the agency said as it warned the deluges are set to continue into next week.

Spells of heavy rain over the weekend could lead to further flooding in parts of the North and the Midlands.

On Friday afternoon, the EA said there were two severe flood warnings, meaning there is an immediate risk to life; 72 flood warnings and 140 flood alerts across England.

There were also one flood warning and three flood alerts in Wales.

The wild weekend weather is linked to a deep low pressure which will hit on Monday, in what will be a very wet and windy start to the week.

The temperatures will continue to drop on Tuesday, as the UK enters a north-westerly air stream which will bring Polar maritime air into the country.

Tiny flat sells for £1… but it has no door, stairs or way to get in it

He said: “Models indicating a deep low tracking northeast close to or perhaps over northern Scotland, bringing a spell heavy rain proceeded by hill snow and gales or severe gales across the north.

“Could be the next named storm on the list – which is Storm Ellen.”

While the Met Office says at this stage they don’t believe Monday’s low pressure system will have the impact required to develop into the fifth named storm of the season, Storm Ellen, they do advise the public to stay alert and up to dates with weather warnings as the conditions continue to develop.