BRITAIN is set to be lashed with 50mph winds and torrential rain before this weekend’s bank holiday heatwave.

The Met Office has issued a yellow weather warning for wind for Devon, Cornwall and Wales. 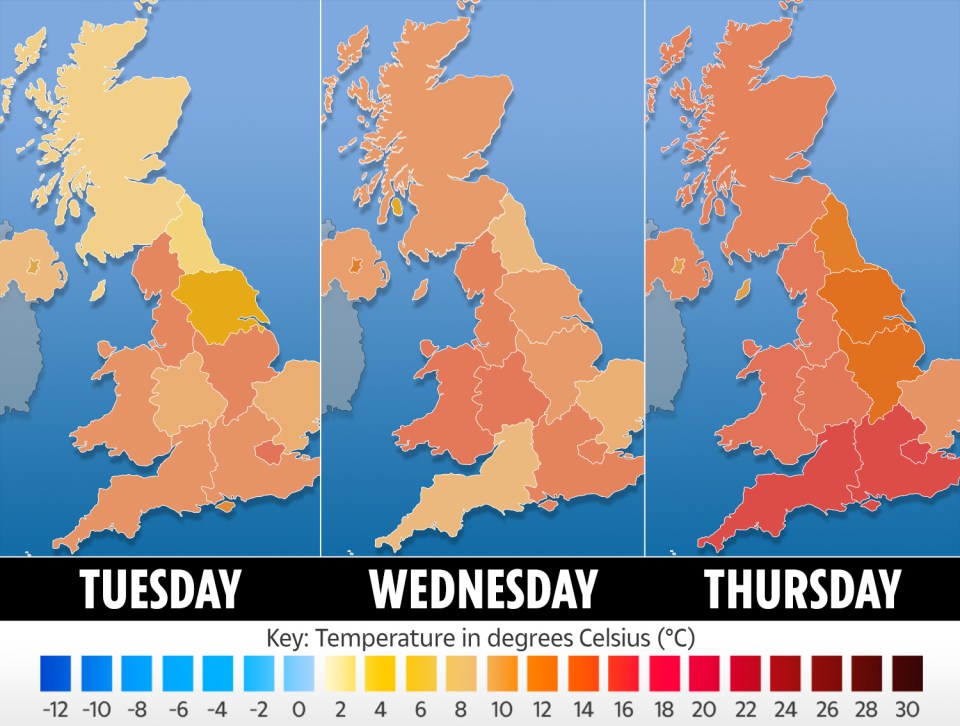 It is in place from 9pm today until 10am on Tuesday morning.

The Met Office has said: “Strong easterly winds will develop across southwest England and parts of Wales during Monday evening and overnight before gradually easing through Tuesday morning.

“Winds will gust to around 50 mph at times, especially over and to the lee of high ground.

“The strongest winds are expected to the west of Dartmoor and across parts of west Cornwall where gusts of 55-60 mph are likely which may lead to some disruption.”

Areas of low and high pressure will battle it out in the early part of this week bringing some intense showers but most places will be bright and sunny as the week progresses.

Temperatures are expected to climb throughout the week from around 18-19C to a high of 25-26C on Saturday.

This is well above the average for this time of year of 18C for May.

A Met Office spokesperson told The Sun Online: “During the week temperatures will steadily rise to a top temperature of around 25-26C in London and the South East.”

Overnight though there could be some intense showers as the areas of low and high pressure collide with the South West being the worst affected with heavy rain, some thunder and strong winds.

The high pressure is due to start kicking in on Tuesday with temperatures of around 15C but the mercury will steadily climb with most parts enjoy some fine weather.

Wednesday likely see top temperatures of around 20C in London and the South East.

most read in uk news

By Friday, some parts of the South will enjoy temperatures of 24C.

Saturday is expected to be the warmest day this week although some showers will start to build up.

The balmy weather is likely to come to a halt on Sunday though and the early part of next week where temperatures will be much cooler, especially in the north as temperatures fall to around 12-13C.