HAVING been ordered to put more black people in ads, the world’s corporations responded well and now the commercial breaks are full of black and white people eating yoghurts together and taking their people carriers for a spin round Scotland.

But we live in confusing times, because now researchers are saying ad men have overshot the mark.

I’m not making this up. They say that 37 per cent of ads feature black people, even though they make up only three per cent of the population as a whole.

Haven’t these researchers got better things to be doing with their time?

To make matters worse, they have been interviewing black people and nearly three quarters of them say they are not represented enough in commercials.

Meanwhile, white people say they are represented too much.

I’m sorry, but am I going mad?

When I watch commercials, I don’t think: “Right. I’m only going to buy stuff that is advertised by fat, middle-aged white men with four chins.”

I never avoided the Halifax because it was promoted by Howard, and I’ve never refused a Flake because I’m not a pretty girl in a cornfield.

But it seems I’m unusual.

There are even complaints that lesbian, gay and transgender people are barely represented at all.

It seems to me that there’s only one solution. Bring back the days of great adverts

But how do you know if someone is gay?

Are they supposed to prance about like Larry Grayson did, because I thought we were past all that?

Do you want me to put the television on pause and look for an Adam’s apple?

Of course, it might be possible to make an ad featuring every single minority. Coca-Cola actually did that back in 1971, when they filled a hillside with a multi-racial smorgasbord and got them to sing in harmony about harmony.

But what if there’s only one character in the commercial? If this research is to be believed, he, or she, or it, is bound to offend someone.

It seems to me that there’s only one solution. Bring back the days of great adverts.

Forget the “£9.99. Sale Must End Friday” nonsense and go back to the days when nothing in life was as reliable as a Volkswagen and men surfed through waves of white horses.

Let’s once again have the comb-over Hamlet man and the German soldier catching the bouncing bombs.

Because if you make us laugh and make us amazed in the commercial breaks, two things will happen.

We won’t reach for the fast-forward button on the remote control and we won’t notice the ethnicity or the sexuality of the people starring in them.

I WOULD agree with absolutely everyone else that Chernobyl, the box set currently showing on Sky, is the best drama screened in this country for a very long time.

The cast is faultless, the pacing is delicious and the writing was plainly done by someone who agonised for years over every single word.

Mind you, the best bit is the story itself. Which is true. The idiot party members from shoe factories who were put in charge of nuclear safety.

The stupidity of letting the state run something as complex as an atomic power station. It was like British Leyland with Geiger counters.

And it was terrifying. Because it showed us all what life will be like in this country should Corbyn and his merry band of socialists ever get the keys to No10.

Running for your vote 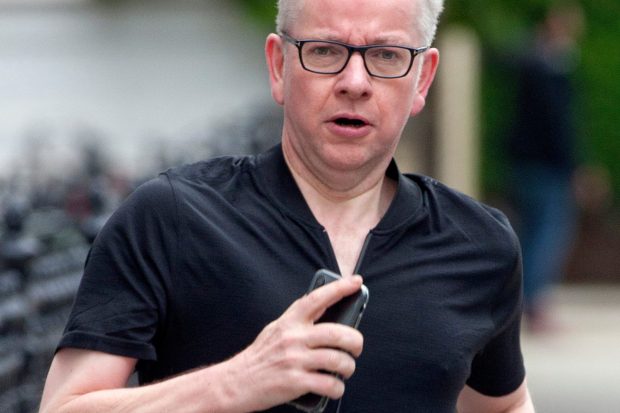 YOU can always tell when an election is nearby because politicians come out of their houses every 15 minutes and go for a run.

I’m not sure why they think we will be impressed by this, because I’m not.
As I’ve said before, running is something you should only do when you are being chased by a bear.

YOUNG people have been answering the call of duty for centuries.

We were reminded this week by the D-Day celebrations that they were still doing it as recently as 1944. But would they do it now? I’m not so sure they would.

EVERYONE seems to nod and make agreement noises when they’re told that, by 2035, all new cars sold in Britain will be electrical.

“Yes”, they all say, “this will make the air cleaner and that will be better for children and old people and newts”.

There is a small problem, though. Electrical cars need cobalt, and most of that comes from Chinese-owned mines in the Democratic Republic of Congo.

Which is just about the most dangerous country on Earth.

THIS week, the very young daughter of American rapper Young Thug was shown in a video clip driving a car.

Campaigners for road safety immediately began to run around like they were on fire, saying that no six-year-old should ever be allowed to take control of a car.

A couple of things on that. She obviously wasn’t driving. She was sitting on the driver’s knee doing the steering.

And I’m sorry, but I did that on my dad’s knee as soon as he was sure I was old enough not to s**t on him.

EARLIER this week, Jeremy Corbyn took to the stage to address a crowd of people who’d gathered to moan about Donald Trump.

Corbyn – dressed, as usual, like a naturist who’s been forced by a court order to wear clothes – talked about the need for “inclusivity”.

He was glad that London had a Muslim mayor and wanted to see everyone, from every minority, be they disabled, lesbian, gay, bisexual or transgender, treated equally.

He went on to say he wanted to end Islamophobia and, with his tongue in his whiskery cheek, anti-Semitism as well.

Whipped into a frenzy by the old commie’s rousing rhetoric, the crowd went berserk.

And then they turned on a middle-aged white man and threw a milkshake at him.

MUCH as I like Anthony Joshua, I was delighted to see he’d been beaten by Andy Ruiz Jr. Because Andy gives the fat men of the world hope. He should enter Wimbledon next.

most read in opinion

‘YOU DON’T REPRESENT US’


England fan attacked by Tommy Robinson speaks out after punch

BACK in the early Seventies, when Jenny Agutter was famous for rarely taking a film role that required her to keep her clothes on, she taught me that my young body was capable of many things I hadn’t noticed before.

And now, well into her sixties, she’s capable of reminding my very old body that it’s capable of things I thought it couldn’t do any more.