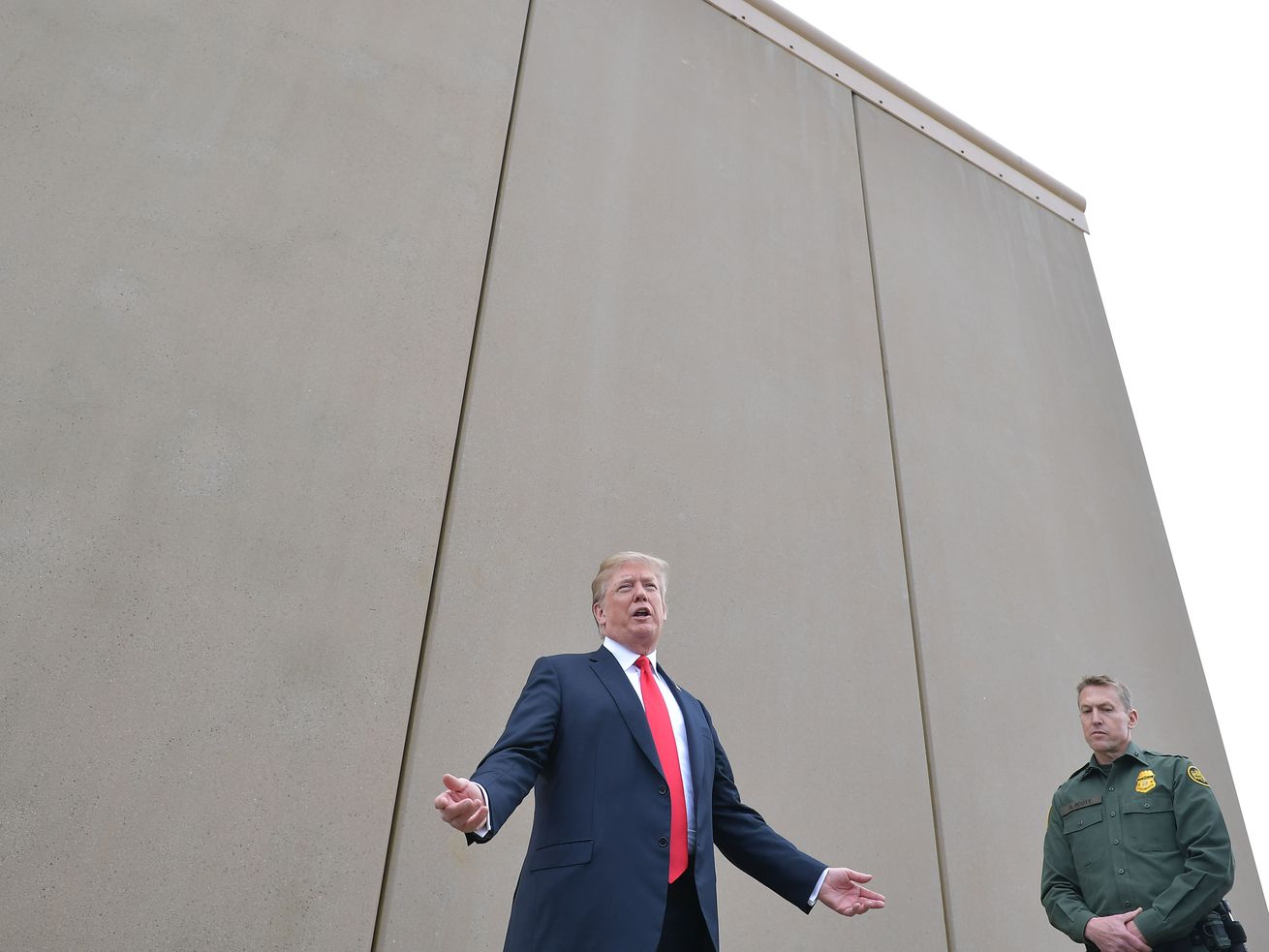 Trump claims his wall will stop the flow of heroin and other illegal drugs from Mexico. He’s wrong.

President Donald Trump reiterated on Tuesday that he won’t let the federal government reopen until he gets more than $5 billion to build his wall at the US-Mexico border. And one of the reasons for this demand, Trump said in a speech at the Oval Office, was that the wall would help combat America’s opioid epidemic.

“Our southern border is a pipeline for vast quantities of illegal drugs, including meth, heroin, cocaine, and fentanyl,” Trump said. “Every week, 300 of our citizens are killed by heroin alone, 90 percent of which floods across from our southern border. More Americans will die from drugs this year than were killed in the entire Vietnam War.”

Trump’s statistics here are generally correct. But according to experts, he’s wrong that the wall would do much to stop the flow of illegal drugs. That’s because the wall would face a big foe when it comes to drugs, one that has consistently defeated greater border security over the years: cars.

It’s a scene out of TV shows like Breaking Bad and Better Call Saul: A truck transporting legal goods (like ice cream) goes through the US border, sneaking illicit drugs through security inspections by simply hiding them — whether among the other products, in a secret compartment, or some other tricky spot.

Scenarios like this aren’t just the stuff of fiction; drug trafficking through a legal port of entry is how most illegal drugs make it into the US. And this kind of smuggling will be totally unaffected by a wall put in place to block illegal border crossings, showing that even the toughest border security measures may be next to worthless for dealing with illegal drugs.

To the extent that drugs do come through the areas a wall would cover, border security and drug policy experts say the wall will have little to no effect. That’s in part because traffickers are really good at figuring ways around obstacles — whether it’s launching drugs over the wall, carrying them under the wall, or sailing around it. But it’s also because if a wall did end up a big barrier, traffickers would probably just shift their operations to find other ways into the US.

All of that is to say that while Trump’s wall may be many things, there’s wide agreement among experts and in the empirical research that it won’t do much, if anything, to halt illegal drug trafficking. Drug trafficking organizations just have too much of a financial incentive — from the hundreds of billions they make in the illegal drug trade — to let a wall stand in their way, so they’ll come up with solutions, from ice cream trucks to submarines, to overcome any barriers to those profits.

Most drugs come through legal ports of entry

Among experts, there’s a consensus: Tougher border security measures, like a wall, don’t have much of an effect on drug trafficking. A 2013 report by journalist Reed Karaim summarized the general view, following years of border security buildups:

Most border security analysts say there is little evidence the buildup has significantly reduced the availability of illegal narcotics in the United States. The U.S. Drug Enforcement Administration (DEA) has cited reduced use of some drugs, especially cocaine, as proof the buildup is working. But other drugs have grown in popularity, and smugglers have proved adept at shifting their methods and locations in response to interdiction efforts.

It’s hard, given the nature of the black market, to draw up any hard numbers showing this, but the best data we have comes from the federal government. As the DEA concluded in 2015, drug traffickers “transport the bulk of their goods over the Southwest Border through ports of entry (POEs) using passenger vehicles or tractor trailers.” Wilson further clarified that while marijuana is often trafficked in the areas between official crossing points (which a wall would cover), harder drugs like cocaine, meth, and heroin mostly come to the US through the legal ports of entry.

“If the goal of border security policy is to cut into drug trafficking, the investments would be better made at the ports of entry,” Wilson said. Indeed, some of that work has happened in the past few years — with more personnel, drug-sniffing dogs, X-rays, better electronic records, and other technologies that can help catch drug traffickers.

But even if the US does significantly increase security at legal ports of entry, it simply can’t catch all the drugs going through the border — at least without significantly damaging the economy by slowing down a massive point of trade between two neighboring allies.

“It’s a needle-in-a-haystack kind of a problem,” Wilson said. “The vast majority of crossings at ports of entry are people going about their day-to-day business [and] doing things that are totally legal and legitimate, whether going to work or school or shopping or trucking goods back and forth across the US-Mexico border.”

This is exactly why many drug traffickers resort to legal ports of entry: When there’s so much legal traffic to hide within, it’s safer and more reliable to go through a legal port of entry than to try a perilous journey through a desert or river patrolled by guards.

Some drugs do, however, make it through the areas between legal ports of entry. Could a wall stop those drugs from flowing into the US?

Experts, again, generally argue that it would not. What tighter border security, like a wall, by and large changes is how traffickers get drugs into the US rather than whether they do.

A wall, then, might get traffickers to rely more on legal ports of entry. Others may develop new tactics and tools to get around tougher border security measures. But it won’t get them to stop trafficking altogether.

“An increase in border security could lead to greater use of technology,” Wilson said, “whether that’s a catapult, ultralight, or tunnel technology.”

This isn’t hypothetical. Over the past several decades, drug traffickers have come up with all sorts of ingenious ways to bypass border security. Here are a few examples, which, while not all very common, show the ridiculous lengths criminals are willing to go to get drugs in the US:

Some of these methods can sound downright ridiculous. But they show that traffickers are very good at coming up with all sorts of ways to get around security.

In this way, the war on drugs has made traffickers even better at what they do. As Sanho Tree, a fellow at the Institute for Policy Studies who focuses on the war on drugs, told me, “So we go after shrimp boats and fishing boats [used to smuggle drugs] and stop those, and they respond with cigarette boats. We respond with faster boats and helicopters to take out those boats, and then they switch to submersibles. And then we get better at detecting those with spotting towers now, and they go the fully submersible route. And if we do catch those, there are ‘narco-torpedoes’ now; these can be bolted under the hull of a ship with release cables and homing devices.”

But to the extent that that’s true, the arms race doesn’t seem to have had much of an impact on drug prices even as the US has escalated its war on drugs: Since the 1980s, the price of heroin has plummeted by nearly 86 percent, according to federal data. As Trump has acknowledged, a dose of heroin can now cost less than a candy bar.

Still, it’s safe to assume that these measures make illicit drugs more expensive than they otherwise would be.

Even that, however, can create problems through what’s known as the “profit paradox”: While a drug’s prohibition and interdiction make it more expensive, the higher price also makes drugs more lucrative to criminal groups. It’s one reason drugs that cost literally pennies can turn into a hundred- or thousand-dollar commodity. Those massive profits give drug traffickers more reason to seek out ways, including some expensive methods, to continue trafficking drugs in the face of international and governmental resistance. So the cycle continues.

Even if a wall does slow drug trafficking from Mexico, the drugs will flow from somewhere else

Imagine, however, that the US manages to make drug smuggling through the Mexico border so difficult that traffickers eventually decide it’s not worth it anymore.

If that were to happen, chances are criminal groups wouldn’t just quit the business for good. They would likely shift their operations and trafficking routes to other parts of the world.

It’s what’s called the “balloon effect”: As one part of a balloon is pushed down, the air is simply shifted to other parts of the balloon. This could happen should tough border security measures make the US-Mexico border too much of a hurdle for traffickers.

“Enforcement along the US-Mexico border could, potentially, push things back to the Caribbean or to some other routes, whether it pushes people to smuggle more drugs on flights into the United States [or] open a new route in the Pacific,” Wilson said. “We don’t know, but one of the things we’ve seen over time is that there’s been a balloon effect.”

All of this shows why focusing so much on the law enforcement and interdiction side of the war on drugs just doesn’t work — and didn’t prevent the opioid epidemic, the worst drug overdose crisis in US history. That’s why Wilson and other experts are calling on the US to put more toward reducing demand for drugs — with prevention and addiction treatment programs — instead of focusing so much on supply.

“That doesn’t mean that interdiction can’t play a role in a more comprehensive, better strategy,” Wilson said. “It just means that what we’ve done so far is not enough.”

As nice as Trump’s wall might sound to him and his supporters, then, it’s just not the right answer to America’s massive drug crisis.