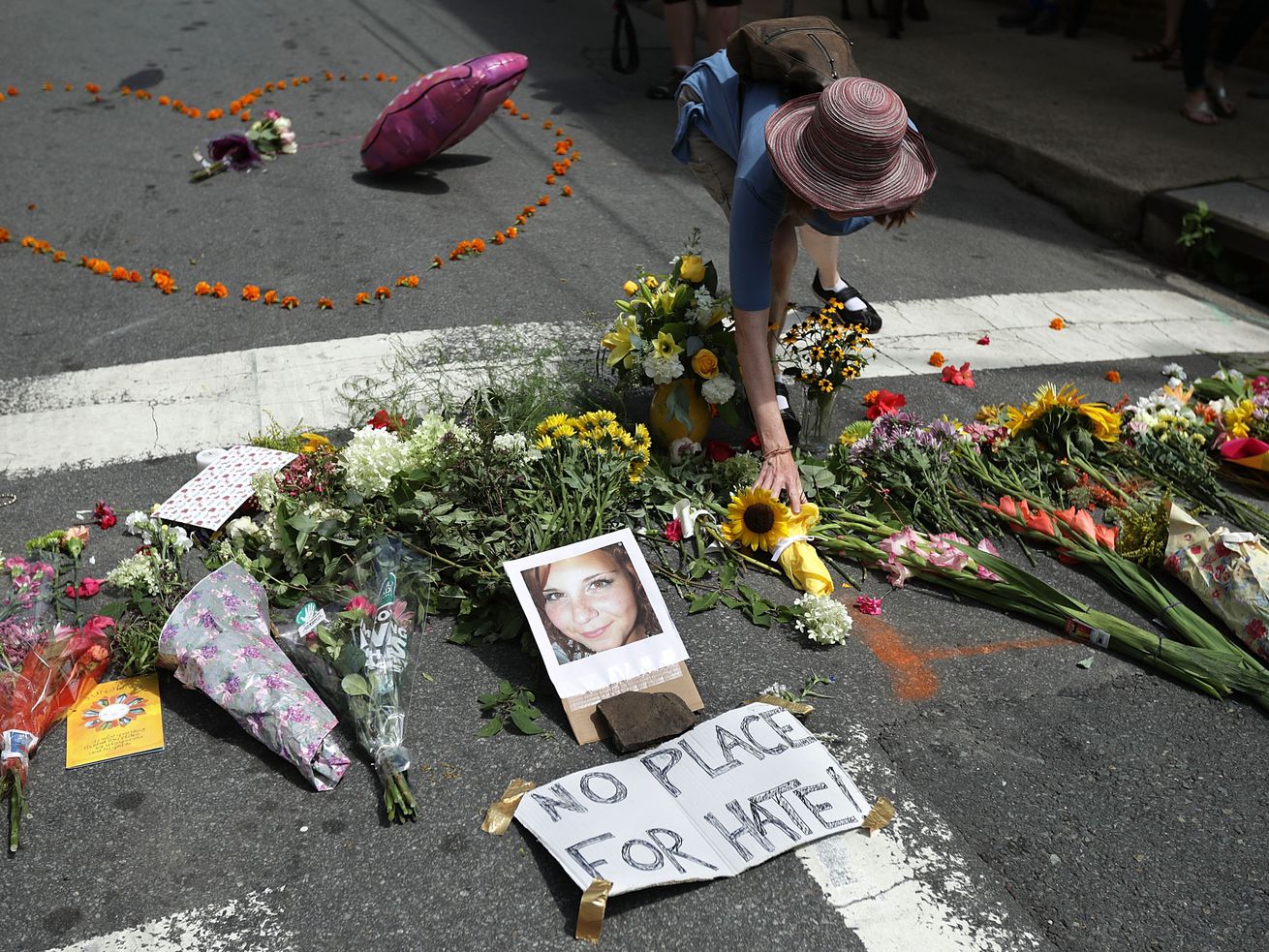 The 2017 “Unite the Right” rally was organized by and intended for white supremacists and white nationalists.

President Donald Trump is still defending his infamous remarks in the wake of the Unite the Right rally in Charlottesville, Virginia, in 2017, when he said, “You also had some very fine people on both sides.”

Trump defended his response to the violence in Charlottesville in 2017 when he said there were “very fine people on both sides.”

He said the was talking about people who “felt very strongly about the monument to Robert E. Lee. A great general, whether you like it or not.” pic.twitter.com/fulPWpY4zC

Trump isn’t alone in attempting to recast his “both sides” Charlottesville remarks; his supporters are, too. Within the past few months, Dilbert creator Scott Adams, Morton Klein, head of Zionists of America, and writers for Breitbart and the Federalist have done the same, as the Daily Beast’s Will Sommer reported a few weeks ago.

These writers argue that Trump’s “very fine people on both sides” comments were meant to refer to the protesters in attendance who were attempting to stop the removal of a statue of Confederate Gen. Robert E. Lee from a public square in Charlottesville, not the neo-Nazis and white nationalists who made up the bulk of the event’s attendees.

But here’s the thing: He did.

Unite the Right was explicitly organized and branded as a far-right, racist, and white supremacist event by far-right racist white supremacists. This was clear for months before the march actually occurred. So by casting the rally instead as a sort of spontaneous outpouring from Confederate statue enthusiasts, Trump is rewriting history.

What Trump should have known about Unite the Right

The Unite the Right rally, which was scheduled to take place on August 12, 2017, was the most visible display of white nationalist and white supremacist hate en masse in the United States in years. And it was branded as such long before it took place.

The Unite the Right rally was the third such event in Charlottesville in 2017 — and each of these rallies was led and supported by self-proclaimed white nationalists and racists, apparently invigorated by an April 2017 decision by the Charlottesville City Council to remove a statue of Robert E. Lee from Lee Park.

At the time, Confederate statues and monuments across the country were under increased scrutiny, especially following the murder of nine black churchgoers in Charleston, South Carolina, by an avowed racist who enjoyed Confederate symbology.

In May 2017, white nationalist Richard Spencer led a rally and torchlit parade through Lee Park, where attendees chanted “You will not replace us” and “Blood and soil.” In response, the chair of the Charlottesville Republican Party released a statement saying, “Whoever these people were, the intolerance and hatred they seek to promote is utterly disgusting and disturbing beyond words.”

In July 2017, members of Loyal White Knights of the Ku Klux Klan also protested against the removal of the Lee statue in Charlottesville, with one member telling USA Today that he was protesting the “cultural genocide” of white people he believed was behind the call for the statue’s removal.

So by August 2017, when the Unite the Right rally was scheduled to take place, it was fairly clear that the organizers behind the rallies on behalf of keeping the Lee statue in place had a very specific ideological bent. That was clear in a police affidavit detailing who was expected at Unite the Right — including roughly 250 to 500 Klansmen and more than 150 “Alt-Knights,” the military division of the Proud Boys.

The affiliations of the organizers were also clear. Jason Kessler, a “pro-white” activist, filed the permits for the rally.

On a radio show before the event, Kessler said, “the number one thing is I want to destigmatize Pro-White advocacy. … I want a huge, huge crowd, and that’s what we’re going to have, to come out and support not just the Lee monument but also white people in general, because it is our race which is under attack.”

In fact, going back through the promotional materials for Unite the Right, it is fascinating just how little the statue of Lee, or honoring Confederate veterans, seemed to matter to the organizers and attendees of Unite the Right, an event that, despite its name, had nothing to do with conservatism writ large.

Take, for example, this image created for the rally and approved by both Kessler and Richard Spencer.

The names listed here are of prominent white supremacists and alt-right activists: Spencer, Kessler, Holocaust denier and failed Senate candidate Augustus Invictus, Matthew Heimbach (a white nationalist who headed the Traditional Workers Party), and Pax Dickinson, formerly the chief technology officer for Business Insider before he was forced out over misogynistic tweets and became a “neoreactionary.”

Just so we’re extremely clear, here is a video of some of Heimbach’s supporters at a neo-Nazi rally in Pikesville, Kentucky, held after Unite the Right. The man in the foreground giving a fascist salute is wearing a shirt emblazoned with the acronym “RAHOWA,” which means, in white supremacist parlance, “racial holy war.”

Other white nationalists were later added to the program — including Mike “Enoch” Peinovich, an American neo-Nazi and founder of the neo-Nazi podcast The Daily Shoah (an insulting reference to the Holocaust), internet figure and noted anti-Semite Baked Alaska, fellow anti-Semite and Daily Shoah contributor Johnny Monoxide, neo-Nazi Christopher Cantwell, and Michael Hill, co-founder of the League of the South and a slavery proponent who lambasted “organized Jewry” on his group’s Facebook page.

The attendees of Unite the Right were crystal clear as to what the event was supposed to be — not a show of support for history, but a “pro-white” activist event. Neo-Nazi Andrew Anglin described the upcoming Unite the Right rally as in a post on the neo-Nazi website the Daily Stormer on August 8, 2017:

Although the rally was initially planned in support of the Lee Monument, which the Jew Mayor and his Negroid Deputy have marked for destruction, it has become something much bigger than that. It is now an historic rally, which will serve as a rallying point and battle cry for the rising Alt-Right movement.

His post also includes the 14 Words — a phrase coined by a white supremacist who killed a Jewish radio host in 1984.

The Daily Stormer created a poster touting its involvement in the event.

None of this was very subtle.

In Discord chats and discussions revealed by legal proceedings that have taken place since Unite the Right, attendees and organizers stated again and again what the point of the event was: “If you want to defend the South and Western civilization from the Jew and his dark-skinned allies, be at Charlottesville on 12 August.”

On August 15, 2017, Trump made his third statement on the events of Charlottesville. (On August 12, Trump said, “We condemn in the strongest possible terms this egregious display of hatred, bigotry and violence on many sides, on many sides.” National Review called his remarks “vague and equivocal,” while Anglin hailed them.)

You can watch his August 15 remarks below or read them here.

Those wishing to defend Trump on this issue have focused on this part of his remarks:

Racism is evil, and those who cause violence in its name are criminals and thugs, including the KKK, neo-Nazis, white supremacists, and other hate groups that are repugnant to everything we hold dear as Americans.

His supporters have taken that as the totality of his comments on Charlottesville. As Morton Klein said during a House Judiciary Committee hearing earlier this month, “In that statement, he condemned neo-Nazis and white nationalists. He did not mean that they are fine people.”

But Trump said a lot more, which his defenders seem strangely unwilling to reckon with. Here is how Trump described what took place at Unite the Right:

TRUMP: I am not putting anybody on a moral plane, what I’m saying is this: you had a group on one side and a group on the other, and they came at each other with clubs and it was vicious and horrible and it was a horrible thing to watch, but there is another side. There was a group on this side, you can call them the left. You’ve just called them the left, that came violently attacking the other group. So you can say what you want, but that’s the way it is.

REPORTER: You said there was hatred and violence on both sides?

REPORTER: The neo-Nazis started this thing. They showed up in Charlottesville.

And during that same press conference, Trump added this:

No, no. There were people in that rally, and I looked the night before. If you look, they were people protesting very quietly, the taking down the statue of Robert E. Lee. I’m sure in that group there were some bad ones. The following day, it looked like they had some rough, bad people, neo-Nazis, white nationalists, whatever you want to call ’em. But you had a lot of people in that group that were there to innocently protest and very legally protest, because you know, I don’t know if you know, but they had a permit. The other group didn’t have a permit. So I only tell you this: there are two sides to a story. I thought what took place was a horrible moment for our country, a horrible moment. But there are two sides to the country. Does anybody have a final – does anybody have a final question? You have an infrastructure question.

“The night before” is referring to the Friday night torchlit rally of August 11, where more than 200 attendees held tiki torches on the campus of the University of Virginia and chanted “Jews will not replace us” and “Blood and soil.” Whatever this event may have been, it was certainly not “people protesting very quietly.”

They chant: Jews will not replace us. Death to Antifa. White lives matter. #defendcville

In short, Unite the Right was organized not by individuals who, in Trump’s words, “felt very strongly about the monument to Robert E. Lee,” but by ardent white supremacists and white nationalists.

On multiple occasions before Unite the Right, attendees stated that the Confederate memorial that was supposedly their purpose was actually the least of their concerns. We have their statements, their videos, their posters, and their words.

We also have the transcript and video of how Trump responded. He did, indeed, refer to the people who attended Unite the Right, people who were likely well aware of and supportive of its messaging, as “very fine people,” and he downplayed the tiki torch parade as “people protesting very quietly.”

Unite the Right was a horrific event in our nation’s recent history — and to come to terms with it requires doing so in good faith and honesty, something the president and his defenders appear unwilling to do.