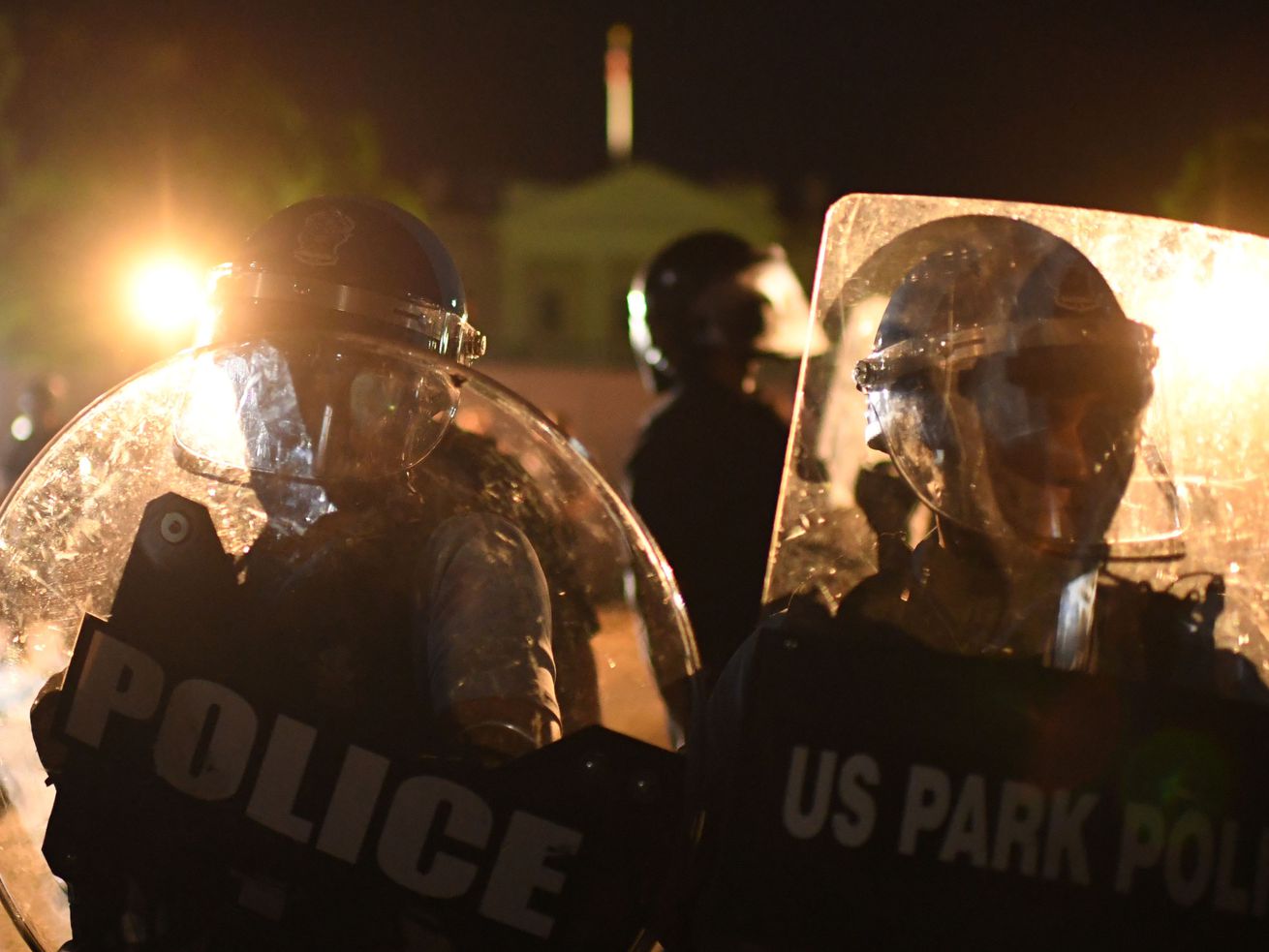 Police officers hold up their shields outside the White House in Washington, DC, early on May 30, 2020, during a demonstration over the death of George Floyd. | Eric Baradat/AFP/Getty Images

The Secret Service and Washington, DC Mayor Muriel Bowser said the city’s police were there.

But based on statements from both the Secret Service and DC Mayor Muriel Bowser, it looks like Trump flatly lied.

Thousands have taken to the streets across the country this week in response to the death of Floyd, a 46-year-old black man who died Monday after a Minneapolis police officer pinned him by the neck with his knee for more than seven minutes.

On Friday, a demonstration took place near the White House, with some protesters trying to remove temporary barriers that had been set up to keep demonstrators far back from the presidential residence, and scuffling with the Secret Service. Agents made six arrests, and no demonstrators even came close to the 13-foot security fence surrounding the White House, let alone to storming the presidential mansion.

The next morning, as part of a Twitter thread mocking demonstrators and praising his security team, Trump accused DC Mayor Muriel Bowser — whom he alleged is “always looking for money & help” — of having refused to allow DC police to assist the Secret Service agents in protecting the White House.

….good practice.” As you saw last night, they were very cool & very professional. Never let it get out of hand. Thank you! On the bad side, the D.C. Mayor, @MurielBowser, who is always looking for money & help, wouldn’t let the D.C. Police get involved. “Not their job.” Nice!

It’d be quite the scandal if that were true, as DC police have often helped secure the president and government officials. And if Trump personally asked for assistance and Bowser told him to shove off, she could be accused of putting her animosity toward the president ahead of her duties.

But the only real scandal here seems to be that Trump is once again playing fast and loose with the truth.

About four hours after the president’s tweet, the Secret Service released a statement describing how it had defended the White House from some “violent” protesters. The statement clearly notes that “The Metropolitan Police Department” — that is, DC police — “and the US Park Police were on the scene.”

While the Secret Service regularly issues public statements, including through its Twitter account, it’s highly unusual for such statements to directly contradict the president.

About an hour after the Secret Service statement came out, Mayor Bowser held a press conference alongside DC Police Chief Peter Newsham in which she addressed Trump’s tweet.

“My police department in Washington, DC, will always protect DC and all who live and visit here. In fact, that’s exactly what we did yesterday and last night,” she said. “No one needed to ask the Metropolitan Police Department to get involved because we were already involved. Our police were doing their jobs from the start.”

It’s worth noting, however, that Bowser didn’t directly deny having had a conversation with Trump.

So it’s Trump’s word against that of both the Secret Service and the mayor of Washington, DC. Based on that alone, it looks like Trump needlessly made another false statement — at a time when clarity from the president is most needed.