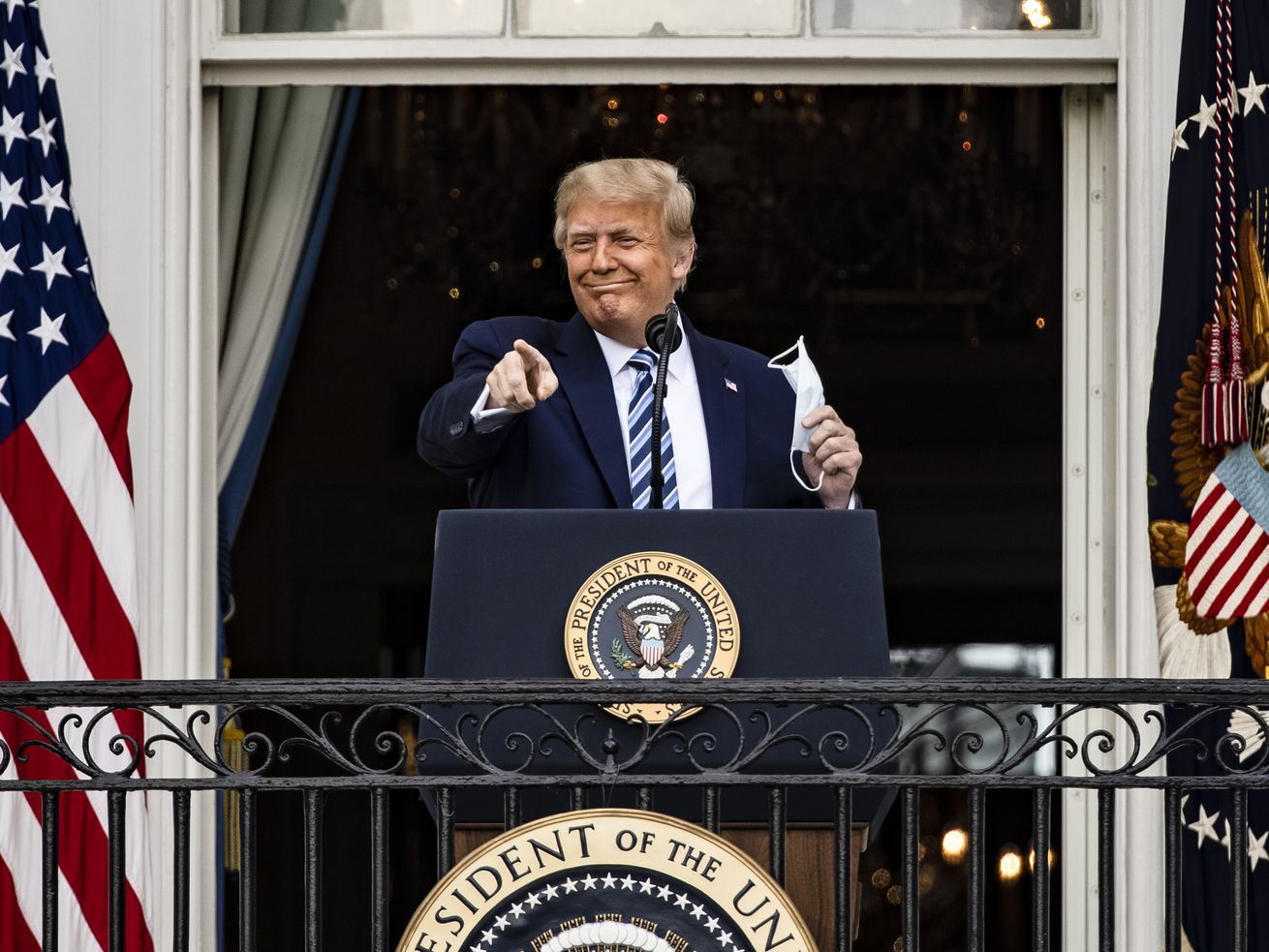 President Donald Trump addresses a rally in support of law enforcement on the South Lawn of the White House on October 10, 2020, in Washington, DC. | Samuel Corum/Getty Images

In a brief 15-minute speech, he touted his support for law enforcement and investment in Black-owned businesses.

President Donald Trump used his first public speech following his hospitalization for Covid-19 to deliver a pitch to Black and Latinx voters. In a speech delivered from a balcony overlooking the White House South Lawn, the president repeatedly touted his support for law enforcement and for investment in Black businesses in a 15-minute speech.

The speech was given Saturday afternoon to approximately 400 supporters affiliated with conservative activist Candace Owens’ Blexit group, which Owens has said is made up of Black Americans who have moved away from the Democratic Party.

While it was labeled an official White House function with no campaign staff involved to avoid violating the Hatch Act — which bans certain political activity by federal employees — the address was very much a campaign speech. The president began his remarks by saying, “We’ve got to vote these people [Democrats] into oblivion.”

Trump begins his first post-coronavirus diagnosis speech by telling his adoring fans at the White House, “we gotta vote these people into oblivion. Into oblivion. Gotta get rid of ’em. So bad for our country.” pic.twitter.com/RtH7O8jYY7

And Trump also claimed that he, not Democratic presidential nominee Joe Biden, has the social and economic concerns of Black Americans at heart.

“You understand that to protect the lives of Black Americans, and all Americans, we must support our police,” Trump said. “Democrats have run nearly every inner city in America, and I mean for 100 years, and their policies have delivered nothing but calamity, poverty, and trouble. Sleepy Joe Biden’s betrayed Black and Latino Americans.”

Beyond these sorts of attacks against his electoral opponent, Trump also touted his “Platinum Plan” for investing in Black-owned businesses. The plan, which was announced in September, would direct up to $40 billion in federal funds into the private sector in hopes of boosting lending to Black-owned businesses.

In trumpeting his achievements, Trump did not mention setbacks Black and Latinx Americans have met in recent months, largely due to his failure to contain the coronavirus. Rather than laying out a plan to boost Black and Latinx unemployment, for instance, which reached pandemic highs at 16.8 and 17.6 percent, respectively — and which have improved at a slower rate than white unemployment — Trump said, “Last year, Black and Hispanic American poverty reached the lowest ever in the history of our country. It’s all building back up so quickly.”

Overall, Trump said, as he often incorrectly does, “The fact is that I’ve done more for the black community than any president since Abraham Lincoln. I say it. Nobody can dispute it.”

Historically, Black voters have broken heavily for Democrats, and that trend is likely to continue again this year. According to a recent Pew Research poll of US adults taken from September 30 to October 5, Biden leads Trump among Black voters by 81 percent, a similar lead to Hillary Clinton’s in 2016. Trump has made some small inroads with Black and Latinx men, though whether those margins are enough to give the president victory in swing states remains to be seen.

The usually verbose Trump kept his remarks brief — to just 15 minutes — which could be a result of his recovery from Covid-19 after being released from Walter Reed Medical Center earlier this week.

While the event was outdoors and supporters were required to wear masks to be admitted to the event, there appeared to be little enforced social distancing, with supporters listening to Trump in close proximity to one another, and repeatedly shouting and cheering — activities known to increase the risk of virus spread.

Trump has refused to say if he’s had a negative Covid-19 test since his initial diagnosis, and was far more than 6 feet away from the crowd. He was cleared to participate in public events beginning on Saturday by White House physician Dr. Sean Conley, who worked to assuage concerns Trump may still be infectious on Thursday.

“Saturday will be day 10 since Thursday’s diagnosis, and based on the trajectory of advanced diagnostics the team has been conducting, I fully anticipate the president’s safe return to public engagements at that time,” Conley said.

The Centers for Disease Control and Prevention (CDC) recommends an infected person isolate for at least 10 days before engaging with other people. But the CDC also suggests that Covid-19 patients who have been hospitalized or who needed external oxygen — both criteria that apply to Trump — isolate for a total of 20 days after the onset of symptoms to ensure they are no longer infectious.

Conley’s assessments of the president’s health have been called into question before; he made misleading statements last week about Trump’s need for oxygen, later saying he misspoke. However, even if Trump is now well enough to participate in rallies, attendees may not be.

Guests at Saturday’s event were required to wear a face mask to enter the White House grounds, but were not required to wear it once inside, according to ABC News. Guests also reportedly had their temperature taken and completed a symptom questionnaire.

This sort of screening is limited in its effectiveness. For one, it misses asymptomatic people; for another, as Vox’s Brian Resnick has explained, scientists are still working to understand both when an infected person can begin to spread the coronavirus and whether infectious people can have negative test results.

All this is to say that there may be infectious people in the crowd despite these precautions. Photos from the event suggest some attendees were wearing masks, which can provide some protection even in scenarios with poorer ventilation than Saturday’s event.

But not all attendees appeared to be masked. And evidence suggests the event’s outdoor venue won’t necessarily prevent it from becoming another White House superspreader event, like the recent reception for Supreme Court nominee Judge Amy Coney Barrett, which appeared to result in the infection of numerous lawmakers and Trump associates. Similarly, an outdoor Trump rally in Minnesota last month resulted in at least nine infections and two hospitalizations.

Today’s speech seems to suggest that neither Trump nor anyone else in the White House have learned any lessons from that rally, or from the Barrett event.