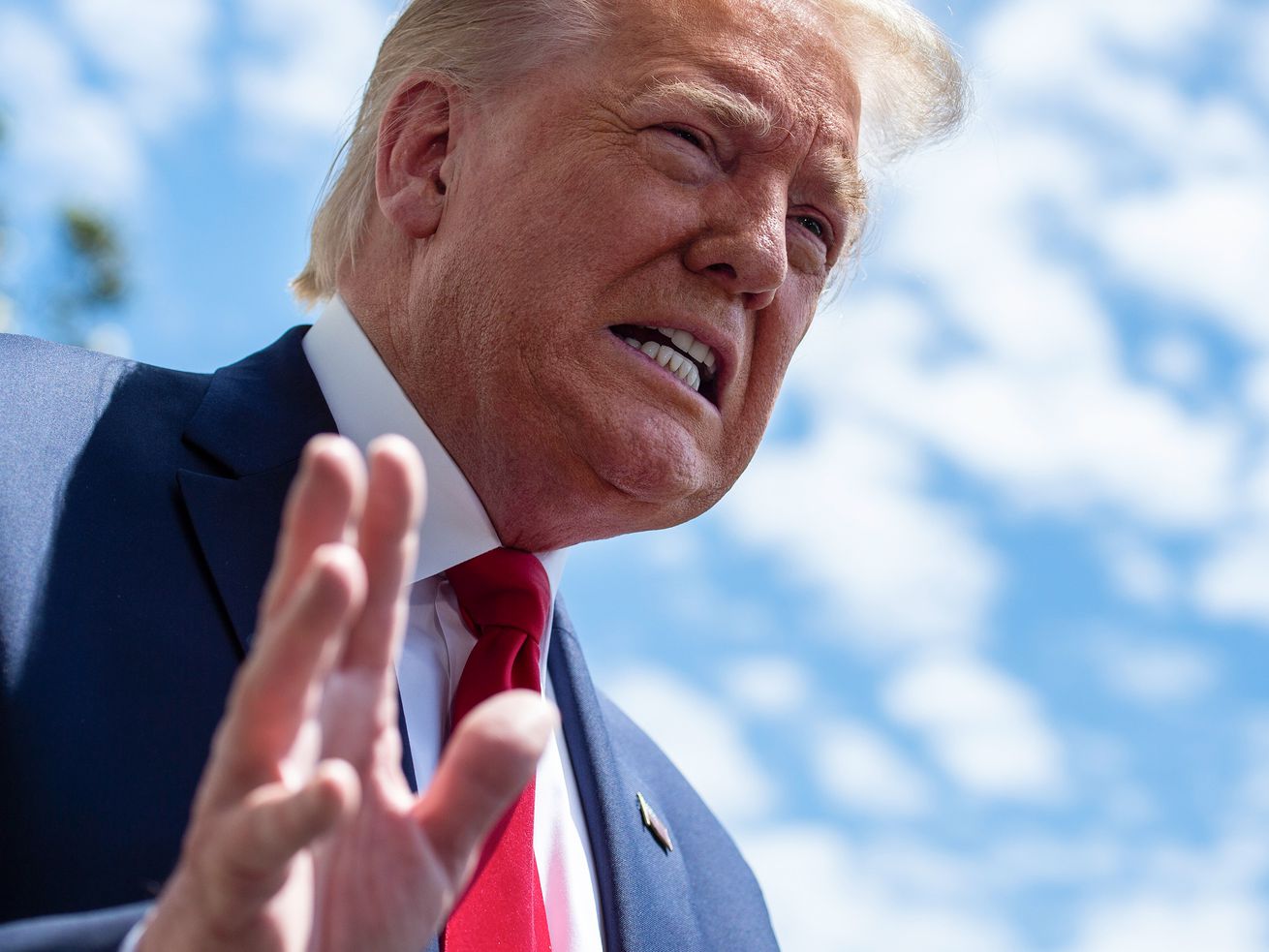 President Trump speaks to the press before departing the White House, on May 30. | Andrew Caballero-Reynolds/AFP/Getty Images

The threats have been compared to the tactics used against civil rights protesters in the 1960s.

President Donald Trump praised the Secret Service for their handling of a protest outside the White House Friday night and said if demonstrators had gotten closer to the residence they would have been met with “vicious dogs” and “ominous weapons” — violent imagery that Trump’s critics point out were tactics used against civil rights protesters in the 1960s.

The White House protest was one of many nationwide, in response to police brutality and racism, that broke out Friday night in the wake of the death of George Floyd, a black man who was killed by a white police officer during an arrest in Minneapolis on Monday.

Demonstrators didn’t come close to breaching the White House fence, Trump tweeted on Saturday morning, but if they had, “they would have been greeted with the most vicious dogs, and the most ominous weapons.”

“That’s when people would have been really badly hurt, at least,” he wrote.

….have been greeted with the most vicious dogs, and most ominous weapons, I have ever seen. That’s when people would have been really badly hurt, at least. Many Secret Service agents just waiting for action. “We put the young ones on the front line, sir, they love it, and….

Trump also said the Secret Service agents stationed to protect him were “just waiting for action” and, seemingly quoting a Secret Service official, wrote “‘We put the young ones on the front line, sir, they love it, and good practice.’”

Later that morning, he accused the White House protesters of being “professionally managed” and seemed to call for a counter-protest Saturday evening: “Tonight, I understand, is MAGA NIGHT AT THE WHITE HOUSE???”

Asked whether he was stoking racial tensions by pushing for a counter-demonstration, Trump refuted the suggestion.

“MAGA is make America great again. These are people that love our country. I have no idea if they’re going to be here. I was just asking,” he said, Politico reported. “By the way, they love African American people. They love black people.”

Many responded Saturday by pointing out the similarities between Trump’s “vicious dogs” threat and law enforcement response to people of color demonstrating for civil rights in the 1960s, when police used canine units to break up peaceful protests.

Yesterday, 46-1 quoted a racist Miami cop from the 60s, threatening to shoot Black people: “when the looting starts, the shooting starts.“

Today, he bragged that if protesters breached the WH fence they would’ve had “the most vicious dogs“ sicced on them, like the good ole days. pic.twitter.com/kn2a7xQBHw

It’s not the first time Trump has invoked civil rights-era imagery in discussing reaction to Floyd’s death. Criticizing Minneapolis Mayor Jacob Frey and property damage incurred in the wake of protests in a tweet on Thursday night, Trump wrote “when the looting starts, the shooting starts.”

The quote has a history of connection to racist policies.

In 1967, then-Miami police chief Walter Headley infamously used it while describing a brutal policing tactic his force planned to employ to stop crime in black neighborhoods.

Clarence Lusane of Howard University told WBUR that Headley may have picked up the term from the segregationist public safety commissioner of Birmingham, Alabama, Eugene “Bull” Connor. Connor set police dogs and fire hoses against black protesters in the 1960s.

Trump walked back the tweet on Friday, writing that his statement was “spoken as a fact, not as a statement” and was intended to explain why a man was shot and killed in Minneapolis during the unrest on Wednesday night.

Many took Trump’s second tweet referencing civil rights-era police brutality to be a clear message that he was attempting to increase racial divisions as the protests continue across the country.

Washington, DC Mayor Muriel Bowser, whom Trump falsely accused of not allowing local police to intervene in the protest outside the White House, urged the nation to “exercise great restraint even while this President continues to try to divide us.”