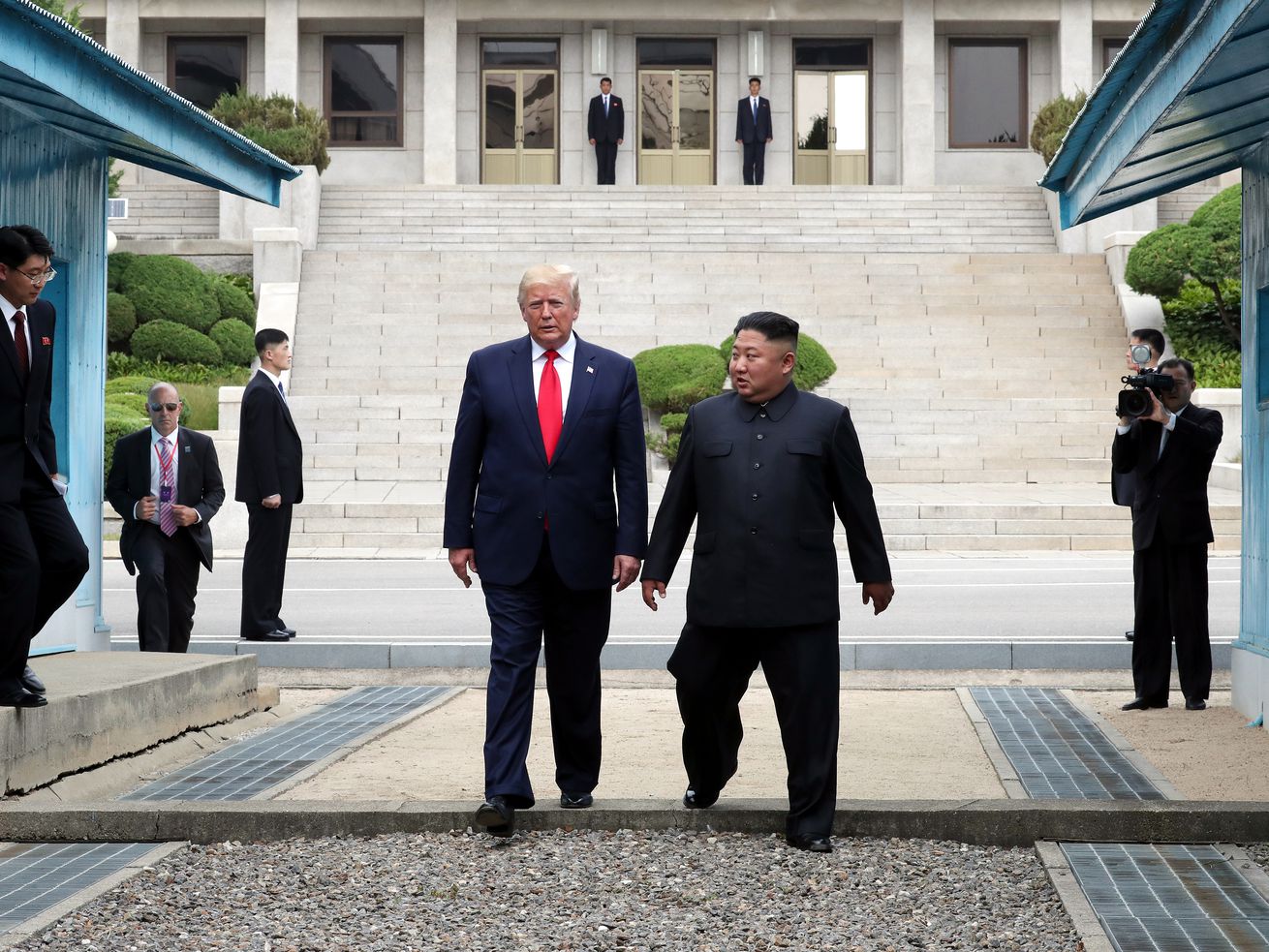 The president became the first sitting US president to step foot in the country.

Trump tweeted his desire to meet with Kim ahead of a trip to Seoul following the G20 summit in Osaka, Japan, writing, “If Chairman Kim of North Korea sees this, I would meet him at the border/DMZ just to shake his hand and say Hello (?)!”

After some very important meetings, including my meeting with President Xi of China, I will be leaving Japan for South Korea (with President Moon). While there, if Chairman Kim of North Korea sees this, I would meet him at the Border/DMZ just to shake his hand and say Hello(?)!

A North Korean official responded that the invitation was “interesting,” and from there, a meeting was quickly arranged.

Trump traveled to the demilitarized zone (DMZ) with South Korean President Moon Jae-In and met with troops stationed there before meeting Kim at a marker delineating the border between the two states.

“It is good to see you again,” Kim said to Trump through an interpreter as the two men shook hands. “I never expected to meet you in this place.”

The North Korean leader then invited Trump to cross into his country, reminding him that no sitting US president had ever done so. The president took him up on his offer, and walked over the demarcation line to applause from Kim.

“I actually stepped into North Korea and they say it’s a very historic moment,” Trump said. “Many people, I noticed, from Korea were literally in tears.”

After posing for photos, Trump and Kim met in a bilateral session at the Freedom House in border town of Panmunjom, South Korea. Kim and Trump expressed mutual admiration and hopes for their friendship to continue but did not get into details about denuclearization or sanctions relief. They did, however, agree to resume diplomatic talks that had been on hold following a breakdown in negotiations during the last US-North Korea summit in Hanoi, Vietnam.

Both men were optimistic following the conversation. Kim said, “Our great relationship will provide the magical power with which to overcome hardships and obstacles in the tasks that needs to be done from now on.”

Trump called the meeting “a great day for the world,” and told reporters he was very open to inviting Kim to the US, saying “I would invite him right now.”

President Moon praised Trump’s “creative and bold approach” in setting up the encounter and told him, “You actually presented a big hope to everyone, in particular a big hope to the Korean people here. And when I was looking at that tweet, I could really feel that the flower of peace was truly blossoming on the Korean Peninsula.”

“Pretty powerful thing, social media,” Trump said after the meeting while addressing US troops stationed at Osan Air Base. “We met at the DMZ, it was something incredible.”

US-North Korea diplomacy has advanced in fits and starts

The meeting between Kim and Trump represented a reboot of negotiations between the US and North Korea. A summit in Hanoi, Vietnam broke down after both sides found terms of reconciliation unacceptable, as Vox’s Alex Ward reported:

In February, Trump and Kim weren’t able to reach a nuclear agreement in Vietnam during their second summit. Kim wanted to walk away from Hanoi with nearly all sanctions removed for the closure of important nuclear sites, while Trump wanted Pyongyang to completely dismantle its nuclear arsenal before lifting any financial penalties.

That wide gulf led to an early breakdown in talks, turning the promise-filled meeting into a disaster for both leaders.

Complicating efforts to restart the talks have been a series of short range missile tests conducted by the North Koreans. All of the tests have been non-nuclear, and none of the tested weapons could reach the US, although all had the capability to strike US allies like Japan and South Korea. As Alex Ward wrote, the tests were likely a signal to Trump:

“North Korea has an incentive to ratchet up provocations,” said David Kim, a North Korea expert at the Stimson Center in Washington. He noted that Kim Jong Un left Hanoi embarrassed after failing to secure any tangible concessions from the Trump administration. The US and South Korea are also currently engaged in military exercises North Korea finds provocative. And on top of that, the US tested an intercontinental ballistic missile (ICBM) earlier this month.

All of those things put together may have made Kim feel it was time to send a signal that North Korea wasn’t going to be pushed around.

This posturing was followed by something of an olive branch, however. In late May, the state run Korean Central News Agency released a scathing assessment of one of Trump’s political rivals, Democratic presidential candidate Joe Biden. The article brought up issues from Biden’s past, and referred to him using unflattering language; at one point, it called the former vice president “a fool of low IQ.”

Trump made his approval of the message known both on Twitter and a press conference during a visit to Japan. Since then, he and Kim have exchanged letters; Kim said one of these was full “of excellent content” while Trump described a letter he received from the leader as “beautiful.”

All of this led to the historic DMZ meeting. Despite Trump’s budding friendship with Kim, little progress has been made by either side in achieving its foreign policy goals. North Korea still has its nuclear capabilities intact, and Kim has been largely unsuccessful in reducing sanctions on his country. Both leaders are clearly hopeful their personal relationship can lead to progress, but in order to avoid the sort of failure that happened in Hanoi, diplomats from both the US and North Korea will need to engage in long and careful negotiations. A timeline for those talks has not yet been set.