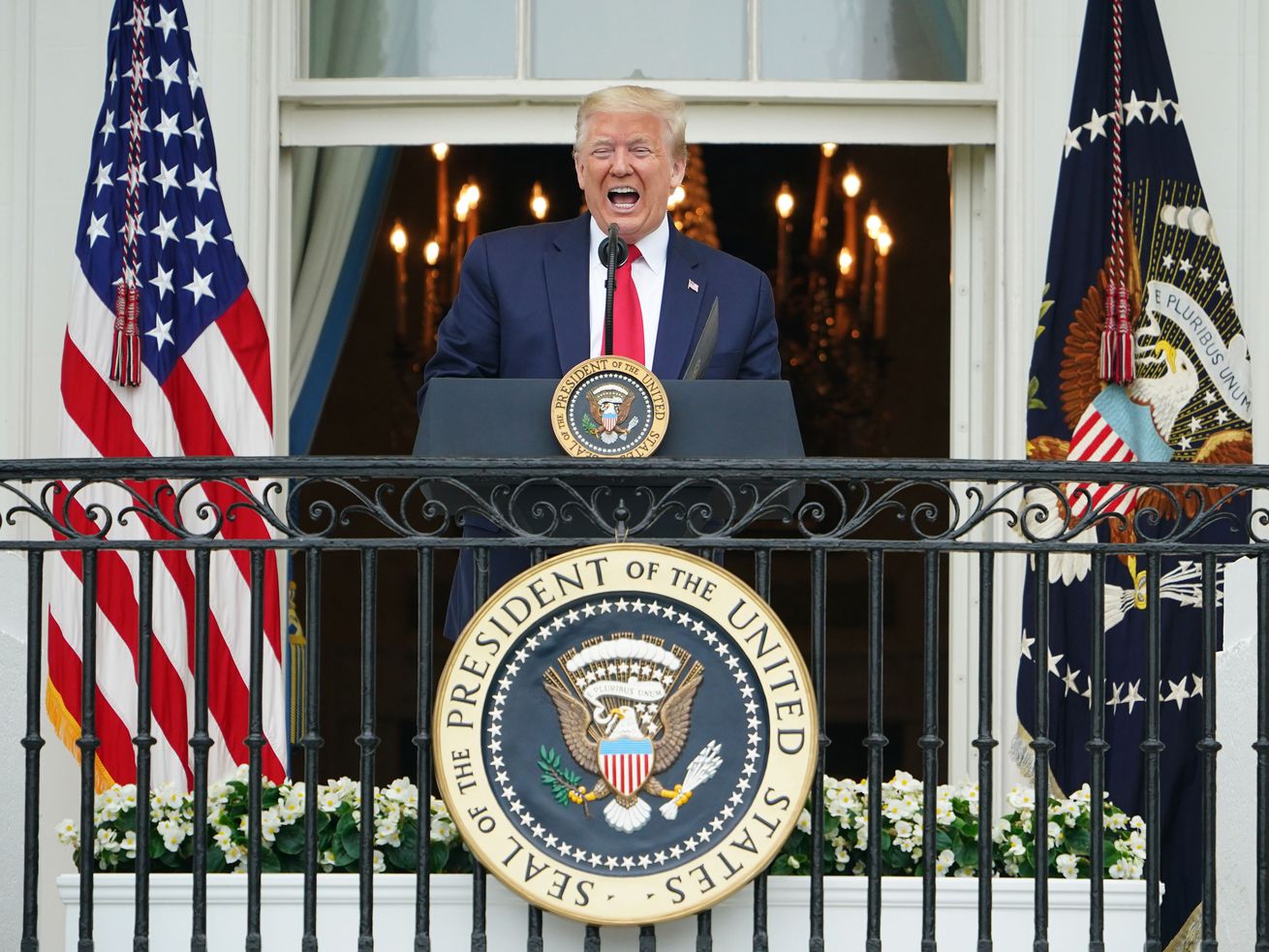 Ahead of the holiday, Trump made baseless claims of murder and shared personal attacks against Democratic women.

Memorial Day weekend is meant to be a somber occasion for commemorating the men and women who have lost their lives while serving in the United States military — and it’s a particularly tragic one in light of the rapidly mounting death toll from the coronavirus in the US, which is fast approaching 100,000 lives. But President Donald Trump spent the weekend tweeting conspiracy theories and deriding his political opponents’ physical appearance.

And in the few tweets he sent addressing the coronavirus pandemic, Trump shared misleading information. He did all this while playing golf for the first time in months — something he mocked former president Barack Obama for doing during the Ebola outbreak, which claimed two lives in the US.

Trump’s tweets about the coronavirus pandemic attempted to paint a positive picture of the situation in the US. On Sunday morning he tweeted, “Cases, numbers and deaths are going down all over the Country!”

Cases, numbers and deaths are going down all over the Country!

But in reality, the data doesn’t show this sort of broad improvement.

While it’s true that new cases and deaths have started trending downward overall, it’s unclear if the situation is improving. In several Southern states, there’s been a reported rise in cases. Arkansas Gov. Asa Hutchinson said Saturday his state is seeing a “second peak” in infections, and North Carolina reported its biggest one-day increase of confirmed cases this weekend. Ohio saw more than twice as many deaths Saturday as it did Friday. And of course, the national death toll continues to increase — it is expected to reach 100,000 on Monday or Tuesday. So while the national situation is looking better, many areas of the country are far from out of the woods. In other words, now is not exactly a time for celebration, particularly given that the effects of relaxed stay-at-home orders have yet to be fully determined.

Saturday night, Trump retweeted a Twitter user who claimed that hydroxychloroquine “Is Most Effective EARLY” for treating Covid-19. Trump also added a comment to his retweet, saying, “Many physicians agree with you. Also, some very good studies!”

But, as Vox’s Umair Irfan has explained, only poorly conducted studies have drawn this conclusion about the drug, which Trump claims he took as a preventive measure. Citing more rigorous studies, public health officials have long said hydroxychloroquine has not been clinically proven to be a treatment for the coronavirus, that there’s no evidence it can prevent Covid-19 — and that it can cause serious side effects that should discourage casual use based on the hope that it might work.

And a recent study published in the premier medical journal Lancet on Friday found that coronavirus patients who received hydroxychloroquine had a significantly higher risk of death compared with those who did not take it, and also were more likely to develop a type of irregular heart rhythm that can cause sudden cardiac arrest.

“It’s one thing not to have benefit, but this shows distinct harm,” Eric Topol, a cardiologist and director of the Scripps Research Translational Institute, told the Washington Post in regard to the study. “If there was ever hope for this drug, this is the death of it.”

Given that it’s Memorial Day weekend, the norm for a president would be to show deference to tradition and offer fairly apolitical remarks about the sacrifices made by American soldiers. But Trump instead spent most of it politicking in his usual adversarial, paranoid style, retweeting ugly attacks on Democratic women and promoting conspiracy theories about his foes.

He continued to push the bizarre — and as Vox’s Aaron Rupar has explained, evidence-free — claim that MSNBC host Joe Scarborough is guilty of murdering a former staffer during his tenure in the US House of Representatives.

The president followed this tweet with one Sunday in which he said he believes there is “a lot more to this story” than is contained in police reports and the wealth of reporting on the subject.

A lot of interest in this story about Psycho Joe Scarborough. So a young marathon runner just happened to faint in his office, hit her head on his desk, & die? I would think there is a lot more to this story than that? An affair? What about the so-called investigator? Read story! https://t.co/CjBXBXxoNS

Beyond suggesting there is some conspiracy around Scarborough, the president also tried to advance his ongoing and incorrect argument that mail-in ballots lead to voter fraud. There is absolutely no evidence that this is true or that mail-in voting poses a serious risk.

But that fact did not stop Trump from railing against the idea of expanding the ability of Americans to use mail-in ballots in November’s election, claiming without evidence that it would cause “the greatest Rigged Election in history” featuring “thousands of forgeries” and people stealing ballots from mailboxes.

The United States cannot have all Mail In Ballots. It will be the greatest Rigged Election in history. People grab them from mailboxes, print thousands of forgeries and “force” people to sign. Also, forge names. Some absentee OK, when necessary. Trying to use Covid for this Scam!

Those sorts of things have, of course, not happened in previous elections heavily reliant on mail-in ballots. As Sen. Mitt Romney has pointed out, most of Utah’s elections are done fairly and by mail. And as Rupar has written, “the only instance of large-scale mail-in election fraud possibly swaying an election in recent history is a Republican scheme in North Carolina in 2018. Other states with mail-in systems, such as Oregon, have safeguards preventing that sort of fraud from happening.”

The president’s retweets contained some similar distortion of reality — for instance, sharing an old video of presumptive Democratic nominee Joe Biden describing his role in relaying a message to Ukraine as evidence of corruption — as well as cruel attacks on women Democrats. He retweeted a Twitter user who made fun of former Georgia gubernatorial candidate Stacey Abrams’s appearance; took issue with House Speaker Nancy Pelosi’s facial features, teeth, and joked about taping her mouth shut; and who called former Democratic presidential nominee Hillary Clinton a “skank.”

These tweets are petty and misogynistic. But the fact that they are not out of the ordinary for the president is a reminder of how Trump has worked to change the standards to which presidents are held, and by which they are judged. And that they come amid a pandemic makes them particularly striking — as does the fact that Trump spent time golfing this weekend — the first time he’s done so in months.

While it’s not unusual for a politician to take time off from work, it is noteworthy that in 2014 Trump panned Obama for golfing during the outbreak of a virus that killed two people in the US.

“There are times to play and times that you can’t play. It sends the wrong signal,” Trump declared at the time.

And giving some advice to his predecessor he has clearly chosen not to take himself, Trump added, “You know when you’re president you sorta say, like, ‘I’m gonna give it up for a couple of years and I’m really gonna focus on the job.’”