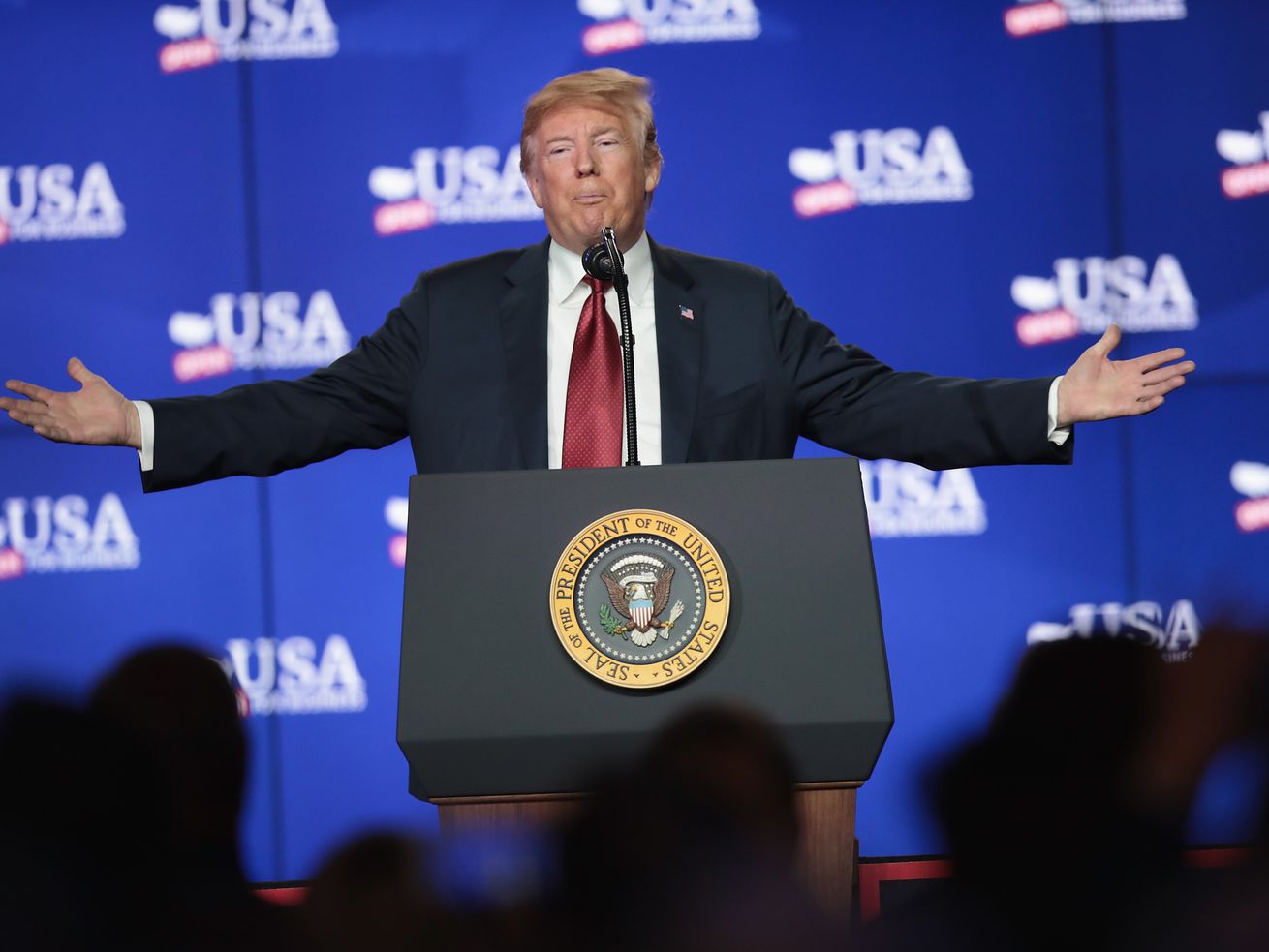 On CNBC, Trump demands tech giants let him have his way — or else.

President Donald Trump is interested in breaking up Big Tech — but not for the reasons you might expect.

While Democrats like Sen. Elizabeth Warren (MA) push for breaking up behemoths like Facebook and Amazon on the basis of their size and scale, Trump indicated during a CNBC phone interview on Monday morning that he’s interested in government intervention because, he claims, the companies aren’t treating him fairly — a claim he gave no evidence to support.

“Well, I can tell you they discriminate against me,” Trump said in an interview with CNBC’s Squawk Box. “You know, people talk about collusion. The real conclusion is between the Democrats and these companies. Because they were so against me during my election run. Everybody said, ‘If you don’t have them, you can’t win.’ Well, I won, you know, and I’ll win again because we are doing well. We are not fools anymore. We are not the foolish country that does so badly.”

Host Joe Kernen tried to press Trump on the point, asking him to set aside his personal grievances and address whether “just in terms of market size and market dominance, do you think that there is a monopoly, antitrust problem with those big companies?”

Trump didn’t really answer the question, but responded by indicated he’s interesting in having Attorney General William Barr follow the European Union’s model of “suing them all the time,” because it’s “easy money.”

“We have a great attorney general, we are going to look at it differently,” Trump said.

Well, there’s something going on, Joe. And I will tell you this: the European Union, which is a fantastic group of negotiators, actually a very, very prominent person who you know well, who’s on your show a lot, said the person at the European Union that’s in charge of taxation hates the United States more than any person anywhere in the world. And I really believe that’s true.

Every week you see them going after Facebook and Apple and all of these companies, that are, you know, great companies but something is going on. But I will say the European Union is suing them all the time. We are going to be looking at them differently. We have a great attorney general, we are going to look at it differently.

When they give European Union $7 billion and $5 billion and $2 billion, and you know, Apple gets sued for $10 billion. And you know, right now, it is going on but they’ll end up settling. They get all this money. We should be doing that – they’re our companies, so they’re actually attacking our companies. But we should be doing what they’re doing. They think there is a monopoly. But I am not sure if they think that. They just figure this is easy money, we’ll sue Apple for $7 billion and we’ll make a settlement or we’ll win the case. So, I think it is a bad situation. But, obviously, there is something going on in terms of monopoly.

The irony is that not only were major tech companies not biased against Trump in 2016, but Facebook and Twitter were actually instrumental in the Kremlin-orchestrated disinformation campaign that helped him get elected. As special counsel Robert Mueller detailed during his investigation into Russian election interference, Kremlin agents spent millions of dollars purchasing ads aimed at helping Trump and used sock puppet accounts to spread pro-Trump messages. More recently, the Trump campaign has been running ads on Facebook that appear to violate the company’s terms of service against misleading content, but there’s no indication Facebook has taken action to stop it.

Trump, however, seems to view Big Tech’s efforts to crack down on harassment and misinformation as a personal attack against him:

Twitter should let the banned Conservative Voices back onto their platform, without restriction. It’s called Freedom of Speech, remember. You are making a Giant Mistake!

The message Trump sent to Facebook, Google, Amazon, and other tech giants on CNBC was clear: They should do his bidding if they want to avoid the federal government interfering in their affairs. It’s just the latest illustration of how Trump is trying to weaponize the Justice Department against his perceived enemies.

The rest of the CNBC interview was barely coherent, but that’s par for the course with Trump

Trump, who has been publicly pushing for the Federal Reserve to cut interest rates for months, opened the CNBC interview by calling the Fed “very, very destructive.”

“We have people — it’s more than just Jay Powell — we have people on the Fed that really weren’t, ah, they’re not my people,” Trump said, disregarding the fact he’s actually appointed four of the five current board members.