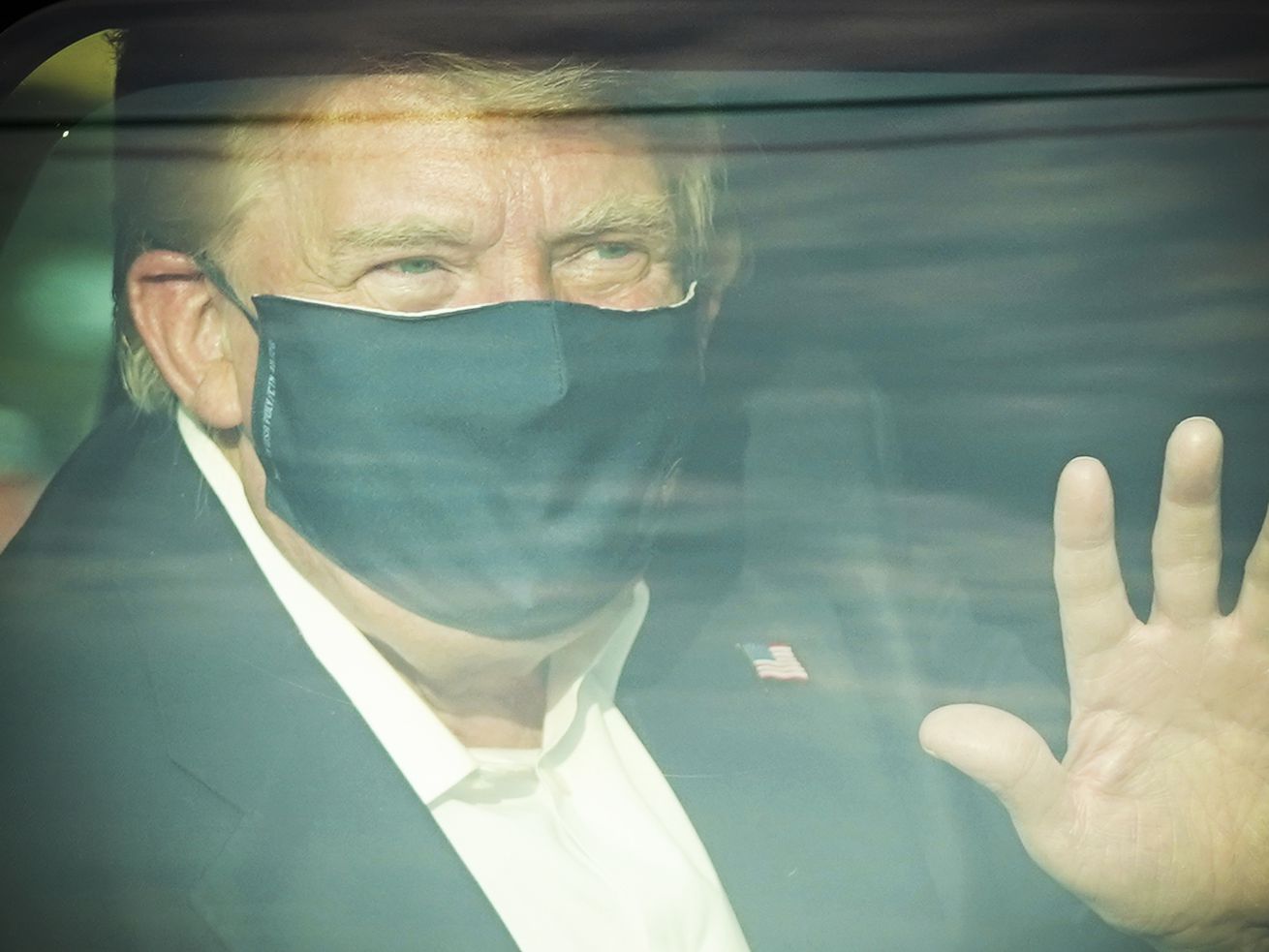 President Trump drives past supporters in a motorcade outside of Walter Reed medical center in Bethesda, Maryland, on October 4. | Alex Edelman/AFP via Getty Images

“Don’t be afraid of Covid,” he tweeted.

President Trump was discharged Monday evening from Walter Reed National Military Medical Center, after downplaying Covid-19, a disease that has killed more than 200,000 Americans and more than a million people worldwide in a tweet.

“Don’t be afraid of Covid,” he tweeted. “Don’t let it dominate your life.”

I will be leaving the great Walter Reed Medical Center today at 6:30 P.M. Feeling really good! Don’t be afraid of Covid. Don’t let it dominate your life. We have developed, under the Trump Administration, some really great drugs & knowledge. I feel better than I did 20 years ago!

Trump’s physician Sean Conley explained the rationale for the discharge in an afternoon briefing. “Over the past 24 hours, the president has continued to improve,” Conley said. “He’s met or exceeded all standard hospital discharge criteria” and will continue to be monitored at home.

Trump — a lifelong germaphobe — had been eager to get out of Walter Reed. According to CNN’s Jim Acosta, he was concerned that being hospitalized “makes him look weak.” Separately, sources told the New York Times that a Sunday evening drive — in which he put Secret Service staff at risk of infection — was a compromise after he’d asked to be discharged yesterday and doctors refused.

The rush to get out of the hospital may make sense politically: A Covid-19 infection, during which a patient is supposed to remain isolated, is extremely inconvenient for Trump’s presidential campaign, less than a month before the election.

“The most monitored man in the world”

But does it make sense medically? While there are many unknowns about the severity, or stage, of Trump’s Covid-19 case, clinicians who work with coronavirus patients said Trump’s discharge isn’t completely unreasonable. It could simply indicate the president doesn’t need intensive care unit (ICU)-level attention, such as access to a ventilator, right now.

“It doesn’t mean he wasn’t sick and it doesn’t mean he’s 100 percent out of the woods,” said Jennifer Manne-Goehler, an infectious disease doctor at Brigham and Women’s and Massachusetts General hospitals. “It means he’s stable in a way he can be followed at home, and [doctors] feel comfortable he doesn’t need ICU level care.”

“It isn’t unreasonable to be treating patients at home like this for Covid because you’re actually reducing risk of infection without necessarily compromising patient care,” said intensive care physician Lakshman Swamy, who works with the Cambridge Health Alliance.

Plus, unlike other patients, the commander in chief isn’t going back to a normal home. He essentially lives in a hospital. The White House medical unit has a full team of health professionals at the ready who can do most of what’s possible for patients. “You can’t run an ICU at home but at the White House you can make supplemental oxygen easily available, IV medications available as needed,” Manne-Goehler told Vox. “It certainly indicates they don’t think he’s at the precipice.”

Theodore Iwashyna, a professor of internal medicine at the University of Michigan, said he wasn’t worried that Trump would be left alone. “He’s the most monitored man in the world.”

What we can learn from Trump’s case

Trump is likely still infectious, and it will take at least a week to know whether the president truly avoided life-threatening complications from the disease. Covid-19 patients can seem stable, and then rapidly deteriorate without warning. It’s not until 10 days after symptoms appear that doctors say they can be reasonably sure that someone has truly turned a corner.

When you sit and watch so many people die of this of all ages — it’s scary. We shouldn’t underestimate this.

Even then, there’s the risk of what’s become known as “long Covid,” which involves chronic symptoms such as cognitive impairment and depression. There’s no correlation between the severity of a person’s Covid-19 case and whether they become a “long hauler.”

Whatever happens, Swamy warned about extrapolating anything to the general population from Trump’s recovery from Covid-19. “Those of us that took care of a burden of patients with the virus during the surge … [saw] it’s very hard to learn based on a few patients” what treatment approaches work.

Other doctors said they worried some people who haven’t yet been infected with the virus might get the wrong impression from the president about the risks. “It scares me people will say ‘it’s not a big deal, and 99 percent of people do fine,’” after seeing Trump emerge from the hospital, Manne-Goehler said. “When you sit and watch so many people die of this of all ages — it’s scary. We shouldn’t underestimate this.”

Iwashyna offered a colorful analogy to explain how he’d think about the meaning of Trump’s apparent recovery: “I live in a college town. Every now and then — people get drunk and wander down the street naked and drunk. And they don’t always get hit by a car. It would be a mistake from my perspective to say that means getting drunk and wandering naked down the street is safe.”

In other words, even if Trump — with the unusually attentive care and monitoring he received — has been able to recover from Covid-19, the disease is still serious. “I’m still going to be wearing a mask when I go out,” Iwashyna added, “regardless of what happens to the president.”

What Team Trump has been saying about the president’s health

In the coming days, we’ll learn more about Trump’s Covid-19 case. For now, the picture remains opaque. Even for a White House with a terrible track record of truth-telling, the mixed messages of the last few days has been significant. And that’s led doctors to question whether Trump’s case was more serious than the White House is letting on and when Trump was actually diagnosed.

On Friday, after announcing Trump’s positive Covid-19 test result — and that the president had only mild symptoms — White House press secretary Kayleigh McEnany disclosed Trump was leaving the White House for Walter Reed medical center “out of an abundance of caution.”

By Saturday’s press conference, Conley said Trump was in good condition but wouldn’t release basic details of Trump’s case, bungled the timeline of the president’s diagnosis, and later released a letter to correct it. That same day, White House Chief of Staff Mark Meadows contradicted Conley, saying Trump’s vitals were “very concerning,” in what was supposed to be an off-the-record statement that got recorded on video.

On Sunday, Conley said Meadows’s statement was “misconstrued” and that Trump’s oxygen levels had twice dropped to worrisome levels since Friday, requiring supplemental oxygen to bring them back up. Conley said he’d withheld these details because he wanted to “reflect the upbeat attitude that the team, the president” has had about the course of Trump’s illness.

Adding to the confusion, Conley shared that Trump on Saturday started yet another drug to fight Covid-19: dexamethasone. The steroid has been shown in clinical trials to improve outcomes but is only recommended for patients with severe or critical Covid-19. It’s also the third Covid-19 drug to be administered to the president, following an experimental monoclonal antibody treatment given Friday and an ongoing, five-day course of the antiviral remdesivir.

By Monday, Conley said Trump continued to improve. “It’s been more than 72 hours since his last fever. Oxygen levels, including ambulatory saturations and his lack of breathing, are all normal.” Trump will continue taking dexamethasone, and get a fourth dose of remdesivir before leaving the medical center, he added.

There are big holes in the narrative about Trump’s illness

But when pressed for details about Trump’s health, Conley once again obfuscated. For example, Trump’s doctors have not released the results of the president’s chest X-rays or CT scans, so it’s not clear if they’d found signs of pneumonia or other manifestations of Covid-19 lung involvement.

And these are exactly the things that will be critical to monitor in the coming days. “The first is making sure he doesn’t develop a worsening of Covid,” said Iwashyna, which means checking that Trump is not developing pneumonia and that his oxygen saturation levels aren’t declining.

Then there are the secondary complications that could arise, such as a reduction in heart function. Steroids like dexamethasone, meanwhile, are known to increase the risk of bacterial infections and blood clots.

The president also got a cocktail of drugs, some with known and some with unknown side effects.

“He was also given a drug that is not approved and has not had adequate safety [testing] right now, at a dose that is not even the dose they’re recommending to push forward in trials,” Iwashyna said. “So the possibility of complications from the antibodies will be around for at least days, maybe weeks or months.”