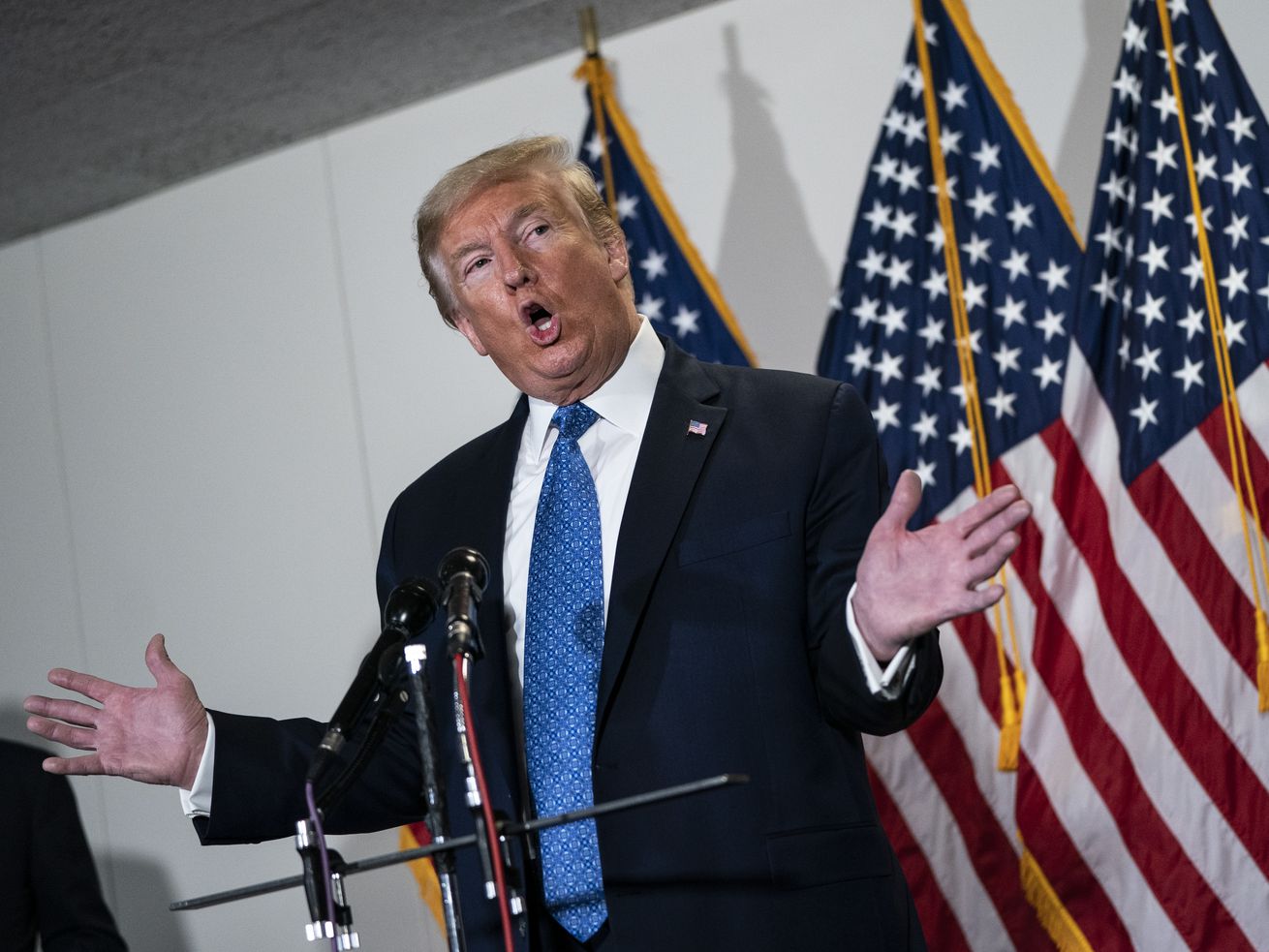 Trump at the Capitol on Tuesday. | Drew Angerer/Getty Images

Trump is now suggesting his own government is part of a conspiracy to demean his favorite unproven drug. Really.

President Donald Trump is now dismissing medical information promulgated by his own government as a “Trump enemy statement.”

Trump made that remark on Tuesday afternoon, when he was asked following a lunch with Republican senators to explain his rationale for promoting unproven and potentially dangerous hydroxychloroquine treatments for coronavirus. The president’s ensuing effort to defend the stunning announcement he made on Monday that he’s taking the anti-malarial drug didn’t end up making much sense. But it did reveal a reflexive contempt for scientific reasoning that undercuts his talking points.

“Why is it okay for you to promote the use of this drug when you’re not a doctor?” a reporter asked. Trump responded by making a case that he knows better than medical professionals do.

“I worked with doctors,” he began. “If you look at the one survey, the only bad survey, they were giving it to people that were in very bad shape, they were very old, almost dead. It was a Trump enemy statement.”

“It was a Trump enemy statement” — Trump dismisses doctors who have warned about possible bad consequences of hydroxychloroquine and insists he knows better pic.twitter.com/CiyTtOBJlu

The “Trump enemy statement” in question is a study of coronavirus patients in Veterans Affairs hospitals that became the basis for a Food and Drug Administration (FDA) warning about hydroxychloroquine treatments for coronavirus.

The study, which the National Institutes of Health posted to its website last month and is the largest of its kind, was not peer-reviewed, but it found more deaths among those treated with hydroxychloroquine than those treated with standard care. Researchers also reported finding no benefit to its use.

The Food and Drug Administration (FDA) subsequently posted a warning on its website that “cautions against use of hydroxychloroquine or chloroquine for COVID-19 outside of the hospital setting or a clinical trial due to risk of heart rhythm problems.”

To hear Trump tell it, however, the FDA has been infiltrated by his deep state enemies.

“That was a false study done. Where they gave it to very sick people. Extremely sick people. People that were ready to die. It was given by obviously not friends of the administration,” Trump said later Tuesday, during a roundtable event at the White House.

“That was a false study done. Where they gave it very sick people. Extremely sick people. People that were ready to die. It was given by obviously not friends of the administration” — Trump defends hydroxychloroquine by suggesting a study of VA patients was fruit of a conspiracy pic.twitter.com/a3neqa2U4y

It should go without saying at this point that it’s a bad idea to take medical advice from Trump — recall that his daily coronavirus press briefings basically came to an end last month after he was widely mocked for musing aloud about the possibility of treating the coronavirus with disinfectant and bizarre sunlight treatments.

Still, it’s instructive to note how quick the president is to attribute any conclusion that contradicts him as the product of an anti-Trump conspiracy, even when the conclusion in question comes from his own government.

Trump simply dismisses experts who don’t agree with him

It’s not like the study of VA patients was the first to raise concerns about hydroxychloroquine. The drug is an effective treatment for malaria, but doctors have long warned that taking it can result in drug-induced cardiac arrest for a small subset of the population.

Those risks might be worth taking if it turned out that hydroxychloroquine was effective in helping people recover from coronavirus infections. But health officials have consistently said preliminary research shows the opposite — and that more rigorous research into the drug still needs to be conducted.

To cite one notable example, a day after Trump called the drug a “game changer” on March 20, his top health official on the coronavirus, Dr. Anthony Fauci, told the press it was too soon to say whether the drug was safe or effective.

“The information that you’re referring to specifically is anecdotal,” Fauci said, alluding to non-randomized, non-peer-reviewed studies conducted abroad that Trump has repeatedly invoked as evidence of hydroxychloroquine’s efficaciousness, including on Tuesday. “It was not done in a controlled clinical trial. So you really can’t make any definitive statement about it.”

Clashes between Trump and government public heaths experts over unproven drugs led to the abrupt exit of Dr. Rick Bright as director of the Department of Health and Human Services’ Biomedical Advanced Research and Development Authority, the federal agency tasked with developing a coronavirus vaccine. Last month, Bright, who has since become a whistleblower, released a statement indicating he was pressured to give the green light to hydroxychloroquine treatments.

“While I am prepared to look at all options and to think ‘outside the box’ for effective treatments, I rightly resisted efforts to provide an unproven drug on demand to the American public,” Bright said. “I insisted that these drugs be provided only to hospitalized patients with confirmed Covid-19 while under the supervision of a physician.”

Trump’s infatuation with hydroxychloroquine can be traced back to a controversial French study released in March on a small number of Covid-19 patients that found hydroxychloroquine could lessen the duration of infection. As Media Matters for America has detailed, the French study and similar anecdotal evidence from China was covered by Fox News and amplified by Trump, with Trump’s amplification in turn being covered by Fox — in other words, it was the perfect illustration of the Fox-to-Trump feedback loop.

As it became clear that the United States was going to be especially hard hit by the coronavirus pandemic, Trump became insistent that the drug could be a savior, despite Fauci’s position.

“I answered this 15 times. You don’t have to answer.” — Trump prevents Dr Fauci from answering a question about hydroxychloroquine pic.twitter.com/8R1K1hDsaX

The study of VA patients seemed to cool Fox News’s enthusiasm for hydroxychloroquine, at least among certain anchors. Anchor Neil Cavuto even went as far as to warn his viewers immediately after Trump’s announcement on Monday that taking the drug without a doctor’s supervision can result in death for populations at risk.

Fox News’s Neil Cavuto is stunned by Trump’s announcement that he’s taking hydroxychloroquine: “If you are in a risky population here, and you are taking this as a preventative treatment … it will kill you. I cannot stress enough. This will kill you.” pic.twitter.com/e6D5alfAgc

Cavuto reiterated his concerns on Tuesday, following a roundtable event in which Trump falsely claimed about hydroxychloroquine that “what has been determined is it doesn’t harm you.”

Instead of engaging with Cavuto’s measured criticisms, Trump on Monday evening posted a string of retweets demeaning him. Around the same time, Trump’s White House doctor released a statement saying of hydroxychloroquine that “we concluded the potential benefits from treatments outweighed the relative risks” — but notably, it stopped short of confirming that Trump is in fact taking the drug.