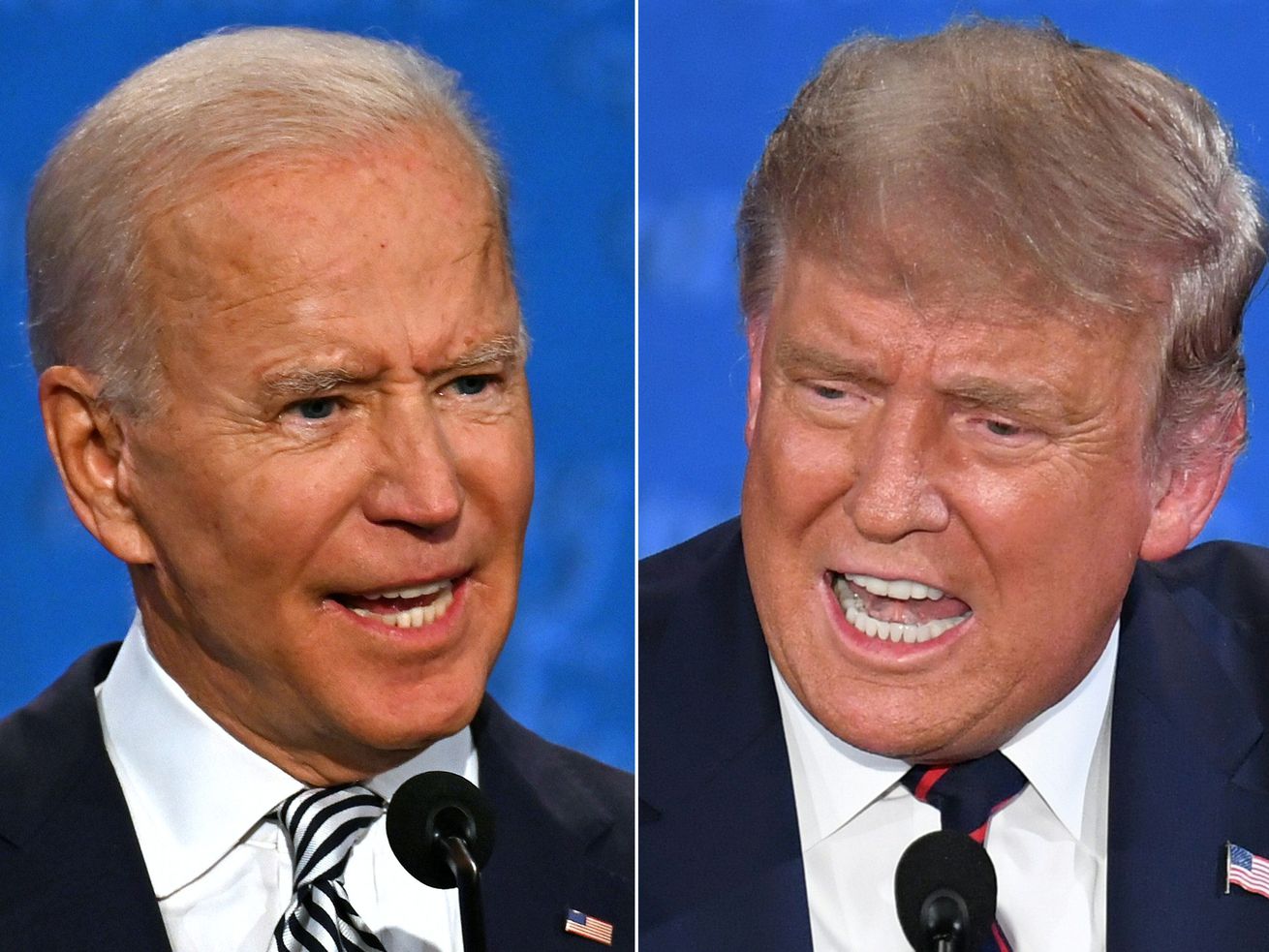 President Donald Trump and Democratic nominee Joe Biden at the first presidential debate on September 29. With the second debate canceled, both candidates will hold their own town hall. | Jim Watson, Saul Loeb/AFP/Getty Images

The Trump campaign refused to agree to a virtual debate. Now each candidate will host his own event.

Now, instead of holding a single town-hall-style debate, each candidate has lined up a town hall of his own.

During the time the debate was originally going to be held, the former vice president will hold a town hall hosted by ABC’s George Stephanopoulos in Philadelphia. The event will run from 8 to 9:30 pm ET and will be held in person, but in compliance with state and local health regulations and health experts’ guidelines. Trump is in the process of setting up a similar event on NBC. His town hall has not yet been confirmed, but it would take place outdoors in Miami and be moderated by Today show co-host Savannah Guthrie, according to Brian Stelter and Oliver Darcy at CNN.

The result is dueling town hall events, setting up competition between the candidates and networks for viewership ratings.

The format isn’t new to either candidate; Stephanopoulos hosted a town hall with Trump on September 15 in Philadelphia, and Biden has held several town hall discussions with undecided voters in recent weeks, including one with NBC in Miami — where Thursday’s debate was going to take place — on October 5.

The coronavirus has made holding live events difficult

The whole debate schedule has been thrown into chaos after Trump announced that he had tested positive for the coronavirus early in the morning of October 2, less than three days after the first presidential debate in Cleveland, Ohio. After three days at Walter Reed National Military Medical Center, he returned to the White House and has since resumed campaigning. He spoke to a packed crowd on Saturday from the White House balcony, then held a full-scale rally on Monday evening in Sanford, Florida.

The president’s diagnosis, and those of more than 20 other people connected to the White House, made last Wednesday’s vice presidential debate uncertain. Vice President Mike Pence never tested positive, but he was exposed to Trump and several others who did. Despite the recommendations of a number of health experts that the debate between Pence and Sen. Kamala Harris be canceled or moved virtual, it was still held in person in Salt Lake City, Utah, albeit with some extra precautions.

Trump and his campaign protested vigorously against a virtual debate, alleging it would give Biden the opportunity to receive outside help. The president has repeatedly and without evidence questioned his opponent’s mental acuity, even suggesting Biden would be using an earpiece at the first debate and demanding that he take a drug test.

Trump campaign manager Bill Stepien put out a statement after the debate commission announced the second debate would be virtual, saying “we’ll pass on this sad excuse to bail out Joe Biden and do a rally instead.” A virtual debate would thrust into the spotlight the reasons for it being held virtually — namely, the Trump administration’s inadequate response to the Covid-19 crisis and the president’s disregard for safety measures.

In response, Biden’s campaign said the Democratic nominee would not attend the debate if Trump refused to do so, so the debate commission decided to cancel it. In a statement last Friday evening, the commission said it is turning its attention to the final presidential debate, which is still scheduled for October 22 in Nashville, Tennessee.

The Trump campaign had proposed delaying each of the last two debates a week, to October 22 and 29, respectively, but the Biden campaign has pushed back on that, instead saying the October 22 debate should now be the town hall. As Biden spokesperson Kate Bedingfield pointed out in a statement, no presidential debate in the past 40 years has taken place later than October 22.