TORY leadership hopefuls will be grilled by sixty colleagues as they make their bid for Downing Street – and how they aim to break the Brexit deadlock.

Candidates have been given thirty minutes each to impress the One Nation Caucus to make their case to the socially liberal wing of the party.

Up to eight candidates will be given a slot on either Tuesday or Wednesday this week in the first of the official hustings.

Ms Rudd said: “We are keen to understand how the candidates in the race intend to break the impasse with the European Union so we can leave with a Deal.

“Whomever becomes the new prime minister will have done so after winning the support of MPs and 160,000 members.

“They will immediately have the opportunity to chart a new, positive vision for Britain. 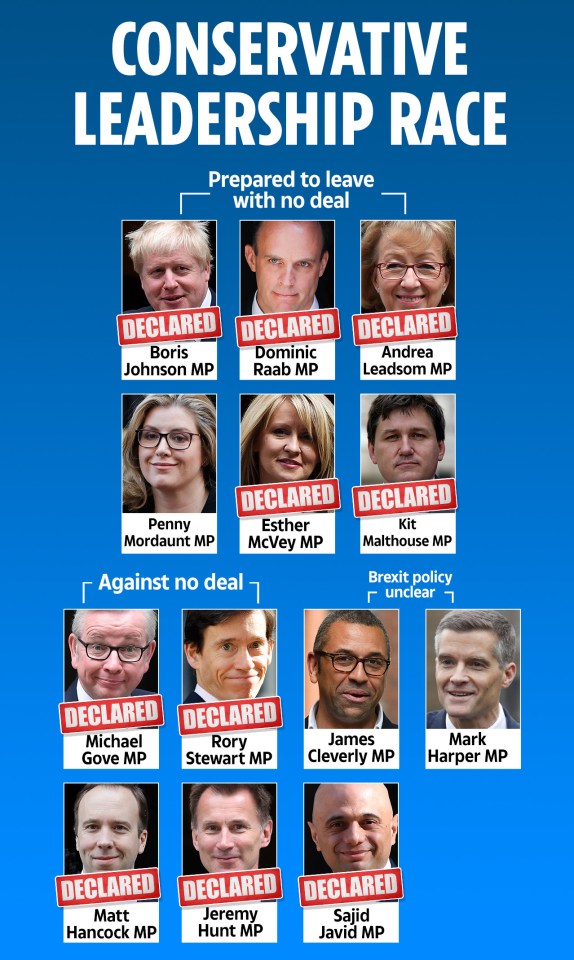 MOST READ IN BREXIT

‘ASHAMED OF MY COUNTRY’

Who will be the next UK Prime Minister? Latest odds after PM resigns

LET’S DO A NO DEAL

Farage names Boris, Raab & McVey as Tories he could work with on Brexit

“They can use that to enter into another battle with Parliament over No Deal which is something the public find trivial. Or they can find a new way.

“At the hustings this week I want and hope to hear more, with the majority of candidates saying they want a Deal with the European Union.

“So it is my view they should be realistic about to the practicalities of negotiating one.”