THE next Prime Minister is set to face rounds of public grillings to avoid another ‘Maybot’ with a wooden appearance.

Leading Tories will be forced to prove they can perform – possibly with a TV debate too.

The Sun revealed that Tory activists are demanding a whopping 18 different hustings events across the country.

Grassroots bosses have made it clear to Conservative HQ that they expect the final candidates to do two events in front of them in each of the nine national regions across the UK.

Theresa May’s tearful resignation yesterday fired the starting gun on a leadership battle where around 20 Tories could take part.

For the first time, non-party members are set to be allowed to attend debates – even though they don’t have a vote for the next Tory leader and PM.

Party chiefs want to broaden out the process to try and make the public feel involved in picking the next PM.

Chairman of the National Conservative Convention, the party’s voluntary wing, Andrew Sharpe told The Sun: “It’s important the membership all get a chance to hear from the candidates themselves wherever they are, in whatever geographical region.

“The membership would be extremely unimpressed if the process was truncated.”

There is also talk of a live debate like the kind that has been seen in general elections in the past.

Mrs May ducked TV debates during the 2017 race as she didn’t want to go up against Jeremy Corbyn.

Tory Home Secretary Amber Rudd attended the debate in her place at the time, but was attacked for failing to meet with real people and coming up for the cameras.

She was dubbed the Maybot for appearing unable to talk to voters and giving stock answers to questions.

The PM went on to lose her majority, leading to her ultimate downfall over Brexit. 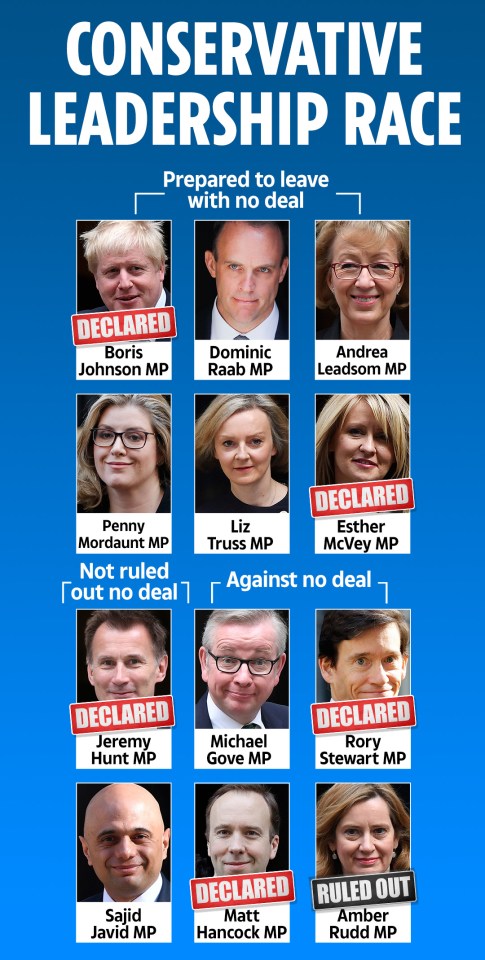 What next after Theresa May quits?

The Prime Minister will formally stand down as party leader on June 7 – but will stay in place while the new PM is being chosen, rather than handing over to an interim chief such as David Lidington.

Any Tory MP can enter the race, and the list of contenders is then whittled down by the parliamentary party.

MPs vote in multiple rounds, eliminating one candidate each time until just two are left.

The party’s 120,000 activists then choose behind the final shortlist of two, with the winner declared leader and Prime Minister.

When Mrs May became leader, she didn’t have to submit to a vote of members because Andrea Leadsom pulled out of the race.

So the last time activists have had a say on the leadership was 2005, when David Cameron defeated David Davis.

When do we find out the results of the EU Parliament elections in the UK?

MATT IN THE RING

Remainer Matt Hancock confirms he WILL run to replace Theresa May

THE END OF MAY

The 313 Conservative MPs will whittle down a wide field of as many as 12 candidates for the top job with a series of knockout ballots, from the week of June 10.

The final candidates will then be dispatched out to the party’s 150,000 members for grillings, by the start of July.

Last time around in 2016 Andrea Leadsom dropped out of the race early, handing the crown to Mrs May before the members could have their say.

We pay for your stories! Do you have a story for The Sun Online politics team? Email us at tips@the-sun.co.uk or call 0207 782 4368. We pay for videos too. Click here to upload yours