TOMMY Fury slid into Lauren Goodger’s DMs with a series of flirty messages while he was with ex-girlfriend Millie Roberts, according to reports.

The professional boxer, 20, is currently coupled up with influencer Molly-Mae Hague, 20, in the Love Island villa, but allegedly had eyes for former Towie babe Lauren, 32, between December and April.

Tommy Fury slid into Lauren Goodger’s DMs with a series of flirty messages while he was with ex-girlfriend Millie Roberts, according to reports[/caption]

Tommy was with Millie during that time, only ditching his ex weeks before the start of Love Island at the beginning of June.

In March the pair shared flirty comments underneath a video of one of Tommy’s fights.

A source told The Mirror: “Tommy was sending her flirty messages asking to meet up. They spent a lot of time talking on FaceTime, and she started to fancy him.

“She asked if he had a girlfriend. He said he couldn’t be more single. He’d say he couldn’t wait to meet up for a drink, but it never happened.

“He was really complimentary to her and was always saying how sexy she was. Lauren went off him romantically and they never got round to organising a date.”

Tommy was allegedly desperate to meet up with Lauren[/caption]

The Sun Online has contacted a representative for Tommy.

Just days ago Millie claimed Tommy stopped her from wearing revealing clothes and from going out with her friends before he dumped her to go on the hit reality show.

The beauty, who says she split from the boxer in March of this year, opened up their romance telling fans how he wanted her to be “reserved and modest”.

During a Q&A on Instagram stories, she wrote: “He wouldn’t want me wearing revealing clothes, wouldn’t let me go to certain places in town he wanted me to be very reserved and modest. But ya gal likes a drink in a mini dress so.”

She admitted she was finding it hard to watch the show, telling her followers:  “I’m not watching this year’s Love Island, as you can imagine watching your ex graft other girls on TV is very hard and not something I want to put myself through.”

Millie claims the couple split in March but he was approached to do the show after his first pro fight, which led to a number of break ups between them.

“He was approached after his first pro fight. Then I would say in the space of three months we split up about 5 times,” she revealed. 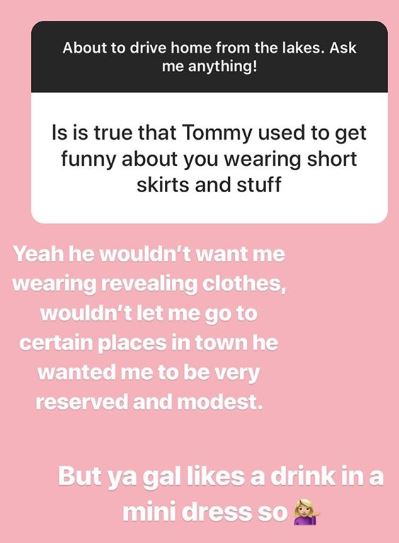 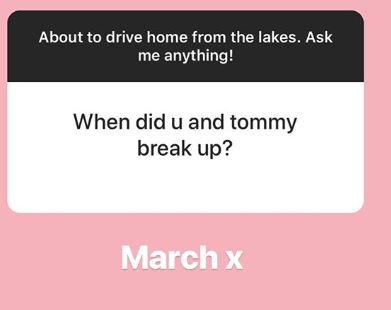 “He said that Love Island was something he had to do for his career and he did offer to stay with me. For me no amount of money or fame could ever replace love and happiness.

“You can have all the money in the world but that does not make you happy.”

Millie had no idea that Tommy was doing the show and says the last time she saw him he spent time reassuring her.

When asked what he said to her, she replied: “That he missed me and reassured me he didn’t break up with me to go on the villa he just wants to concentrate on this boxing. LOL.”

Tommy has made quite a stir during his time on the show due to being such a hit with the ladies.

Scorned Millie previously lashed out at Tommy after she found out he’d told producers that they split 10 months ago.

She accused him of lying about how long he’s been single and insisted they were together this year.

Taking to Instagram stories, a furious Millie shared a snap of herself and Tommy, which she claims was taken on 19 Feb 2019 – saying: “Didn’t realise Feb-March was 8-10 months ago?

“I know your not the best at maths but this is no excuse.”