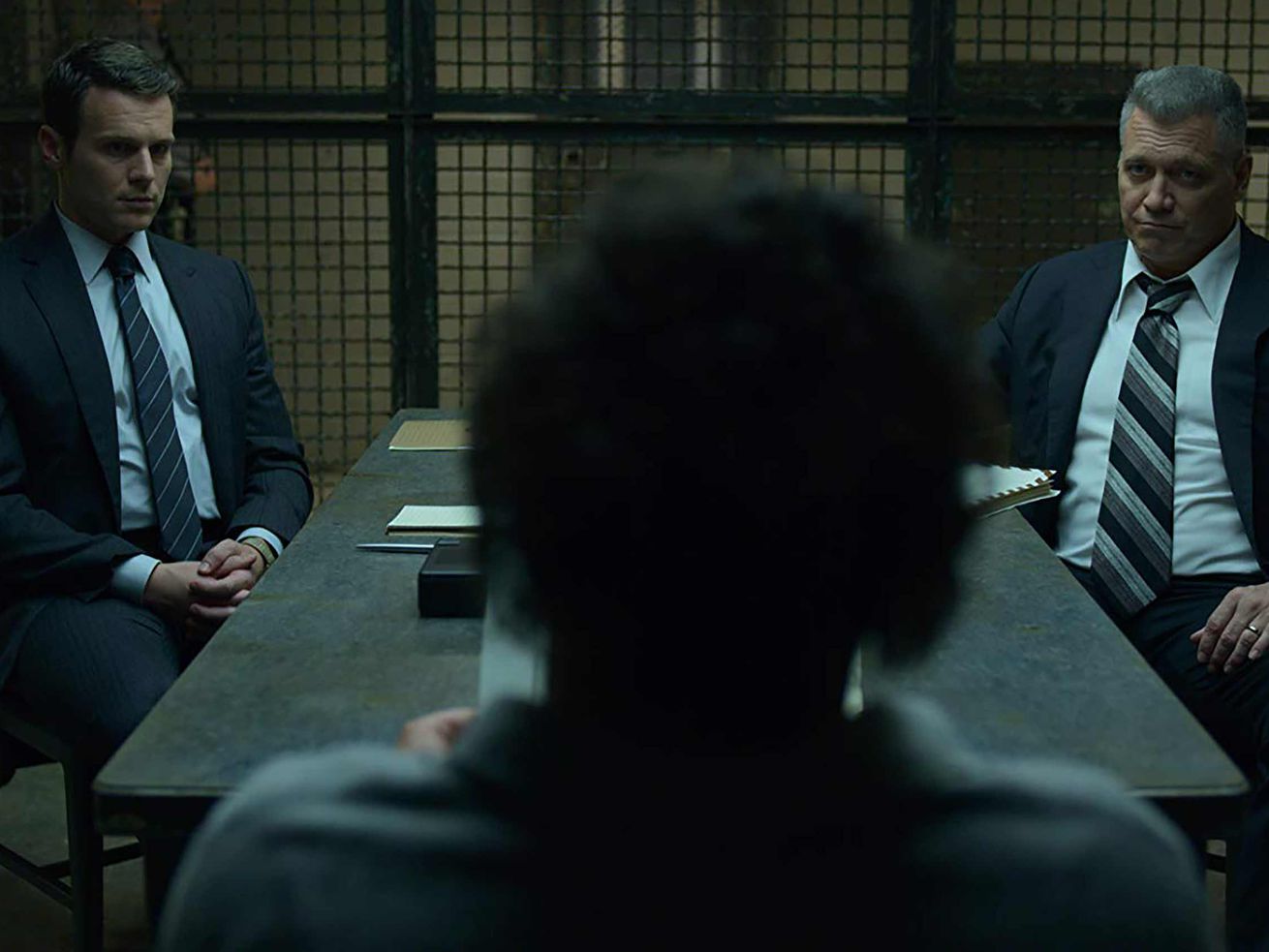 Holden Ford and Bill Tench are hunting minds yet again in season two of Mindhunter. | Netflix

Hint: It’s all the things you don’t see.

The scariest thing in Mindhunter, Netflix’s 1970s-set serial killer drama overseen by the exacting-but-terrific director David Fincher, is always the chalk outline. It’s how you know the murder has already taken place, so you’re not in imminent danger. But it’s also the scar the murder leaves behind, the remains of the remains of the remains. This is a show where the monsters are so often trapped in memory.

There’s something a little idiosyncratic about a serial killer show that never shows serial killing. Yes, it shows us lots and lots of serial killers, but most of them are in prison, and the business of the show is talking to them, trying to get them to reveal their secrets, hoping to get just close enough to see to the bottom of their particular abyss without falling in. Mindhunter never shows us grisly murders themselves — it only shows the aftermath, in the form of those chalk outlines and the occasional crime scene photo.

It’s also a show that replicates reading Wikipedia late at night, because all of the killers featured on it are real, and if you want to, you can Google them and find out even more harrowing details. But that defeats the purpose, because the power of Mindhunter comes from what you don’t know and what you don’t see.

I’m rarely sure if I like Mindhunter more as a thought experiment than as a show. I admire its restraint; I also find myself wondering if it couldn’t do with something a little more visceral than all this chilly, airless chatter. But there are moments when the series’ distancing effect falls away, when its dedication to its icy aesthetic becomes enveloping instead of off-putting.

Take, for instance, a sequence in the second season’s second episode, when FBI Agent Bill Tench (Holt McCallany), assigned to the bureau’s behavioral sciences unit — which is trying to build a database of serial killers’ psychological profiles in order to better understand what drives such people to kill — heads to Wichita, Kansas, to help local law enforcement investigate a serial killer known as BTK. (BTK, who would finally be caught and identified as Dennis Rader in 2005, appears briefly and eerily in quick little flashes to his everyday life as a character known to Mindhunter fans as “ADT Serviceman.”)

A local detective arranges for Tench to meet with Kevin Bright, the only survivor of a BTK attack five years prior. (After BTK shot Kevin, he played dead until he saw an opening to run from the house while BTK killed his sister, Kathryn.) The two cops sit in the front seat of a car. Kevin gets in back. They’re meeting underneath a rumbling train track, in shadowy daylight. It’s ominous, but nobody is in any immediate danger. The local cop keeps a shotgun in the back window, but he swears Kevin would never go for it. After all, a gun nearly took the young man’s life.

Since Kevin was shot in the face (though the bullets evaded major organs), the detective cautions Tench that he doesn’t want to be looked at. So Tench can only stare forward, asking questions about the murder as Kevin grows more and more agitated by his recounting of the murder.

It’s here that the way the scene is filmed becomes important, because it takes a tense sequence and makes it nearly unbearable. Fincher is careful to never show the audience Kevin, because we’re with Tench, the character we already know well, instead of the local cop (who looks back at the boy every so often), who is new to us.

Fincher starts the scene in a profile shot of Tench as he talks with the boy, holding on McCallany, who is one of TV’s great listeners. Fincher can’t stay in that shot without making the scene incredibly boring to look at, but cutting to basically any other shot will reveal Kevin in the back seat, thus giving the audience information Tench won’t have (namely, what Kevin looks like after those gunshots and the resultant reconstructive surgery).

So Fincher very slowly and very deliberately begins to reveal Kevin to us, via shots that allow us to catch glimpses of him, but which never fetishize his suffering or try to make it seem mysterious or creepy. First, we see Tench in a conventional medium close-up that holds in shallow focus, so Kevin, sitting behind him, is blurry and unseeable but obviously present.

Then, slowly, we start to see Kevin in profile, swathed in shadow, then from just outside the car window, where the reflection of sunlight obscures his details. A rumbling train overhead provides a slightly terrifying soundtrack. And just when you think Tench might turn, might finally be tempted to take a look at Kevin, the young man bolts from the car, racing up the nearby stairs to the sunlight above.

Neither Tench nor the audience ever gets to see him.

“What’s in your imagination is scarier than what you see” is an old horror movie concept, but it’s so hard to pull off well

Let’s start with the obvious difficulty in staging a scene so one actor is present but never seen: You have to have a hell of a great actor. And in Andrew Yackel, Fincher has an actor who rises to the challenge of a uniquely difficult sequence, letting the whole scene rise and fall on his increasingly panicked voice.

But I’m also impressed by how Fincher resists showing us what Kevin’s face must look like after being shot. It’s how you’d normally expect a scene like this to end, but the fact that Kevin is allowed to leave the car without being portrayed as a mutilated remainder of his old self struck me as surprisingly kind, for a show about such dark subject matter. We can hear in his voice and the way his story slowly gets more and more unbearable to listen to just how much Kevin has been wrecked by his life’s intersection with a monster. We don’t need visual proof of it.

And what’s more, Tench and the local cop get exactly what they need from the encounter: confirmation that BTK was, indeed, the killer of Kathryn Bright. (Before that, that Kathryn was stabbed, where most of BTK’s victims were strangled, had led some detectives to think the crimes weren’t related, despite the fact that Kathryn was intricately tied up like BTK’s other victims.) There’s no need to dwell on what Kevin looks like now, because doing so wouldn’t service the needs of either Tench’s investigation or the audience. It would just be grim shock value.

And that’s why I keep watching Mindhunter, even when I’m not sure it all comes together. It’s a show about the power of words and stories and memories in a genre that so frequently dwells on violence, sexual and otherwise. And to be sure, Mindhunter has a lot of scenes that take the form of “Can you believe this sick freak?!” that drive me up the wall, but they’re always staged as cool, hushed conversations between psychology experts, which allow me to slowly inch my way back down from the ceiling.

There’s an old adage in horror moviemaking that what you don’t see is often scarier than what you do. The famous example is that the shark in Jaws didn’t work properly, so Steven Spielberg just shot around it. The sight of the shark fin barely poking above the water was so much more alarming than when the beast finally lunged out from beneath the waves.

But finding a way to never show that which is supposed to be scaring us is so, so, so hard, and Mindhunter succeeds at it more often than not, usually by careful shot selection, terrific performances, and expertly calibrated dialogue. This is a show that makes considered directorial choices about the point of a scene, or whose perspective this story is being told from, or what it means to be seeing this particular slice of the story. And even if I don’t always love those choices, I always love that they’re being made.

Take another shot, the one that closes the episode. Bill and his realtor wife, Nancy (Stacey Roca), have just learned that a body was found in a house she just put on the market. We don’t see the body. We don’t even know who died. But just knowing this happened — in the pair’s sleepy little suburb — is enough to induce unease (especially when we know that earlier in the episode, Bill found the couple’s back door swinging open late at night, exactly as the back door in the other home).

The two reflect on how terrifying this is, but they still turn and go to bed. This time, the camera hangs back, as they disappear around the darkened corner of their own hallway. Fleetwood Mac’s unsettlingly brilliant “Tusk” rises on the soundtrack. We’re watching them dispassionately, at a distance, like a clinical observer, maybe, or also maybe like a killer.

Nobody is here right now. There are no maniacs waiting in the shadows. But if there ever are, we, the audience, are right there with them. Trying to understand darkness is necessary work, but it’s also work that pulls you out of the light and back into the shadows.

Mindhunter is streaming on Netflix.