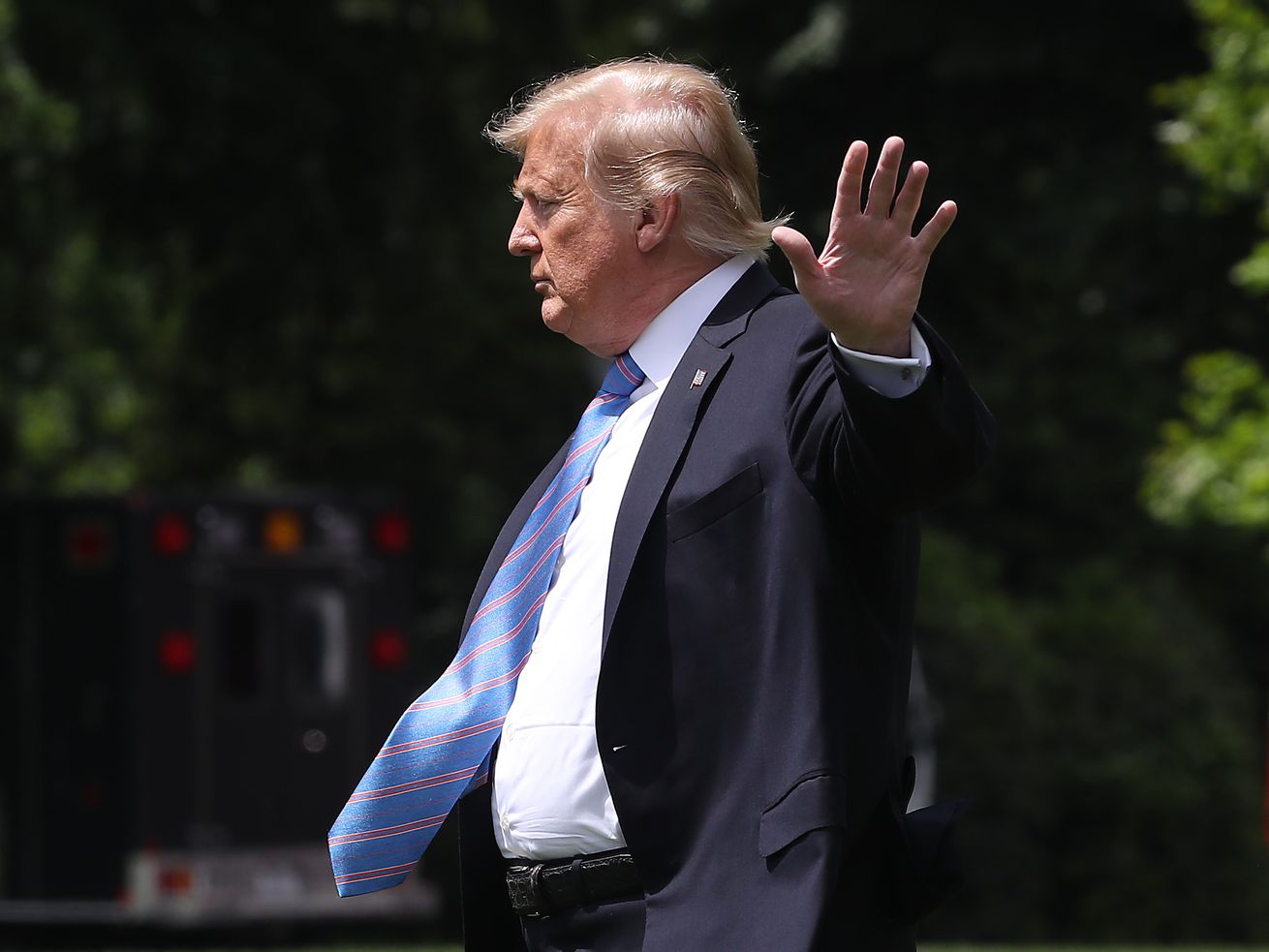 Multiple countries and companies are signing the “Christchurch call.” The US isn’t among them.

More than a dozen countries, including France, Germany, and the UK — plus tech giants such as Amazon, Facebook, and Google — have signed on to an international call to fight online extremism. But the United States, under the directive of President Donald Trump, is holding out.

On Wednesday, New Zealand Prime Minister Jacinda Ardern and French President Emmanuel Macron unveiled the “Christchurch call,” a push to combat online extremism in the wake of the March 15 mass shooting in two mosques in New Zealand that left 51 people dead. Billed as a commitment by governments and tech companies to “eliminate terrorist and violent extremist content online,” the call expresses clear support for freedom of expression while acknowledging that the darkest and most dangerous corners of the internet need to be addressed.

Facebook, which is one of several companies backing the call, on Tuesday announced changes to its practices surrounding Facebook Live and how it deals with content violations. The company said that people who break certain rules, such as sharing a link to terrorist content or violating Facebook’s “dangerous” individuals and organization policies,” will immediately have their Live access revoked when a violation is identified. It will apply this new “one strike” policy starting immediately and also put $7.5 million toward research projects on manipulated media.

The Facebook announcement was also driven by the Christchurch attack, during which the shooter livestreamed the incident on its platform. Facebook in a statement on its Tuesday announcement said it hopes its efforts will “help us to more effectively fight organized bad actors who try to outwit our systems as we saw happen after the Christchurch attack.”

As many governments and private sector heavyweights have joined in on this mobilization around Christchurch, there is one notable holdout: the United States. The Trump administration hasn’t sign the Christchurch call and reportedly doesn’t plan to. The White House said in a statement to the Washington Post that the US continues to be “proactive in our efforts to counter terrorist content online” but is worried the call goes beyond the limits of the First Amendment.

The Christchurch call, unveiled on Wednesday, is basically a voluntary commitment from countries and companies to do better when it comes to addressing dangerous and violent content online. Here’s part of it that basically boils it down:

The Call outlines collective, voluntary commitments from Governments and online service providers intended to address the issue of terrorist and violent extremist content online and to prevent the abuse of the internet as occurred in and after the Christchurch attacks.

All action on this issue must be consistent with principles of a free, open and secure internet, without compromising human rights and fundamental freedoms, including freedom of expression. It must also recognize the internet’s ability to act as a force for good, including by promoting innovation and economic development and fostering inclusive societies.

For governments, the call outlines actions such as enforcing applicable laws on the production and dissemination of extremist content, supporting industry standards that ensure reporting on terrorist attacks does not amplify them, and considering “appropriate action to prevent the use of online services to disseminate terrorist and violent extremist content.” It mentions support for policy and regulatory measures that are “consistent with free, open, and secure internet,” but doesn’t get into specifics.

For internet companies, the call discusses commitment to transparency and enforcement of community standards and reviews of algorithms that push users to extremist content. Signatory governments and companies also make commitments to work together, including supporting academic research, ensuring cooperation with law enforcement, and developing interventions to redirect users away from violent and extremist content.

So what does the White House object to? It’s not entirely clear.

A spokesperson told the Post that it’s about concerns the document runs afoul of free speech principles and the First Amendment.

”We continue to be proactive in our efforts to counter terrorist content online while also continuing to respect freedom of expression and freedom of the press,” the White House told the Post. “Further, we maintain that the best tool to defeat terrorist speech is productive speech, and thus we emphasize the importance of promoting credible, alternative narratives as the primary means by which we can defeat terrorist messaging.”

A White House spokesman did not return Recode’s request for comment on what, specifically, in the call the administration objects to along First Amendment lines.

The Christchurch shooter was a 28-year-old Australian white nationalist and right-wing extremist. After the shooting, President Trump expressed condolences but said he didn’t think white nationalism was a growing problem in the US and around the world, despite mounting evidence to the contrary. “I think it’s a small group of people that have very, very serious problems,” he said.

The US insists on being an outlier on guns

Facebook’s “first strike” announcement is well-timed and likely, at least in part, an effort to earn some brownie points with the public. But it’s still positive step — and one the US government refuses to take.

Australia, Canada, the European Commission, France, Germany, Indonesia, India, Ireland, Italy, Japan, Jordan, the Netherlands, New Zealand, Norway, Senegal, Spain, Sweden, and the UK all signed on to the Christchurch call. So did Amazon, Facebook, Google, Microsoft, Twitter, and YouTube. And yet, the White House says no.

Prime Minister Ardern, who along with Macron organized the call and a related summit on extremism, on Tuesday expressed dismay over the Trump administration’s obstinance, though not directly related to this new document but rather its response to gun violence overall.

”Australia experienced a massacre and changed their laws. New Zealand had its experience and changed its laws. To be honest, I do not understand the United States,” she said in an interview with CNN.

New Zealand lawmakers voted to ban most semiautomatic weapons and assault rifles there less than a month after the Christchurch shooting. Australia imposed major restrictions on guns there after a massacre in 1996.

The United States, however, seems to be stuck in an unending loop: a mass shooting happens, there are calls to change gun laws, but the news cycle eventually moves on, and then it repeats again. The cycle was broken somewhat after the Parkland, Florida, high school shooting in 2018, but at the federal level in the US there still has been very little movement.

Online extremism is a major problem. This seems like an easy step for the White House to take.

The rise of online extremism and violence is a major issue all over the globe, and there’s no clear solution for combating it.

As Amanda Sakuma recently explained for Vox, the Christchurch shooter exploited the internet to get his message out and laid bare the shortcomings of our abilities to police such awful content:

The suspected gunman did everything he could to make his shooting spree go viral. He live-streamed the attack on social media, wearing a body camera to simulate a video game. He shared a rambling 74-page manifesto espousing white supremacy that was full of memes and easter eggs meant to invite attention from all corners of the internet and admiration from other extremists who live online. The shooter had laid a trap across the internet that exploited the newsworthiness of the attack and leaned into peoples’ inclination to gawk at horror and violence. Even professional journalistic institutions gave in to the temptation to air video of the massacre.

Scrubbing the video from the internet was like playing a game of whack-a-mole. Facebook quickly removed the alleged gunman’s Facebook and Instagram accounts — but not because its algorithm or moderators had flagged the violent content in real time. New Zealand authorities had to ask for the video to be taken down. Internet service providers in New Zealand rushed to “close off” websites that were distributing the video, but then a number of copy-cat sites immediately started popping up.

Free speech is an important tenet of American society, and the First Amendment strictly prohibits the government from infringing on speech, no matter how hateful it may be. But it doesn’t prevent lawmakers and regulators from talking about hateful and dangerous content online and trying to figure out what to do about it. Moreover, private companies can legally restrict what speech they do and don’t allow on their platforms.

The US has long been an international outlier on guns, and under Trump, it has become so in other arenas, such as climate change. Now, the White House appears determined to stay out of yet another conversation, also with dire consequences.