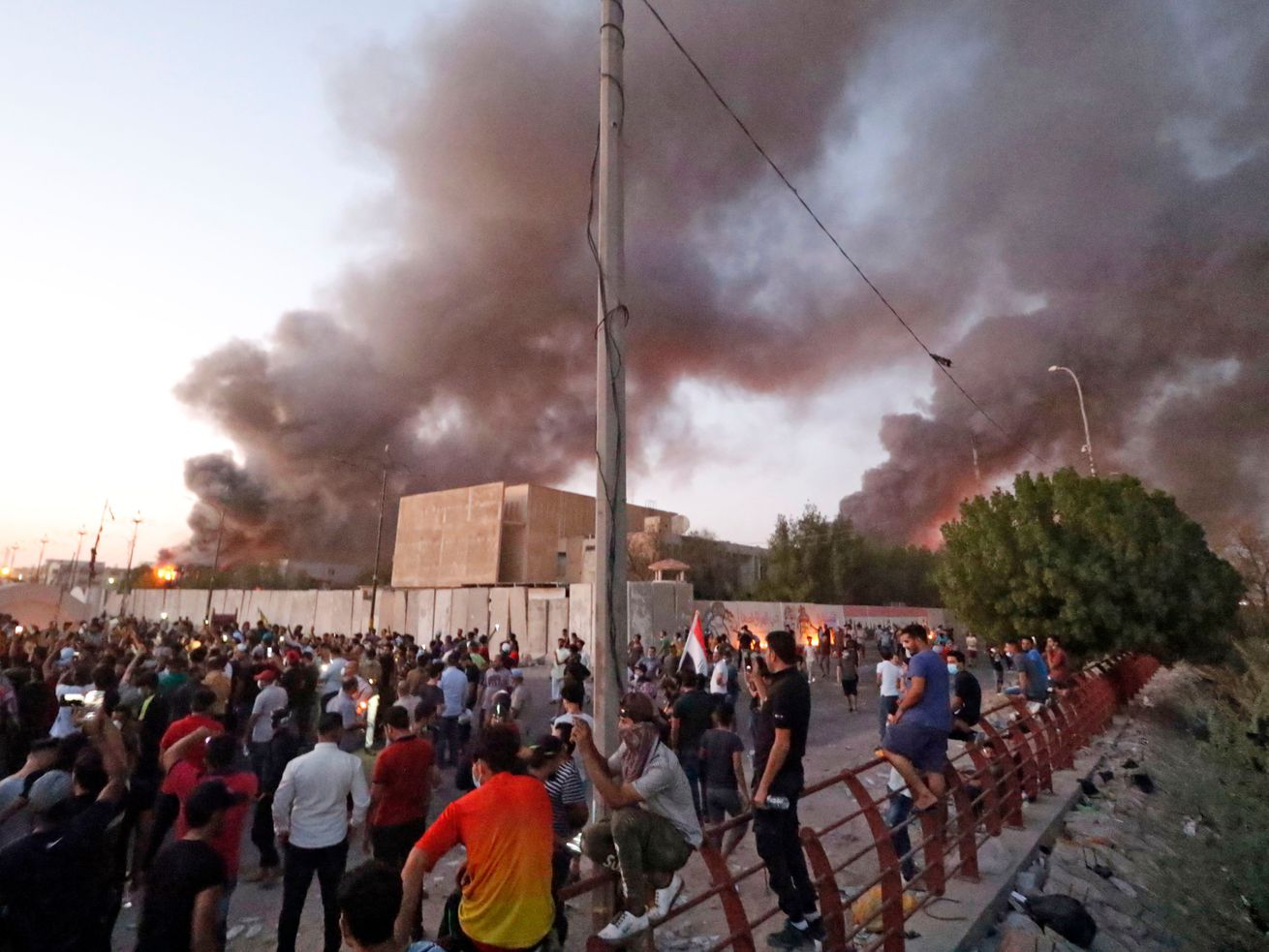 Protesters in Basra, Iraq, have torched nearly every government building in the city — and Iran’s consulate — in the last 24 hours.

Iraq is burning again — and the unrest could plunge the country once more into full-blown chaos.

In the last 24 hours, protesters in the southern Iraqi city of Basra have attacked or set fire to nearly every government building — including the headquarters of the ruling Da’wa Party and the offices of the state-run Iraqiya TV station — as well as the Iranian consulate and the headquarters of almost every Iranian-backed militia in the city.

And on Friday evening, according to local reports, protesters had gathered outside the US consulate in an attempt to storm the building, and Iraqi security forces had been deployed to keep them away (the consulate was closed at the time).

The protesters are outraged over the lack of basic services in the city. Basra has been suffering from a crippling electricity shortage for months — in a place where summer temperatures regularly reach above 120 degrees Fahrenheit during the day.

Compounding that is a water pollution crisis that has sickened thousands of residents of Basra province in the last few weeks — including 7,000 cases that occurred over just two days in late August. According to the Iraqi Observatory for Human Rights, hospitals were so overwhelmed that some patients were left lying on the floor untreated.

But while those may be the most immediate causes of the unrest, experts say the demonstrations are about a lot more than just water and electricity: Protesters are also lashing out at the rampant government corruption and Iranian meddling they believe have contributed to the dire economic situation in the oil-rich city.

Iraqi security forces have imposed curfews but have so far been unable to contain the spread of the rioting. At least 12 demonstrators have been killed and dozens injured, mostly in clashes with security forces, since the protests began five days ago, further adding fuel to the protesters’ fire.

The crisis is also threatening to sink the country back into the kind of chaos in which terrorist groups like ISIS thrive. Here’s what’s going on.

Water, water everywhere but not a drop to drink

Seated near the mouth of the Tigris and Euphrates rivers and crisscrossed by a network of waterways that once earned it the nickname “the Venice of the East,” Basra should be a lush, flourishing paradise with abundant access to fresh water.

But for months, Basra residents have turned on their water taps to find cloudy, brownish-yellow water flowing out that is too salty and polluted to be used for washing clothes.

What locals in Basra had coming through their public water service this morning , Tanoma district, Basra, southern Iraq. One of the richest oil cities in the world lacks fresh water. pic.twitter.com/xxApgoPP9f

One YouTube video from Basra showed thick black sludge gushing out of a garden hose:

Basra’s once-pristine freshwater canals are clogged with garbage and sewage. A combination of a lack of rainfall and the construction of upstream dams in Turkey, Syria, and Iran, in addition to poor water management by the government, has allowed salt water from the Persian Gulf to leak in, destroying farmland and killing fish and livestock.

Official Iraqi government statistics put the chemical contamination of Basra’s water at 100 percent, and the bacterial pollution at 50 percent.

Iraqi health officials estimate that over 17,000 residents of Basra province have been poisoned by the polluted drinking water in recent weeks — including 7,000 cases that occurred over just two days in late August.

This all comes amid an ongoing electricity shortage and a broader economic crisis. The oil-rich port city is home to 70 percent of the country’s oil reserves, yet 50 percent of its residents live below the poverty line. Unemployment is high, particularly among young people.

And government corruption and incompetence are mostly to blame.

Government ministries in Iraq are controlled by the various political parties in parliament, and they’re assigned based on the number of seats each party holds.

As a result, the parties treat the ministries they control as their own personal sources of profit, awarding powerful jobs and lucrative contracts to their political cronies — instead of to qualified technocrats who actually know what they’re doing.

This, perhaps not surprisingly, isn’t exactly the best way to create competent government ministries that can deliver services effectively.

For instance, AFP reports that a “substantial slice of the estimated $40 billion allocated to the [country’s] power sector over the past 15 years has vanished. Money from public tenders has allegedly lined the pockets of corrupt politicians and businessmen who fronted fake contracts.”

And that’s just one sector. Now imagine that level of dysfunction spread across the entire government bureaucracy and you’ll begin to understand why providing even basic services like electricity and water can be difficult if not impossible.

On top of that, Basra and the rest of southern Iraq have historically been ignored underdeveloped by the government.

“Basra has been on the receiving end of a ton of bad government mismanagement, at pretty much every level,” Phillip Smyth, a senior fellow at the Washington Institute for Near East Policy, told me.

Now it seems the people of Basra have had enough. And they’re making their frustration known to just about everyone they can find.

“Protesters are basically taking a shotgun approach: We’re angry, screw it all, we’re going after everyone.”

Experts say the protests are also about the deeper, systemic issues in Iraq: corruption, Iranian influence, and the political and security challenges facing the country now that the main coordinated military effort against ISIS has mostly ended.

Many people in Basra blame Iran for supporting corrupt Iraqi officials and the Shia militias headquartered in the city, which are thriving while the majority of the people continue to struggle with poverty and unemployment.

And people are getting tired of Iran’s meddling.

On Friday, protesters stormed Iran’s consulate in Basra, tearing down the Iranian flag and putting up an Iraqi flag in its place. They also burned Iranian flags and pictures of Iran’s Supreme Leader Ayatollah Ali Khamenei in the streets, while chanting “Iran out, out!”

Protesters have also torched the headquarters of nearly every Iran-backed Shia militia group in the city, including Asa’ib Ahl al-Haq, the Badr Organization, Kata’ib al-Imam Ali, and others.

“If anyone needs more proof that Iran isn’t always everyone’s favorite neighbor, here you have it,” Rasha Al Aqeedi, a fellow at the Foreign Policy Research Institute who specializes in Iraqi politics, wrote on Twitter. “Nonetheless this is a serious escalation with dire consequences.”

But it’s not just Iran. It’s just one target among many.

Protesters are targeting pretty much every government office, bureaucrat, political party, and armed group in the city that wields any power and influence.

They blocked the entrance to Umm Qasr, the country’s main sea port to the south of Basra, effectively shutting it down for several hours. Others stormed a water treatment plant connected to an oilfield about 40 miles northwest of Basra and briefly took two employees hostage, releasing them and leaving peacefully after about an hour.

“Protesters are basically taking a shotgun approach: We’re angry, screw it all, we’re going after everyone,” Smyth says.

The unrest could plunge the country into chaos

As bad as things are right now, they could get much, much worse.

Thanks to the years-long fight to kick ISIS out of the country, many people in Basra — particularly young men — have access to heavy weapons, and have experience fighting in a brutal conflict.

And many of these same young men are now unemployed and pissed off.

And influential political and religious leaders are already using the unrest to push their own agendas forward and score points against their political rivals, stirring things up even further.

Ayatollah Ali Sistani, Iraq’s most prominent Shia cleric, blamed political leaders in Baghdad for the situation, and called for a new government to be formed.

“The suffering of the citizens in Basra and the provinces is a natural result of the performance of senior officials in successive governments of quotas, and this tragic reality can not change if the government was formed on the same basis and standards,” Sistani said Friday.

Muqtada al-Sadr on Thursday called for an emergency session in parliament to discuss the situation. In a televised speech, he called on Iraqi Prime Minister Haider al-Abadi and other officials to either attend the session or resign. (A session is now planned for Saturday.)

Abadi’s Da’wa Party has dominated Iraqi politics since the 2003 US-led invasion that toppled longtime dictator Saddam Hussein. But in the country’s national elections in May, Sadr’s political coalition won the most seats. He is currently trying to form a new government with Abadi, but the messy process of working out the details is still going on.

Sadr also tweeted at Abadi, saying, “I hope you don’t think that the Basra revolutionaries are just a bubble … quickly release Basra’s money and give it to clean hands to start at once with immediate and future development projects. And beware of complacency and negligence,” according to CNN.

Back in July, after a similar (though less destructive) spate of protests broke out, Abadi announced that he would release $3 billion in emergency funds to develop infrastructure, restore water, electricity, and health services, and create jobs in Basra. Yet the money has yet to materialize as the negotiations to form a new government continue to drag on.

In a press conference Tuesday, before most of the rioting had begun, Abadi ordered an investigation into violence against demonstrators and once again promised to address the water pollution crisis — without offering any actual specifics about how he plans to go about doing that.

But he also sent additional troops and reinforcements into Basra. Which means there’s a high likelihood of further clashes.

If the unrest spreads or escalates, it could create the same kind of turmoil and lawlessness that armed groups like ISIS and others are really good at exploiting to make a comeback. And that would be bad news for everyone, not just Iraqis.

For now, the protests and riots haven’t reached that level, and it’s still possible that they will eventually fizzle out the same way earlier iterations of these protests have. But the situation is tense — and until the government solves the underlying issues of corruption and mismanagement that are plaguing the city, the potential for explosive uprisings will remain.

When Vox asked the consul general for the US consulate in Basra, Timmy Davis, for comment on the situation Friday night, he simply emailed back: “It’s midnight here and no one will be sleeping anytime soon.”