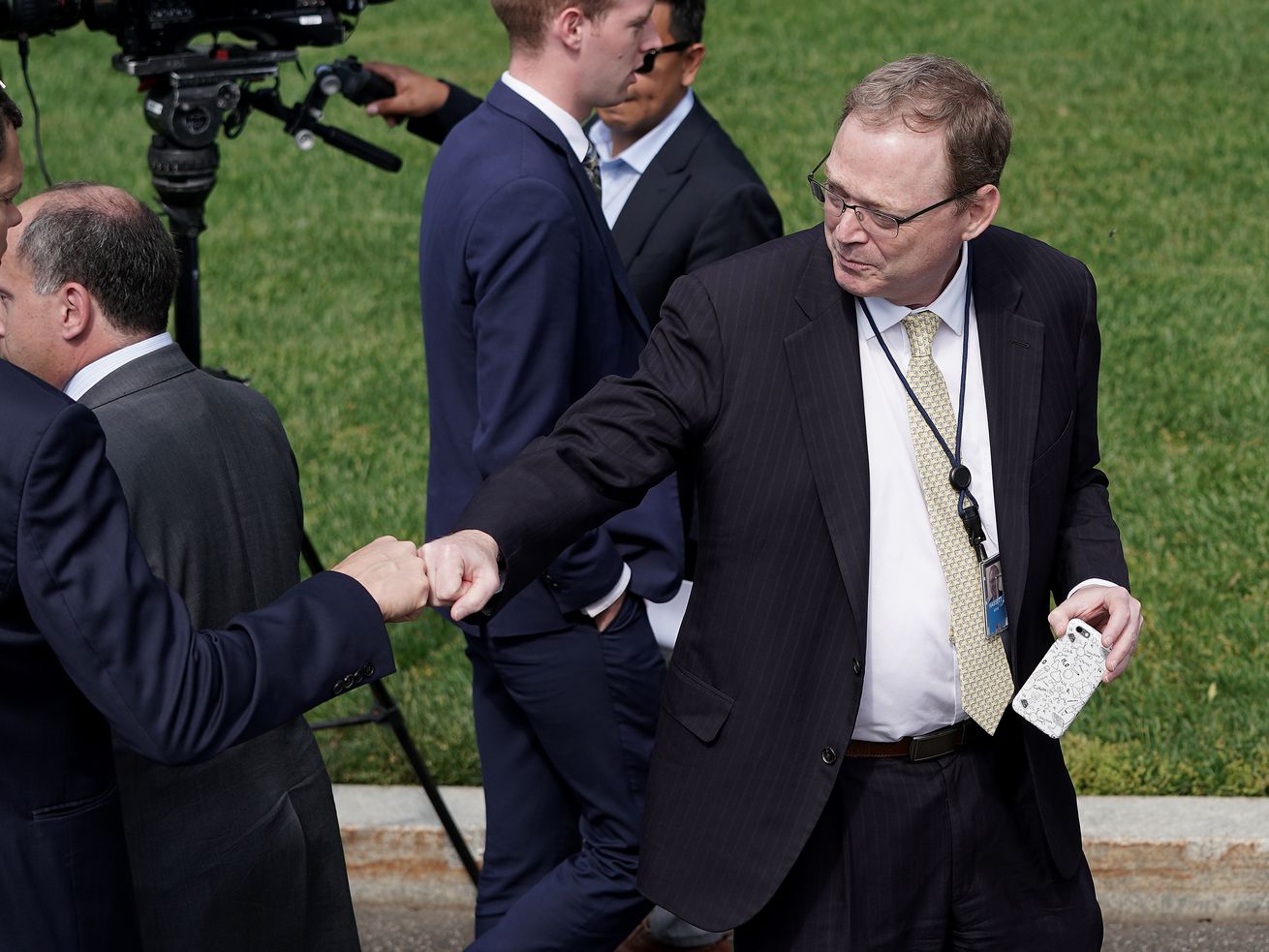 Chairman of the Council of Economic Advisers Kevin Hassett with reporters outside the White House on May 3, 2019. | Chip Somodevilla/Getty Images

An extremely foolish way to forecast the pandemic.

The Trump administration’s decision to abandon efforts to suppress the coronavirus and even sideline its own task force’s guidelines in favor of a quick lift of restrictions on economic activity naturally prompted the question: why?

After all, models from both the Centers for Disease Control and Prevention and the Institute for Health Metrics and Evaluation that the White House had previously relied on for guidance say that moving to reopen now will likely lead to a substantial increase in the death toll.

The answer, according to a May 4 Washington Post report by William Wan, Lenny Bernstein, Laurie McGinley, and Josh Dawsey, is that the president prefers a different model, which paints a rosier picture. Referred to in the original Post report as the “cubic model,” it was attributed to former Council of Economic Advisers Chair Kevin Hassett, and the Post reported that “people with knowledge of that model say it shows deaths dropping precipitously in May — and essentially going to zero by May 15.”

This report and follow-up reporting and controversies unleashed a cavalcade of online snark and jokes, but the core revelation is deadly serious: There simply is no theoretical or empirical basis for the belief that restrictions can be broadly lifted in May 2020 without a significant increase in loss of life.

Depending on whom you ask, the “cubic model” is either risible nonsense or not a forecast at all (or both). And while it’s hardly unheard of for political decision-makers to embark on a course of action that contradicts expert advice, an unusual hallmark of the way Trump conducts his administration is the way he often demands reasonably well-qualified people to humiliate themselves on his behalf.

Nate Silver, a professional builder of quantitative models, immediately (and, as it turns out, presciently) guessed/joked that the story of Hassett’s model was that he plugged some numbers into an Excel file and then had the computer draw lines until he got an optimistic forecast.

I would bet $538 that the White House’s “cubic model” is literally just an MS-EXCEL trendline with a third-degree (cubic) polynomial. https://t.co/TvrHm25dB6

My level of competency with quantitative analysis is exactly high enough that I can do this kind of “modeling” and understand why it’s a bad idea, but not high enough to make a good model of anything. To understand what happened here and why it’s absurd just takes a little explanation of Excel functions, and you need to look at some charts.

To start, you download the US daily death data from the Covid Tracking Project and put it into Excel, where you can make a scatterplot of deaths by day.

One built-in Excel function lets you add a trend line to a scatterplot to see whether on the whole your data series is going up or down.

The way this works is that the computer, being good at math and without knowing anything about your data, calculates a line that minimizes the average distance between the lines and the points. It looks like this.

You can also, if you want, tell Excel to project this line into the future and you get this chart:

That gives you a “what if this trend continues into the future at its current rate of growth” hypothetical scenario to explore. The mere fact that you can draw a straight line like this is not a forecast or a reason to believe that the linear trend will continue. By monkeying around in Excel, for example, you can reach the conclusion that if we continue on this linear growth path, more than 10,000 Americans will be dying per day by Election Day 2020. That’s not a prediction, but it is a confirmation that a purely self-interested president should try to do something to alter the trajectory of the death toll.

But you also don’t need to draw a straight line. There is theoretical reason to believe that infectious disease outbreaks exhibit an exponential growth pattern, for example, so it might be better to have Excel draw a best-fit curve that features a parabola rather than a straight line.

This chart shows both the best linear fit and the best parabolic fit, and they look extremely similar.

That turns out to be an example where messing around in Excel (“exploratory data visualization” is the fancy term for it) actually tells you something informative about the data. The death toll is not currently exhibiting the kind of strong exponential growth the country saw between March 20 and April 10. That’s good news, and we actually learned something from drawing these lines. A real social scientist would make fun of me for doing this in Excel rather than using more professional-grade software like Stata or R, but it’s close enough.

The problem is that while the similarity between the linear and parabolic curves tells us the good news that the growth no longer appears to be exponential, it doesn’t tell us that it’s safe to stop worrying about public health.

Fortunately, modern computers are powerful, and Excel can draw all kinds of lines. For example, what if instead of a quadratic function, I asked it to draw a cubic function — in other words, a function where X^3 shows up in the math?

Why would a virus exhibit a cubic growth pattern? I have no idea. But it turns out that if you draw a cubic best-fit curve through the data, you see deaths dropping to zero in mid-May. Great news!

Now, I am not a virologist or a math wizard, but it’s obvious looking at this chart that one property of cubic functions is that after peaking they decline rapidly to less than zero. And we know that this is not how coronavirus or any other virus works.

You can draw lines through any kind of data, but to make models that provide meaningful information, your modeling choices need to make some kind of sense. It is not at all obvious to me what the best way to model the future course of the pandemic is, but it’s clearly not to use this cubic function. As far as I can tell, the only appeal of doing it that way is it happens to provide an optimistic forecast, though naturally the relevant players have angrily denied this is the case

Hassett says he was just “smoothing” the data

While economics Twitter was having a field day with this cubic model idea, the Council on Economic Advisers’ Twitter account was arguing that “curve fitting can improve data visualization” and that IHME forecasts have been fairly reliable.

Hassett himself explained this in a similar way to the New York Times’s Jim Tankersley, who reported that “deaths vary by the day, particularly on weekends. To smooth out the volatility, Mr. Hassett said he had employed ‘just a canned function in Excel, a cubic polynomial.’”

Last but by no means least, if what you want to do is smooth out noisy data to eliminate day-of-the-week effects, Excel has a handy function that will generate a seven-day moving average. It looks like this:

There’s just no plausible way to cut the data that says the epidemic is on the verge of tapering off in a week or two. What’s more, while the Hassett “model” is certainly more optimistic than its rivals, if you think about it for 10 minutes, you’ll see that it doesn’t support the president’s policy approach anyway.

Trump doesn’t want to own the implications of his choices

We are facing a classic bad political situation where the president has decided what policy he wants to adopt, but has also decided he doesn’t want to explicitly choose a course of action that could get tons of people killed, so he’s tuning out expert analysis.

The White House has, for example, shelved the official CDC guidelines for safely lifting restrictions. That’s because those guidelines say it is only safe for a handful of states to lift restrictions, but Trump’s policy is that they all should.

There is a case to be made for a decision to reopen, but it involves more people getting infected and more people dying. Consequently, Trump has taken to musing about how increasing testing levels might be a mistake because it makes the country “look bad,” while Axios reports that he is on the verge of beginning to publicly claim the official death counts are overstated.

The “cubic model” is of a piece with these tactics, a hope that the basic realities can be wished away or obscured — just where we started when Trump was promising the United States would soon go from 15 cases down to zero and hesitating to allow Covid-19 patients off a cruise ship because it would make the numbers look worse.

After all, if it were genuinely true that death numbers were about to begin plunging and new fatalities would be all but eliminated by mid-May, it would make very little sense to lift restrictions this week. The US could just wait 10 days, achieve total victory, and then open up under uncontroversial circumstances.