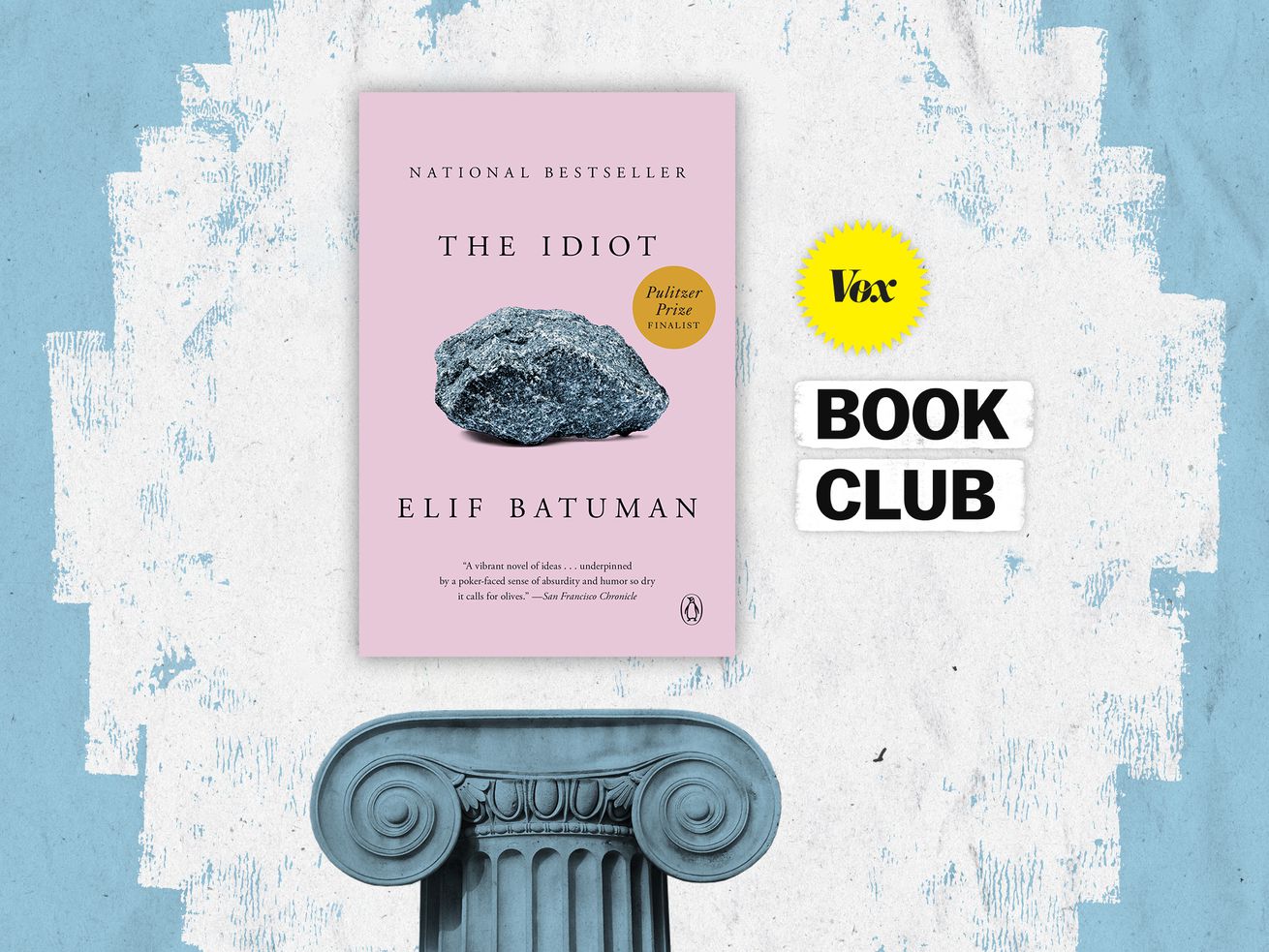 The Idiot is playing some very complex language games. The Vox Book Club breaks it down.

The Vox Book Club is linking to Bookshop.org to support local and independent booksellers.

Elif Batuman’s The Idiot, the Vox Book Club’s September pick, is a story about first love and first disillusionment with love. But the love affair that the book is most deeply concerned with isn’t our protagonist Selin’s flirtation with Ivan, a withholding fellow college student who already has a girlfriend. It’s her relationship with language.

Selin is an 18-year-old Harvard freshman in 1996, and she keeps signing up for classes that will help her think about words. “I like words,” she tells a professor during a screening interview for a seminar on academic writing. “They don’t bore me at all.” The professor won’t let her into the class.

Every time Selin turns to the academy to help her understand language, she finds herself trapped, undermined, rejected. Her English classes keep forcing her to talk about a book’s historical context instead of focusing on the words and the characters’ motivations as she would like to. Her philosophy of language class is all tangled up in trying to explain English sentences to Martians with elaborate use of logical notations.

And in her linguistics class, Selin learns about the Sapir-Whorf hypothesis, which argues that the language you speak influences how you process reality. She also learns immediately that this theory is “not just incorrect but hateful, like saying that different races had different IQs” — and yet, “in my heart, I knew that Whorf was right,” that language does change the way you think.

Selin believes in Whorf because she’s bilingual, and she knows that when she thinks in Turkish, her parents’ native language, she thinks differently than she does in English. Turkish has an inferential tense marked by the suffix –miş, which you have to add to verbs whenever you are talking about something you did not personally see or something that you doubt. What that means, Selin tells us, is that “you were always stating your degree of subjectivity. You were always thinking about it, every time you opened your mouth.”

That subjectivity tortures Selin. She wants language to mean something very clear and straightforward, something beyond ambiguity: When someone asks you to stop for a drink, Selin thinks, that should mean one drink, singular. But she keeps tripping over all these instances where words and meaning don’t quite line up. As Batuman put it to the Rumpus in 2017, “Language is all convention, and that’s something that Selin doesn’t understand; she wants it to be direct.”

It’s time for some semiotic theory

In semiotics, a word is called a signifier, and what it means or describes is the signified. The two of them together form a sign. The classic explanation for how that works goes like this.

The tree is the signified.

Now picture the word: tree. The word tree is the signifier.

An actual tree is a thing in and of itself. It is only connected to the collection of shapes and sounds that make up the word tree because we have all agreed that it is. But we seem to need that collection of shapes and sounds, the word tree, in order to have complex thoughts and ideas about the tree itself. That’s why we have signs — those combinations of signifier and signified. So the question semiotics asks is, how do the signifier and the signified join together to create the sign?

Words and their meanings aren’t the only signs that exist. A sign is anything that produces meaning outside of the signifier itself, any form of communication where one thing — a word or symbol or gesture or behavior — means something more than itself. The Einstein poster Hannah wants Selin to buy for their dorm room to demonstrate a sense of whimsy and playfulness is a sign, and when Selin buys a different poster that instead makes it look like she’s a big Einstein fan, she’s getting the sign wrong. She’s trapped in the gap between signifier and signified, and that vast and enormous space tortures her.

And even when Selin understands what a sign means, she’s always aware of that signified/signifier gap. When she buys chocolates as a gift for her Hungarian host family, she has to consciously remember to pretend to be unable to resist chocolate, because liking chocolate is a sign of normalcy, and Selin wants to be considered normal and likable. But she knows she’s pretending, that she actually will have no problem at all saving the chocolate for her host. She knows that the signifier has an arbitrary relationship with the signified.

Selin forms her closest relationships with other bicultural students. But that doesn’t mean they understand her semiotic questions.

As Lili Loofbourow wrote for the Week in 2017, part of the reason Selin has problems with cultural tropes — with the semiotics of cosmopolitan American college students — is that she’s bicultural. Selin’s semiotic confusion stems from what Loofbourow writes is “a bicultural upbringing that, by exposing you to multiple sets of social norms, immunizes you to their universality. It’s a form of wordliness that makes you less certain.” Selin can’t pretend that she knows what a poster of Einstein means to every American college student because she knows the same poster means something different in Turkey. She knows that a signified can have multiple signifiers, which means she can’t pretend that the signified and the signifier are just self-evidently the same thing.

It’s perhaps for this reason that Selin is drawn to other bicultural students. She forms her closest friendship with Svetlana, who “sounded really different when she spoke Serbo-Croatian,” and she pursues Ivan, who speaks Hungarian and who also speaks the language of pure mathematics. But Selin and Ivan’s relationship turns out to be fraught precisely because of the math thing.

Selin is at first excited by math when she has the idea that it’s a language of pure signs, where there is no space at all between signifier and signified because they’re the same thing. But math, too, turns out to be a dead end on her quest to understand language: Everything is so abstracted away from the rest of the world that it becomes meaningless to her.

For Ivan, though, the idea of pure math or pure language is exciting. Ivan follows Derrida, who argued that the only part of reality we can ever truly access is the signifier. (I apologize for the vast oversimplification of Derridean theory that’s about to follow, but we only have so much space here.) For Derrida, it’s not just that there’s a space between signifier and signified, like Selin thinks: It’s that the signifier is unreachable. Moreover, Derrida argues, since all we have access to is the signifier, for all intents and purposes, the signified does not really exist. It’s just not there.

That’s why Ivan tells Selin that his love for her is “for the person writing your letters.” He has feelings for the letters, for the signifiers of Selin, but he doesn’t think he can actually access Selin herself. As far as he’s concerned, that means she doesn’t really exist — which means it’s fine for him to string her along even though he has a girlfriend and never actually try to kiss her.

For Selin, that’s nonsense. She obviously exists, whatever semiotic theory says, and she’s obviously the one writing the emails that Ivan’s so into, so what’s his problem? “I don’t understand why it will trivialize these letters to say hi, or to actually talk to each other,” she tells him. But they’re working with two different ideas about how language functions, so when they finally force themselves to sit down and have a straightforward conversation, it’s an incredibly painful process.

So when Selin concludes her school year and determines that all her courses on the philosophy and psychology of language have “let me down,” and that “I hadn’t learned what I had wanted to about how language worked. I hadn’t learned anything at all,” there’s still a sense that she gained something valuable and constructive from her experience. She now has Svetlana and the friendship they built together.

Here’s a series of questions to start a conversation about The Idiot. You can use them as a guide for conversation in the comments section, or in your own community, or start off with your own questions.

Sound off in the comments below, or wherever you’d like to talk, and meet us back here in two weeks on September 25 for our next discussion post. After that, on September 30 we’ll have our live discussion event with Elif Batuman herself, and you can RSVP here. And to make sure you don’t miss anything in the meantime, sign up for our newsletter!