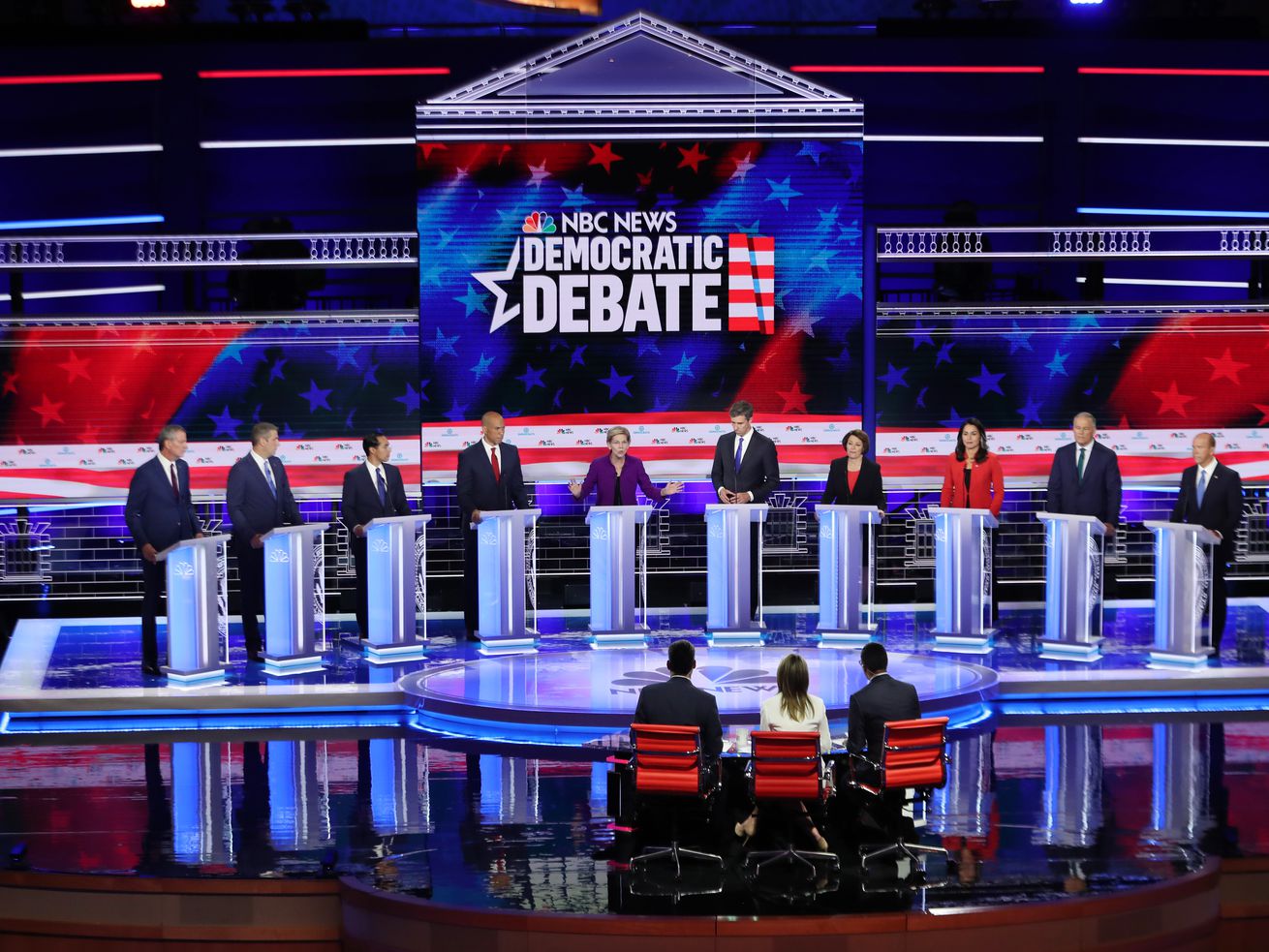 They include the Iran deal and a heated exchange on Afghanistan between two lesser-known candidates.

Foreign policy debates are beginning to split the 2020 Democratic field — though it was a bit hard to tell on Wednesday night with a crowded stage and plenty of topics to cover.

But there were a few notable moments in which the candidates directly engaged with the types of national security and diplomatic decisions they’ll have to deal with if elected president, from Iran to the war in Afghanistan to some of the biggest geopolitical threats America faces.

Here are the top foreign policy highlights from the first Democratic debate.

The US is engaged in a months-long standoff with Iran, which escalated last week after Tehran shot down a US military drone and the Trump administration pulled back from launching an airstrike in retaliation.

During Wednesday’s Democratic debate, moderator Lester Holt asked the 10 candidates onstage whether they’d rejoin the 2015 nuclear deal, which President Donald Trump pulled the US out of in May 2018. (The rest of the signatories — Iran, European powers, Russia, and China — stayed in the deal.)

All candidates said they’d rejoin, except Sen. Cory Booker (D-NJ). “We need to get into a deal, but I’m not going to have a platform to say I’m going to rejoin the deal,” Booker explained. “When I’m president of the United States, I will do the best I can to secure the country and the region and if I have an opportunity to leverage a better deal, I’m going to do it.”

Booker’s comments — that he would basically try to negotiate a better deal — prompted other Democrats to say they’d also try to improve the agreement, including Sen. Amy Klobuchar (D-MN) and Rep. Tulsi Gabbard (D-HI).

As my colleague Alex Ward pointed out, this was a pretty surprising development, as many progressives see the current US-Iran tensions as a direct result of President Trump’s decision to scrap the deal.

But Iran’s bad behavior of late, and frontrunner Joe Biden’s ties to the Obama-era deal, may have pushed the candidates to take a more aggressive stance.

Moderator Rachel Maddow brought up the two US soldiers who were recently killed in Afghanistan and asked Rep. Tim Ryan (D-OH): Why isn’t that war over, and why can’t presidents of different parties figure out how to get out?

Ryan responded that the US “must be engaged” and then tried to pivot back to domestic issues, saying, “If we are getting drones shot down for $130 million because the president is distracted, that’s $130 million that we could be spending in places like Youngstown, Ohio, or Michigan or rebuilding.”

But as soon as he finished, Gabbard, an Iraq War veteran, jumped in with a forceful rebuttal.

“Is that what you will tell the parents of those two soldiers who were just killed in Afghanistan? We have to be engaged? As a soldier, that answer is unacceptable,” she said. She continued:

We have to bring our troops home from Afghanistan. We are in a place in Afghanistan where we lost so many lives. We spent so much money. Money coming out of every one of our pockets and should be going into communities here at home. Meeting the needs of the people at home. We are no better off in Afghanistan today than when this war began.

Gabbard has billed herself as a non-interventionist, often calling on her military service to illustrate her objections to what she sees as needless conflicts overseas.

She also holds some controversial foreign policy views, including defending Syrian dictator Bashar al-Assad. But on Wednesday, she vocalized a theme that’s been embraced at points by everyone from Trump to Sen. Bernie Sanders (I-VT): that the US needs to end its costly and indefinite military engagements overseas.

Ryan responded to Gabbard’s statement by digging in on his idea of engagement. “I don’t want to be engaged. I wish we were spending this money in places that I represented that have been forgotten and we were rebuilding. The reality is if the United States is not engaged, the Taliban will grow.”

But Gabbard interjected, and the exchange got even more heated:

RYAN: I didn’t say squash them. When we were not there, they started flying planes into our buildings.

GABBARD: The Taliban didn’t attack us on 9/11; al-Qaeda did. That’s why I and other people joined the military. To go after al-Qaeda. Not the Taliban.

Rep. Tim Ryan and Rep. Tulsi Gabbard go head-to-head on Afghanistan, with Ryan arguing for U.S. engagement to dispel the Taliban from growing, and Gabbard arguing for the return of U.S. troops from Afghanistan. pic.twitter.com/VftyEH5dUe

Neither Ryan nor Gabbard has significant support at the moment, which makes this exchange a little less relevant. But it still matters — not least because the fact that US troops are still fighting and dying in Afghanistan rarely if ever comes up these days in national conversations.

Gabbard spoke openly and honestly about how the authorization to use force after 9/11 turned into an interminable war on terror that expanded outside the US’s stated mission — an issue that continues to resonate today with many progressive Democrats.

She’s also right; the US likely won’t defeat the Taliban with force. Facing that reality, the Trump administration is currently trying to quietly negotiate a peace deal with the Taliban after 17 years of war. It’s something any Democratic president will have to deal with too.

The migrant crisis on the southern border is consuming US politics. The candidates discussed immigration policy in broad terms, but a few Democrats called attention to the foreign policy implications of migration to the United States.

Specifically, they mentioned the need to provide increased humanitarian and foreign aid to Central America, namely the “Northern Triangle” countries of Honduras, El Salvador, and Guatemala, which is where most of the migrants at the southern border right now have fled from.

Julián Castro proposed a version of the “Marshall Plan” — the massive program to rebuild Europe after World War II — for the Northern Triangle countries so that the people living there “can find opportunity at home instead of coming to the United States to seek it.”

Booker also brought up the importance of an aid package. “We solve this problem by making investments to stop the reasons why people are driven here in the first place,” he said, adding that the US can use its resources and affirm the “values and human dignity of the people that come.” “We can have both by doing this the right way,” he said.

The crisis at the border is very much driven by conditions in the Northern Triangle countries — poverty and crime, corruption, climate change. The Trump administration has taken a punitive approach, threatening to cut off all aid unless those governments do more to stop people from fleeing. Though the administration restored some funding that was previously allocated, it also suspended additional aid and made future support dependent on whether countries curtail migration.

Both Democrats and Republicans have criticized this move as shortsighted — these programs help promote economic development, reduce poverty, and promote good governance and security that ultimately help mitigate the reasons people feel the need to flee their home countries.

These programs also take investment and time to work. But some candidates bringing it up, in addition to other immigration fixes, offer a stark contrast to the current administration.