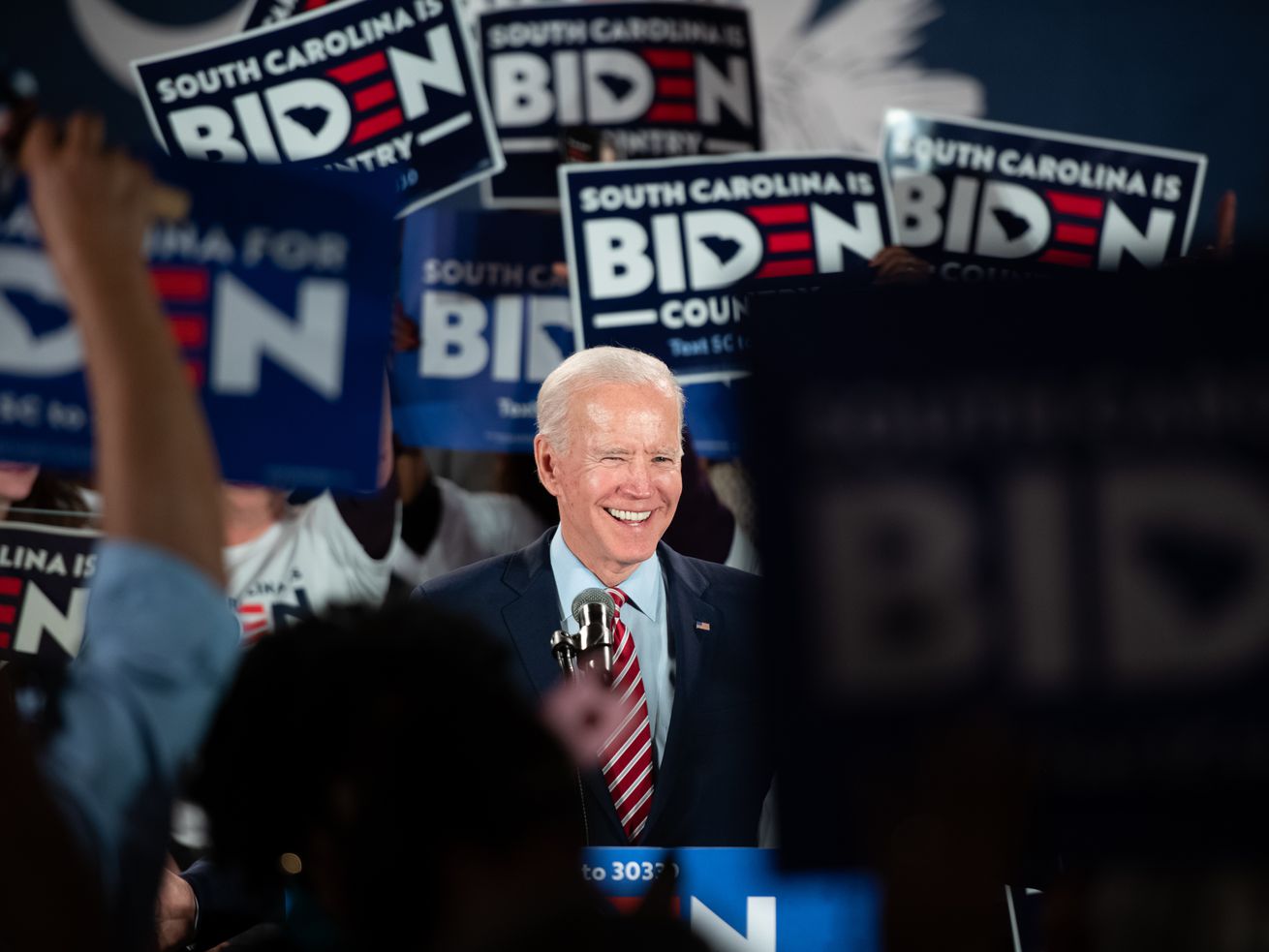 Biden is still poised to win the state, but the margin is expected to be much closer than it was before.

Joe Biden has banked his presidential campaign on winning South Carolina — a bet that is looking less and less likely to pay off.

For one, the latest polls don’t bode well for the former vice president. While Biden once held a 20-point lead in South Carolina, he’s up by just 5 points in a January Post and Courier poll. Similarly, the RealClearPolitics average has him less than 4 points ahead of Sen. Bernie Sanders, followed closely by billionaire activist Tom Steyer.

“Joe Biden didn’t capitalize on the default position he had and his base of support has eroded,” Anton Gunn, President Barack Obama’s 2008 South Carolina political director, told Vox. “South Carolina voters are smart and they don’t want a campaign that’s on life support.”

Biden has long been counting on a decisive win in South Carolina, a diverse early primary state where the Democratic electorate is 60 percent African American. He’s developed a strong base among older African American voters, many of whom associate him positively with Obama and see him as the best option to take on President Donald Trump. Tapping into this support is now critical for his floundering campaign.

Biden’s fourth- and fifth-place performances in Iowa and New Hampshire, however, are giving voters some pause. And the direct competition he’s gotten in the state from candidates like Steyer, who has spent significant time, along with more than $18 million on advertising, has offered a marked contrast to his more understated campaign. The former vice president trails several other candidates in the number of events that he’s held in the state up to this point.

“What I have said from the very beginning is that it is presumptuous to think, and certainly to say, that you have the black vote in your pocket,” says Johnnie Cordero, the head of the state’s Democratic Black Caucus, who has endorsed Steyer. Biden’s campaign, however, notes that it has not taken the state for granted and is further building up its ground game as the primary approaches.

For now, Biden is still on track to win South Carolina — albeit at margins that are much less favorable to him than the ones he was seeing in polls last year. A close victory by Biden is sure to hold less sway moving forward than what was once expected to be a landslide. But, as his campaign adds, the margin of victory might still surpass what we’ve seen candidates achieve in other early states. The results, too, could point to the fracturing of Biden’s support from older African Americans, a constituency that’s central to many other primary states down the line.

“If he was previously going to win by 15 points and now he wins by 5, that allows him to limp into Super Tuesday,” Gunn says.

The Biden camp has been counting on South Carolina, but its presence in the state has been lackluster

For months, Biden’s aides have tried to cushion potentially lukewarm showings in Iowa and New Hampshire and hinted that South Carolina is where he’d really take off.

On the night of the New Hampshire primary, Biden himself decamped to South Carolina in order to hold another campaign event and process the results. “I want you all to think of a number: 99.9 percent,” he told supporters. “That’s the percentage of African American voters who have not yet had a chance to vote in America.”

Biden’s reliance on the state makes a lot of sense: If he could pull off a 20-point win there, he’d go into Super Tuesday — just three days later — riding a swell of momentum. And he was polling far ahead of pretty much everyone for months, buoyed by his connection to Obama and deep in-state ties.

“I think we’re going to support somebody we know. And the only person who’s favored by this analysis is Joe Biden,” said South Carolina State Sen. Marlon Kimpson, a Biden backer.

Treating South Carolina as a guaranteed victory, though, has been perceived as a misstep by both political observers and voters.

Biden’s disappointing finishes so far haven’t done much to instill confidence in his ability to win, let alone bolster the case he’s made for himself as the most “electable” candidate. Although the outcome in South Carolina is set to be very different from both Iowa and New Hampshire, research by College of Charleston political science professor Gibbs Knotts finds that the first two states do have some effect on the Palmetto State.

“Are we disappointed? Yes,” Kimpson acknowledged. “Because one of the arguments is that Joe Biden would appeal to white working-class workers.”

But the recent election results aren’t the only thing that has contributed to concerns about Biden’s candidacy. Despite his repeated allusions to the state as an important base for him, he also hasn’t held quite as many events as other frontrunners, a proxy for face time, in the state.

According to a tracker from the Post and Courier, Biden has held 24 events in South Carolina, coming in behind other candidates who’ve already dropped out including Rep. Tim Ryan and former Housing and Urban Development Secretary Julián Castro. Other frontrunners, Steyer and Sanders, meanwhile, have held 40 and 35 events each.

When it comes to staffing, too, Biden lags behind both Steyer and Sanders. Steyer now has 102 staffers in the state while Sanders has 70 — and Biden has 60 and counting. And, according to CNN, Steyer has spent over $18.7 million in advertising aimed at South Carolinians, while as of last week Biden had spent $857,000.

These two factors — Biden’s recent defeats and his less-than-robust presence on the ground — have both been called out as reasons he’s seen an erosion in support.

Both Steyer and Sanders are close behind Biden, but they probably won’t surpass him

The candidate who’s seen the largest gains in recent months is Steyer, driven heavily by his increase in spending as well as the targeted emphasis he’s put on the state’s African American voters.

“I think Tom Steyer is overachieving and I think his ability to overachieve is because he has a very strong team on the ground, who is organizing,” Gunn says. “I’ve heard about Tom Steyer going to family reunions.”

Some observers emphasized that Steyer’s investments in the state, which included the decision to hire minority businesses for campaign needs and a cognizant push to bring on local staffers, had resonated with voters.

According to Molly McInerney of Change Research, the polling firm that conducts the Post and Courier’s state surveys, Steyer saw a 13-point jump between December 2019 and January 2020. Among African American voters, Steyer’s support spiked from 6 percent in December to 24 percent in January. In the same time, Biden’s support among African American voters dipped from 37 percent to 30 percent, and Sen. Elizabeth Warren saw declines, too.

Sen. Bernie Sanders, meanwhile, has remained relatively steady, with his overall support staying at 20 percent across both months and 16 percent among African American voters.

Dalhi Myers, vice-chair of the Richland County Council, is one of the former Biden supporters who has looked elsewhere. She now backs Sanders, who she views as a more aspirational candidate.

“We all started out a Biden family,” she said of her own parents and sibling. “We all thought that Joe Biden was the person to get us to a better place. I changed my mind because I decided that Joe Biden’s prescriptions were all, ‘let’s get back to where we were.’”

Based on a ranked-choice poll by FairVote from December, Biden’s second-choice votes were distributed across a few candidates: Sanders, Warren, and Steyer were the ones who saw the most gains.

Much like the elections in Iowa and New Hampshire, there are many voters in South Carolina who are still making up their minds — a contrast to past Democratic primaries in the Palmetto State.

“This is much more muddled for Democrats than I’m used to seeing in South Carolina,” says Furman University political science professor Danielle Vinson.

According to the Change Research poll conducted at the end of January, 41 percent of voters had landed on a candidate but said they could still change their minds. Another 9 percent said that their picks were more up in the air.

The size and characteristics of the Democratic field this cycle could mean a very different South Carolina primary compared to the ones that have taken place in recent elections. In 2016 and 2008, Hillary Clinton and Barack Obama won their respective primaries by double-digit margins. A victory in 2020 might not be so apparent.

“It’s been an all-or-nothing type of thing. It’s certainly possible we are in a new era without Clinton or Obama in the election,” Knotts told Vox. “You could end up fragmented.”

South Carolina’s role in the primary is significant. It takes place right before the all-important Super Tuesday, which includes 14 states and more than 1,300 delegates.

Given Biden’s sluggish start in the primary, South Carolina — along with Nevada — remains important for him to project strength going into the March 3 contests, which also include southern states Alabama, Texas, and North Carolina.

For Biden and other candidates, South Carolina will be a clear marker of how much support they’ve been able to secure from African American voters and a signal of their potential viability moving forward. Candidates that have very little African American support, for example, will be forced to confront why they’ve failed to appeal to a critical Democratic constituency — and, possibly, the end of their campaigns.

“For [Biden] and any other candidate, that almost is the death knell for their campaigns if they don’t do well in South Carolina,” Cordero told Vox.

South Carolina and Nevada were added in 2008 to the set of four early states that vote in the Democratic primary in an attempt to ensure that voters of color had a say closer to the start of the process. Since then, no Democratic candidate has won the nomination without South Carolina.

“One of the hard resets will happen after South Carolina. I think it will be a very defining moment and a game-change moment,” Democratic strategist Antjuan Seawright told Vox.