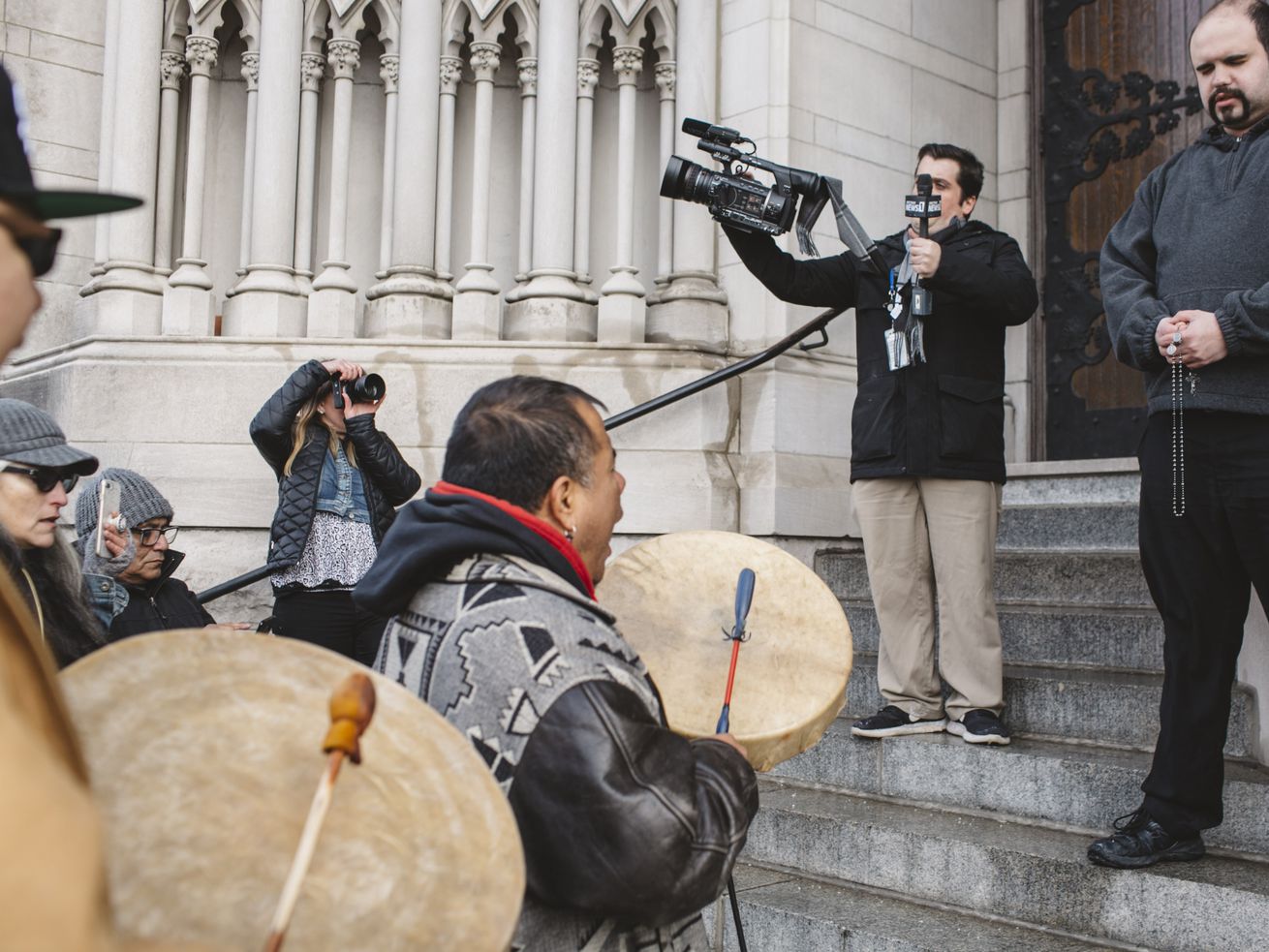 What America is missing about the confrontation between a MAGA-hatted teen and a Native American elder.

On Friday, students from Kentucky’s Covington Catholic High School encountered a Native American elder at the March for Life in Washington, DC, and appeared to taunt him.

By Tuesday, video of the incident had gone viral; longer videos, giving more context, had been released; one of the students, Nick Sandmann, had issued a detailed statement telling his side of the story; and multiple members of the media had apologized for jumping to conclusions.

In his statement, Sandmann said that he and his fellow students were simply chanting their school spirit chants, with permission from an adult chaperone, to counter insults being directed at them by a group of protesters. He said that when they had been chanting for some time, another group, including elder Nathan Phillips, approached them.

“I believed that by remaining motionless and calm, I was helping to diffuse the situation,” Sandmann said of his interaction with Phillips. “I said a silent prayer that the situation would not get out of hand.”

“I was not disrespectful to Mr. Phillips,” he added during a Wednesday interview with Today’s Savannah Guthrie.

In the wake of Sandmann’s statement and the release of additional video, some have defended the Covington Catholic students. “Far from engaging in racially motivated harassment, the group of mostly white, MAGA-hat-wearing male teenagers remained relatively calm and restrained,” wrote Robby Soave at Reason.

But the increasingly contentious public conversation around the episode may be missing the point.

The smirking silence with which Sandmann confronted elder Nathan Phillips was actually incredibly telling, according to Adam Howard, an education professor at Colby College and the author of Learning Privilege: Lessons of Power and Identity in Affluent Schooling. Sandmann’s expression clearly “communicates that I’m better than you, that I don’t even have enough respect for you to even say anything to communicate,” Howard told me.

The student’s behavior was the embodiment of privilege, Howard said, and nothing that came after the initial viral video changes that.

I reached out to Howard, who previously wrote for Vox about the culture of elite private schools, to ask how that culture might help us understand the March for Life video and its aftermath. In a phone interview, which has been condensed and edited, he said that the video and the reactions to it expose not just the problem of privilege in America but our inability as a society to reckon with that problem.

What did you see when you saw the March for Life video for the first time?

When you saw the young man’s face looking at the elder, and just the smirk, and then having a whole group around him of his fellow classmates, all boys, doing the various things they were doing — chanting, doing tomahawk things, racist behaviors — this is what privilege looks like. This is what he has learned not only from his schooling but also from other sources of education, which include family and the larger national context.

What he’s learned is this contempt toward others, this kind of privileged white male gaze that communicates, “I’m better than you, I don’t even have enough respect for you to even say anything to communicate, but I will communicate everything I need to through my body language.” That overconfidence, and that sense of entitlement, all of it was being performed in that moment.

As I was reading the articles, the ways in which people were trying to make sense of that initially, none of the conversation really focused on privilege and that these were a group of privileged boys from a privileged institution.

What was your reaction when you saw additional videos released after the initial viral video, and the conversation around those subsequent videos?

Even in the other videos, [Sandmann] was still looking stone-faced, smirking. That privileged white male gaze that every minority is very familiar with — when that gaze is upon you as a minority, you know what it communicates, and it communicates that “you’re inferior to me, I have a particular kind of perception of myself that places me above you.” That performance was also being reinforced by all his classmates kind of cheering him on.

Silence plays an incredibly important part in that performance, because as soon as the boy says something, then we can confront him, we can dissect it, we can challenge it, and so part of it was that he wasn’t even giving anything over to be challenged in any way.

We don’t know what he was exactly thinking at that moment, because he didn’t communicate anything verbally. That’s how privilege works — it’s constantly performed and embodied in particular ways where it’s hard to challenge it.

It sounds like you’re saying we can see privilege at play in this video regardless of Sandmann’s statement or the longer video that was released later. Is that right?

I would argue that all of those things are teaching them incredibly important lessons, and we need to be more mindful and intentional about the kinds of lessons we want to teach young people.

Earlier in our conversation, you mentioned that the video reminded you of something that happened at your institution. Can you talk about that incident?

Several years ago, we had this incident on campus, and it sent shock waves throughout our small, elite liberal arts college. It involved members of a male sports team. Shortly after this incident, I was asked, along with another faculty colleague, to lead and facilitate this community conversation.

Several hundred people attended, and it was a three-hour event, and it was emotionally charged — people crying, and raised voices every once in a while. It was very obvious that a lot of people were affected by this in pretty profound ways.

What was interesting is that the first two rows of this gathering space were all teammates of the guys who were involved in this incident, and they sat there and didn’t say a word for the entire three-hour period. They had that smirk on their faces, their arms crossed, and even though they didn’t say anything, their contempt for what was going on, everything they were communicating without saying a word — it completely overshadowed everything that we were trying to do.

We were trying to heal our community, and we weren’t fully able to. It was so destructive; it was so disruptive. Anytime you challenge privilege, there’s going to be attempts to disrupt those efforts.

How should the fact that Covington Catholic is an all-boys’ school factor into our understanding of this incident?

When I research all-boys’ schools, the headmasters and others will claim that it allows students to express themselves freely, and that they’re more involved in the arts and in creative endeavors and that they’re not negatively impacted by having girls present and the peer pressure that goes along with that. I think that’s a bunch of crap.

Often you have this kind of mob mentality that forms, because elite schools, part of what they do is teach their students to always prove that they’re the best. So what ends up happening is that it’s always a contest of who’s the best man. A lot of that is connected to sexual conquest, proving certain things that just aren’t very healthy ways of thinking about what it means to be a man.

What can we learn as a society from this whole incident — the first video, but also the longer video and the reactions to all of it?

What’s problematic from this larger incident, if you take [it] from the moment this goes viral to now, is that we easily dismiss things that need to be discussed. People are trying to find holes in the original narrative, and as soon as they find those holes, then that gives us permission to not discuss what we need to be discussing.

Part of that is, what are privileged, white, young men learning about themselves, not just through their education and their family but through what’s going on at the national level? How they are making sense of themselves, others, and the world around them, and then how are they acting on that? Those are the types of conversations that we need to be [having], and I don’t know how we get there. It requires us to actually be willing to get past, “This narrative is flawed, therefore there’s nothing to be discussed here,” to, “What can we learn from this?”