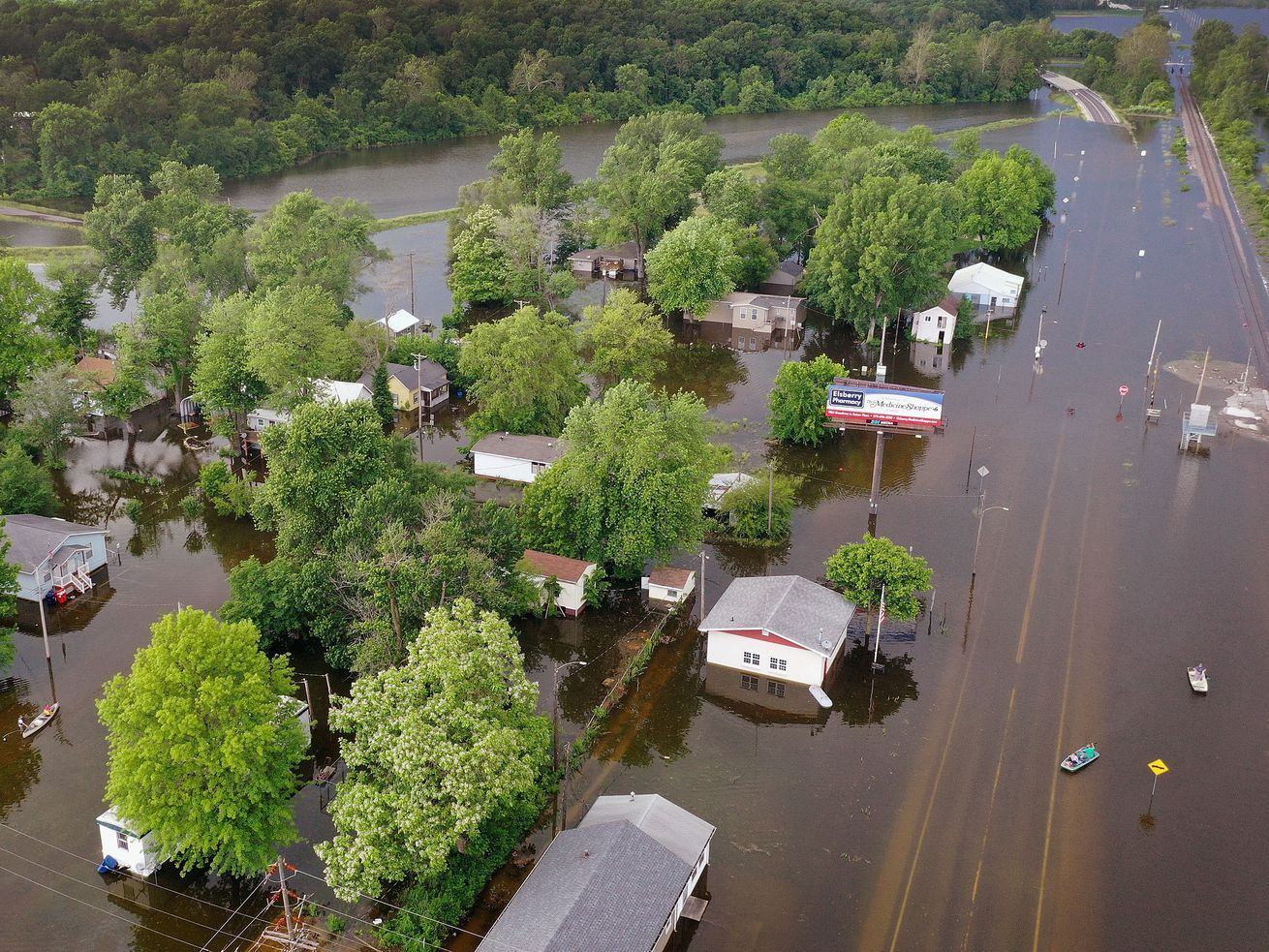 Torrential downpours have flooded huge swaths of the Midwest and the Southeast since last week. Rain over the weekend triggered flash floods in several states, including Tennessee, Kentucky, Texas, Oklahoma, North Carolina, and Florida. In some states, more than a month’s worth of rain fell in a day.

Beyond flash floods, rivers rising more slowly in places like Iowa have threatened drinking water. In Illinois, flooding this past week has closed roads and bridges. Atlanta broke a single-day rainfall record on Saturday with 4 inches of rain. Nebraska issued a second disaster declaration last week in response to the floods.

Amazing views of the Mississippi River along the St. Louis riverfront from Eads Bridge to the Gateway Arch. The river hasn’t been this high since the Great Flood of 1993. Photos were taken on Thursday June 6th around 400 pm when the level was near 45.2 ft. #stlwx #mowx #ilwx pic.twitter.com/dm9JfUqn9N

These rains have come atop flooding tied to the wet winter in many parts of the country followed by a wet spring. The ongoing flooding has already led to several deaths and, once the water recedes, will exact a huge toll on the economy. One of the biggest concerns is the impact of floods on crops like corn and soy, which are mainly grown in the Midwest. Waters have already damaged some fields, and the soaked soil is preventing new crops from being planted. That’s more bad news for farmers already struggling under the Trump administration’s ongoing trade war.

And more rain is coming. The National Weather Service is projecting continued rain and flooding along the Mississippi River this week, stretching through Illinois, Iowa, Missouri, Arkansas, Louisiana, and Mississippi.

As our colleagues @NWSWPC indicate… the forecast for precipitation amounts will keep the #Midwest to the #East wet over the next week, as a series of cold fronts produce showers and thunderstorms with locally heavy rainfall. Meanwhile, the #West will remain dry. https://t.co/EZCnTWIWpw

But as with the rash of tornadoes we saw in recent weeks, the factors that fueled the heavy rains were brewing months in advance. More extreme rainfall aligns with what scientists expect as the climate changes. And forecasters warned weeks ago that “unprecedented” flooding was on the way.

In March, the National Oceanic and Atmospheric Administration issued its spring outlook report amid extensive flooding that was already occurring in the Midwest. Early spring rain and melting snow stranded people in South Dakota as water blocked roads. Offutt Air Force Base in Nebraska, the headquarters of US Strategic Command, saw floodwaters rise to 7 feet deep.

NOAA forecast that two-thirds of the contiguous United States would face elevated flood risks. “This is shaping up to be a potentially unprecedented flood season, with more than 200 million people at risk for flooding in their communities,” Ed Clark, director of NOAA’s National Water Center in Tuscaloosa, Alabama, said in March.

She explained that signs of an increased flooding potential this year started to emerge in the winter. “The stage had been set where we had quite a bit of above-normal snowpack in the upper Great Plains,” she said.

The cold temperatures this winter, including a polar vortex, froze rivers across many parts of the United States and allowed all that snow and ice to persist into the spring. With rains in March and April, ice on rivers created ice jams, effectively creating dams that allowed water levels to rise and overtop banks and levees. This was the key driver behind the spring floods. Even as floodwaters receded, rivers remained swollen as late-season snow continued to thaw into May.

Forecasters realized that the early-season flooding would exacerbate flooding a few months later, even with typical seasonal rainfall. That’s because much of the soil in the Midwest and Southeast was already saturated with water. Any more water on top of that wouldn’t infiltrate the soil and instead would accumulate at the surface.

And the rain in recent weeks was anything but typical. Severe thunderstorms cropped up across the United States over the past week, with many spawning destructive and deadly tornadoes. NOAA reported last week that this past May was the second-wettest May on record. It also capped the wettest 12-month span on record.

No individual weather event can be attributed to climate change. However, the recent severe rainfall comports with what scientists expect to happen due to global warming. As average temperatures rise, air can hold on to more moisture. Roughly every degree Celsius of temperature increase allows a parcel of air to hold on to 7 percent more water. That moisture is then released as an increasing amount of precipitation.

The warming the planet has experienced so far is already driving up the likelihood of extreme rainfall events. And as temperatures continue to rise, the odds of heavy rain will continue to increase. The number of one-in-five-year rainfall events is on the rise. And the amount of rain poured out in a once-every-30-years precipitation event is going up too.

That means the likelihood of heavy rainfall, and the severity of that rainfall, is on the rise. Even if the season average precipitation doesn’t change, parts of the country like California are moving toward a drought-to-deluge cycle, a phenomenon researchers refer to as whiplash.

And there will likely be little relief for those drenched by the recent weather over the next few weeks. “We do see this pattern continuing into the summer,” Cognitore said.