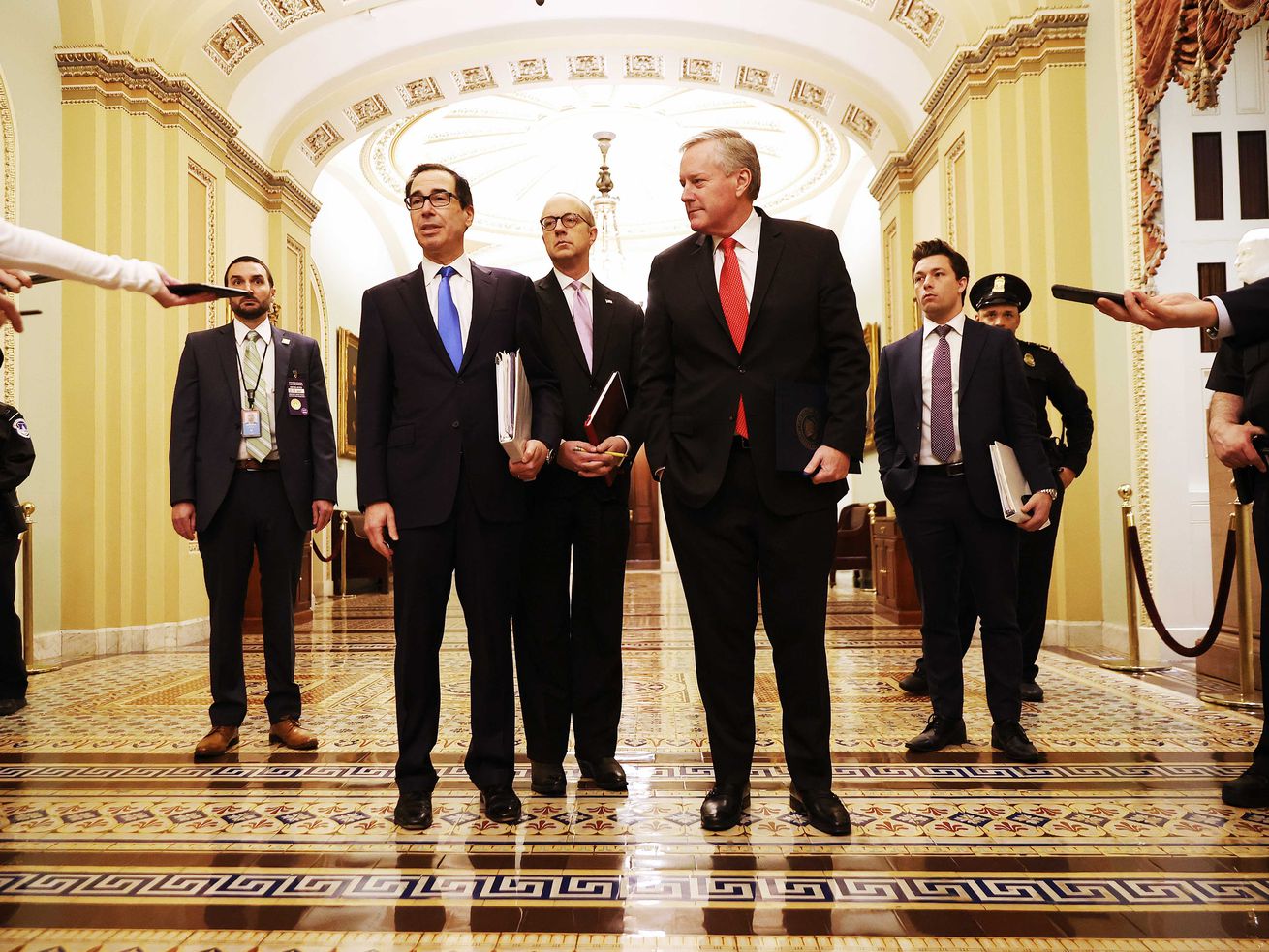 The massive legislation includes direct payments, an expansion of unemployment insurance, and loans for small businesses.

The Senate on Wednesday evening passed a massive $2 trillion coronavirus stimulus package targeting relief toward America’s workers, hospitals, industries, and state and local governments. The legislation, which was approved via a unanimous 96-0 vote, now heads to the House, which is expected to vote on it this Friday.

“We’re going to pass this bipartisan relief package, send it over the House so they can put it on the President’s desk,” Senate Majority Leader Mitch McConnell said Wednesday evening. “Our nation obviously is going through a kind of crisis that is totally unprecedented in recent memory.” He added that the upper chamber’s next anticipated vote won’t take place until April 20, though lawmakers would stay “nimble” in case they needed to return before then.

Though the preceding days had been filled with tense negotiations that occasionally erupted into public shouting matches on the Senate floor, lawmakers worked relatively quickly for Congress as they responded to an unprecedented economic crisis caused by the pandemic. Senate Minority Leader Chuck Schumer and White House Treasury Secretary Steven Mnuchin met six times on Monday alone, working until the early hours of the morning on Tuesday to hammer out a deal. In a statement, Schumer said he was pleased with the result.

“Rather than accept such a fundamentally flawed, partisan bill, Senate Democrats have been working hard on a bipartisan bill with Treasury Secretary Steven Mnuchin and President Trump,” Schumer said. “I am pleased to report that our hard work has paid off.”

The final product is so large in part because it contains both Republican and Democratic proposals: $500 billion in federal funding for big businesses and municipalities hit hard by the coronavirus outbreak, as well as a direct one-time cash payment to Americans and four months of expanded unemployment insurance.

Schumer, the lead Democrat negotiating, appeared on the Senate floor early Tuesday afternoon to announce Democrats were closer to a deal after securing several key provisions, including expanded unemployment insurance for laid-off workers, and oversight on that $500 billion loan program for businesses.

“Last night, I thought we were on the five-yard line. Right now, we’re on the two,” Schumer said. “At this point, of the few outstanding issues, I don’t see any one that can’t be overcome within the next few hours.”

After a deal was reached early Wednesday morning, McConnell moved quickly to get the bill to the floor, and fielded objections by some members of his conference over the unemployment insurance provisions. McConnell had previously spent the beginning of the week signaling impatience and frustration with Senate Democrats, whom he blamed for unnecessarily holding up the process after they shot down two procedural votes to move the bill forward.

Democrats, meanwhile, blamed McConnell for cutting them out of the beginning of the bill drafting process and not bringing them in until Republicans had put forward their opening bid.

Now that the Senate has approved this deal, it must still clear the House, where Democrats have been discussing passing the bill by voice vote — both to expedite the bill’s passage and to protect members by keeping them at home.

What the plan includes

A $500 billion loan program for businesses: The biggest sticking point between Democrats and Republicans throughout the negotiations was $500 billion in emergency loans both for large businesses and municipalities grappling with the coronavirus outbreak. For instance, $50 billion of that money was allotted to passenger airlines, according to the Washington Post.

Rather than trying to negotiate that figure down, Democrats instead negotiated to have strings attached to it. Instead of giving the Trump administration broad discretion to make the loans, Schumer and Pelosi said there will likely be a new inspector general in the Treasury Department specifically to oversee these funds, as well as a congressional oversight panel to examine how the money is being used. Schumer’s office also announced they secured a provision that will “prohibit businesses controlled by the President, Vice President, Members of Congress, and heads of Executive Departments from receiving loans or investments from Treasury programs.” The children, spouses or in-laws of lawmakers and executive officials also cannot receive these loans.

Some additional conditions, championed by progressives and supported by the public, including a requirement for companies to implement a $15 minimum wage, have not made it into the final legislation.

Direct payments to adults below a certain income threshold: The legislation includes a one-time $1,200 check that would be sent to most adults making $75,000 or less annually, according to past tax returns. A $500 payment would also be sent to cover every child in qualifying households. The final policy marks a significant change from the direct payments initially proposed by Republicans, which would have given less to many individuals who do not have taxable income. It now includes the majority of adults who are under the $75,000 threshold and phases the payment out as people’s incomes increase.

The package now heads over to the House, where Democrats also have their own $2.5 trillion economic stimulus bill, which Pelosi unveiled on Monday. In order to proceed expeditiously, the House is expected to take up the Senate deal, rather than going to conference to hash out differences between the two chambers.

Since the majority of lawmakers are currently on recess, the lower chamber’s challenge was figuring out how to vote on it.

House Rules Chair Jim McGovern had urged his colleagues to consider unanimous consent or voice voting with the members who are present, instead of remote voting. House Majority Leader Steny Hoyer announced Wednesday that lawmakers would use voice voting this Friday, Roll Call’s Jennifer Shutt reports.

As ABC News reports, one of the concerns that had been raised about remote voting is that it contradicts policies that have been laid out in the Constitution regarding how Congress should convene in person. Some lawmakers have worried, too, that it could set a concerning precedent for other votes that take place down the line. While the possibility could pick up momentum if it appears necessary in the weeks to come, it’s not set to happen this week with the stimulus bill.