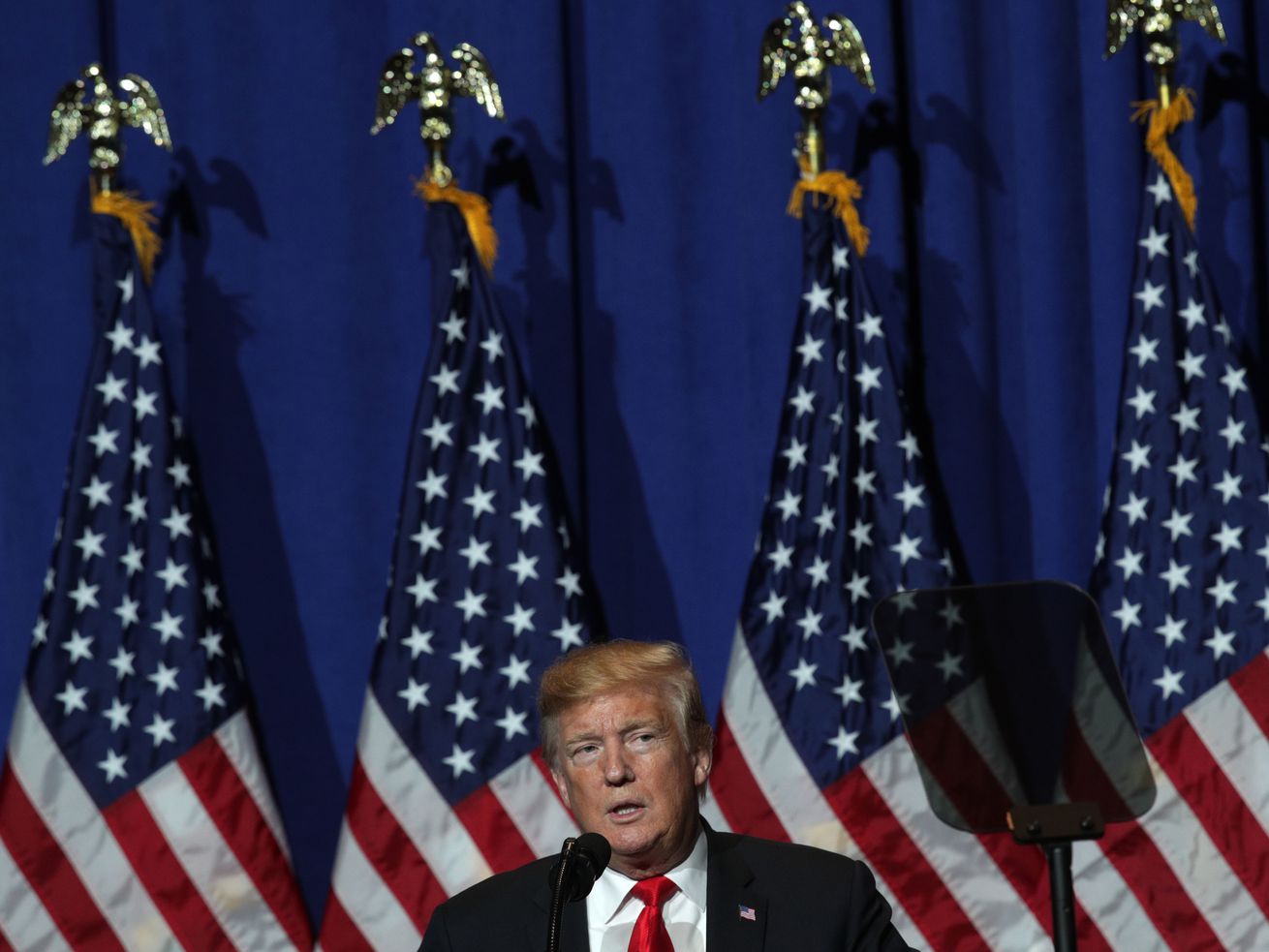 Trump’s tariffs on Mexican products could cost American families up to $900 each.

Whatever President Donald Trump might say, the burden of his planned tariffs on Mexico will be borne by Americans — as much as $900 per household, according to a group of economists Vox surveyed.

The auto industry is by far the most significant casualty; America’s biggest imports from Mexico are cars and auto parts. But data processors, telephones, televisions, and even beer are also moving all the time across the border. Whether it’s a car or a Corona, Americans are going to wind up paying the price for Trump’s trade war.

“The president seems not to comprehend that unilateral tariffs aren’t leverage at all. US tariffs are taxes on American households and businesses, so imposing them will always be an act of self-destruction,” Dan Ikenson, who leads trade studies at the libertarian Cato Institute, told me. “Trump may believe he can dictate demands because the smaller Mexican economy is more dependent on the US economy than vice versa, but make no mistake: Both economies would be hurt significantly by the tariff war being threatened.”

It gets worse. Tariffs land hardest on lower-income Americans, who pay the same cost on many goods as their richer peers. So Trump is, in essence, imposing a regressive tax on his own people.

The president’s argument is that all this additional cost is worth it. The tariffs are necessary to stem migration through the southern border, the singular obsession of his presidency. If the costs get too high, then companies will just relocate to the United States to avoid these tariffs.

In order not to pay Tariffs, if they start rising, companies will leave Mexico, which has taken 30% of our Auto Industry, and come back home to the USA. Mexico must take back their country from the drug lords and cartels. The Tariff is about stopping drugs as well as illegals!

But every economist I spoke with found Trump’s argument to be ludicrous spin.

“I don’t think the United States is a viable location for many of the production activities that are occurring in Mexico,” Kimberly Clausing, an economist at Reed College, told me. “A more likely response would be offshoring to another country, or turning to automation to do those activities in a less labor-intensive way in the United States.”

So instead, Trump will either encourage companies to leave Mexico for somewhere else abroad or hasten a turn toward automation — which is already to blame for much of the pain that old manufacturing towns face and Trump promised to relieve. Worse still, if the tariffs get high enough, they could prompt US companies to start tightening their belts.

As Vox’s Matt Yglesias has written, the political theory behind Trump’s tariffs is clearly deeply flawed. Republicans in Congress don’t seem pleased with the president either. But no matter what, economists say it is American consumers who will be stuck with the bill.

Americans will pay more for cars, laptops, and beer

Tariffs are levied on products imported from another country into the United States, based on a percentage of the product’s price. Trump has said he would start with a 5 percent tariff on Mexican imports beginning June 10 and then he plans to increase the tariff every month until they hit 25 percent. Companies importing products subject to a tariff will typically respond by simply raising the price of their products to cover the cost.

So the price of products imported from Mexico is going to rise — with motor vehicles looming largest. Not only are fully completed cars built in Mexico and then shipped to the United States for sale, but particular parts for cars, vans, and trucks also make up much of the inventory moving between the US and Mexico.

“Autos and parts are the single most important import, and many parts cross the border multiple times,” Robert Scott at the Economic Policy Institute says. “Tariffs will raise the costs of North American vehicles and reduce their competitiveness with imports from other countries. It is a lose-lose strategy.”

Cato’s Ikenson deployed this Trump-appropriate analogy to illustrate the scope of the problem.

“Motor vehicles and motor vehicle parts accounted for one-third of the value of all US imports from Mexico, and much of that cross-border trade was in unfinished product,” he said. “In other words, the factory floor spans the US-Mexican border, so imposing tariffs is akin to erecting a concrete wall through the middle of that factory.”

It’s not just the autos, though, or the avocados that so many Americans (including this one) love. Mexico is the US’s second-biggest trade partner, after China, having surpassed Canada in the past couple of years. The Washington Post reported, using Commerce Department data, on some of the other top imports from Mexico to the United States.

This is what is about to become more expensive if Trump’s tariffs take effect:

There could be less predictable outcomes too: Jason Furman, who was President Obama’s top economic adviser, noted that supply chains could be disrupted as a result of the tariffs.

If a product is finished in Mexico and shipped to the US from there, but had been mostly produced elsewhere, then the tariff is a disproportionately large burden on the manufacturer. If a product is 5 percent produced in Mexico and now faces a 5 percent tariff, that’s like a 100 percent tax on the Mexican production. Companies are going to reevaluate their production chain.

“This dramatically reduces the ability to move intermediate inputs back and forth across the border. Just the uncertainty associated with this possibility has the potential to permanently alter supply chains,” Furman said. “In part, that might result in some activity being repatriated to the United States. But in part, it will also mean losing activity entirely — for example, reducing the ability of US auto companies to compete with Japanese and German ones.”

Trump’s trade war is going to hurt. Its exact cost depends on a few factors, but the underlying math is simple, as Gary Hufbauer, senior fellow at the Peterson Institute for International Economic, laid it out to me. A 5 percent tariff on $360 billion worth of imports, spread across 100 million households, equals $180 for every American family in a year. If the tariffs gradually increase to 25 percent, as Trump has threatened to do, that is $900 for each household in a year.

And remember, that $900 would come on top of the tariffs Trump has already enacted, as Clausing pointed out.

“Study after study analyzing the Trump tariffs has shown that the burden is completely passed through to consumers,” she said.

Low-income Americans are going to feel the most pain

Everybody agrees that tariffs function as a regressive tax, which means they hit lower-income Americans harder than more affluent ones.

“Tariffs should be thought of as a type of consumption tax, like an excise tax. Excise taxes impact taxpayers by reducing real incomes (products get more expensive),” Kyle Pomerleau at the Tax Foundation says. “In total, tariffs are regressive in that the poor face a greater burden than the rich.”

This January 2017 analysis from Furman, Katheryn Russ, and Jay Shambaugh sums it up nicely:

These estimates show that the poorest 10% to 20% of households in the income distribution pay about $95 a year due to tariffs, middle-income households pay roughly $190, and the richest 10% about $500. In the figure below, we also show a range of higher tariff burdens that reflect some impact on prices of domestic goods

If tariffs were raised by 10 percentage points across the board, the cost of households’ 2014 consumption bundles (all else equal, including exchange rates) would have risen by $301 and $307 for the lowest two income deciles, $611 and $716 for the fifth and sixth income deciles, and $1,462 for the households in the highest income decile, assuming the full tariffs are passed through to consumers and have no additional impact on domestic prices.

If those are too many numbers for you, these two charts tell the story quite clearly: The poorer you are, the more of your income will be spent covering the cost of Trump’s tariffs.

There are other costs too. Most directly, American taxpayers are bailing out the farmers affected by Trump’s tariffs, at the president’s urging.

More broadly, if American companies become less competitive globally as a result of the tariffs, that could lead to layoffs for US workers.

Trump might be screwing up his own trade deal

The most inexplicable potential consequence of the president’s tariffs would be the doom or at least the delayed approval of Trump’s beloved renegotiation of NAFTA, the rebranded USCMA (United States-Mexico-Canada Agreement).

“The tariffs put the USMCA ratification process on ice until the drama is resolved,” Hufbauer told me.

That was a concern shared by other economists I spoke with: the death of USCMA and, generally, further international embarrassment for the United States as Trump fights a trade war he doesn’t seem to know how to win.

“Among the indirect costs are likely to be a rejection (possibly by three legislatures) of the US-Mexico-Canada Agreement,” Ikenson said, “and the loss of all credibility that the United States is a reliable negotiator and trading partner.”

As for China, Trump’s chief trade nemesis, let’s be clear: The Tax Foundation’s Pomerleau and others told me the Mexican tariffs will likely do nothing to reduce the US trade deficit with the Chinese. One expected side effect is that tariffs will increase the value of the US dollar, which, yes, may reduce imports from other countries (like China), but will likely reduce American exports as well because US products will now more expensive.

That lack of cohesion or considered cause and effect is typical of Trump’s trade agenda, as Yglesias has written:

Nobody wins. But American consumers and workers will most certainly lose.