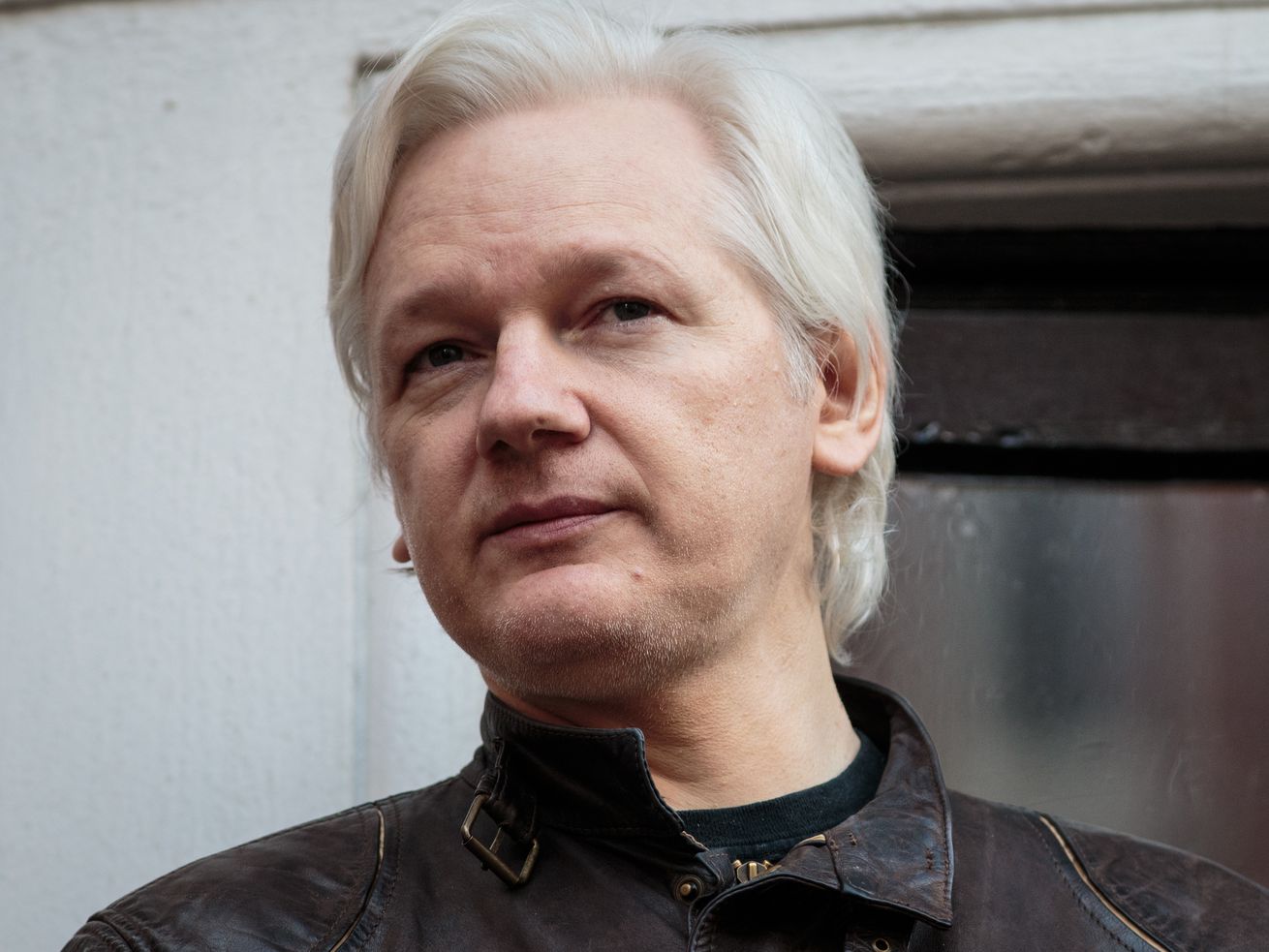 The story of his asylum and arrest is about more than WikiLeaks.

Now that he has been expelled from the Ecuadorian embassy in London, WikiLeaks founder Julian Assange faces extradition to the United States over a charge of conspiracy to commit computer intrusion.

But he took refuge in the embassy in the first place because two women accused him of sex crimes.

In 2010, a Swedish woman initially referred to in the press as Miss A said that Assange had tampered with a condom during sex with her on a visit to Stockholm, essentially forcing her to have unprotected sex. She has since spoken publicly under her name, Anna Ardin. Another woman, referred to as Miss W, said that during the same visit, Assange had penetrated her without a condom while she was sleeping.

Assange denied the allegations, but a court in England, where he lived at the time, ruled that he should be extradited to Sweden to face investigation. So he sought political asylum in London’s Ecuadorian embassy. Eager to bolster its reputation as a defender of free speech (and probably to make things inconvenient for the US, with whom it was feuding), Ecuador granted Assange’s request, and he remained in the embassy until this week.

Ardin and Miss W, meanwhile, were treated with widespread skepticism, accused in the media of being “honeytraps” or of acting on jealousy. Left-wing thinkers from Michael Moore to Naomi Wolf defended Assange, with Moore calling the allegations “hooey.”

Now Swedish authorities are considering reopening the case. “We are hopeful that they will make the right decision” and request that Assange be extradited to Sweden “so that he will finally face justice,” said Elisabeth Massi Fritz, a lawyer for Miss W, in a statement to Vox.

If both Sweden and the US seek extradition, it would likely be up to the UK to decide where to send Assange — and a debate is brewing in England over where, if anywhere, British authorities should send him. Assange’s arrest could lead to a public reexamination of the sex crime allegations against him, allegations that might get a more serious hearing in the #MeToo era.

The sex crime allegations against Assange stem from a visit he made to Stockholm in August 2010, a few months after WikiLeaks gained international notoriety by publishing material leaked by then-Army private and whistleblower Chelsea Manning about the US wars in Afghanistan and Iraq. Assange was visiting Sweden to meet with a political group there; according to police documents viewed by the Guardian, Ardin said she set up his visit and hosted him in her apartment.

At her apartment, Ardin said he began stroking her leg, then removing her clothes, breaking her necklace in the process. She said she tried to put her clothes back on but he took them off again. She told police she then allowed Assange to undress her, because “it was too late to stop Assange as she had gone along with it so far.”

Assange tried to have unprotected sex with her, she said, but she asked him to use a condom. He agreed, but, she said, he had “done something” to the condom so that it ripped before he ejaculated.

Assange told police that he had sex with Ardin but did not tear the condom, according to the Guardian.

In the days that followed, Ardin told a friend that she was still allowing Assange to stay with her, but they were not having sex because he had “exceeded the limits of what she felt she could accept,” the friend told police.

Miss W met Assange at a seminar organized by Ardin, she told police. They later met up and went to her apartment, where they started to have sex. But Assange did not want to use a condom, Miss W said, so they stopped and eventually fell asleep. Later that night, she said, they woke up and had consensual sex, during which he “unwillingly” used a condom. But in the morning, Miss W said, she woke up to find Assange penetrating her without a condom.

Assange has denied any wrongdoing with respect to Miss W. A lawyer for Assange has not yet responded to Vox’s request for comment.

After Ardin and Miss W reported their experiences to police, Swedish authorities opened an investigation. Assange had returned to London, and after a lengthy legal battle, a British court ruled in 2012 that he should be extradited to Sweden.

Assange’s lawyers were worried that, once in Sweden, he might be extradited to the US to face charges related to WikiLeaks. So Assange sought asylum in the Ecuadorian embassy. In granting his request, the Ecuadorian government said it was protecting Assange from the harsh punishment he could receive if sent to the US. A small majority of Ecuadorians supported the decision, according to the BBC.

In 2015, the statute of limitations on Ardin’s allegation expired. And in 2017, Swedish authorities dropped their investigation into Miss W’s claim because they saw no way to proceed while Assange was in the embassy.

But now that Assange has been arrested, Swedish prosecutors say they are considering reopening the investigation, according to USA Today. The statute of limitations on Miss W’s claim expires in 2020.

If Sweden and the US both seek extradition, it would likely be up to the UK to decide, Ashley Deeks, a law professor at the University of Virginia with expertise in extradition, told Vox. In making its decision, the British government could consider factors like the gravity of the allegations in each case, the order in which the requests were made, and the likelihood that one country might choose to extradite him to the other, she said.

“No one is above the law, and no one should be able to hide and escape from justice like Assange has done in this case,” said Fritz, the lawyer who represents Miss W, in her statement. “We are now awaiting the Swedish Prosecution Authority’s decision.”

The potential of a reopened Swedish investigation has already caused divisions in Britain. The left-wing Labour Party had urged Prime Minister Theresa May not to extradite Assange to the US, with party leader Jeremy Corbyn tweeting that Assange should not be punished for “exposing evidence of atrocities in Iraq and Afghanistan.” But now, some Labour Party members are calling attention to the allegations and advocating that Assange be extradited to Sweden.

The woman who has accused Assange of rape has asked for charges to be resumed. It is absolutely right he should face the full force of the law. https://t.co/Qa391XTRK4

Ardin tweeted her hope that Assange not be sent to the US.

I would be very surprised & sad if Julian is handed over to the US. For me this was never about anything else than his misconduct against me/women and his refusal to take responsibility for this. Too bad my case could never be investigated properly, but it’s already been closed.

Whatever the Swedish and British authorities decide, Assange’s arrest has reopened conversation about a case that had receded in public memory in the years Assange spent in the embassy.

Assange’s accusers were criticized and threatened

In 2010, controversy over the allegations was fierce. Assange was popular with many in the wake of WikiLeaks’ disclosures, and many on the left rushed to his defense when the allegations became public. Some, including Assange’s UK lawyer, hinted that Ardin and Miss W might be “honeytraps,” enlisted by the US government to help set up Assange. In one interview, Michael Moore called the investigation an example of “dirty tricks” by governments and corporations out to get Assange.

Others dismissed the women’s allegations as insignificant — at the Huffington Post, feminist writer Naomi Wolf wrote that Assange was guilty of no more than “narcissistic” behavior: “I understand, from the alleged victims’ complaints to the media, that Assange is also accused of texting and tweeting in the taxi on the way to one of the women’s apartments while on a date,” she wrote.

With no evidence of a link between the accusers and the US government, Kate Harding wrote at Salon at the time, “folks all over the blogosphere have been settling for the next best thing: making light of the sexual assault charges and smearing one of the alleged victims.”

The press dug through the accusers’ backgrounds and attempted to cast doubt on their motivations. The Daily Mail, for instance, noted that Ardin “had not only been the protegee of a militant feminist ­academic, but held the post of ‘campus sexual equity officer’” while working at a local university, and speculated that she might have been out to get Assange because she was jealous that he also had sex with Miss W.

Assange, for his part, fed criticism of his accusers. “Sweden is the Saudi Arabia of feminism,” he said in one interview. “I fell into a hornets’ nest of revolutionary feminism.”

But the women have always maintained that their stories are true.

“This has been a very long and painful process for my client,” Fritz said. “I’m fighting for her rights to be remembered. Getting justice and restitution is of utmost importance for her to be able to move on with her life.”

Thanks to the #MeToo movement, the public conversation around rape and sexual assault has changed since 2010. Unfortunately, women who come forward with allegations of sexual misconduct still face some of the kind of treatment that Ardin and Miss W received. But they may also receive more public support and understanding. If the allegations against Assange are revisited now, in the context of #MeToo, they may be taken more seriously.