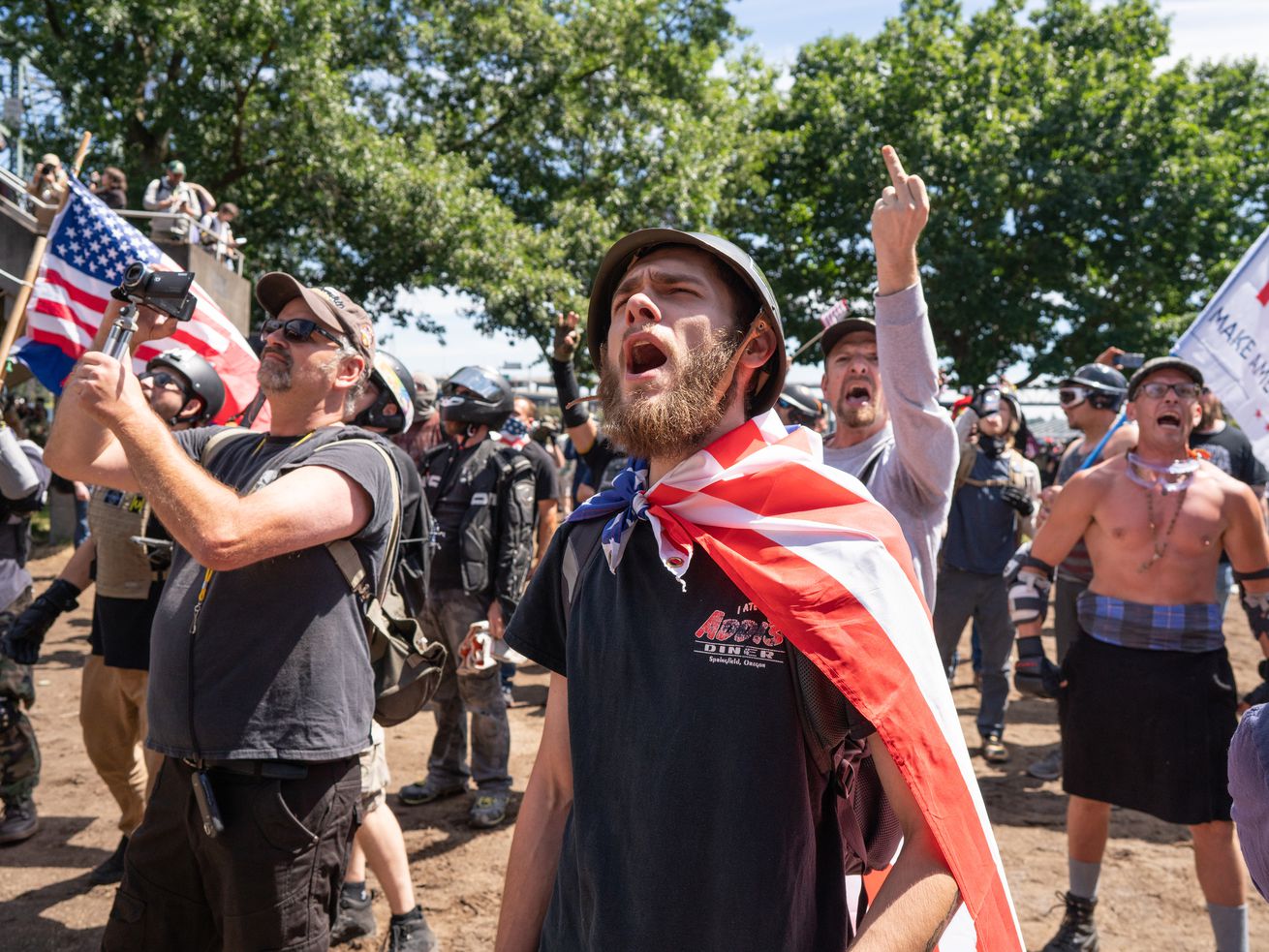 On Friday night on the streets of Manhattan, members of a far-right organization kicked and punched counterprotesters they believed to be members of Antifa — and weren’t arrested.

The brawl between the “Proud Boys” and counterprotesters started outside the Metropolitical Republican Club, where the group’s founder, Gavin McInnes, was reenacting the assassination of Inejiro Asanuma, the leader of the Japanese Socialist Party, in 1960.

Now Gov. Andrew Cuomo has ordered the New York state police to join the NYPD in investigating what happened, while the NYPD continues to look for “persons of interest” who were involved in the fighting. Reportedly, the NYPD will charge nine members of the Proud Boys with rioting or attempted assault. Three counterprotesters were charged on Friday night.

So who are the Proud Boys and their banned-from-Twitter leader? Created by McInnes, a “provocateur” and one of the original co-founders of Vice Media, who has described himself as “an old punk from Canada” and turned right in 2008 (the same year he left Vice over “creative differences”), the Proud Boys are a strange amalgamation of a men’s rights organization, a fight club and what some may see as a hate group — one that loves Donald Trump, hates Muslims (and Jews and trans people), but permits nonwhite membership.

The group has a magazine where members who win fights are celebrated with the slogan, “They fucked around. They found out.” And in the age of concerns about “civility” and worries about political violence surrounding the upcoming midterms, the Proud Boys — and McInnes, who believes violence is “a really effective way to solve problems” — are more interested in punching “faggots.”

As Jared Holt at Right Wing Watch told me, “The Proud Boys have been the right wing’s enforcers in the streets against those who dissent against them.”

From Vice Media to “cuckmercials”

In 1994, McInnes, alongside Shane Smith and Suroosh Alvi, launched Voice of Montreal, which later became Vice Media. McInnes was already the voice of a particular strain of right-wingerdom within the company, telling the New York Times, ‘’I love being white and I think it’s something to be very proud of.”

In what would become a standard McInnes move, he later attempted to couch his remarks as ironic humor in a letter to Gawker, telling the website that his remarks were a joke and adding, “It’s unfortunate that people in the know like Gawker are taking it all so seriously. I thought we were on the same page: baby boomer media like The Times is a laughingstock and we should do whatever we can to ridicule it.”

McInnes left Vice Media in 2008. Since then, he has moved to what he calls the “New Right,” which he seems to define as a combination of “Western chauvinism” and social and political libertarianism or perhaps libertinism (for example, he has written extensively on how women want to be “downright abused” and that he had to stop “playing nice” and begin “totally defiling the women I slept with” to get more women to have sex with him).

His shift to the far right also included espousing anti-Muslim sentiments (“the Muslim world is filled with shoeless, toothless, inbred, hill-dwelling, rifle-toting, sodomy-prone men”) and an embrace of anti-Semitism and anti-Israel sentiments, including a video he made for the far-right Canadian outlet Rebel Media initially called “10 Things I Hate about Jews” (or as he would later tweet, “10 THINGS I HATE ABOUT THE GODDAMN MOTHERFUCKING JEWS!”). He’s also argued that historically, perhaps Jews “were ostracized for a good reason.”

These videos, and some of his others, earned him a host of new fans, including David Duke. And though McInnes has attempted to push aside accusations of racism (which he argues doesn’t exist), he has written for both VDare and American Renaissance, the latter the publication of the “race-realist, white advocacy organization” New Century Foundation.

Much of McInnes’s work, and that of a large swath of what he would call the New Right, is focused on what he views as the “feminization” of culture and politics, from commercials or “cuckmercials” that show “emasculated men” (or too many mixed-race couples) to politics. In an interview last year with Metro, he said, “There is a real war on masculinity.”

And it’s that search for the renewal of a very specific kind of masculinity — and McInnes’s belief that Western culture is in trouble because of “social justice warriors” and the mainstream media “belittling” white men — that resulted in the Proud Boys.

“Proud of Your Boy”

The Proud Boys were officially launched in September 2016, on the website of Taki’s Magazine, a far-right publication for which white nationalist Richard Spencer once served as executive editor.

It started out as a joke, using the song “Proud of Your Boy” from Disney’s Aladdin musical as the basis for the name of the group and the hashtag #POYB, which appears alongside Proud Boy content on Twitter. Women are not permitted to be Proud Boys, as McInnes explained:

The basic tenet of the group is that they are “€œWestern chauvinists who refuse to apologize for creating the modern world.”€ Like Archie Bunker, they long for the days when “€œgirls were girls and men were men.”€ This wasn’€™t controversial even twenty years ago, but being proud of Western culture today is like being a crippled, black, lesbian communist in 1953.

According to the Proud Boys, “We do not discriminate based upon race or sexual orientation/preference. We are not an ‘ism,’ ‘ist,’ or ‘phobic’ that fits the Left’s narrative.” (However, McInnes himself has recently decided he no longer supports marriage equality because he believes it’s part of a secret plan to destroy Christianity.)

(As the Daily Beast’s Will Sommer wrote in February 2017, the Proud Boys’ rules are a “mindbender.” But this is real.) The third level is to get a specific Proud Boys tattoo.

But it’s the fourth and newest level that is getting the most attention in the wake of Friday’s events: get into a physical altercation for the “cause.” “You get beat up, kick the crap out of an antifa,” McInnes explained in 2017. And he added, “People say if someone’s fighting, go get a teacher. No, if someone’s f—ing up your sister, put them in the hospital.”

It’s that violence that the Proud Boys have become best known for, with the group even boasting of a “tactical defensive arm” known as the Fraternal Order of Alt-Knights (or “FOAK”) reportedly with McInnes’s backing. McInnes made a video praising the use of violence this June, saying, “What’s the matter with fighting? Fighting solves everything. The war on fighting is the same as the war on masculinity.”

In parades and rallies across the country, from Berkeley, California, to New York City, members of the Proud Boys have fought with counterprotesters, Antifa, and anyone who gets in their way. Jared Holt, of Right Wing Watch, told me that the group “acts as a violent pack of enforcers for the far-right.”

And at events for conservative commentator Ann Coulter and right-leaning speaker Milo Yiannopoulos, members of the Proud Boys have even attempted to act as “security,” but those efforts have descended into chaotic violence (although they spun it as a victory):

For his part, McInnes believes the violence of the Proud Boys (in his view, a response to left-leaning violence) is a logical response to how the “left” has responded to right-wing speaking events, writing in June 2017:

The right isn’€™t violent. The left is. By allowing these sociopaths to shut down free speech with violence you are all but demanding a war. Okay, fine, you got it. It’s official. This is a war.

“We in no way encouraged any violent behavior.”

The battles between the Proud Boys and far-left groups, including Antifa, have made McInnes a target of left-leaning groups. And when the Metropolitical Republican Club announced that he would be speaking there on October 12, anarchists responded by defacing the building, putting glue in the locks, and leaving a note stating that the group should not have invited “a hipster-fascist clown to dance for them.”

In response, Marc Molinaro, the GOP gubernatorial candidate, said in a statement, “Last night one of our state headquarter buildings was attacked by radical leftists who smashed windows, spray painted our door, glued our locks, and left a threatening note behind. This type of political violence and rank vandalism is unacceptable, and I call on New York Governor Andrew Cuomo to condemn this attack immediately and call for calm on the political left.”

But while the event was advertised as a speech by the “Godfather of the Hipster movement’ who has “stood up for Western Values,” the event was actually a reenactment of an assassination. As the website Bedford and Bowery described:

On stage he portrayed a different ultranationalist. Wearing glasses with caricatured Asian eyes drawn on the front, McInnes played Otoya Yamaguchi, a young far-right extremist who assassinated the leader of the Japanese Socialist Party on live television exactly 58 years ago on October 12, 1960. Images of the historical event have recently become a popular meme among the right.

An Asian Proud Boy played the character of the murdered Japanese socialist leader Inejiro Asanuma, and “translated” for McInnes in caricatured Japanese (and at one point mock Chinese).

McInnes even had a fake katana (a type of Japanese sword), which he was filmed swinging at counterprotesters outside the venue on Fox News (though the chyron implied that he was part of Antifa).

In a statement to Vox, the Metropolitan Republican Club attempted to explain its decision to invite McInnes to speak, saying:

The Club invited Gavin McInnes to speak here on October 12, 2018. He had spoken at the Club approximately a year and a half ago, at which time there was no hint of violence. We do invite speakers to the Club with differing political points of view – some we agree with and some which we do not. But we are staunch supporters of the 1st Amendment. We want to foster civil discussion, but never endorse violence. Gavin’s talk on Friday night, while at times was politically incorrect and a bit edgy, was certainly not inciting violence. … We must forcefully denounce any suggestion that the Club somehow deserved the hostility and threats we have received in recent days, simply because we invited a speaker that some people might disagree with.

For his part, McInnes appears to think that the violence was a setup, telling the Spectator, “I couldn’t help but think that the socialist Democrats see me reenacting this murder of a socialist and they go ‘gotta put some money on this, get some optics.’ I feel like this guy that got beat up was trying to get beat up.”

But the event that sparked the violence was a reenactment of an assassination of a political opponent, meant to celebrate the use of violence in politics — something that aligns very well with McInnes’s vision.