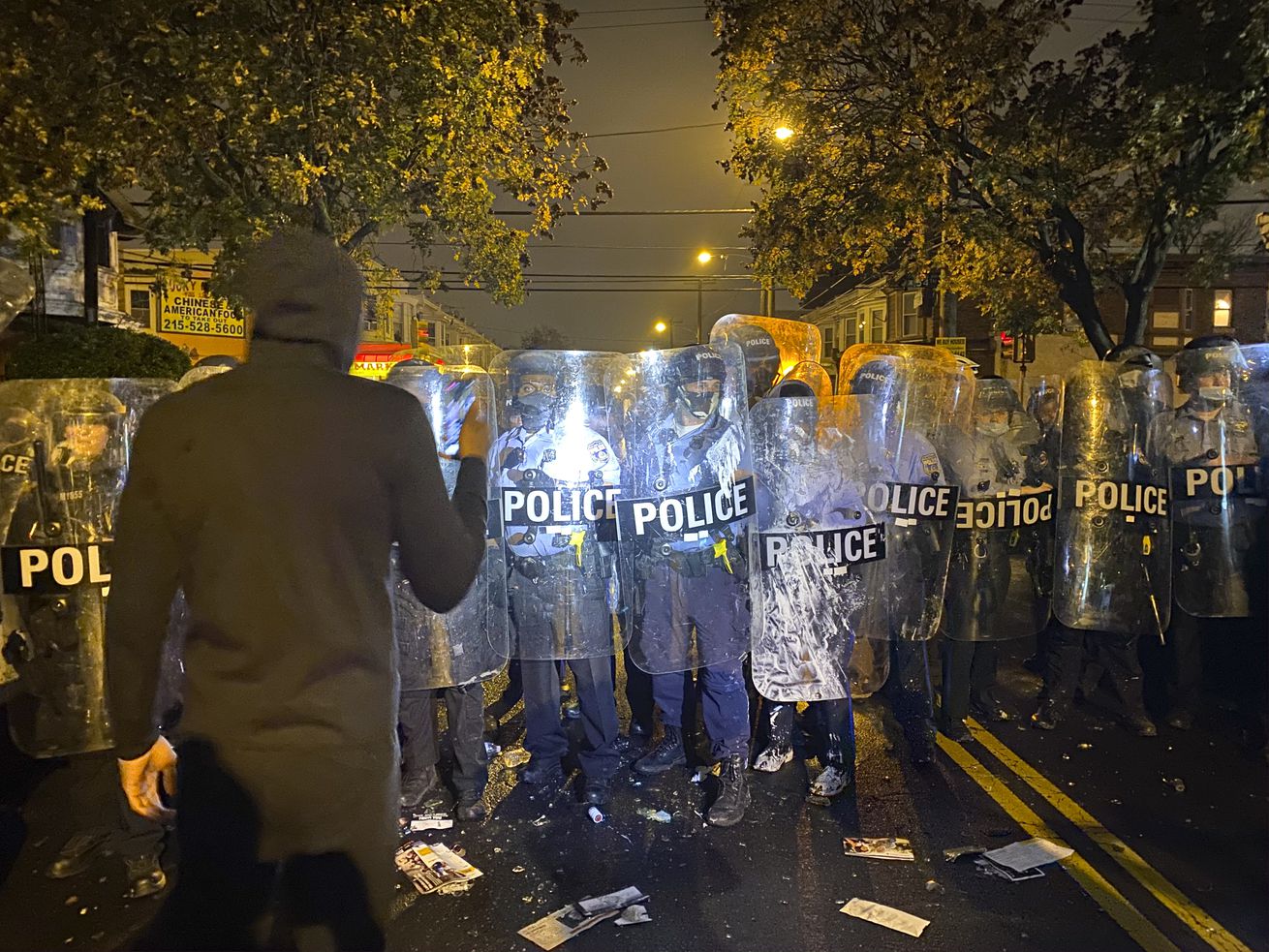 Philadelphia police in riot gear form a line in front of protesters in West Philadelphia on October 26, 2020. | Michael-Vincent D’Anella-Mercanti

Wallace, a 27-year-old Black man, was fatally shot in front of his mother while reportedly experiencing a mental health crisis.

Philadelphia is reeling after two police officers shot and killed a 27-year-old Black man named Walter Wallace Jr. on Monday afternoon. During the encounter, which was captured on video, both officers had their guns drawn as Wallace, who was reportedly experiencing a mental break, advanced toward the officers with a knife, though the knife is not visible in the video.

By Monday night, West Philadelphia, the site of heated Black Lives Matter protests in late May and early June, had become grounds for hours of unrest over the police shooting. Community leaders are calling for the police department to release body camera footage of the incident as others question whether the city’s new system for responding to behavioral health crises was put into effect on Monday.

Activists with groups like Reclaim Philadelphia have long demanded the defunding and dismantling of the Philadelphia Police Department, which they say has a police union contract that allows for the surveillance, harassment, displacement, and incarceration of Black and Latinx communities in the city.

What we know about the police killing of Walter Wallace Jr.

According to a report from the Philadelphia Police Department, officers made their way to the 6100 block of Locust Street in the Cobbs Creek neighborhood of West Philadelphia after receiving a report about a man with a knife. A live video posted to Instagram on Monday afternoon by a bystander sitting close by in a car on the block shows what took place in the moments before officers fired their weapons.

During this time, Wallace’s mother follows Wallace in an attempt to shield him and stop him from advancing toward the police. Other bystanders scream for both Wallace and the officers to stop. Officers can be heard yelling, “Back off, man!” and “Drop the weapon!” Another bystander, a young Black man, follows behind Wallace before officers scream, “Move! Move! Move!” to him as they prepare to use their weapons.

Once Wallace is back in the street, each officer fires several rounds of shots; Wallace falls to the ground immediately. His mother and other bystanders run to his side, visibly angry with the police for shooting him. In the video, Wallace is seen standing several feet away from the officers when they shoot him.

“I’m yelling, ‘Put down the gun, put down the gun,’ and everyone is saying, ‘Don’t shoot him, he’s gonna put [the knife] down, we know him,’” Maurice Holloway, a witness, told the Philadelphia Inquirer.

“Why didn’t they use a Taser?” Wallace’s father, Walter Wallace Sr., told the publication. “His mother was trying to defuse the situation.” He added, “He has mental issues. Why you have to gun him down?”

Philadelphia Mayor Jim Kenney, who spoke to the family Monday night, said the video of the incident “presents difficult questions that must be answered.” The two officers, whose names have not been released, were removed from street duty and the PPD’s Officer Involved Shooting Investigation Unit has launched an investigation into the shooting, which Philadelphia Police Commissioner Danielle Outlaw said will fully address residents’ questions about the fatal shooting. Both officers were wearing body cameras.

Ahead of the unrest, Outlaw said she planned to join Kenney to meet with members of the community and members of Wallace’s family to “hear their concerns.”

“While at the scene this evening, I heard and felt the anger of the community. Everyone involved will forever be impacted,” Outlaw said.

A large crowd assembled at the scene of the police killing Monday evening, with gatherers alleging excessive use of force on the part of the two officers. Protesters eventually moved to Malcolm X Park, where they chanted “Black Lives Matter” and Wallace’s name.

At a nearby police station, protesters were met with police officers who were dressed in riot gear and formed lines with shields and barricades.

A caravan of dozens of cars and protestors are driving up Walnut protesting the murder of Walter Wallace #Philadelphia #BlackLivesMatter pic.twitter.com/OxTwamfV0i

Hundreds of people also traveled to West Philly’s 52nd Street commercial corridor where vandalism and looting ensued, creating a scene that mirrored the unrest that took place in West Philly after the police killing of George Floyd in May.

According to police, at least 30 officers were injured in the protests, including from thrown bricks and rocks. One officer, who was run over by a black pickup truck in the early hours on Tuesday, was hospitalized and in stable condition with a broken leg later in the morning.

As police attempted to control the crowd, violence broke out. In various videos online, officers could be seen beating protesters with batons.

In another video, a Black woman is pinned to the ground as one officer repeatedly punches her in the face, with several officers forming a blockade around the assault.

City Council member Jamie Gauthier, who leads the district where Wallace was killed, demanded that the police department immediately release the body camera footage from both officers. “The public deserves a full, unvarnished accounting of what took place today,” Gauthier said.

The killing took place about a week before the presidential election, when Philadelphians will vote on a ballot measure to determine whether the city will restore its police oversight commission. Critics have long argued that the commission, however, would have no real power over the police department, as commission recommendations were historically overlooked and ignored. The body was also underfunded, and investigations into police misconduct took years.

Pennsylvania, and Philadelphia, is at the center of the presidential election, with some predicting the state could be the tipping point in determining who wins. Trump has seized on this reality by advocating for poll watchers in Philadelphia, and Donald Trump Jr. sensationalized the situation in the city on Tuesday morning, suggesting that people vote for Trump to avoid “more BLM riots in Pennsylvania.”

For activists, Wallace’s death further underscores their calls to push for greater attention to victims of police violence who have mental health conditions, like Daniel Prude, who was fatally shot by police in Rochester, New York, on March 23 while experiencing a mental health crisis. Activists have demanded that resources be redirected from police officers to emergency response systems and experts who are actually equipped to address such situations.

At the start of October, Philadelphia announced it had launched a program to flag 911 calls related to people experiencing a behavioral health crisis. It is unclear whether this initiative was in use on Monday. But as local PBS station WHYY points out, the police department has already trained nearly half of its officers in crisis response, and the department hopes to have a behavioral health specialist accompany officers on calls by the end of the year.

“Had these officers employed de-escalation techniques and non-lethal weapons … this young man might still have his life tonight. Had these officers valued the life of this Black man — had they treated him as a person experiencing mental health issues, instead of a criminal — we might be spared our collective outrage,” Gauthier said in a statement, adding, “In this moment of reckoning and pain for West Philly, we need accountability, we need justice, and we need it now.”