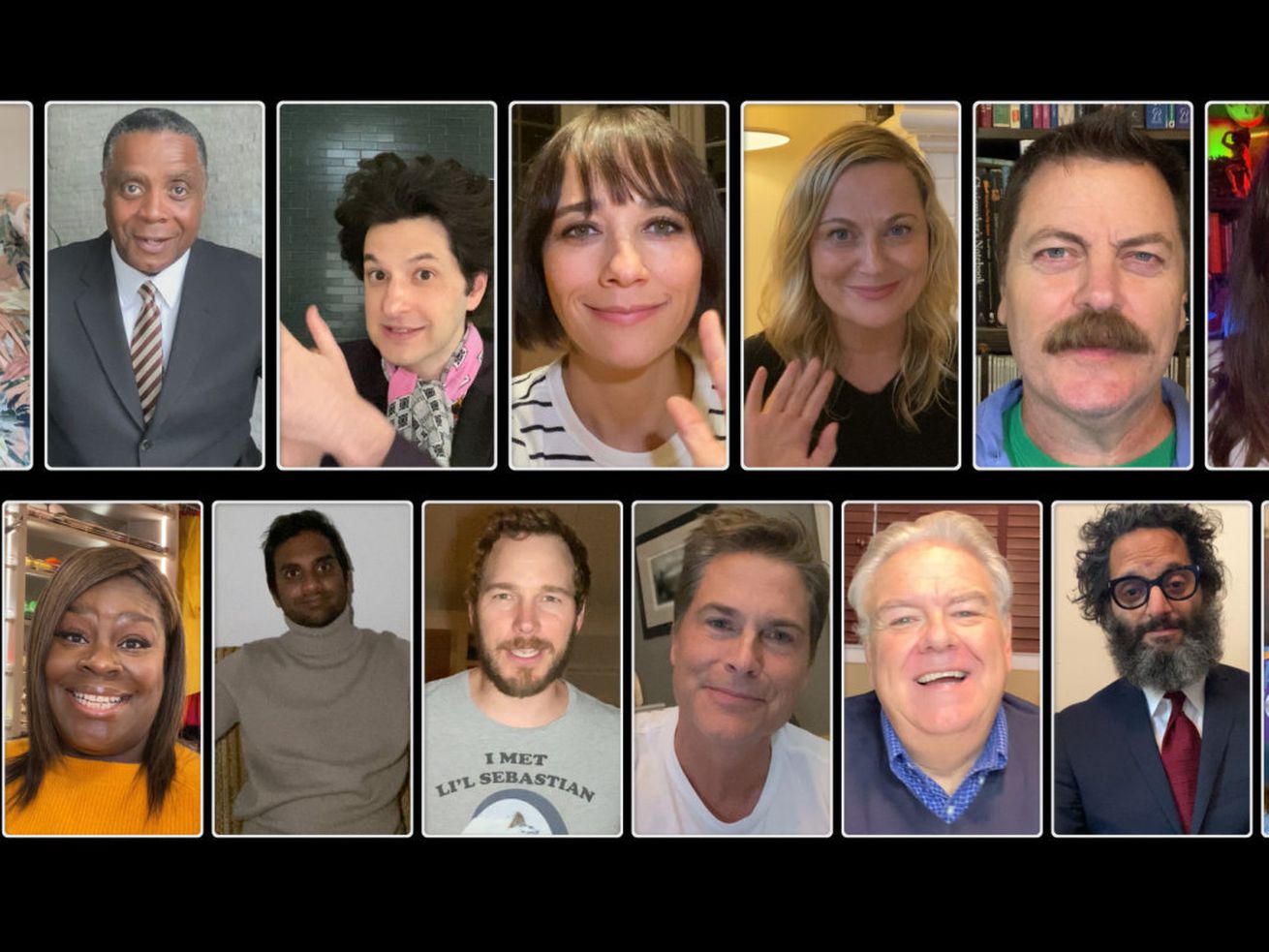 The cast of Parks and Recreation reunited for a special designed to raise money for the charity Feeding America. | NBC

It’s even more proof that great TV probably can’t be made in quarantine.

The Parks and Recreation reunion special — in which the entirety of the show’s regular cast (sans poor Mark Brendanawicz) and a healthy portion of its recurring guest stars collaborated to film a new episode of the show while in quarantine — was so, so, so much better than I ever could have expected it to be.

It was also pretty significant proof that American scripted television production can’t be consistently and dynamically made during the Covid-19 pandemic. The special was a fun experiment that showed the absolute limitations of such an experiment. (I have somewhat high hopes for the upcoming One Day at a Time animated special, but it’s not like that’s a pivot the show can make on an ongoing basis.)

I did not tune into Parks and Rec’s special excited to see my favorite characters again. Though I liked the show, I’m happy enough to leave it in the past, where it feels increasingly like a weird relic of the Obama era.

But I was excited to see how some of the smartest minds in TV writing, led by showrunner Michael Schur, would tackle the problem of presenting an entire episode of television like a Zoom conference call and making it engaging and interesting.

To tell you the truth, they mostly didn’t. The special was frequently amusing, and I couldn’t help but feel warmth toward its charitable goals. (It was created to raise money for Feeding America.) But it never solved its central issue: how to tell a story in this format. And if some of the best minds in all of TV can’t solve that, how can anyone else be expected to do so?

The central idea of this special is that Leslie Knope, feeling isolated from her friends in a time of social distancing, is making sure everyone reaches out to each other every day in a video chat phone tree. (In a sweet gesture, the characters speak frequently of the mental health strain of people having to be cut off from each other for so long.)

As Leslie calls Ron, and Ron calls April and Andy, and so on and so forth, the special both makes lemonade out of the “we had to shoot all of this without high-grade equipment” lemons and allows for everyone in the well-known cast — including movie star Chris Pratt — to appear onscreen. Each actor shows up for maybe five minutes, tops. It’s easy to see how the special was pulled together so quickly.

It also seems to have taken inspiration from a somewhat unlikely source: the recent duo of Saturday Night Live episodes produced with the cast sequestered at home. In and of itself, this isn’t remarkable. SNL is the highest-profile program to have produced any new episodes since quarantine began, and Schur is an SNL veteran himself. But what’s interesting is the way the special seems to have taken structural cues from the sketch comedy.

If you look at the special as an episode of a sitcom, it mostly falls flat. The story, such as it is, barely exists, and its big moment of emotional catharsis involves all of the characters performing a song from the show’s best season, in an ending the special doesn’t remotely earn. But if you think of the special as a collection of comedic sketches starring the Parks and Rec characters, it hangs together much better.

I think that’s why many of my favorite moments came from the assorted fake advertisements and news programs featuring some of the show’s many recurring players. The return of Perd Hapley (Jay Jackson) was exactly the burst of weirdo energy the special needed, and I even found myself enjoying characters I didn’t like all that much on the series. Jon Glaser’s Jeremy Jamm dominated some of my least favorite scenes of the show, but when he turned up in the special for a quick joke about offering a dental delivery service, it played more like something out of an offbeat comedy sketch than anything more substantial. And as a throwaway, it worked.

It’s a canny acknowledgment that when you’re telling stories via the limited cinematic capabilities of (simulated, I assume) video-conferencing software, you kind of have to go big and broad and not worry about storytelling nuance. (I was reminded, throughout, of multi-camera sitcoms, which have a similar relationship to a more limited cinematic palette.) Every character is their most self, and all of the gags are gags you remember liking when the show was still on, which is not all that dissimilar from how SNL operates — big and broad and full of callbacks.

But this special is also a big reminder that much of what made Parks and Rec work was the chemistry between the members of its ensemble, chemistry that necessarily cannot exist in a world where they’re all far away from each other. The special takes great pains to explain why its many different couples are not quarantined together, in ways that mostly make sense. But hearing those explanations just made me remember how much I liked watching Aubrey Plaza and Chris Pratt work together. TV is built atop actor chemistry, and the special was an inadvertent reminder of just how difficult it can be to sustain viewers’ interest when that chemistry isn’t there.

Will other shows do anything similar? I don’t know. I’d love to see a few of them try. I feel like Community — a sitcom that always turned limitations into strengths — would thrive in this format, and I think it would be fun to see the It’s Always Sunny in Philadelphia gang turned loose on Zoom. (They’d almost certainly become the world’s most incompetent porn bombers.) But I don’t want to see too many more shows produced in this fashion. The Parks and Rec special was a lot of fun as an experiment. I don’t want to see it become the new normal.

The Parks and Recreation special is streaming on NBC, Hulu, YouTube, and Peacock. To donate to Feeding America, go here.