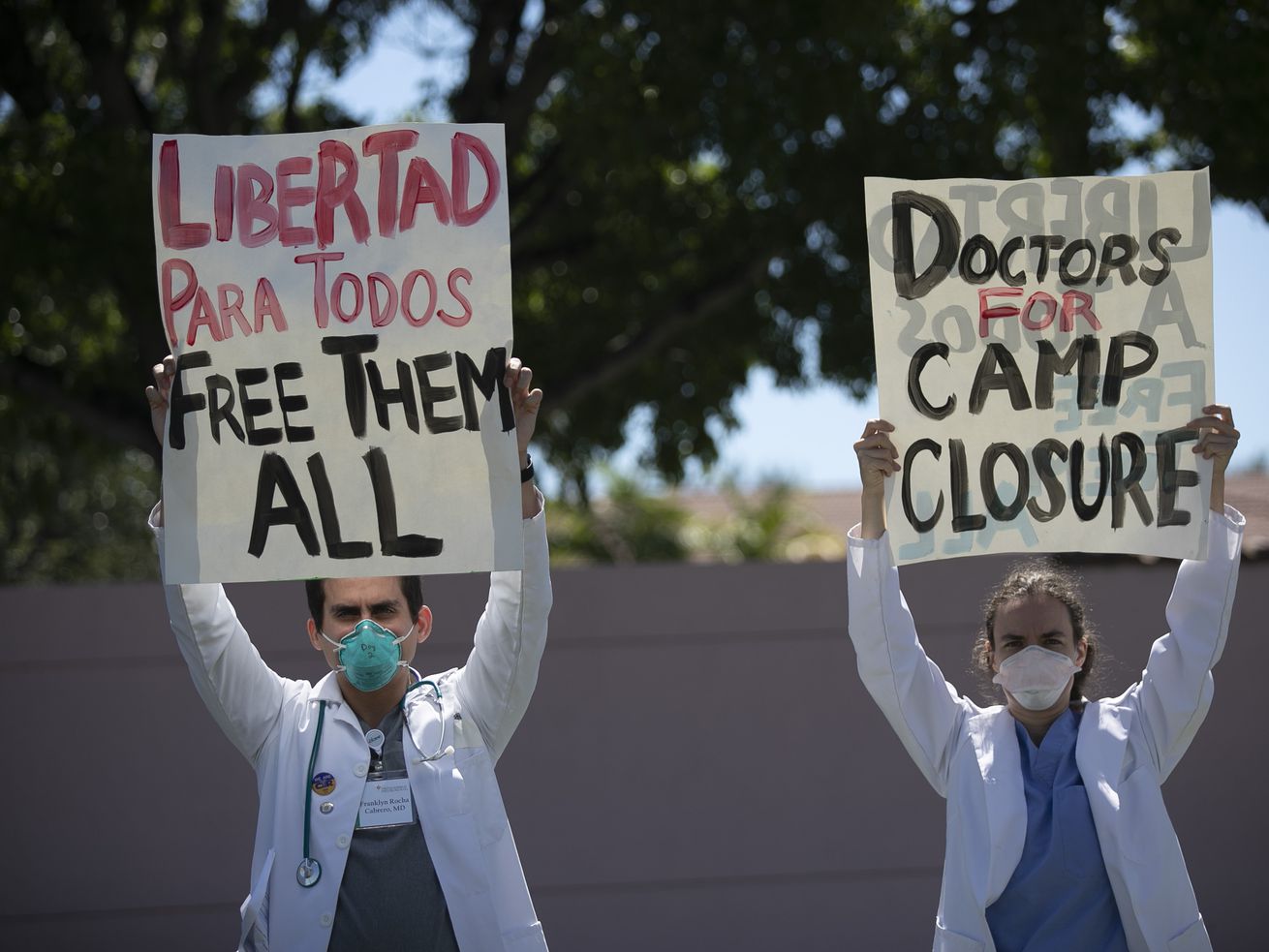 Doctors protest outside a detention center in Pompano Beach, Florida, on May 1 to demand that ICE release immigrants from detention and ensure they receive testing and treatment for the coronavirus. | Joe Raedle/Getty Images

The latest developments suggest that a whistleblower complaint from a detention center nurse is part of a broader pattern.

US Immigration and Customs Enforcement is facing allegations that women detained at one of the agency’s facilities in Ocilla, Georgia, underwent unnecessary gynecological procedures, including hysterectomies.

The allegations began with a nurse, Dawn Wooten, who filed a whistleblower complaint on Monday that cited concerns about a seemingly high number of hysterectomies performed on immigrants detained at the facility.

Multiple women have since come forward with firsthand accounts of their procedures. One former detainee, Pauline Binam, had her Fallopian tube removed without her consent, according to her attorney and medical records shared with Vox. The Associated Press identified another three women on Friday who were subjected to surgeries and other procedures that they allegedly “never sought or didn’t fully understand.”

On Wednesday, Rep. Pramila Jayapal, the vice chair of the House immigration subcommittee, said in a statement that she had been briefed by three attorneys representing detainees at the facility. At minimum, she said, 17 or 18 people held at the Irwin County Detention Center had been subjected to unnecessary gynecological procedures — often “with the clear intention of sterilization” and without obtaining proper consent.

“It has become painfully clear to me that the initial reports … are likely part of a pattern of conduct,” Jayapal said.

Many of the details of the allegations against the Georgia facility are still emerging, and both ICE and the private operator of the facility have called for skepticism of the complaint, which relies on secondhand accounts of the hysterectomies that were allegedly performed. It still isn’t clear to what extent ICE and the medical staff involved sought the detainees’ consent to perform those procedures or whether they were medically necessary.

The accusations, which echo the ugly history of coercive sterilization in the US, have sparked widespread outrage — including calls for formal investigations. In a statement Friday, ICE Acting Director Tony Pham said, “If there is any truth to these allegations, it is my commitment to make the corrections necessary to ensure we continue to prioritize the health, welfare and safety of ICE detainees.”

But this is far from the first time that ICE, the federal agency charged with enforcing immigration law in the US, has been accused of neglecting immigrants’ health and safety, especially amid the coronavirus pandemic.

“I don’t think this is necessarily a systemic sterilization by ICE. I think this is the kind of thing that is allowed to flourish in the course of poor oversight and terrible, inhumane conditions of confinement,” Sarah Owings, an attorney for one of the detainees, told NBC.

The complaint describes one gynecologist as a “uterus collector”

The initial disclosed complaint, filed by a nurse, Dawn Wooten, in cooperation with a coalition of immigrant rights groups led by nonprofit activist group Project South, said female detainees had been subjected to a troublingly high number of hysterectomies while in custody at the Georgia facility.

As first reported by Prism, the procedures were allegedly performed by Mahendra Amin, a gynecologist associated with Coffee Regional Medical Center and Irwin County Hospital in Georgia. In 2015, Amin and several other doctors reached a more than $500,000 civil settlement with Georgia prosecutors to resolve allegations that they submitted fraudulent claims to Medicaid and Medicare.

Wooten is quoted in the complaint about the doctor: “We’ve questioned among ourselves, like, goodness he’s taking everybody’s stuff out. … That’s his specialty, he’s the uterus collector.”

But the detention facility, which is operated by the private prison contractor LaSalle Corrections, continued to send patients to him.

According to Wooten’s complaint, the detainees, many of whom have limited English skills, were allegedly sent to a gynecologist outside the facility who performed the hysterectomies, often without them fully understanding why they were getting the procedure done. One woman was told it was because she had a “thick womb” or “heavy bleeding,” even though she had never experienced heavy bleeding or been told by a doctor previously that she had a thick womb, according to the complaint.

BuzzFeed reported that ICE informed lawmakers Tuesday that the detention center had only “referred” two detainees for hysterectomies to outside health care providers since 2018, and that the procedures had been approved by the facility clinical authority. Still, it’s possible that detainees could have received hysterectomies without being specifically referred for the procedure.

Several attorneys representing detainees who had been treated by Amin came forward with similar allegations on Tuesday. One attorney, Benjamin Osorio, told NBC News that Amin performed hysterectomies on two of his clients that they think may have been medically unnecessary.

Hysterectomies can be commonly used to treat noncancerous growths in the uterus that contribute to heavy periods and painful sex as well as endometriosis, pelvic support issues, abnormal uterine bleedings, chronic pelvic pain, and gynecologic cancers. But the American College of Obstetricians and Gynecologists advises that, depending on a patient’s condition and comfort level, they may “want to try other options first that do not involve surgery” or see if the condition improves on its own first, waiting to perform the hysterectomy until a woman no longer wants to bear children.

Detainees were also subject to other invasive gynecological procedures, including one woman who allegedly had Fallopian tube removal without her consent, which will likely make it harder for her to conceive in the future. (Though it’s not clear whether Amin performed those procedures.)

The complaint raises questions about whether the detainees who had hysterectomies could give informed consent, given that many of them do not speak English and the detention center did not always use translators to communicate.

One detained immigrant, who was not named in the complaint, told Project South that when she asked what treatment she was receiving before she was subjected to a hysterectomy, she was given different answers by three different people: a doctor, a corrections officer transporting her to the hospital, and a nurse at the detention center. (It’s not clear whether she had help from a translator in communicating with them or whether she was sufficiently English-proficient to understand them.)

In an interview with the Intercept, which first reported the complaint, Amin said he had performed medical procedures on detainees with the consent of the detention center but had only performed one or two hysterectomies in the last two to three years. He did not disclose whether detainees had received those hysterectomies.

His lawyer, Scott Grubman, later “vigorously denied” the complaint’s allegations in a statement, saying Amin has “dedicated his adult life to treating a high-risk, underserved population.

Lawmakers have been racing to verify the allegations in the complaint

Members of Congress have called for investigations into the complaint.

On Tuesday, Rep. Bennie Thompson (D-MS), chair of the House Committee on Homeland Security, announced that the committee would examine the allegations in the complaint as part of an investigation concerning conditions at ICE detention facilities run by private contractors.

“The allegations put forth in this whistleblower complaint point to an alarming pattern of unsafe conditions and a lack of oversight at privately-run ICE facilities,” he said in a statement. “The complaint alleging hysterectomies have been performed on women held in detention without consent is incredibly disturbing.”

And on Wednesday morning, 173 members of Congress urged the DHS OIG to open a separate investigation into the allegations and report back by September 25.

“The reports of mass hysterectomies cause grave concern for the violation of the bodily autonomy and reproductive rights detained people,” they wrote in a letter. “Everyone, regardless of their immigration status, their language, or their incarceration deserve to control their own reproductive choices, and make informed choices about their bodies.”

ICE spokesperson Lindsay Williams said in a statement on Tuesday that the agency does not comment on complaints like Wooten’s that are filed with the Department of Homeland Security’s Office of the Inspector General (OIG), a government watchdog.

“That said, in general, anonymous, unproven allegations, made without any fact-checkable specifics, should be treated with the appropriate skepticism they deserve,” Williams said.

Scott Sutterfield, a spokesperson for LaSalle, also rebutted the complaint’s allegations and “any implications of misconduct” at Irwin in a statement Tuesday, accusing Wooten and the organizations that filed the complaint of pushing “long-held political objectives.”

“LaSalle Corrections has a strict zero tolerance policy for any kind of inappropriate behavior in our facilities and takes all allegations of such mistreatment seriously,” he said.

This is not the first time that Project South has raised concerns about human rights abuses at Irwin: A report released by the organization in 2017 found that the center wasn’t feeding detainees enough and serving them spoiled food as well as paying them less than $1 a day to do voluntary work that helped them pay for more food and phone access, which was prohibitively expensive. Detention Watch Network has similarly raised concerns about the health and safety of detainees at Irwin.

And while the complaint filed Monday concerns a single detention center, it reflects a broader pattern of abuses that occur in immigration detention, particularly in facilities operated by private prison contractors.

Concerns about health and safety have only been heightened by the coronavirus pandemic. Immigrants across the US have been fighting for their release from ICE detention, alleging insufficient measures to protect them from the coronavirus. Six detainees have died from Covid-19 and almost 5,800 have contracted the virus since February.

There have been reports of personal protective equipment shortages, insufficiently frequent cleaning of public spaces, a lack of enforcement of social distancing guidelines, and failures to isolate new arrivals to detention centers and people exhibiting symptoms of Covid-19 at detention centers across the US.

Wooten’s complaint was primarily concerned with similar failures at Irwin, but her allegations about the alarmingly high number of hysterectomies has sparked the most public outrage.

One woman, Wooten said in the complaint, was supposed to have a single ovary removed, but the gynecologist accidentally took out the wrong one and then gave her a total hysterectomy.

“She still wanted children — so she has to go back home now and tell her husband that she can’t bear kids,” Wooten said.