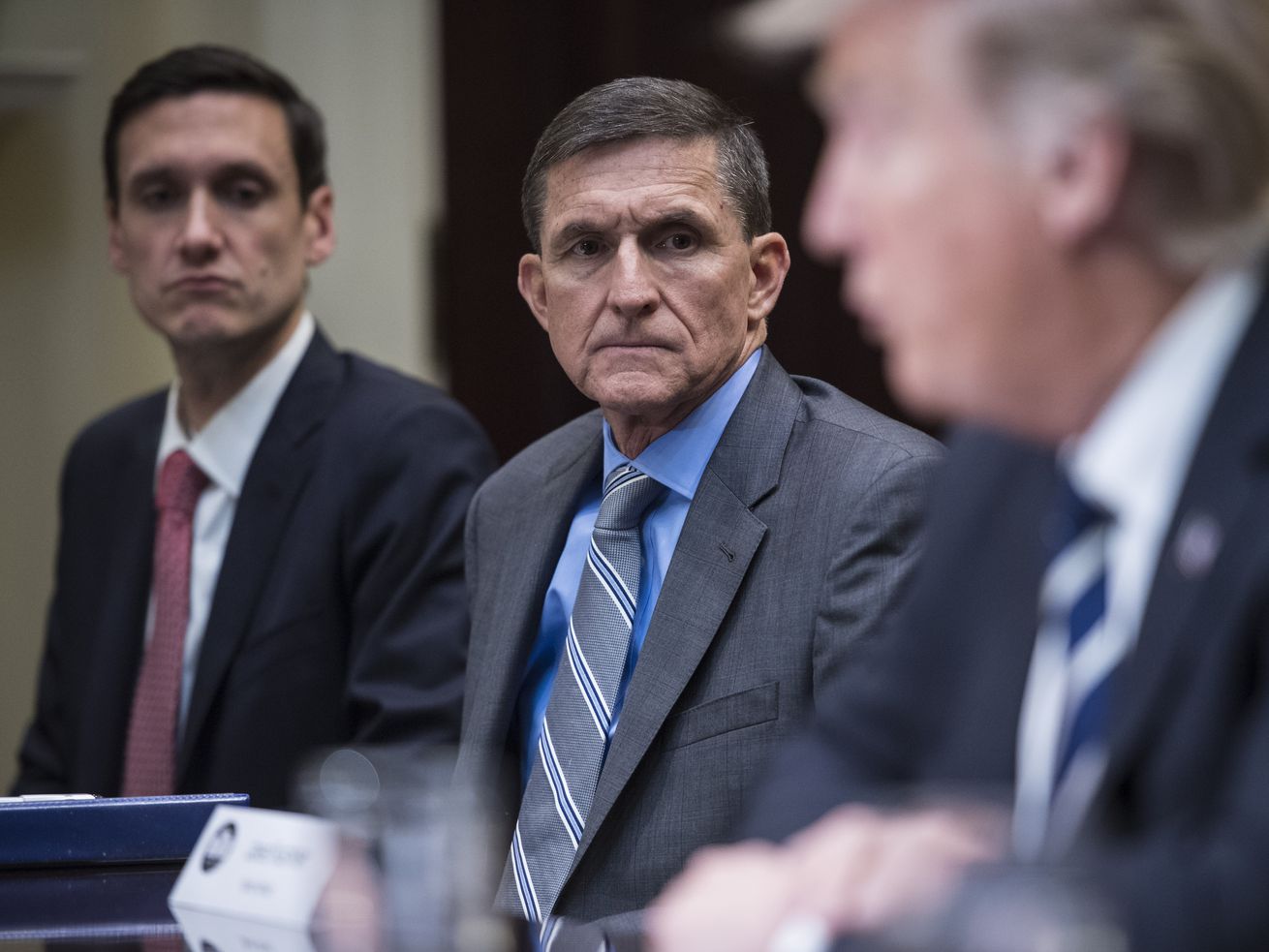 Trump claims they’re a “total exoneration” for his former top adviser. They aren’t.

President Donald Trump on Thursday seized upon new developments in the Michael Flynn case to reinvigorate his pet conspiracy theories about Obama-era law enforcement and intelligence community officials conspiring to bring him down.

“What happened to General Michael Flynn, a war hero, should never be allowed to happen to a citizen of the United States again!” Trump thundered on Twitter.

What happened to General Michael Flynn, a war hero, should never be allowed to happen to a citizen of the United States again!

Trump’s latest string of tweets about the Flynn case came days after he retweeted a post from Fox Business host Maria Bartiromo teasing that “sources tell me @GenFlynn will be completely exonerated this week. It was a total fraud. A Set up.” Suffice it to say nothing that has emerged this week delivers on that promise.

First, some brief backstory. After being fired from his position as head of the Defense Intelligence Agency by President Obama in 2014, Flynn cozied up to Russia and became one of Trump’s more prominent campaign surrogates. Trump ignored advice Obama gave him during their November 2016 White House meeting and tapped him to be his first national security adviser — but Flynn planted the seeds of his own undoing before he even started the job by having secretive communications with Russian officials during the transition period.

Now, however, Trumpworld wants you to believe that Flynn was a victim — and is using newly released documents to make the case.

.@CNN doesn’t want to speak about their persecution of General Michael Flynn & why they got the story so wrong. They, along with others, should pay a big price for what they have purposely done to this man & his family. They won’t even cover the big breaking news about this scam!

Posting a bunch of vindictive tweets about how he overcame the forces arrayed against him may have served as a pleasant distraction for a president besieged by the coronavirus pandemic and the human and economic carnage it has produced. But a close look at the context of what Trump is saying about the new Flynn revelations reveals it’s not all he’s framing it to be.

At issue are newly released documents detailing how top FBI officials handled a key January 24, 2017, interview with Flynn, who at the time had just started his brief, ill-fated tenure as Trump’s national security adviser.

FBI leadership was already aware at that time that Flynn had phone calls with then-Russian Ambassador Sergey Kislyak during the presidential transition period. In those calls, Flynn advised Kislyak not to respond to new sanctions the Obama administration placed on Russia for interfering (on Trump’s behalf) in the just-completed presidential election. Intercepts of Flynn’s conversations with Kislyak raised concerns within the bureau that Flynn had violated the Logan Act, a law that prohibits unauthorized citizens from negotiating with foreign governments.

The newly unsealed documents, which were released by Flynn’s lawyer on Wednesday and are the first fruits of Attorney General William Barr’s investigation of the Flynn investigation, indicate that FBI officials debated how to question Flynn about his contacts with Russia and whether their aim was to get him to admit any wrongdoing.

In one handwritten note that Trump and his backers in Congress and on Fox News are trumpeting as a bombshell, Bill Priestap, then the FBI’s head of counterintelligence, wrote, “What’s our goal? Truth/Admission or to get him to lie, so we can prosecute him or get him fired? If we get him to admit to breaking the Logan Act, give facts to DOJ & have them decide. Or, if he initially lies, then we present him [redacted] & he admits it, document for DOJ, & let them decide how to address it.”

#FLYNN docs just unsealed, including handwritten notes 1/24/2017 day of Flynn FBI interview. Transcript: “What is our goal? Truth/Admission or to get him to lie, so we can prosecute him or get him fired?” Read transcript notes, copy original just filed. @CBSNews pic.twitter.com/8oqUok8i7m

On that same piece of paper, Priestap wrote, “If we’re seen as playing games, WH [White House] will be furious. Protect our institution by not playing games.” Another note says, “We regularly show subjects evidence, with the goal of getting them to admit their wrongdoing. I don’t see how getting someone to admit their wrongdoing is going easy on him.”

None of this may seem like a big deal. But to Trumpworld, it’s evidence that Flynn was set up by “dirty cops” who were already resolved at that early date to bring Trump down.

Trump even went as far as to retweet a post from his son Donald Trump Jr. calling for the imprisonment of FBI officials involved in the case.

What this effort to portray Flynn as a victim ignores is not only that the FBI already had evidence that he may have broken the law at the time the notes were written, but also that Flynn did lie to FBI officials during the January 24 interview, saying that he and Kislyak did not discuss sanctions.

Flynn resigned as national security adviser in February 2017 amid reports that the DOJ had caught him in this lie. He was ultimately prosecuted by the office of special counsel Robert Mueller, pleaded guilty, and cooperated with Mueller. But now, after copping to wrongdoing, Flynn is seeking to withdraw his plea.

While Trump now seems to believe that Flynn didn’t do anything wrong, he once acknowledged in 2017 that he brought his legal troubles on himself by lying to a bunch of officials about his Russia contacts.

I had to fire General Flynn because he lied to the Vice President and the FBI. He has pled guilty to those lies. It is a shame because his actions during the transition were lawful. There was nothing to hide!

Of course, Trump’s allegations that bias affecting the Russia investigation were already investigated by the Justice Department inspector general, who found it did not.

Trump is already lying about the FBI’s Flynn notes

It’s hard to assess the full significance of the Priestap notes without more context. While Trumpworld and Flynn’s lawyer are hyping it up as smoking gun evidence of FBI misconduct, former US attorney and FBI congressional liaison Greg Brower told CNN that “To the extent this is being advertised as evidence of something nefarious, I certainly don’t see it in that way. … I don’t know what this means and I don’t know that it’s important at all.”

What we do know is that Trump is lying about them. During a press availability on Thursday, Trump claimed that the notes show the FBI was “trying to force [Flynn] to lie.” But they show no such thing — all they show is that officials debated how aggressively and on what grounds to confront Flynn about his Russia contacts.

Trump claims the newly released Michael Flynn documents show that the FBI was “trying to force him to lie.” They show no such thing — all they show is that agents deliberated how aggressively to confront Flynn about contacts with Russia that he later lied about. pic.twitter.com/DR23F6WJql

Nonetheless, in another lie, Trump added that “if you look at those notes from yesterday, that was total exoneration.” He wouldn’t even close the door to Flynn’s possible return to the administration.

There’s precedent for Trump spiking the football over out-of-context bits of information. Recall that he spawned an entire conspiracy theory out of selective readings of text messages between former FBI lawyer Lisa Page and FBI agent Peter Strzok, even though read in context they are clearly informal musings between two people who were having an affair and happened to dislike him.

But for a president who continues to flail in response to a deadly pandemic he wasn’t prepared for that has now killed more Americans than the Vietnam War, the opportunity to pivot back to a day of bashing the “deep state” is likely a pleasant diversion. And it sets the stage for another news cycle that Trump will relish in the increasingly likely event he pardons Flynn.